Time is one of the building blocks of our life on Earth. It’s sometimes referred to as the fourth dimension, adding to the three dimensions of physical space.

However, it’s hard to see the time. Symbolic representations of time can help, whether they come in the form of instruments, we use to tell time or gods and goddesses associated with different aspects of time.

Past, Present, and Future

As described in dream symbolism of the number 3, humans tend to group things in threes. Regarding time, people often think of past, present, and future.

That said, astrologer Brian Clark described a clever exercise for understanding the distinctions between past, present, and future: print three copies of your astrological chart, and label one “Past,” one “Present,” and one “Future.” The point is that the same chart speaks to where you’ve been, where you are now, and where you’re going.

Although you may be living on a particular day in a particular year, your memory might drift back to things that happened in your past, and your imagination can wonder about what will happen in the future. Time is therefore both limited to specific moments and unbounded.

As physicist Albert Einstein said, “The distinction between the past, present, and future is only a stubbornly persistent illusion.”

Symbols of quantitative time have to do with how we track the passage of time on a practical level. These symbols of time are generally easy to interpret. They might show concern for punctuality or a fear that you won’t have time to do everything you want to do before you die.

Clocks measure time during the day. You may watch a clock at work or school, looking forward to your free time afterward. However, a ticking clock can symbolize running out of time — especially if it is part of a time bomb that is about to go off!

The Pink Floyd song “Time” features the sound of an alarm clock and talks about life moving quickly:

You are young and life is long, and there is time to kill today

No one told you when to run, you missed the starting gun 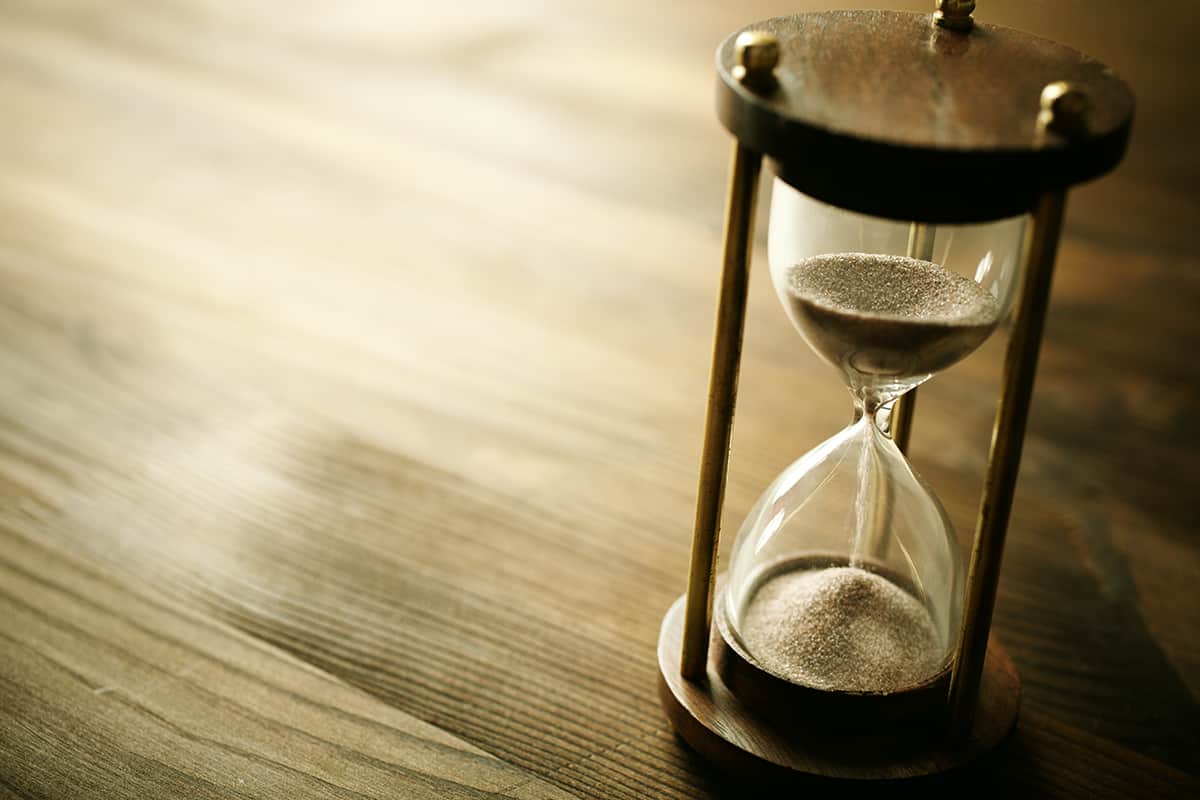 An hourglass is a simple sort of timer where sand takes a known amount of time to flow from the top chamber to the bottom chamber. This can symbolize time as finite or limited. It may especially refer to the idea of one’s lifespan being limited, that you only have so much time before you die.

On some computers, the cursor icon turns into an hourglass while you’re supposed to wait for the computer to complete a task. Unfortunately, the amount of time a computer displays the frustrating hourglass icon is not limited in the way a real hourglass is! 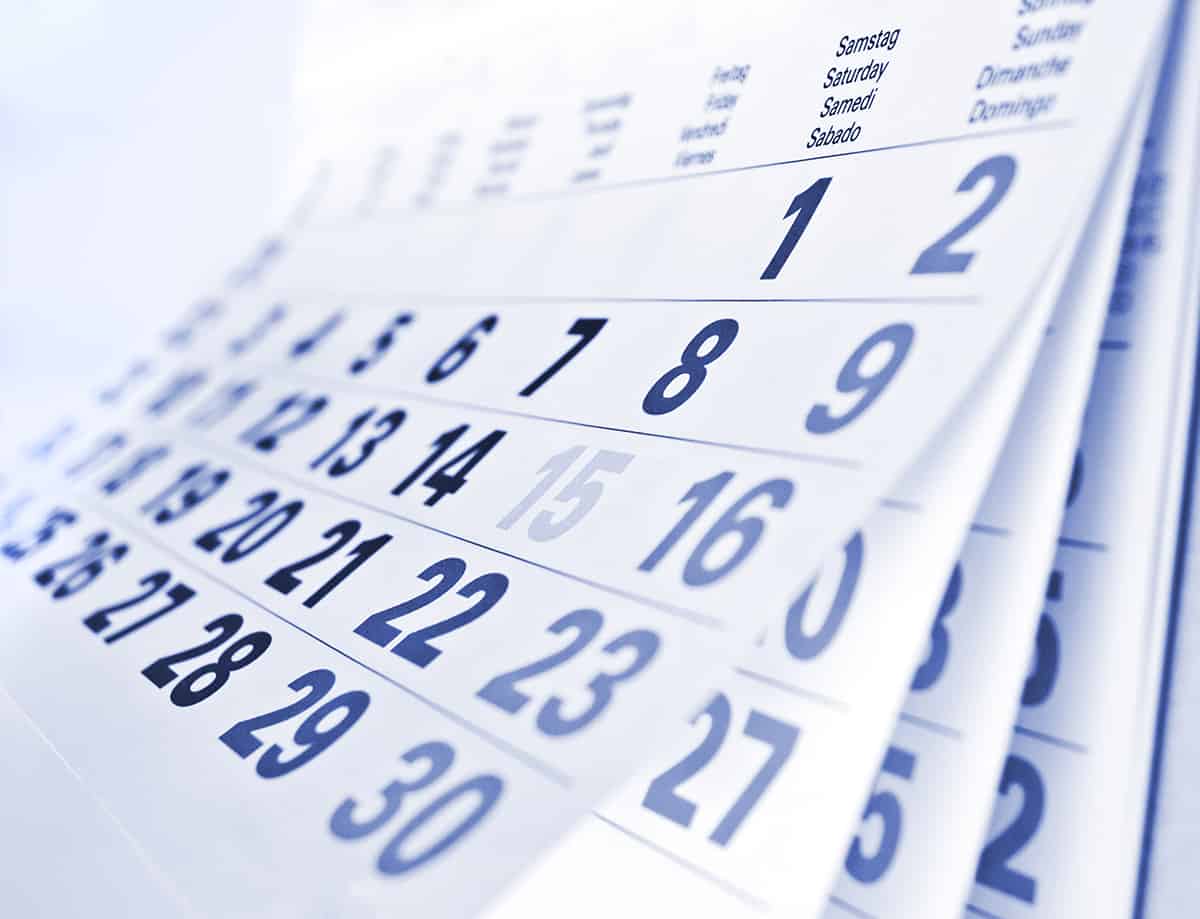 A calendar is a way of tracking time, usually over the course of the 12 months that make up a year. This could symbolize longer cycles, including the change of seasons.

The control of time represented by a calendar could make you feel powerful, as you can know what’s coming up and plan accordingly. However, you might also feel like your calendar controls you, if you don’t have room in your schedule to honor what you truly need at a given moment. 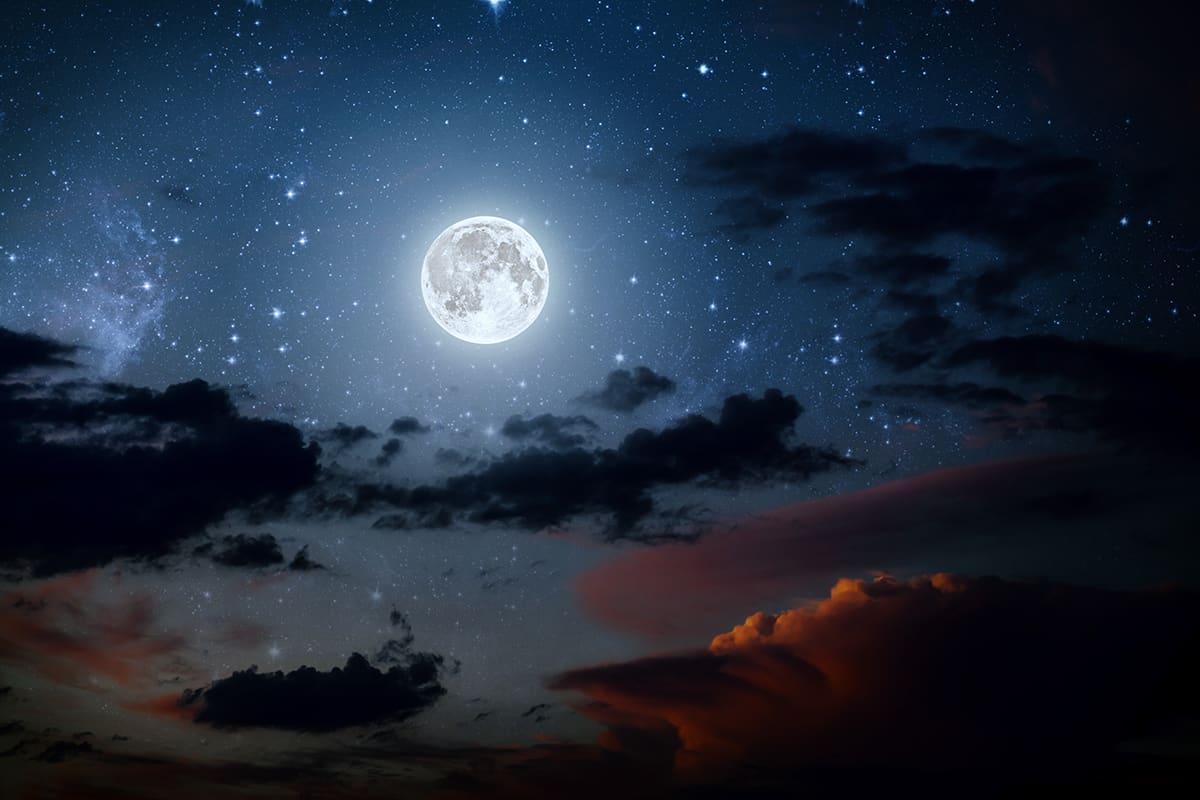 The cycle of the Moon is one of the most observable natural cycles. Every 29.5 days, just over four weeks, there’s a New Moon. At the halfway point between two New Moons, there’s a Full Moon. 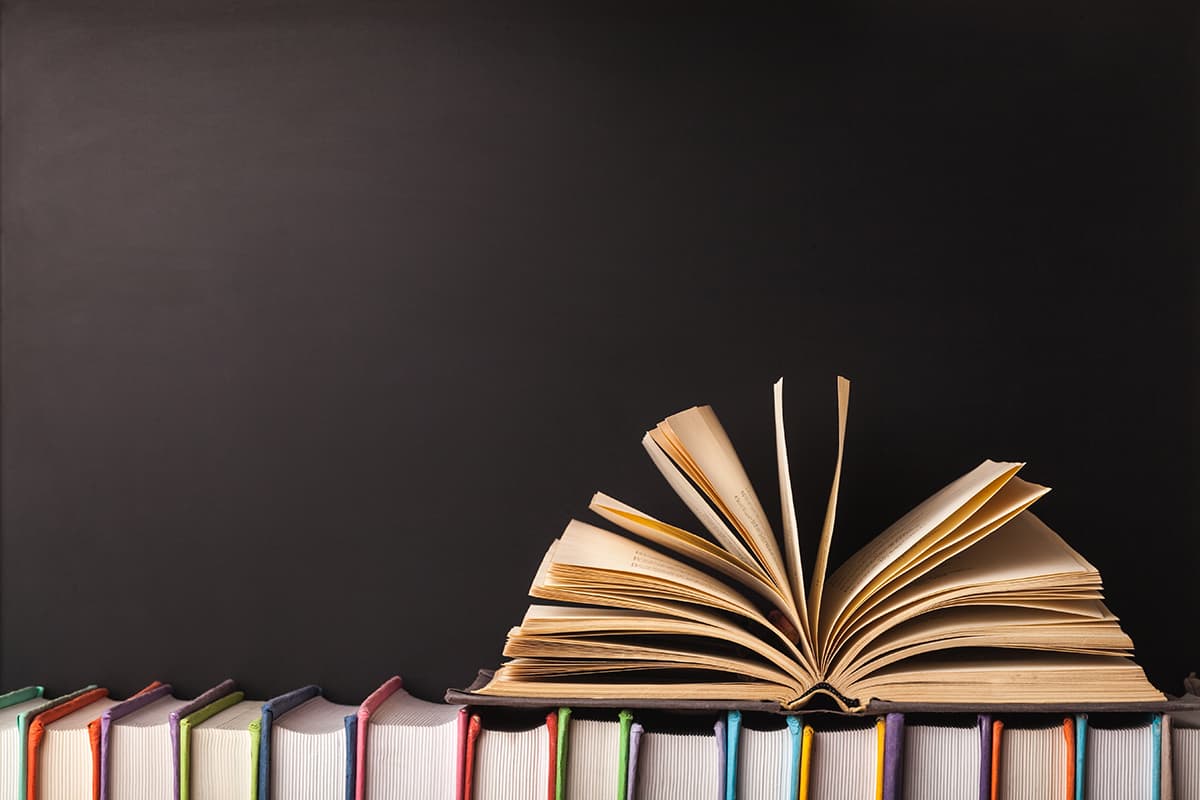 Books can record events that happened a long time ago, and they may do so with the sort of specific information used in quantitative time. However, they’re relevant to qualitative time in the sense of wondering whether you’ve accomplished anything worth recording for posterity.

Just keeping a journal or diary of your daily life can help you keep track of your growth over time. Journaling might also lead you to connections between present events and past memories or hopes for the future. See also book dream symbolism. 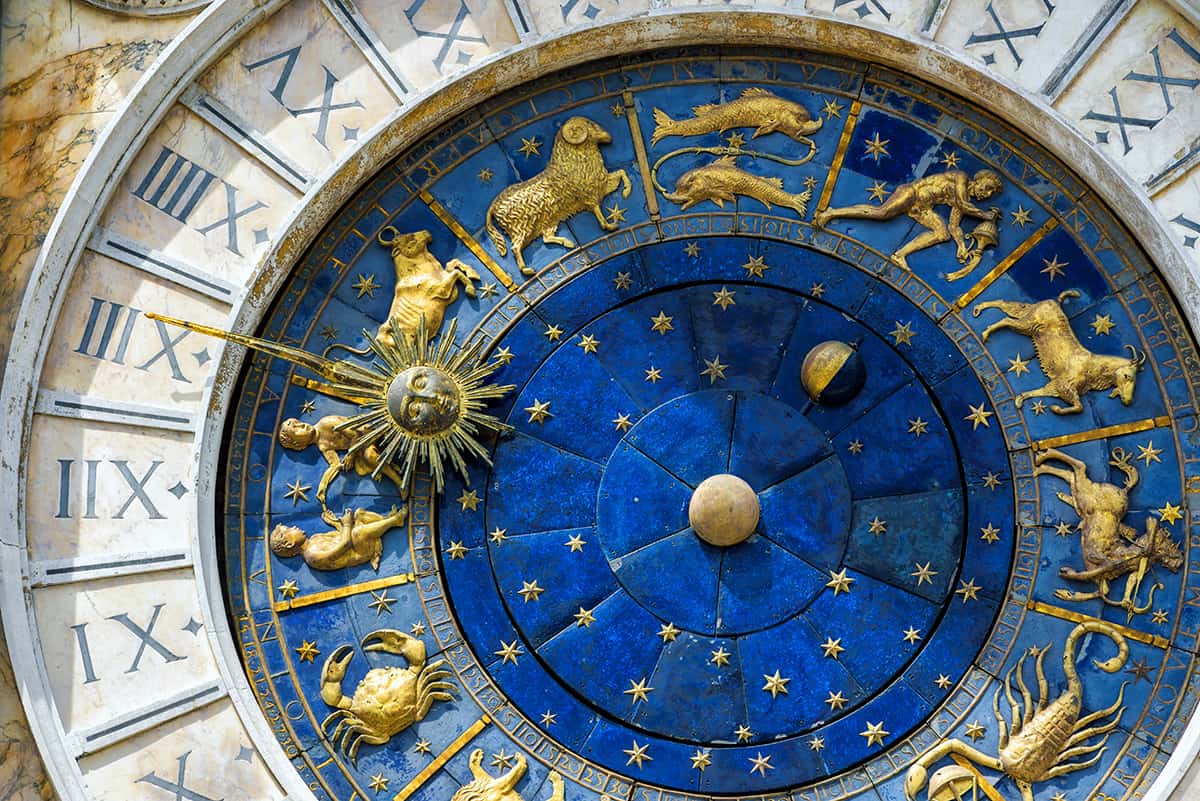 The twelve signs of the Zodiac can be a symbol of qualitative time, in the sense that astrology assigns meaning to the movement of the Sun and other celestial bodies through the signs.

While astronomers and astrologers generally agree with each other on the quantitative component of where the celestial bodies happen to be at any given time, the difference is that astrologers assign meaning and purpose to these positions, and astronomers do not. 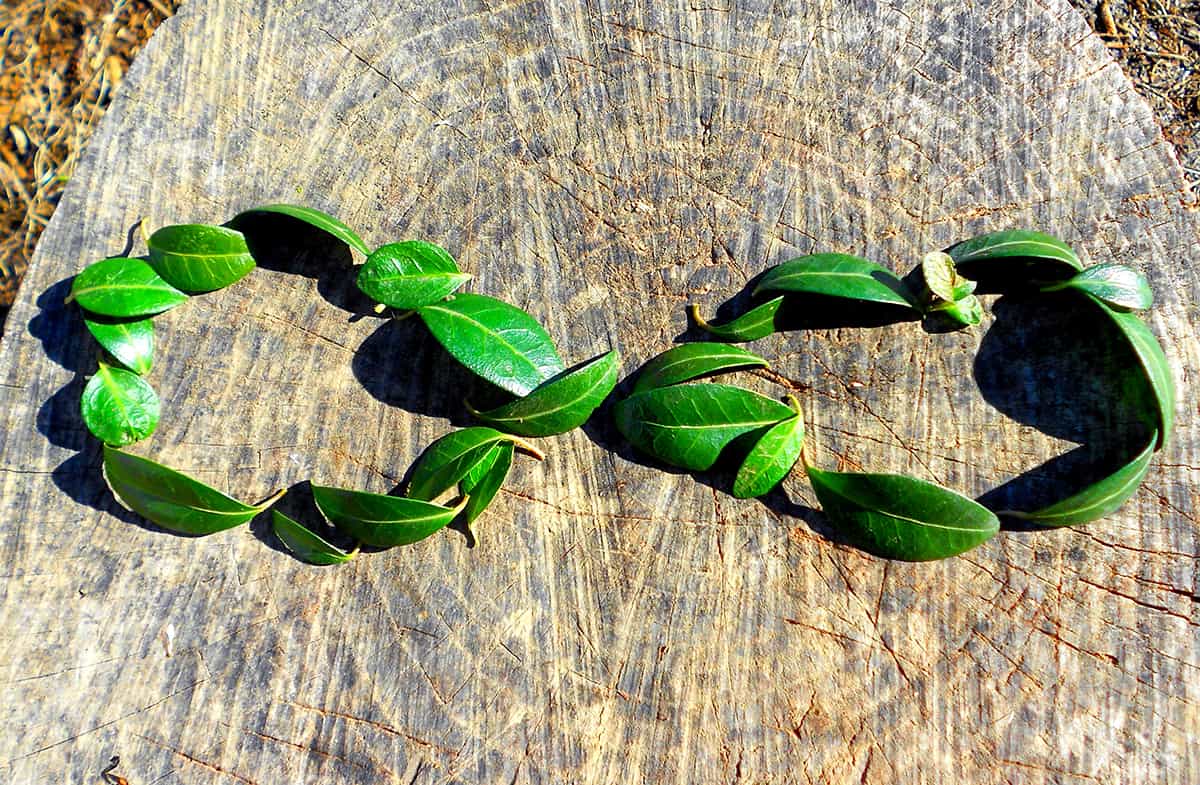 The infinity symbol, which is most commonly seen in a mathematical context, refers to any quantity that has no end. Although people have had various ideas over the years about what the end of the world might look like, there is, at this point, no known end to time. An infinity symbol can therefore be very appropriate to describe the vastness of time extending both backward and forward. 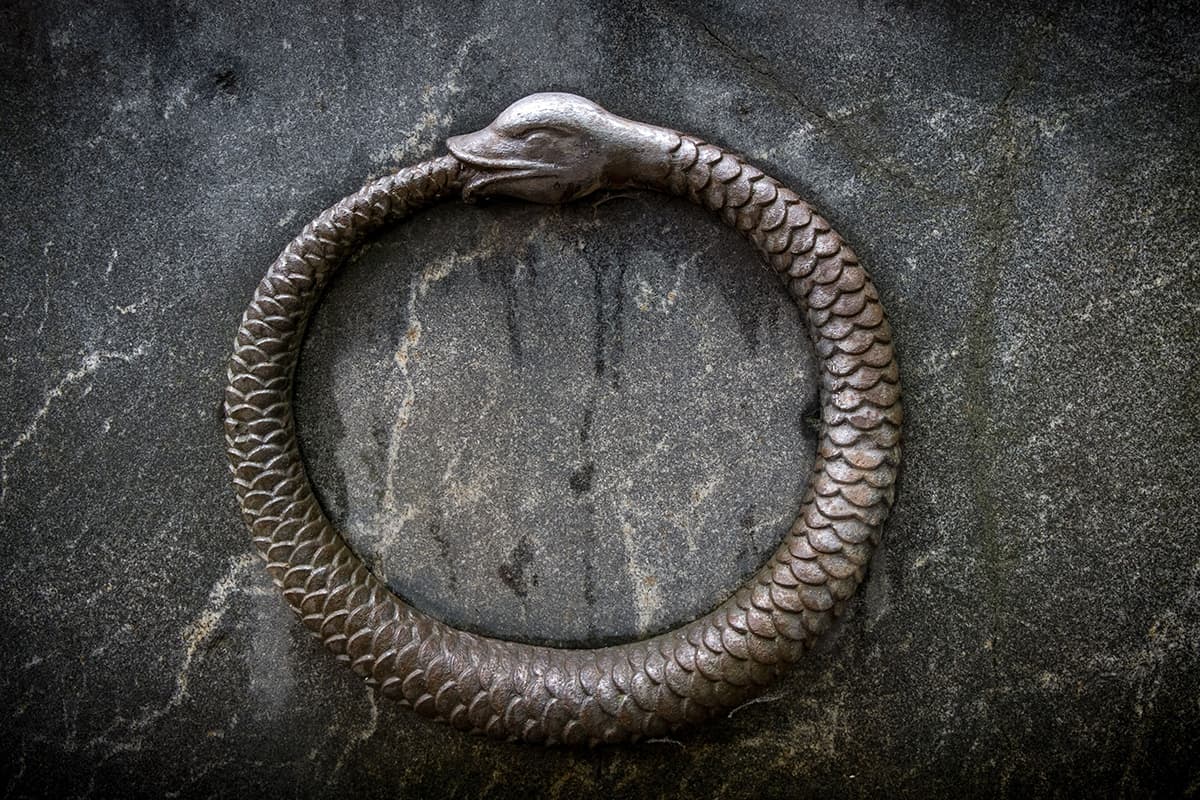 Sometimes the infinity symbol is seen as a variation of the ouroboros symbol. The ouroboros symbol is a primal image of a snake or dragon eating its own tail. It can be used as a fertility symbol, but it may also refer to a sense of internal completeness so thorough that you could fertilize yourself if you had to.

In the context of time, an ouroboros symbol might refer to a sense of timelessness, that primal content predating your ancestors is still present today. See also circle symbols and rebirth symbols.

Gods and Goddesses Associated With Time

Some religions have gods and goddesses associated with time. Their imagery can be regarded as symbols of time. They might also provide unique ways of looking at time.

Additional information on the Greco-Roman gods and goddesses associated with time is available in Brian Clark’s class through Astrology University, The Telling of Astrological Time.

Cronus (also spelled Kronos) is often associated with the astrological interpretation of Saturn, which involves restrictions and limitations — including those imposed by time.

The stories of Cronus given at the Theoi Project center on the theme of father-son conflict. Cronus, one of the Titans, castrated his own father, Uranus. He used a sickle to do so, so he’s often depicted holding a sickle.

When it came time for Cronus to become a father himself, he was spooked by a prophecy that he would be overthrown by his own son. Therefore, he swallowed each of his children as they were born. However, the youngest, Zeus, escaped and went on to become King of the Gods.

While all of this may sound creepy on a literal level, perhaps it makes sense as a metaphorical statement about the inevitability of aging. There is no way around one’s mortality and being succeeded by future generations, whether or not you personally have children. 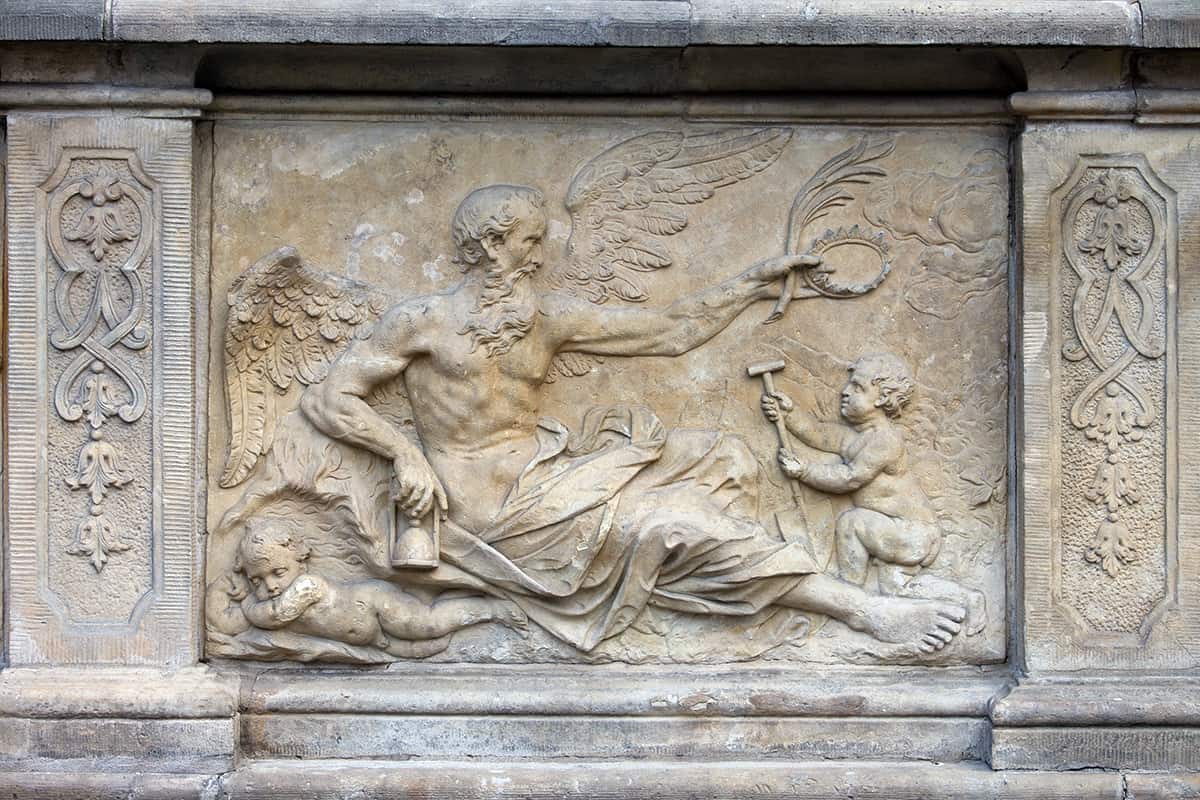 Chronos (also spelled Chronus or Khronos) was a personification of time in the ancient Greek Orphic tradition. The Theoi Project notes that he was sometimes seen as a double of Cronus. They both served as inspiration for images of Father Time still used today.

Adding to the confusion, Chronos was also sometimes depicted in mosaic form as Aion, or eternity personified, holding the wheel of Zodiac signs.

Minute Mythology reports that Chronos was associated with time that proceeded in a linear way, like past, present, and future. In contrast, Aion was linked with eternal time as well as cyclical time like the seasons.

Even if you don’t intend to become a scholar of Greek mythology, understanding this distinction between different approaches to time can help you maintain perspective in your life. While the linear, quantitative style associated with Chronos is necessary for getting things done on a daily basis, perhaps it’s a bit stressful sometimes. Zooming out to the bigger picture, like Aion might have done, may reveal what’s truly worth worrying about.

The Theoi Project notes that Kairos was the personified spirit of opportunity: “He was depicted as a youth with a long lock of hair hanging down from his forehead which suggested that Opportunity could only be grasped as he approached.”

This would be a good example of a qualitative approach to time — not just knowing what time it is, but knowing the right time to perform a particular task. 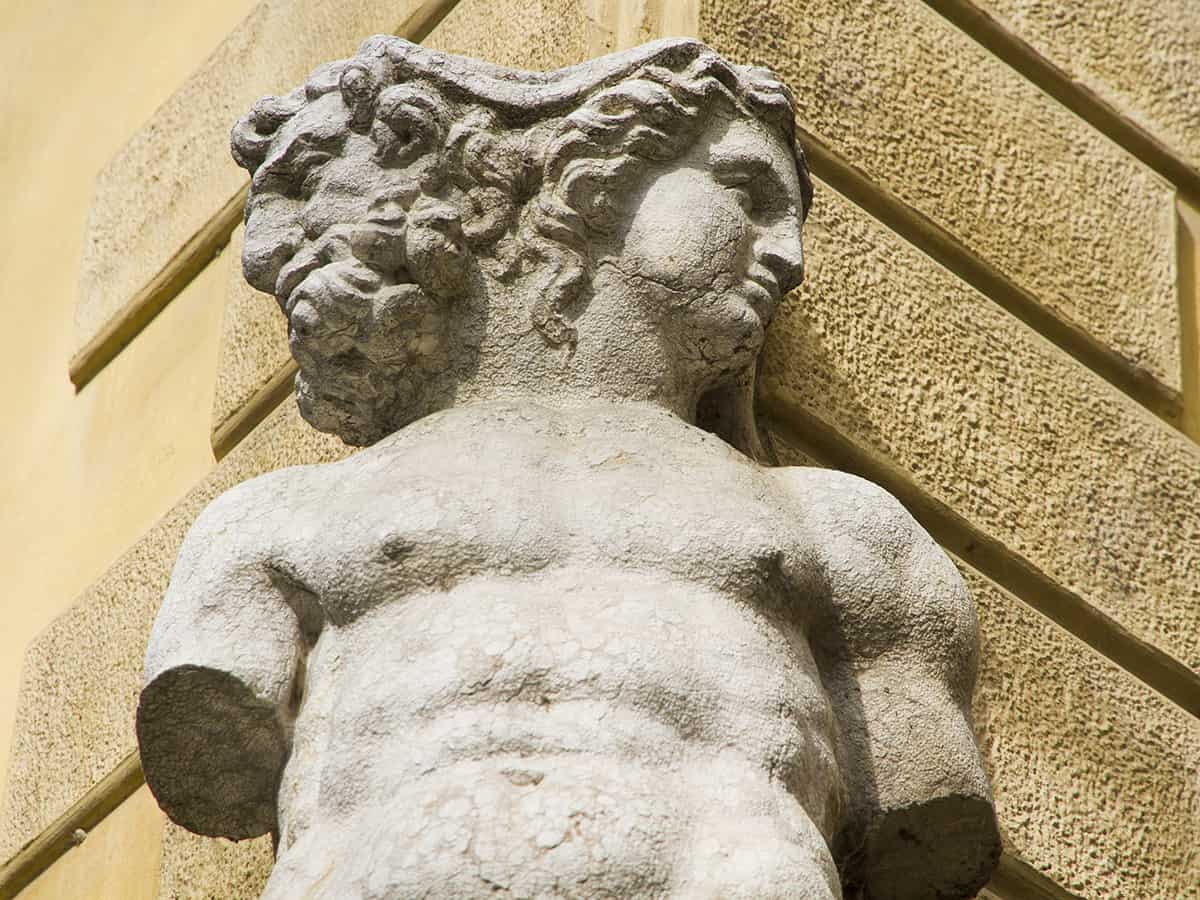 While many gods were common to both ancient Greek religion and the Roman religion after Rome conquered Greece, Janus was a Roman god of beginnings who did not have a Greek equivalent, according to World History Encyclopedia.

January, still the first month on today’s calendars, is named after Janus. Britannica notes that he was associated with the beginning of the day, month, and year.

The Conversation points out that the word “janitor” also comes from Janus, who was the doorkeeper associated with doorways and gateways. He had two faces, one looking forward and one looking backward — because every beginning is also an ending of whatever came before it.

The Horae were the goddesses of the seasons, according to the Theoi Project. They were often honored by farmers who relied on the positions of the stars to plant their crops. They were therefore associated not with the four seasons we know today, but rather with the conditions necessary for stable agricultural life: justice, peace, and order.

Mnemosyne, like Cronus, was a daughter of Uranus in Greek mythology, according to the Theoi Project. She was the goddess of memory and language. In a time when writing had not yet been introduced, she presided over the rote memorization necessary to preserve oral history. 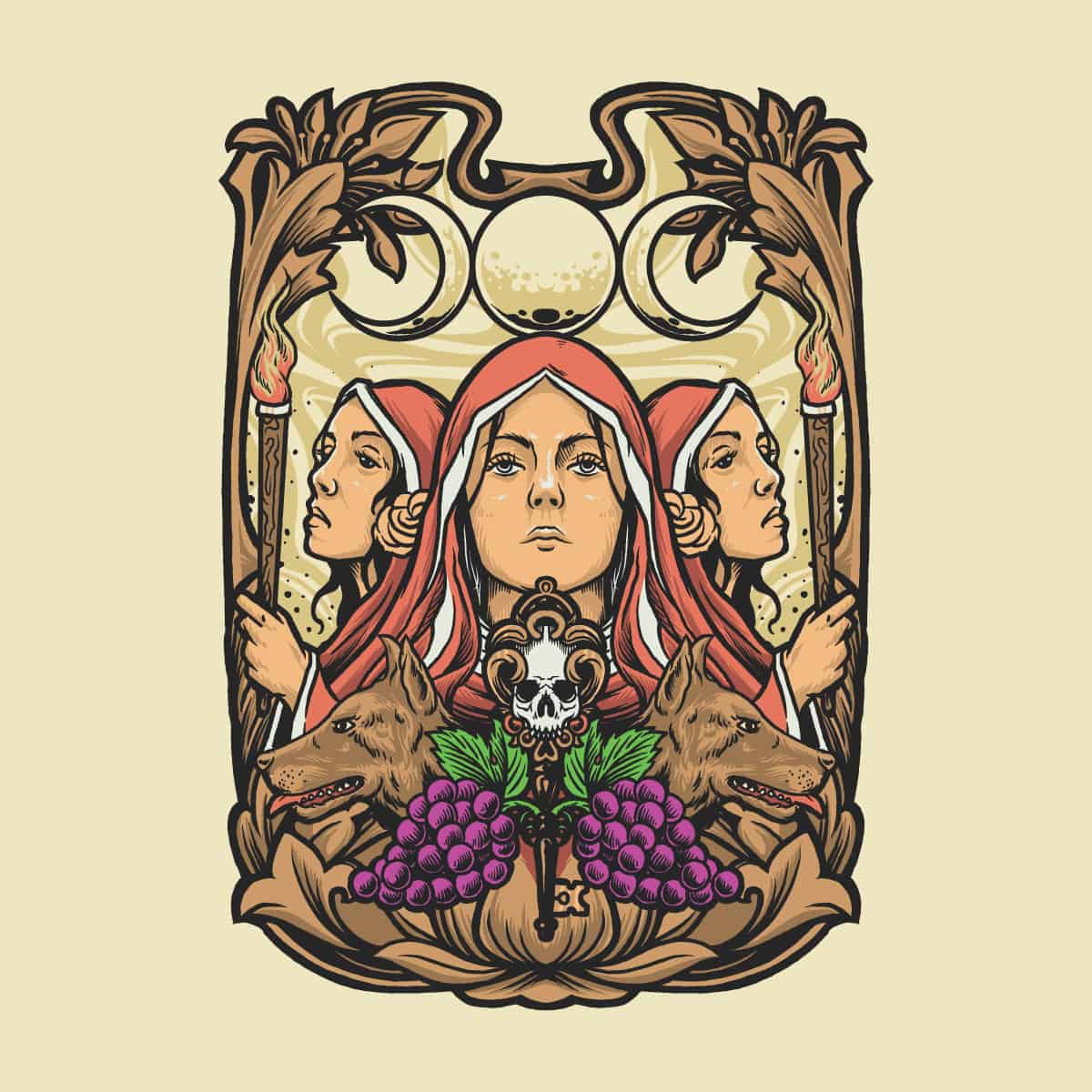 Triple Goddess symbolism depicts the three phases of a woman’s life as maiden, mother, and crone. While individual reproductive experiences may vary for many reasons, the general idea that people age over the course of their lives is not contested.

In this triad, Hecate represents the crone phase of life. She is a figure who has the wisdom that comes with age, and she is no longer concerned with some of the things that keep young and middle-aged adults busy. From that vantage, she can look at the big picture.

Hecate is also discussed in key symbolism, as she is a goddess associated with thresholds and transitions. Keys are often required to move from one physical space to another, so she is sometimes referred to as Keeper of the Keys.

World History Encyclopedia reports that Hindu goddess Kali, who is often seen as a destructive figure, is also the embodiment of time. Of course, the ravages of time are ultimately destructive to mortals, at least as far as their lives on Earth go.

The Hindu god Yama is the god of death, king of ancestors, and judge on the destination of souls, according to World History Encyclopedia. Because death ends one’s time on Earth, Hinduwebsite.com points out that Yama is also associated with time.

When you look at an old photograph of yourself, you might be able to clearly see that you’ve aged since then. Perhaps it’s easier to see the passage of time that way than to catch it while it’s happening. However, understanding symbolic representations of time can help you make an effort to engage with time thoughtfully on a regular basis.