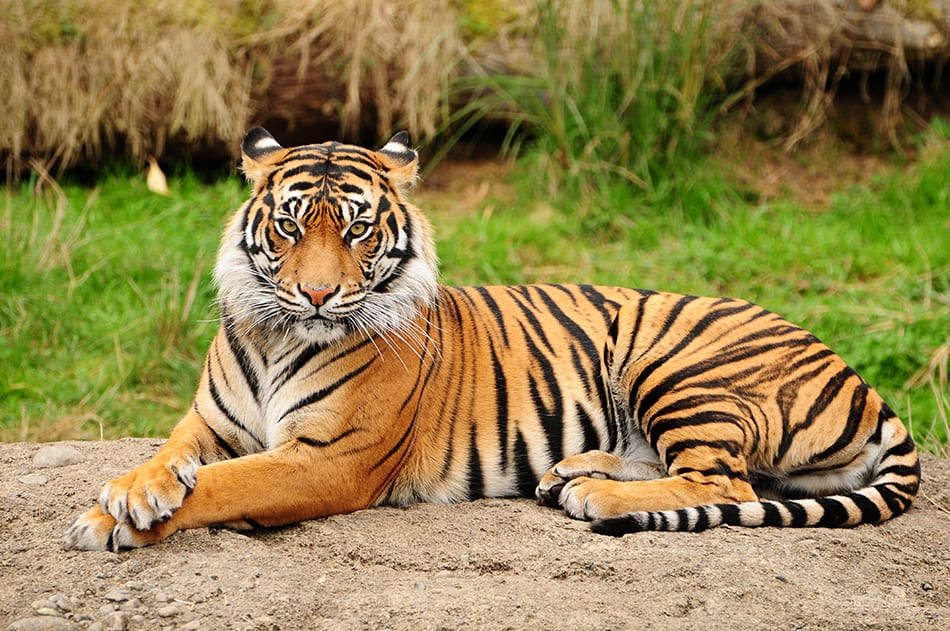 If you want to know the meaning and symbolism of a tiger, you need to know its characteristics. For example, tigers are solitary but social animals. Meaning, they often hunt alone, but they can interact with other tigers. Aside from that, they are also known as alpha predators. They prey on large animals or games. Based on these characteristics, we can say that a tiger is a symbol of strength. But, this animal has other meanings. To give you a better view, here are the most common tiger meanings and symbolism.

Tigers are alpha predators, and they don’t have any rivals in their natural habitat. Aside from that, tigers have powerful jaws, and they among the animals with the strongest bites. In fact, their bite is even stronger than the lion’s. Because of these characteristics, the tiger can stand for strength.

Tigers are courageous animals with unrivaled status. As such, they radiate confidence, especially over their territory or domain. For this reason, tigers can also mean courage and confidence. In fact, a tiger can remind us to believe in ourselves and be confident.

Tigers stand tall and mighty. Because of this feature, they garnered respect not only from other animals but from humans as well. Some people may even consider them as the “king of all animals.” As such, tigers can stand for majesty and nobility. In fact, in Japan and China, the alphabetical symbol they use for the word “king” looks like a tiger’s stripes, specifically the marking on the animal’s forehead.

Tigers are independent animals. To be specific, they prefer being alone, but they come together during mating season or when the female tiger is raising her young. Once the young tigers reach the age of two years old, they go on to live independent lives. For this reason, tigers can also stand for independence.

Tigers are territorial animals, and they will protect and guard their domain with all their might. Because of this characteristic, along with their strength, a lot of cultures around the world use this animal as a symbol of protection.

Typically, tigers are associated with death because they are known as predators. However, they can also stand for immortality. Some cultures, specifically in Asia, consider tigers as shapeshifters who are able to reincarnate from human to animal. Additionally, some cultures also believe that if you are killed by a tiger, your soul will continue living through the tiger.

When hunting, a tiger sits still while surveying his surroundings and waiting for the perfect time to attack his prey. This characteristic teaches us to be grounded in the present moment.

Tigers are excellent hunters, and they think on their own. Aside from that, they are able to come up with a good plan to catch their prey. Because of these characteristics, tigers can also symbolize cunning and shrewdness. 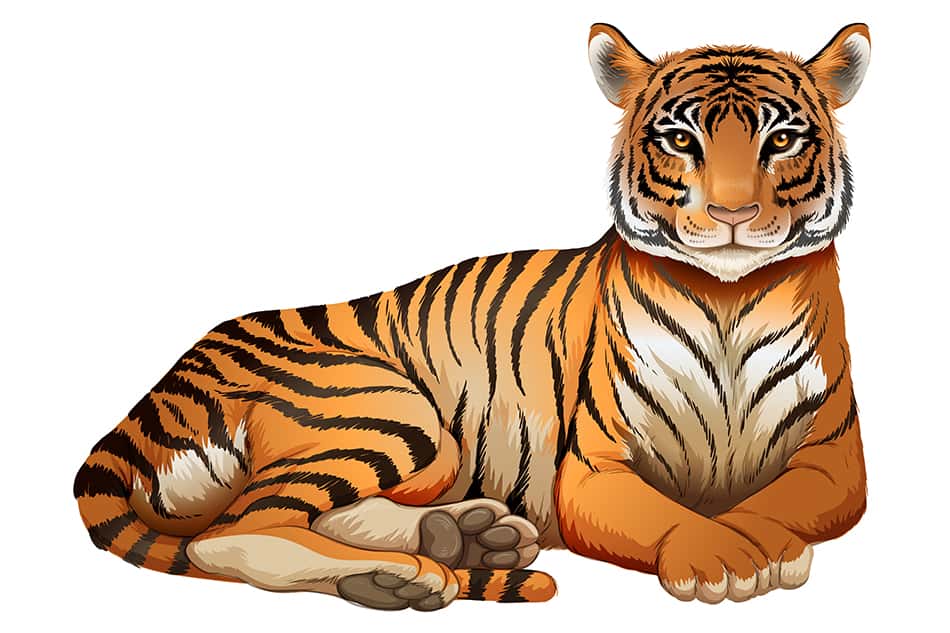 Animal symbolism is a major part of Native American culture. Even though the Native Americans don’t have tigers in their reservations, they consider tigers as special animals. For them, a tiger symbolizes power, courage, ambition, and strength. Additionally, the tiger also represents the release of fears.

Aside from those meanings, the Native Americans also consider the tiger as a great teacher. For them, the tiger also represents leadership. Plus, they also believe that an encounter with a tiger means that all trials had been resolved, and it is the perfect time to assert.

For the Native Americans, tigers are spirit keepers. Additionally, they also believe that this animal is clairvoyant. Lastly, they also use the tiger as a symbol of justice, integrity, and truth.

Christianity and Other Religions

In Christianity, the tiger symbolizes wrath, fearlessness, and royalty. While the tiger is not mentioned in the Bible, Christians typically use this animal to symbolize authority and luxury. In some instances, it can also represent revitalizing energies and supremacy.

In the Chinese religion, the tiger symbolizes war and high-ranking generals. Additionally, they also use this animal to represent the New Moon and darkness. In Hinduism, tigers became a symbol of a female deity.

Tigers are regarded highly in the East for their beauty and massive strength. In fact, carvings of tigers were discovered in the Indus Valley caves that existed thousands of years ago.

As mentioned, the tiger’s forehead markings resemble the Chinese character that means king. For this reason, children born in the Year of the Tiger had the symbol painted on their foreheads for strength, valor, and good health.

In South Korea, the white tiger is associated with the Mountain Spirit, and they used the tiger as a symbol of the Olympic games in 1988.

Ireland and Other Parts of Europe

For the Celtics, a tiger’s roar is a sign of an incoming storm and high winds because they believe that tigers roared when there is stormy weather to show their rage or displeasure.

Aside from that, the Celtic tiger has a powerful political meaning. In fact, Ireland was known as the Celtic Tiger from 1995 to 2007, the years when its economy was booming.

In various parts of Northern Europe, the tiger is considered a holy animal, and it is worshipped. Some people even call this animal the “Lord of the Black Rock.” Aside from that, they also believed that when a man is eaten by a tiger, the animal gets his spirit. Lastly, European poets associated the tiger with wine and romance because of its wild nature.

Although tigers are not native to Africa, they have symbolic meanings that are similar to other large cats like jaguars, cougars, leopards, and panthers.

In most African tribes, the tiger represents feminine power. Additionally, this animal can also symbolize beauty, speed, and ferocity. Also, it can be a symbol of protectiveness and aggression.

In several parts of Africa, they use the tiger as the symbol of a supreme animal image instead of the lion. Nevertheless, like the lion, the tiger is also a symbol of life and death.

Aside from those symbolisms, it is also believed in Africa that powerful shamans have tiger bodies. To be specific, they believe that the shaman’s soul enters a tiger’s body while he is sleeping. Once the sun shines, the shaman’s soul will return to his human body while the tiger goes to the forest to sleep.

All in all, African people worship the tiger and other large cats to prevent disaster, increase fertility, and regenerate life. 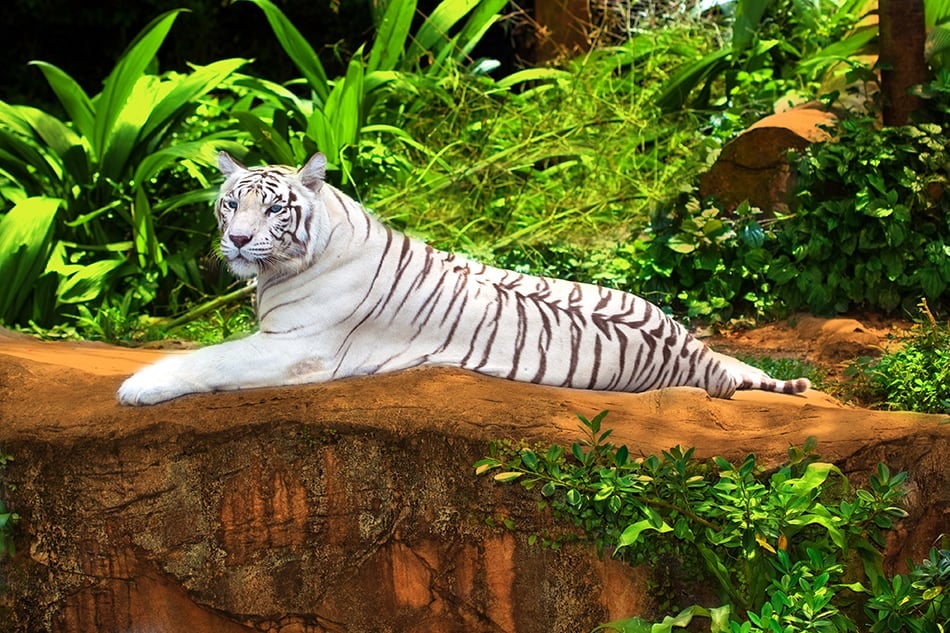 The white tiger is a type of Bengal tiger, and it has inspired a lot of ancient cultures.

In general, the white tiger symbolizes peace, courage, and virtue. Aside from that, this animal is known for its majestic fierceness and strength. As such, its power and serene energy can represent spiritual awakening and fearlessness.

The white tiger is a supernatural creature in Far Eastern astrology. For them, this animal looks over the western section of the sky. Aside from that, there’s also a legend about a white tiger in Japan. According to the legend, Byakko, the white tiger, is a celestial being and the guardian of the West. In the story, it was said that Byakko will appear in the sky if the current ruler is virtuous and he had brought peace to his land or domain.

Tiger as a Totem Animal 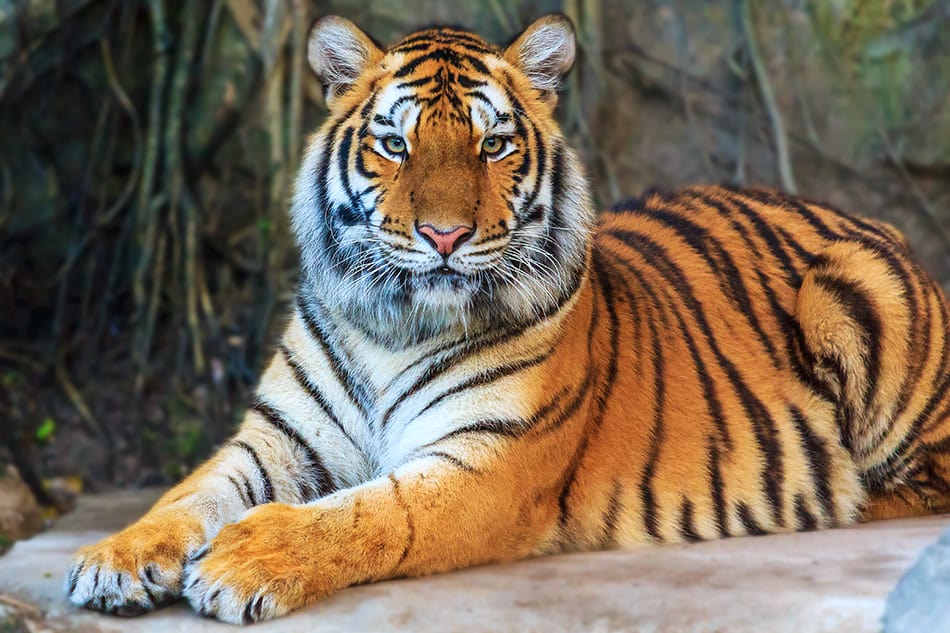 As a totem animal, the tiger is an ally that can help you develop and improve your senses, specifically the sense of sight and smell. Remember, tigers have a strong sense of smell and excellent eyesight. Aside from that, they also mark their territory with their scent. For this reason, the tiger as a totem animal is a reminder for you to take notice of the scents in your surrounding. By doing this, you will be able to interpret situations along with the safety of your environment.

Aside from that, the tiger totem animal is also a reminder for you to have confidence and courage. This animal tells you to live life confidently and independently. Additionally, this animal also indicates leadership. In fact, when a tiger visits you in a dream, or you saw a tiger symbol, it can mean that you are chosen as a leader because you can get things done.

A lot of Native American tribes believe that their totem animal is the tiger. Most members of the Tiger clan believe that the animal can protect them against evil. Additionally, they also believe that it will not kill them.

What Does It Mean If You Encounter a Tiger?

In Asia, specifically in India, they believe that an encounter with a tiger is a bad omen. For them, this animal is greatly feared. For this reason, they hunted tigers until they became endangered animals.

As mentioned, encountering a tiger symbol may mean that you are chosen to be a leader because you have the power and strength to get things done.

If you Encounter a Tiger in Your Dream 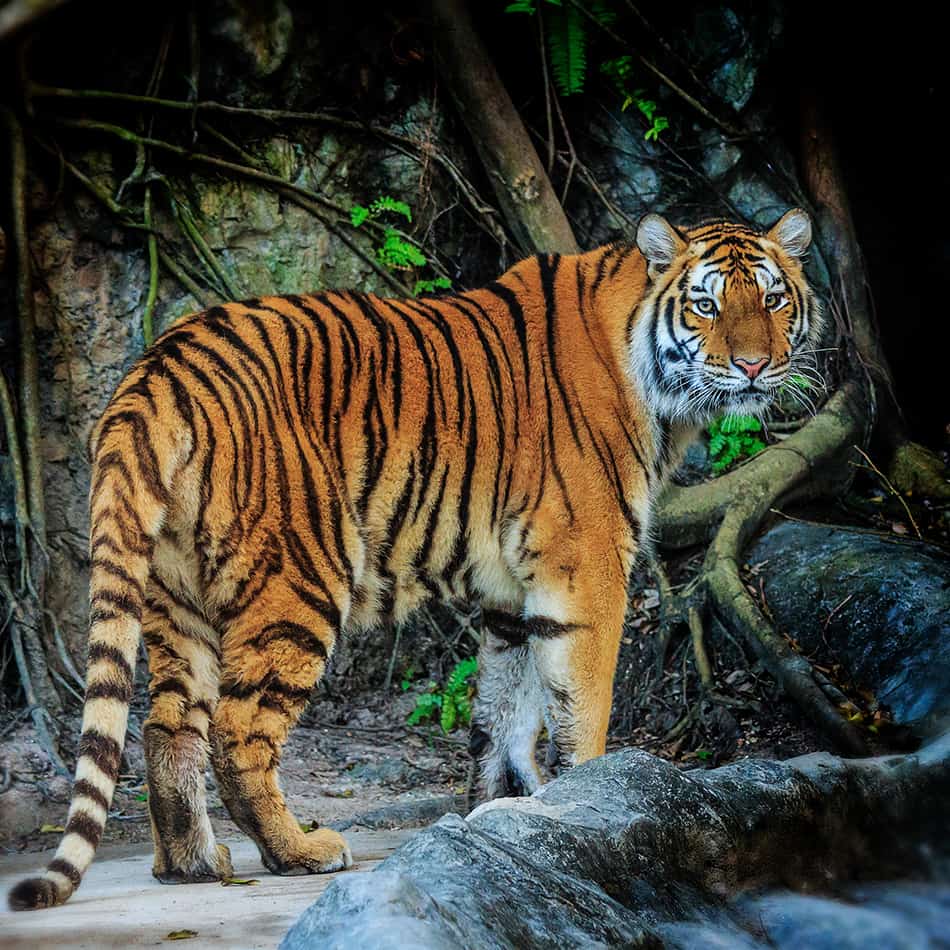 A dream about a tiger has various meanings, depending on the role of the tiger in your dream. For instance, an aggressive tiger may mean that you are currently facing some challenges in your life or other people are aggressive towards you. On the other hand, if the tiger is chasing you, it may mean that you are running away from the things that are making you uncomfortable. If this is the case, the dream is letting you know that you have the strength and power to face the challenges in your life.

A dream about killing a tiger has the same meaning as a dream of slaying a dragon. To be specific, this dream is letting you know that you are able to face your fears and the negative energies in your life. Aside from that, it may also mean that you have removed or conquered your bad habits.

If you dream about a protective tiger, it may mean that you should look within and find the strength to stand up for yourself. A friendly tiger, on the other hand, may indicate that now is the perfect time to take risks. 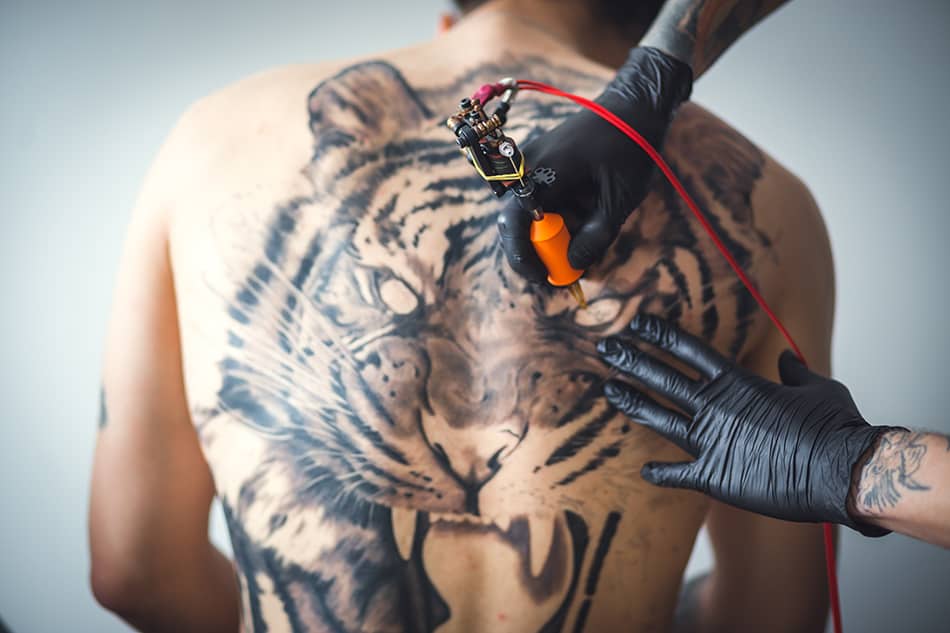 Tiger tattoos are popular, especially in Japan. Its popularity increased when Chinese artisans shared the images of the animal with the Japanese. As a result, the tiger tattoos in Japan were highly designed with expressive facial features and large eyes.

Typically, tiger tattoos are paired with a dragon not only in Japan but in Buddhism as well. For their meanings, the dragon represents the water while the tiger symbolizes the wind. When combined in a tattoo, it means the pairing of wind and water.

Aside from that, a tiger tattoo can also mean royalty and strength, especially if there are peonies surrounding the animal. A white tiger tattoo, on the other hand, may symbolize war.

As of today, there are various meanings for tiger tattoos. Because a tiger is flexile, its meaning is also flexible. For example, a tiger standing on a large rock will not only stand for the king of the territory. It can also represent the courage and strength that you have within you.

All in all, there are a lot of designs for tiger tattoos. Whatever design you pick, the tattoo will represent the various tiger characteristics that you have inside of you. Still, you have to carefully decide when picking a tiger tattoo design. You can also consult a tattoo artist when choosing the right design.