You may have seen a tattoo that looks like five ornate vertical lines. This design is called Hah Taew, and it is one common design used in Sak Yant, a style of tattooing done by Buddhist monks primarily in Thailand and the surrounding area. Each of the five lines in the tattoo is a Buddhist blessing.

What are Sak Yant tattoos? 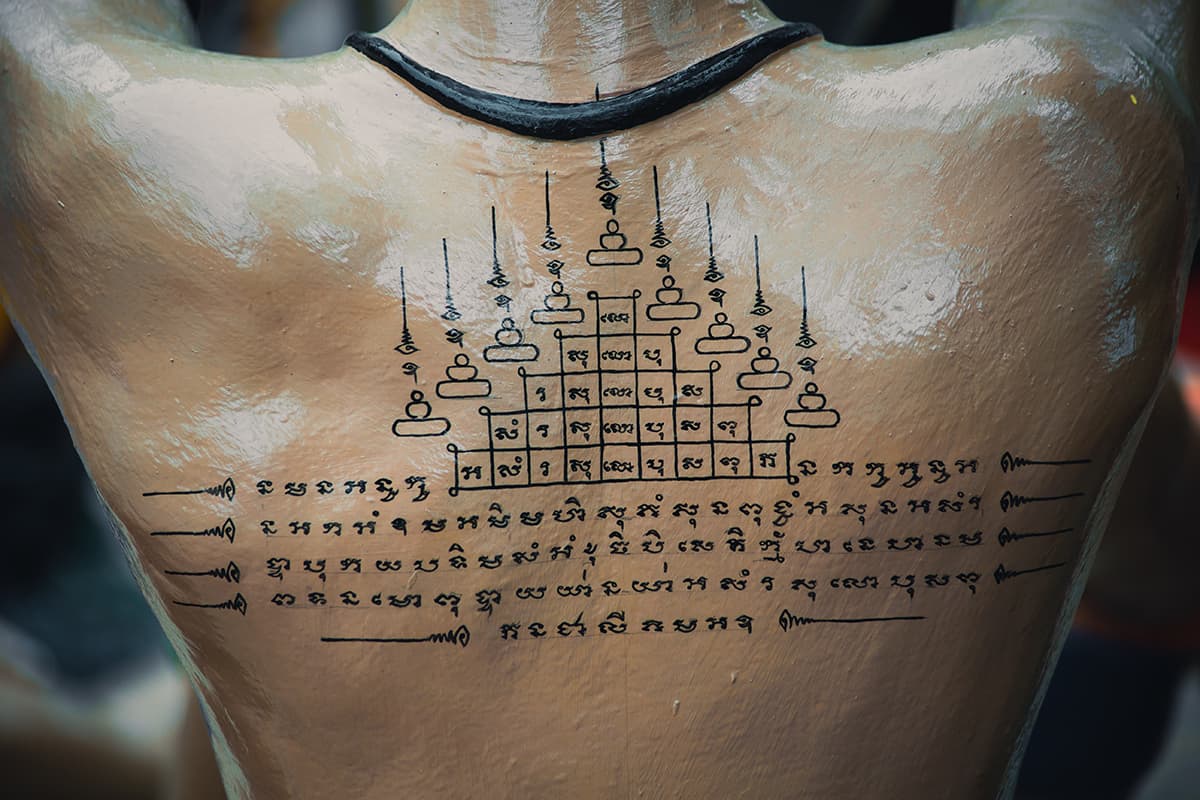 Sak Yant is a term for a style of sacred tattooing. It is also sometimes referred to as Yantra tattooing.

Tricycle, a Buddhist publication, notes that the blessings chanted while a Sak Yant tattoo is being inked can be used to mark one’s conversion to Buddhism. These blessings may also bind the wearer of the tattoo to a particular spiritual teacher or to follow various Buddhist rules.

True Sak Yant tattoo artists are therefore not just regular tattoo artists. Typically, they are current or former Buddhist monks as well. In addition to learning the technical skills necessary to ink tattoos, they must also learn the religious mantras associated with the tattoos.

Either way, there is an atmosphere of seriousness and exclusivity around Sak Yant tattoos. Sak Yant Chiang Mai points out that some images circulating online of the Sak Yant Hah Taew’s ornate five lines intentionally contain errors to prevent those who do not meet the spiritual qualifications to make a Sak Yant tattoo from doing so.

Culture Trip notes that Sak Yant tattoos were originally popular among warriors going back to the 9th century, in what is now Cambodia, for purposes of protection in battle. Sak Yant tattoos are still believed to hold great power.

While people who have Sak Yant tattoos are supposed to follow basic ethical rules to maintain the power of the tattoos, the power of the tattoos can also be recharged at events like the Sak Yant Wai Kru Festival. Expert Vagabond reports that this annual observance at Wat Bang Phra, a Buddhist temple near Bangkok, Thailand, involves prayers led by monks. Some attendees, especially those whose Sak Yant tattoos depict animals like tigers and monkeys, then go into a passionate trance state.

When and where did Sak Yant Hah Taew originate?

Sak Yant Chiang Mai reports that the traditional Sak Yant Hah Taew blessing was written by a Buddhist monk named Kruba Kam. This happened around the time the city of Chiang Mai was founded in the year 1296. Though Chiang Mai is now in Thailand, it was then part of the Lan Na kingdom, which Britannica notes was a center for the spread of Theravada Buddhism.

What do the five lines mean?

Each of the five lines of a traditional Sak Yant Hah Taew tattoo represents a specific blessing, as described at Sak Yant Chiang Mai. The purpose of each blessing, in order, is as follows:

Sak Yant Chiang Mai notes that some Sak Yant tattoo artists, known as Ajarns, have changed the wording of the original blessings. As Ajarn Noo Kanpai told National Geographic, “What you see nowadays from my sak yant art comes from my own ideas and designs that I adapted and created. They are my way of sharing my thoughts, beliefs, and values to the world through my art.”

Sak Yant Hah Taew tattoos also vary in the style of script used. Some use an ancient Khmer language called Khom, while other versions especially in northern Thailand use the Lanna language.

Sak Yant Hah Taew tattoos can be embellished with other features including lotus flowers and simple diamonds. 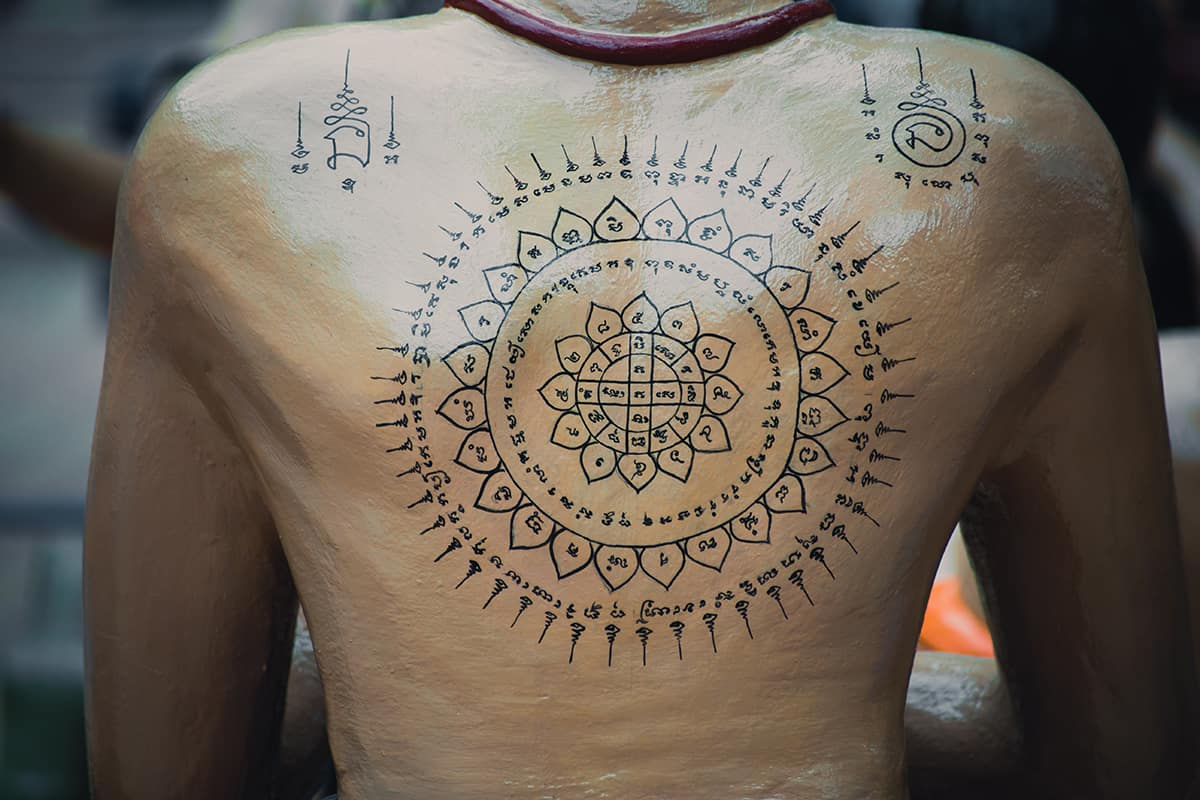 The most obvious controversy around Sak Yant tattoos has to do with Western tourists getting them without understanding the deeper significance. A Sak Yant tattoo is supposed to be a sign of a serious commitment to Buddhism, not just another travel souvenir.

According to a 2011 NPR report, Nipit Intarasombat, then Thailand’s Minister of Culture, called for a ban on foreigners getting religious tattoos that offend Thai people. The conflict was especially focused on images of the Buddha himself.

As reported by the Phuket Gazette, the government reached a compromise with tattoo artists instead of implementing the full blanket ban as proposed. The broader tension over cultural appropriation, however, is ongoing.

Meanwhile, Sak Yant tattoos also have their critics within the world of Buddhism. Like other religions, Buddhism has internal divisions. Culture Trip points out that conservative groups within Buddhism oppose Sak Yant tattoos — even to the point of putting up a large billboard near the airport in Bangkok, Thailand, about the issue!

One of the main complaints within Thai Buddhism about Sak Yant tattoos is that they’re too closely tied to a local belief system that combines pre-Buddhist animist beliefs with Buddhist precepts. The tattoos are therefore viewed as diluting the purity of the Buddhist religion.

However, not all complaints about Sak Yant tattoos within Thai culture are specifically focused on religious issues. Some people just view the tattoos as trashy and indicative of low social class.

As with any other kind of tattoo you might consider, you can’t please everyone. However, if pursued with the appropriate level of seriousness, a Sak Yant tattoo can be an important part of your spiritual journey.

Symbols of Family and Their Symbolism – A List
Recent Posts