Wanderlust is one of the most interesting and exciting human sensations.

Naturally, we all love the security of our homes, but the nomad in us at least occasionally wants to stretch his feet and hit the road.

Once a dangerous and adventurous undertaking, and later safer, but reserved for the wealthy, travel has now become a leisurely activity for the masses. What is more, embarking on journeys has become a way of life for some people.

On the other hand, a journey can be an inner experience. Spirituality has long focused on the notion of an inner journey to the center of one’s consciousness, subconsciousness, or soul – call it whatever you want. On that trip, getting to know oneself, forgiving, and letting go are the wanted destinations.

Since people identify with journeys and travel so strongly, consequently many symbols designate the human love for trips, expeditions, and pilgrimages.

Let’s find out what the symbols of journey 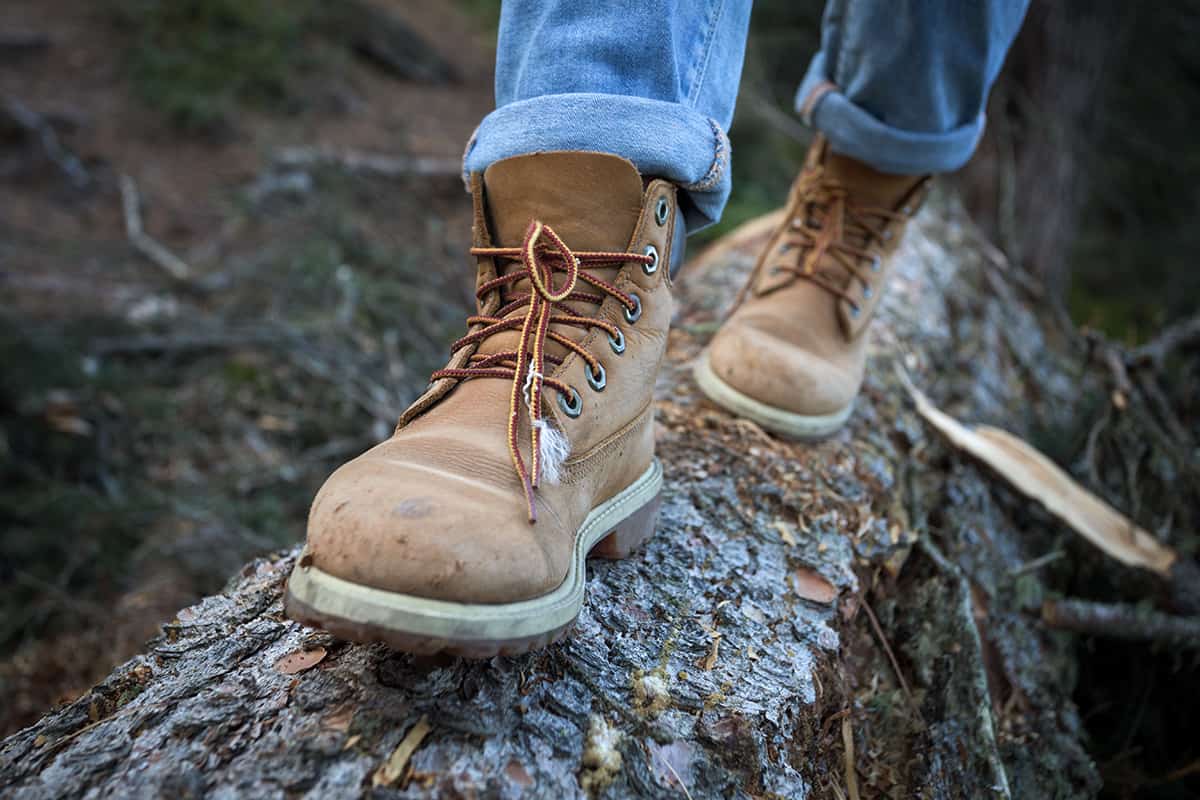 Boots – and especially the hiking boots – are logically associated with journeying. That is especially true for people who enjoy mountaineering – a hiking boot is a main essential in the sport. There are even small rituals that include a symbolic use of a boot – for example, some mountain hikers practice gently kicking a rookie mountaineer on their behind the first time they pass an elevation of 2000 meters.

But even before the invention, a boot has been a symbol of conquering territory. As the Roman army was primarily based on walking soldiers, the soldier’s boot symbolized all the power of the army. 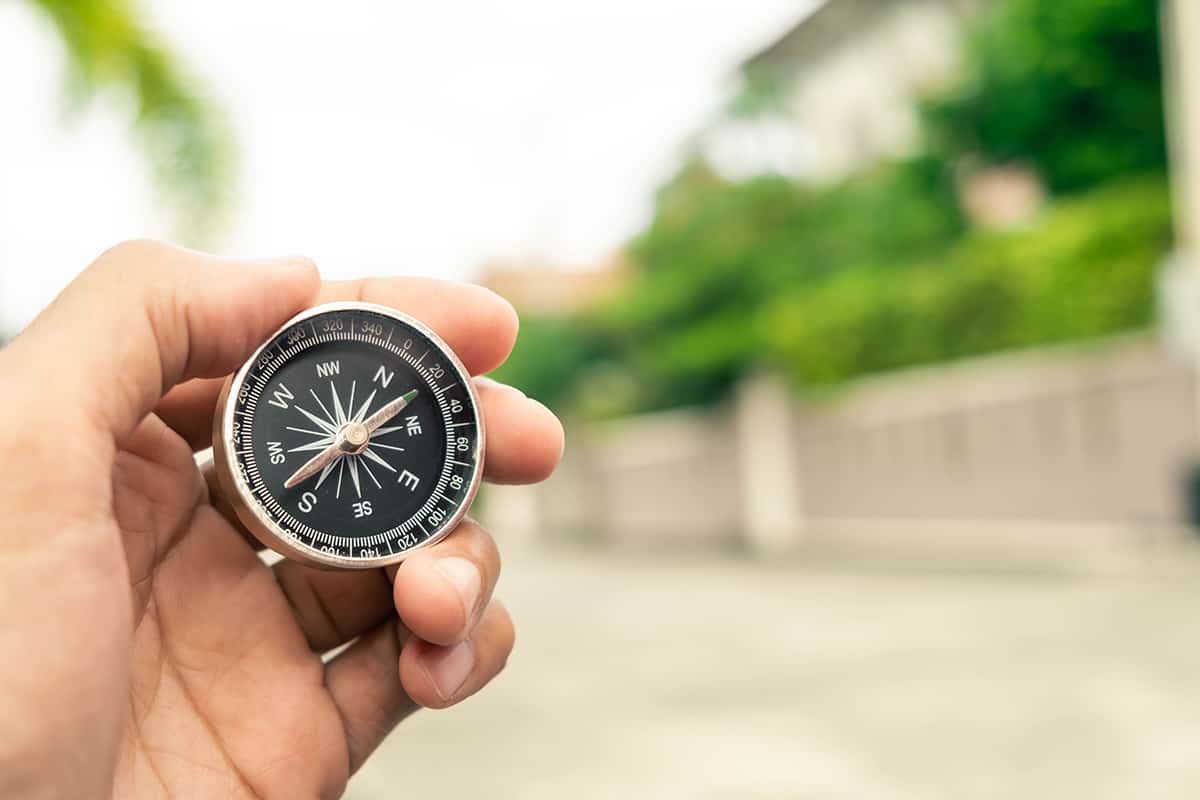 The compass – and especially the nautical compass – is one of the most recognizable symbols of journeys. It was invented in China around 206 BC. Since then, it has helped numerous people orient themselves in space – mostly during exploration, travel, or another type of journey.

People have very poor senses when it comes to orientation – we cannot feel the magnetic field, for example. But the compass is there to do that for us. Coupled with the map, it creates an irreplaceable combo that helped humans to find their way, even on even on long and treacherous journeys.

Despite varying designs, the main features of a compass are the pointers that tell us the sides of the world, and the moving needle that tells us the direction. 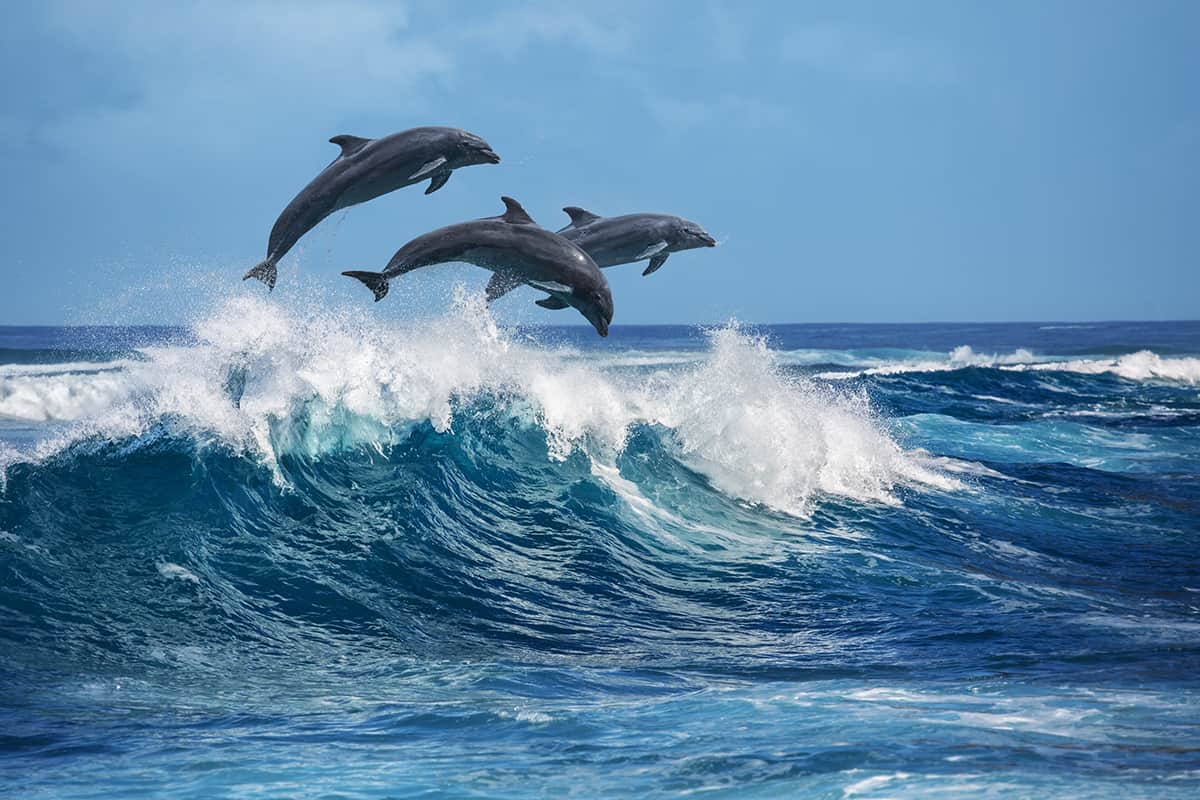 Dolphin can be a symbol of sea journeying, but also of an inner journey where it can appear as a guide. This is not strange considering the fact that dolphins are known to follow ships, help them navigate in tricky waters, and even rescue drowning people.

These qualities evoke a sense of mystery that makes a dolphin an ideal candidate for a symbol of both inner and outer journey. Dolphins are perceived as protectors of adventurous spirits.

Hermes is an Ancient Greek god of wealth, luck, fertility, trade, thieves, animal husbandry, sleep, language, and – travel. With his mischievous character and constant search for fun, Hermes is an archetype of a trickster. Also, he was the inventor of the lyre. a patron of shepherds, but also the thieves – after all, Hermes was constantly stealing things throughout Greek legends.

However, Hermes’ most important role was that he was the messenger of Mt. Olympus – a sacred mountain and a home to all Greek deities. Thus, he became a symbol of crossing borders and boundaries. Additionally, he had a pair of winged sandals (see below) to help him on the task.

Hermes surely is one of the more lively gods in the Greek pantheon, and definitely, the one most adept to be a god of travel! 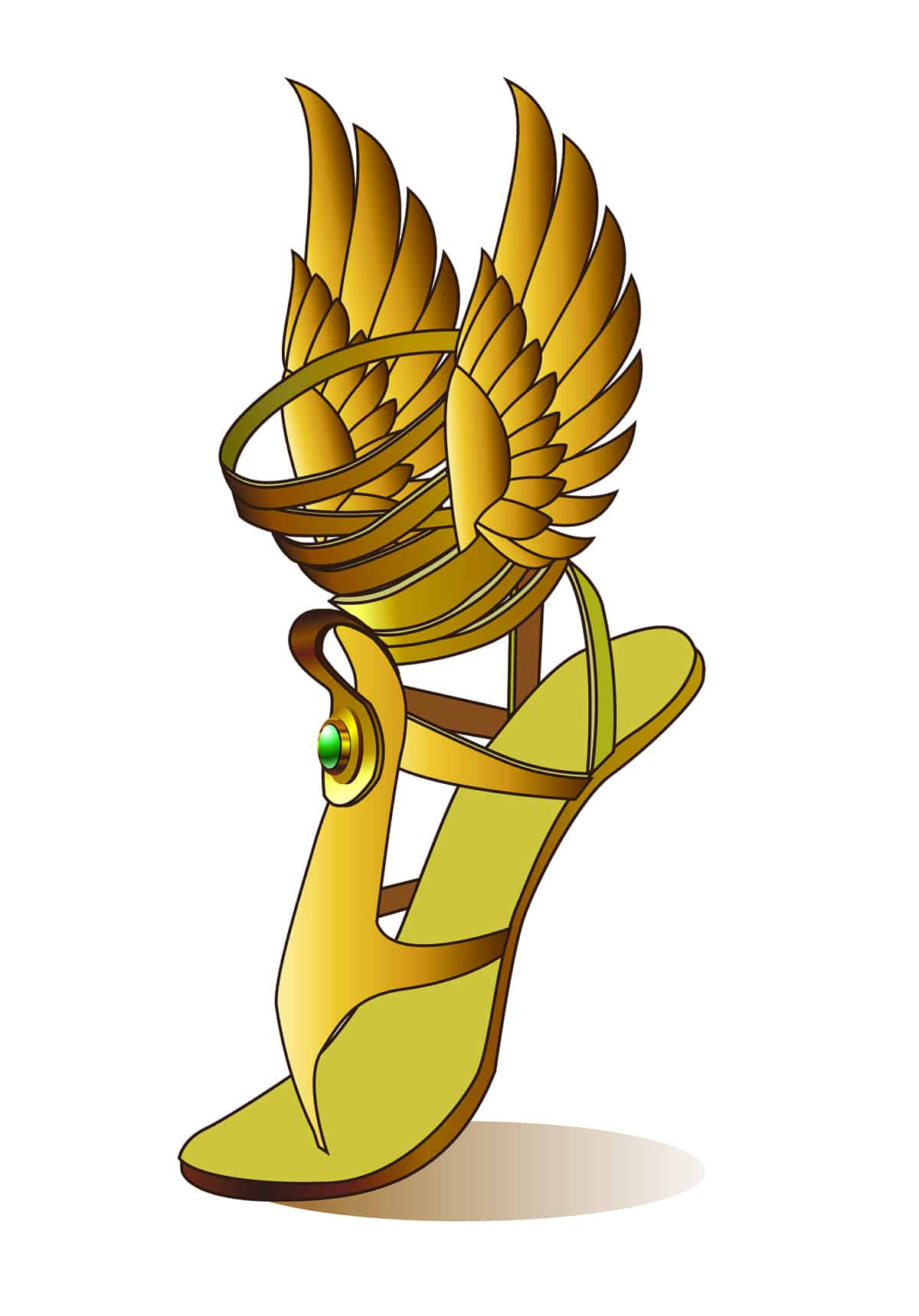 As I’ve said already, Hermes has had a pair of winged sandals – with two little wings on the sides in line with the ankles. According to the legend, the sandals helped him to cover long distances swiftly and without getting exhausted – which is surely useful when you are the messenger of Mount Olympus. Remember, there was no texting in those days.

Because of their symbolism and the fact that they are very good-looking, the winged sandals also became one of the symbols of wanderlust and love for journeys. The term “Godspeed” can certainly be applied to the case of Hermes and his tight-fitting sandals. 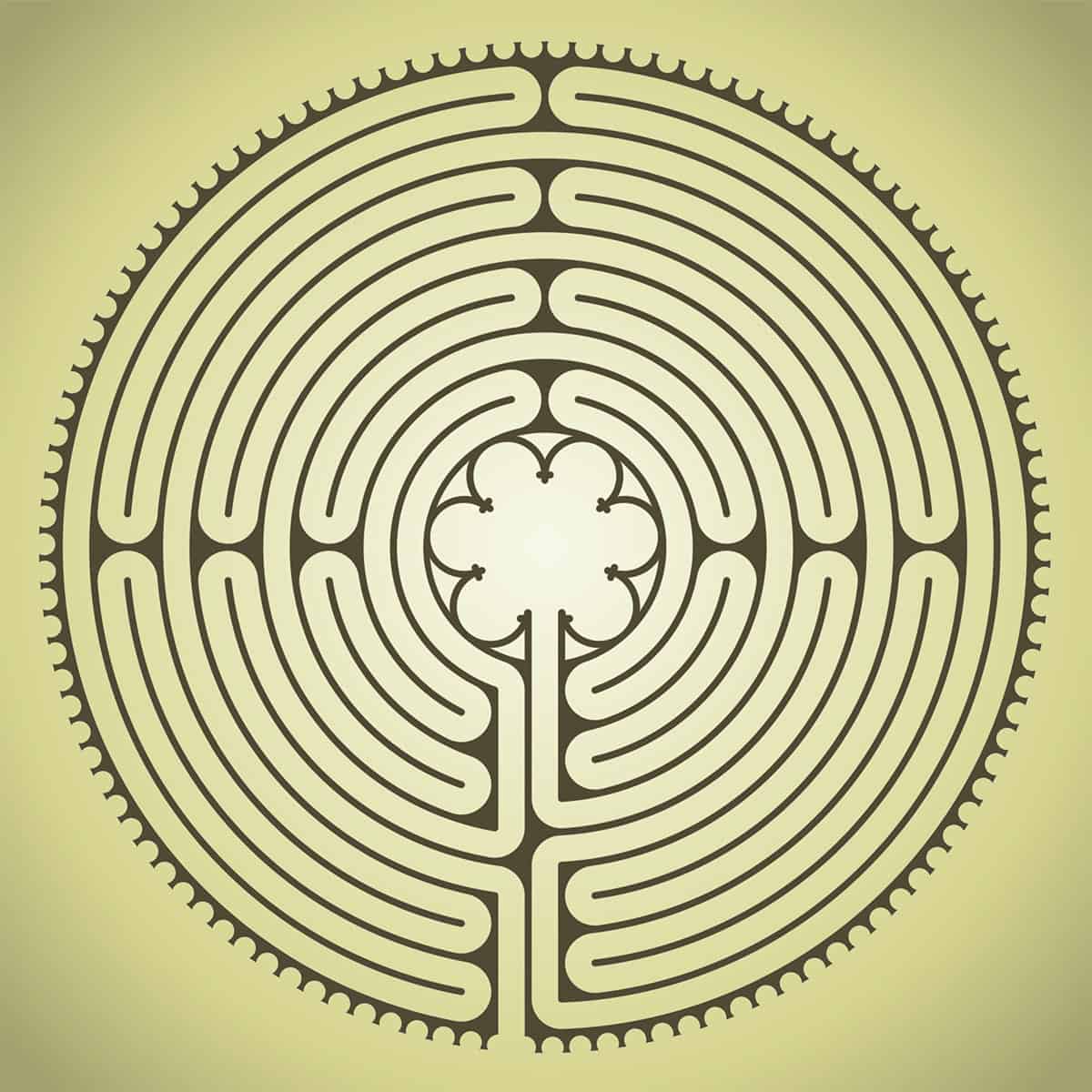 Here is a pure symbol of an inner journey. In many civilizations, a labyrinth stands for just that – a life journey, a life adventure, or a major life change after a period of trials.

The fact that the labyrinth has an entrance that leads towards the center and then the winding road out of the labyrinth is the main metaphor this symbol is based on. 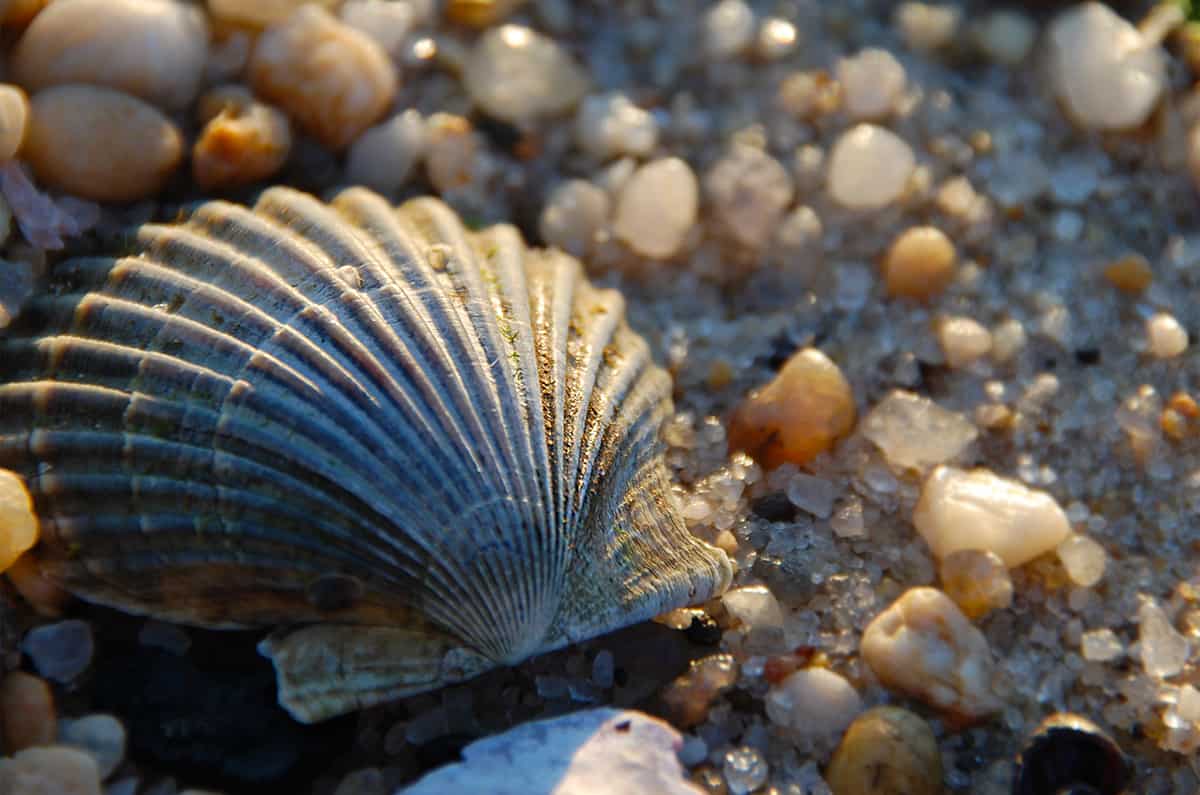 The most recognizable symbol of pilgrimage in Europe, the Scallop Shell is mostly related to Camino de Santiago, Europe’s biggest pilgrimage route.

Although there are many legends surrounding it, today the Scallop Shell is seen as a symbol of guidance towards the goal – Santiago de Compostela and the tomb of Saint James. The dented lines in the shell represent the roads – different Camino paths – that all meet at one point. along with the yellow arrow, is used to guide pilgrims along the many different routes heading to Santiago.

From medieval times to the modern ones, pilgrims or just curious journeymen taking these routes have worn the Scallop Shell with them to provide them with metaphorical guidance and therefore support on their journey.

A traveling bag is surely and undoubtedly a no-brainer symbol of travel and journeying. However, there may be slight differences in the symbolism of various kinds of travel bags. Let’s check them out.

Bundle on a stick

The most primitive, yet one of the most iconic traveling bags is a bundle (usually made out of a handkerchief or another kind of square piece of textile) tied to the end of a stick, with one’s belongings inside the bundle. It symbolizes someone who has left a life he or she knew behind, starting a journey that is not only external but internal as well.

To sum it up, a bundle on a stick is tied (no pun intended) not just to changing a locality, but to new beginnings, rebellion, and exile. 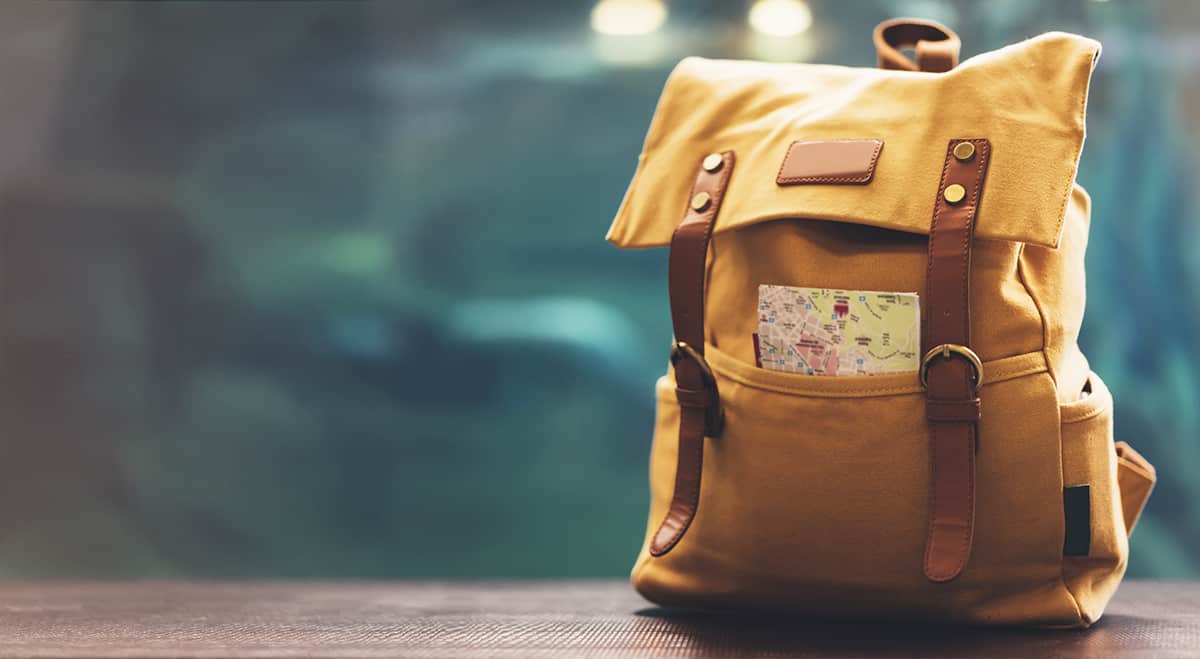 The traveler’s backpack is a bag that just screams “journey”. It is a special symbol because it stands for a special kind of journeying. Backpackers are modern journeymen who try to see most of the world while giving up on modern comfort. They use collective means of travel such as busses and trains and stay in hostels, motels, or with volunteer hosts rather than hotels.

That way, backpacking has become a modern way of doing a pilgrimage, although spiritual or religious motivation doesn’t have to be present. The very way of traveling this way takes you on an inner journey much similar to the old-school pilgrimage. 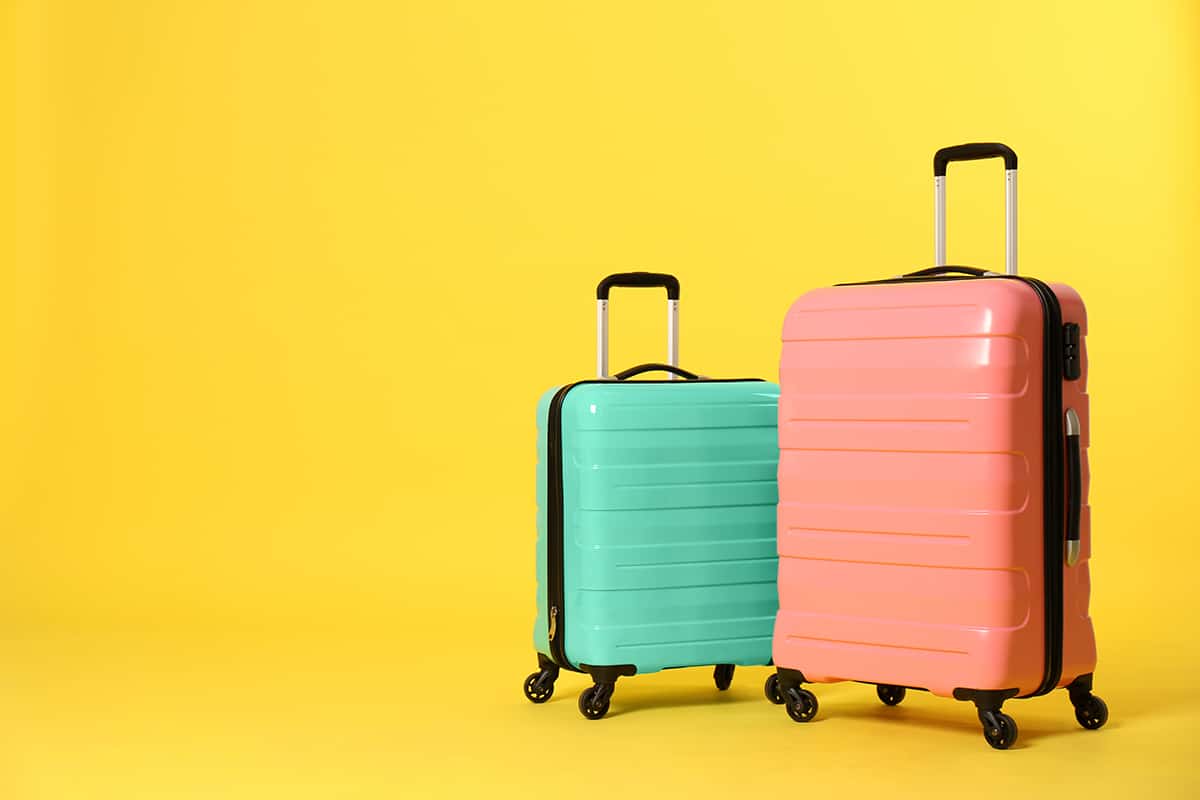 For the most part, luggage or a traveling suitcase is a symbol of a long-distance journey – the one taken by some means of transportation. This way, luggage as an icon stands for leisurely journeys.

Luggage portrayed with loads of stickers symbolizes someone who is an experienced journeyman and a world traveler.

However, the luggage symbol usually lacks that inner journey dimension hinted at in the other two traveling bag symbols.

Modern journeys, and especially leisure travel,  are unimaginable without the help of at least some vehicles to get you from point A to point B. Even people doing pilgrimages go to the beginning of the route via some form of transportation.

However, different vehicles have subtle differences in their vibe as symbols.

The airplane as a symbol is comparable to the symbol of luggage in the Travel Bag section. It is associated with long-distance and world travel (“to fly around the world”). More rarely, it can also symbolize the high end of a personal journey when you “feel like flying” in the end.

A bike can be compared to a backpack on the list above – along with a journey itself, it is also a symbol of adventure and a personal experience that can lead to an inner journey as well. An archetype of a biker who is essentially looking for freedom by riding all those highways is a good example – each is essentially performing soul-searching, which is an inner journey. 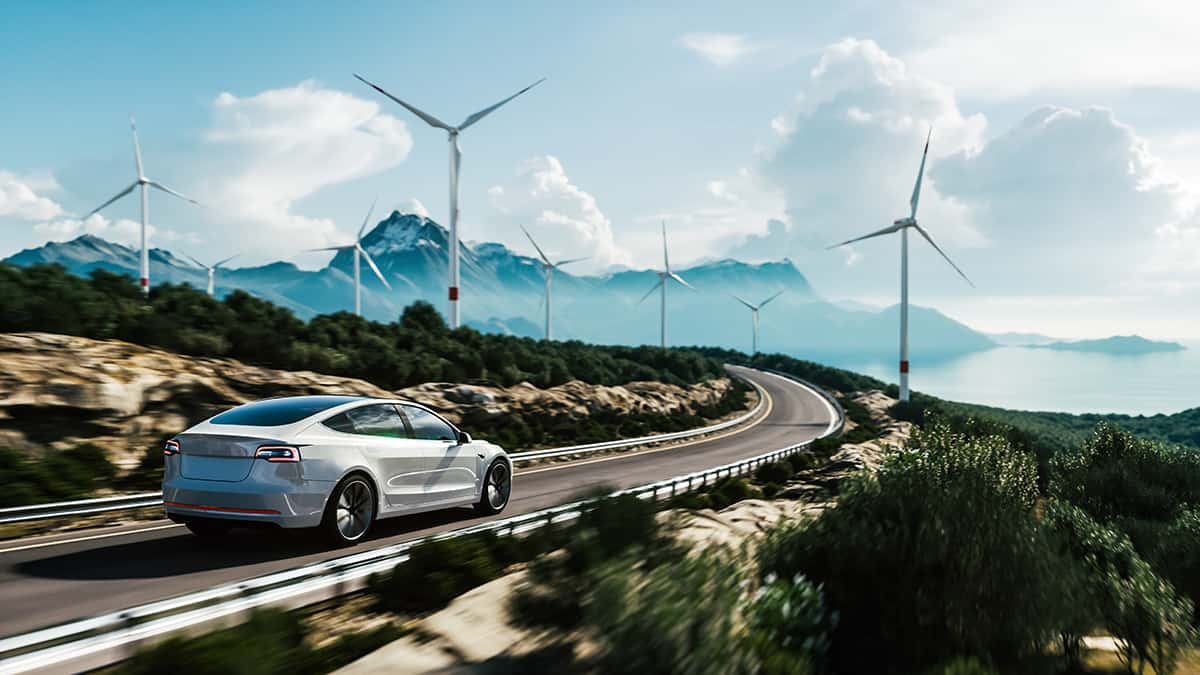 A car can symbolize a bunch of things – speed, mobility, transportation, and, well, the car industry. It is not instantly related to journeying and traveling. However, a car with luggage and the rooftop certainly is. Similar to the airplane, this symbol is mostly related to leisurely travel. 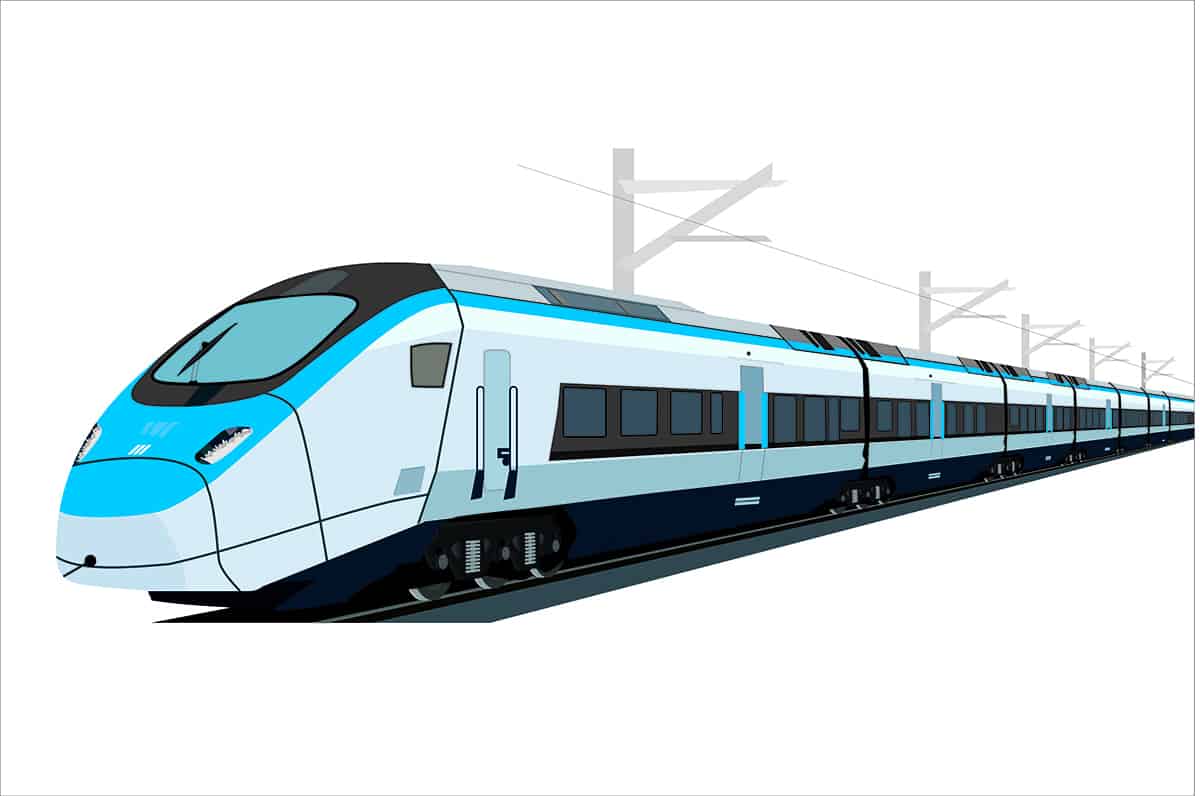 As depicted by many movies, trains used to be the first means of collective travel – but also a source of often dramatic personal life changes. People have traveled across countries, voyaged to wars, or to their deaths (think Jewish people put on a ride to a concentration camp) using trains.

That is why trains evoke deep emotions that can be related to both inner and outer journeys.

Symbols of Family and Their Symbolism – A List
Recent Posts