Meaningful messages from the Universe don’t just come to you in your dreams. Strange occurrences in your waking life can similarly be interpreted as signs and omens.

Birds sometimes fly into windows because they don’t realize that transparent glass is a hard surface. The impact has the potential to be fatal for the bird, though it isn’t always. It’s definitely a startling and attention-grabbing incident for any humans on the other side of the window too.

When it’s your window that gets hit by a bird, it might make sense for you to think about whether that’s a special message for you. 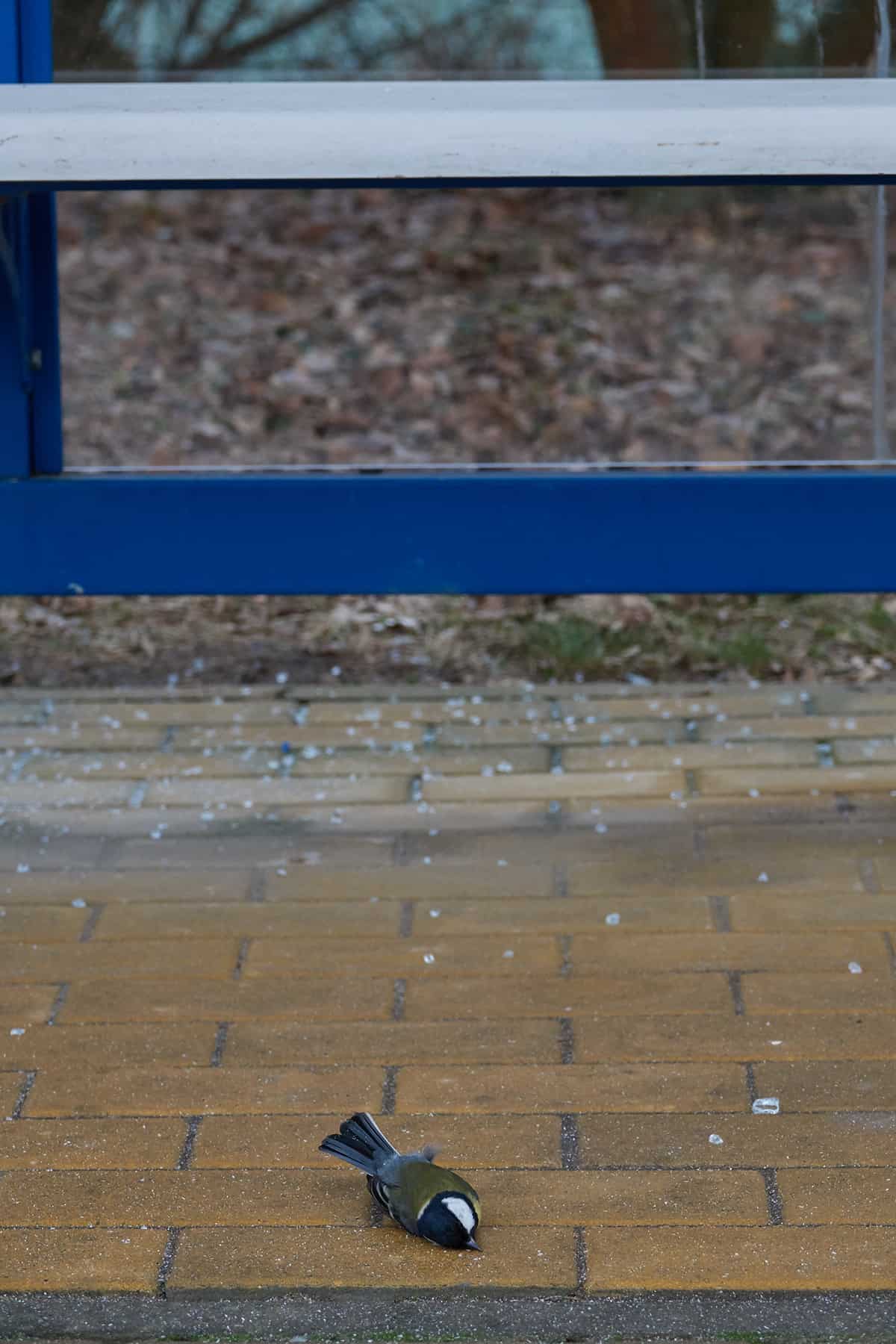 Sometimes a bird that has flown into a window will gradually recover from the impact. Perhaps the bird will be stunned and move slowly for a bit before managing to fly away.

Seeing a bird hit a window and recover from the impact could be a positive omen that you’ll be able to get back on your feet after experiencing a painful setback in your life. However, if the bird is alive but not able to fly yet, this might mean you should honor the time you need to recover from an injury or loss instead of pushing yourself to get over it quickly.

If you see a bird fly into a window and die from the impact, this is probably a bad sign. It could mean that you feel crushed by your collision with a large, powerful entity that has no empathy for your side of the story.

From the bird’s perspective, the clear glass of a window can be seen as deceptive, falsely leading birds to expect safe passage. You might similarly feel like significant institutions or authority figures in your life deceived you and led you to expect things that weren’t actually going to happen.

If you still want to find a positive way to look at this symbol, though, it would probably be that forces beyond your control are bringing a situation in your life to an end. Even though the ending may not happen in the way you would have chosen, it will at least free you up to pursue something better. 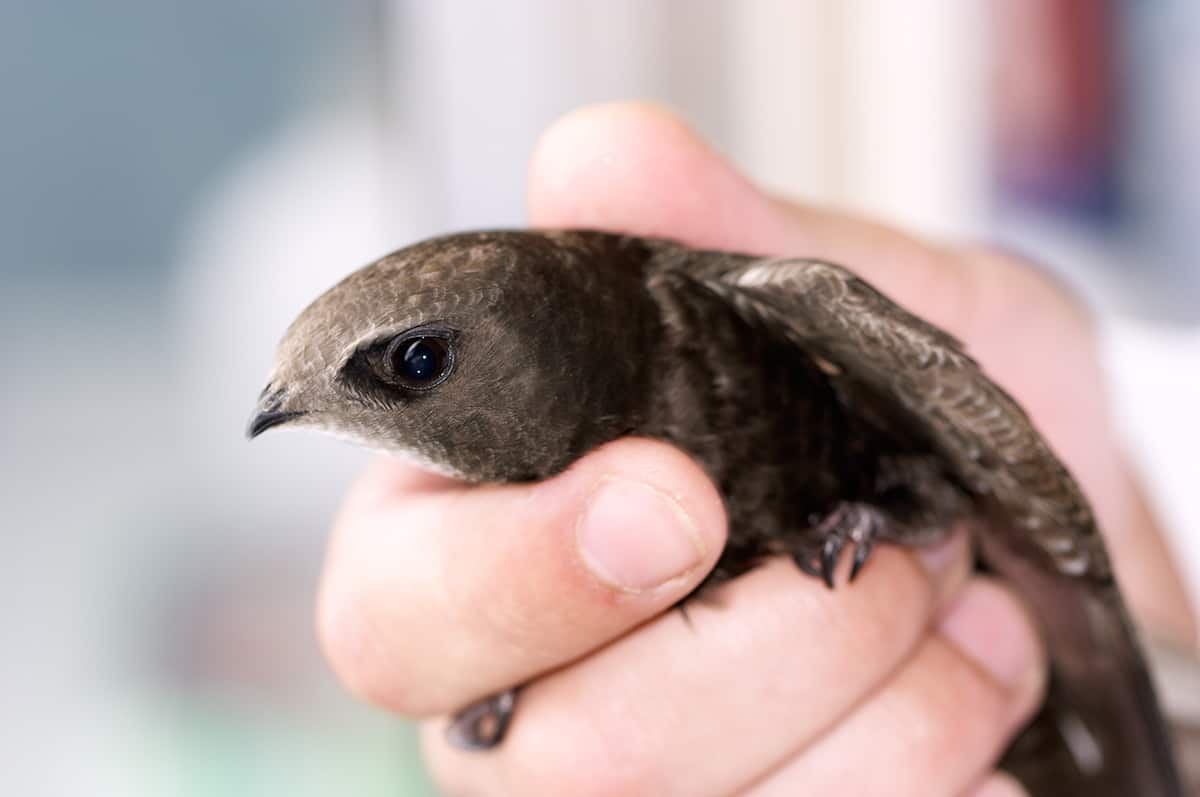 Sometimes baby birds fly into windows as they are learning to fly. Seeing a baby bird fly into a window could symbolize that it’s important to have patience with people in your life who are developing new skills.

You may be a parent concerned about how your children are doing, or you might be frustrated with your own efforts to try something you haven’t done before. Either way, keep in mind that failure is a normal part of the learning process. 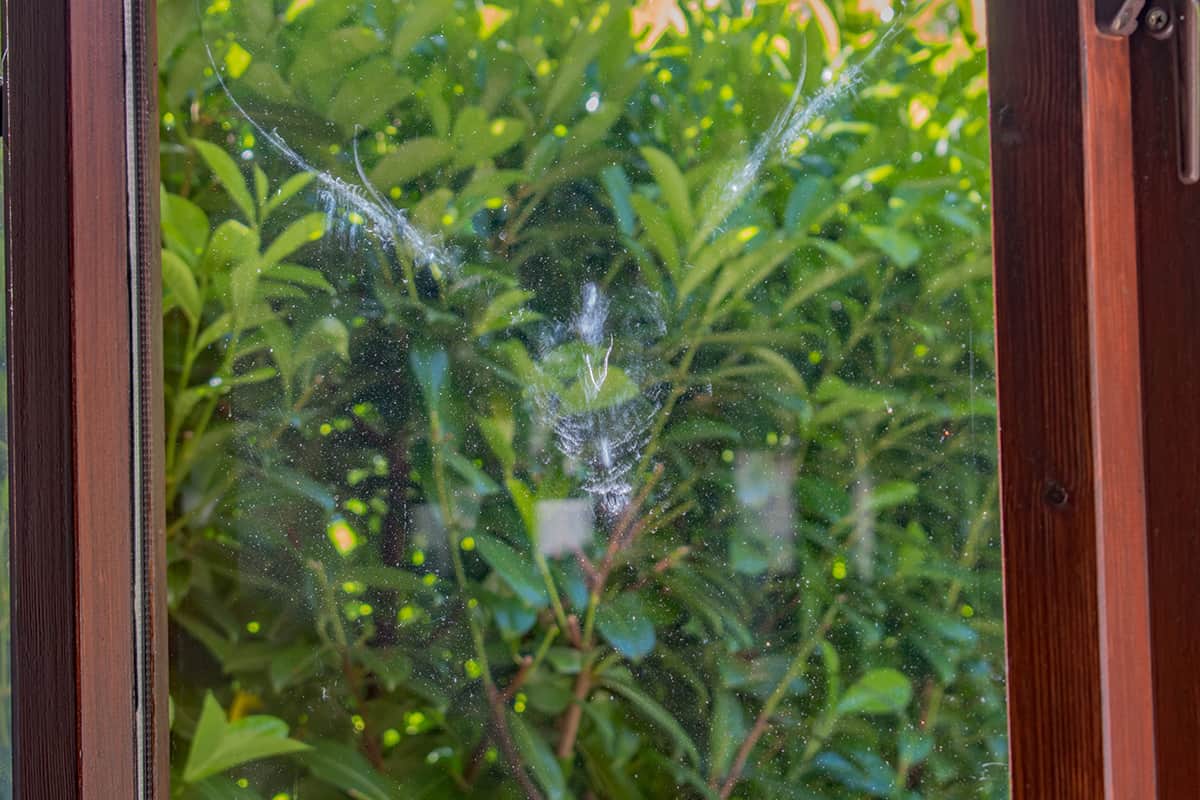 If birds fly into your windows repeatedly, you might start to wonder if you’re doing something that encourages it somehow. One bird could be a fluke, but, with multiple birds, the common denominator is you.

In this sense, birds flying into your windows repeatedly could symbolize that there’s a discrepancy between the signals you’re putting out and the signals you think you’re putting out. You may be giving people the impression that you’re available for a level of interaction that you actually don’t want to provide them. You might need to take action to address this problem of mixed messages.

Birds flying into windows repeatedly could also reflect that you feel attacked by the people in your life. You might feel like they’re always demanding things from you. Drawing the curtains to block the window in some way may seem unkind in the moment, but perhaps giving them a clearer sense of your limits will ultimately help you have a more peaceful relationship going forward.

As described in bird dream symbolism, birds can symbolize communication. In this sense, birds hitting your windows repeatedly could simply reflect that you feel totally inundated by the emails and social media notifications you receive. Even if no one involved has bad intentions toward you, you may need to find a way of setting limits to protect your peace of mind.

Bird trying to get in house meaning

Usually, wild birds are too afraid of humans to want to get into their houses. If a bird is trying to get into your house, you might take it as a flattering omen that you’ve been able to bridge a gap most people see as impassable. Perhaps you’ve managed to connect with someone in spite of a cultural difference or other barrier that would otherwise come between you.

If the bird trying to get into your house seems to want something you have, like food, this could push you to look at your attitude toward sharing your resources. Are you happy to give some to others who have less, or are you resentful of the demands they make on you?

If you primarily feel uncomfortable about the bird trying to get into your house, this could symbolize that you feel invaded by someone in your life. Even if they appear cute and harmless, you probably need to honor your intuition’s warnings about this person.

One common image in Christian artwork is Jesus Christ knocking at a door asking to be let in. The original painting of this sort was The Light of the World by William Holman Hunt. The idea is that you are supposed to let Jesus into your heart, but you must choose to open the door yourself.

The spiritual meaning of a bird pecking at a window could be something similar — that the spiritual messenger of your faith wants to get your attention. However, you can’t just accept their greeting passively. You will probably need to intentionally cooperate with this nudge you’re getting in order to fully benefit from it. 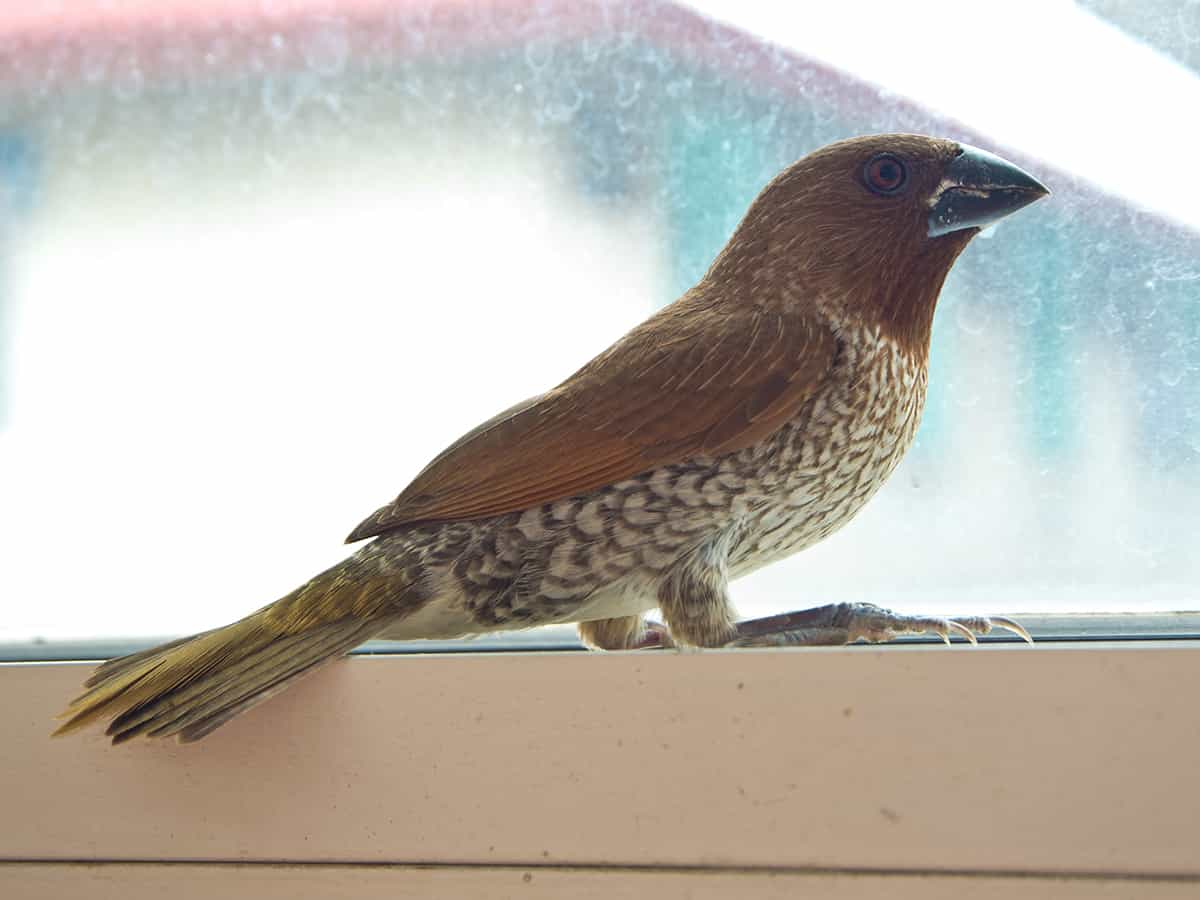 A bird calmly sitting on your windowsill is a bird that feels safe being close to humans, and that can be an unusual occurrence. You might therefore wonder if such a bird is not just a bird, but rather some sort of spiritual messenger. You can trust that impression if it feels right.

You could even wonder if the bird on your windowsill is a deceased loved one coming back for a visit in alternate form. This would be especially plausible if something about the bird seemed specifically linked to your loved one, like if the bird was their favorite type of bird or their favorite color, or if you saw the bird on the anniversary of a significant date. As with visitation dreams, if you have a powerful experience of that sort, you might as well trust it. 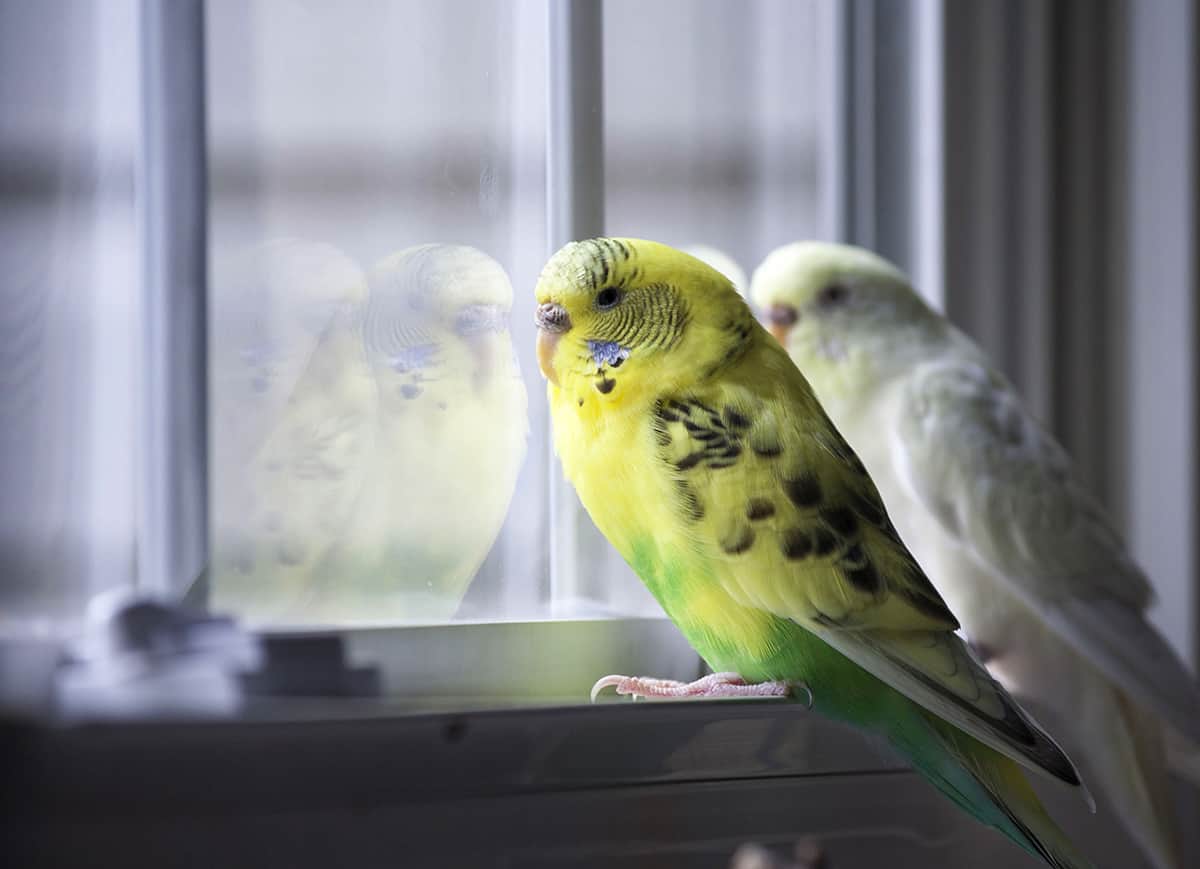 When you get a new pet bird and bring it into your house, it’s common for the bird to fly into your windows while adjusting to the new environment. This might also happen if you and a pet bird you’ve had for a while move together to a new residence.

Of course, your first priority should be making sure your bird is okay, but you can look at the situation symbolically after that. In this sense, a pet bird flying into windows could symbolize that you’re discovering the boundaries of a new situation in your life, like a new school or workplace. Sometimes the only way to find the limits is to crash into them.

A bird hitting windows from the inside could also symbolize that you feel like you’ve outgrown the limitations of your environment, but you can’t seem to move to the next level. It’s similar to the idea of a glass ceiling, a business term referring to unseen barriers that block women and minorities from leadership roles. 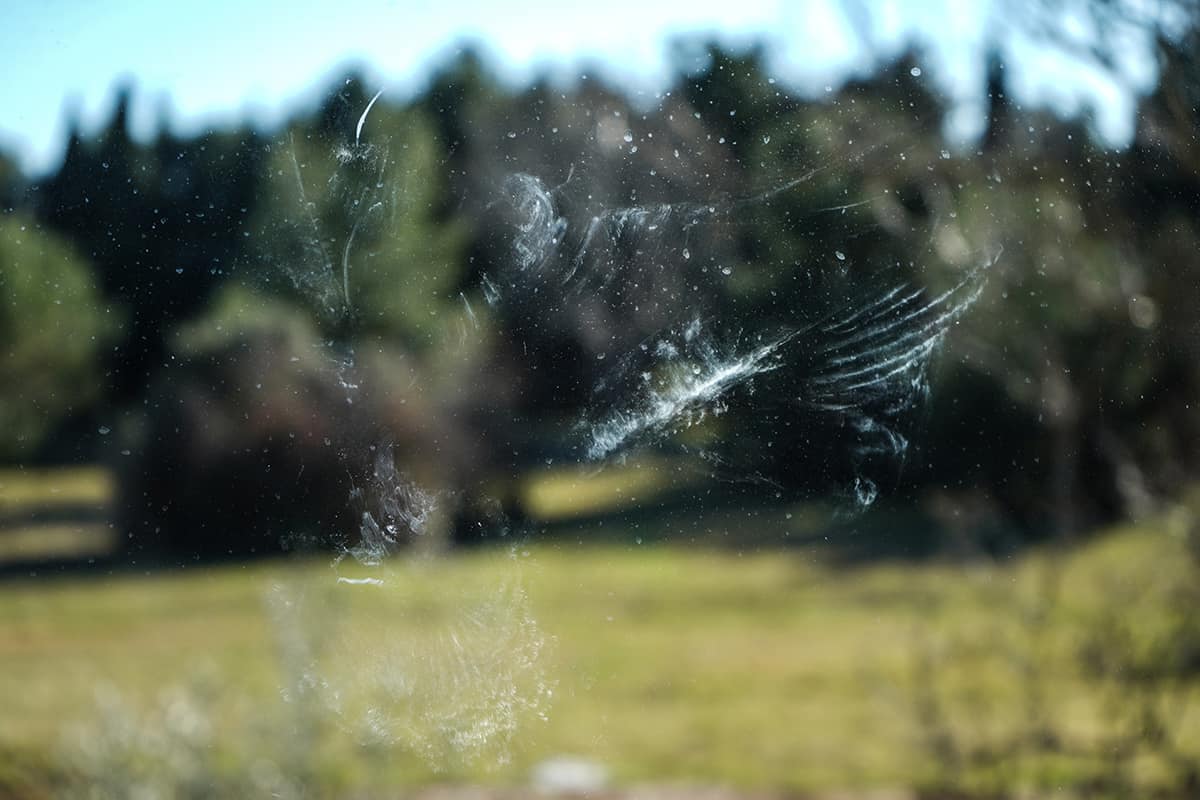 Sometimes when a bird flies into a window, the dust on the bird’s feathers leaves a mark in the shape of the bird on the window, sort of like a snow angel. The meaning of a bird leaving an outline on your window could be that you are more affected than you think you are by some important experience you have had.

Alternately, the meaning of a bird leaving an outline on a window could be that someone else is more affected by your role in their life than you would expect. You can be a powerful force, for good or for bad.