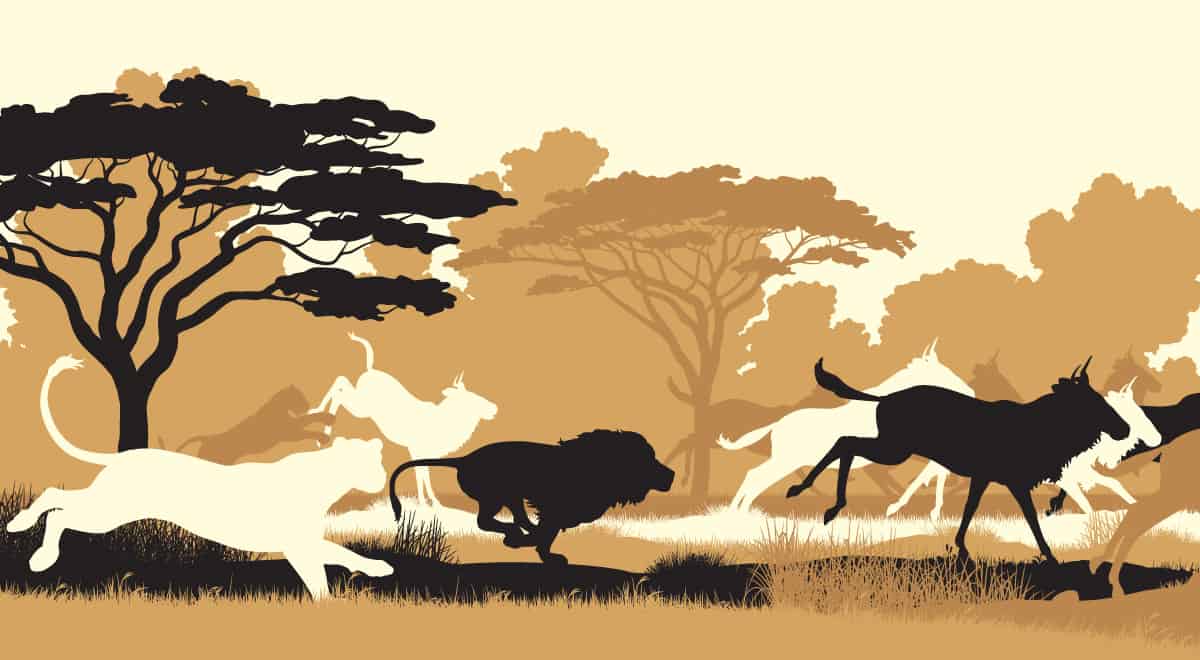 Dreaming about lions chasing you could be scary. You might have to admit, however, that you found the larger-than-life experience a little bit exhilarating as well.

Chasing is an aggressive act, and lions are wild creatures, so a dream of being chased by a lion could symbolize that you fear the presence of wildness and aggression in your life. You might feel like the order of civilization around you is breaking down.

Lions, with their big hair and loud roar, can also be a bit grandiose. Dreaming of being chased by lions could therefore symbolize that you crave drama and excitement in your life. 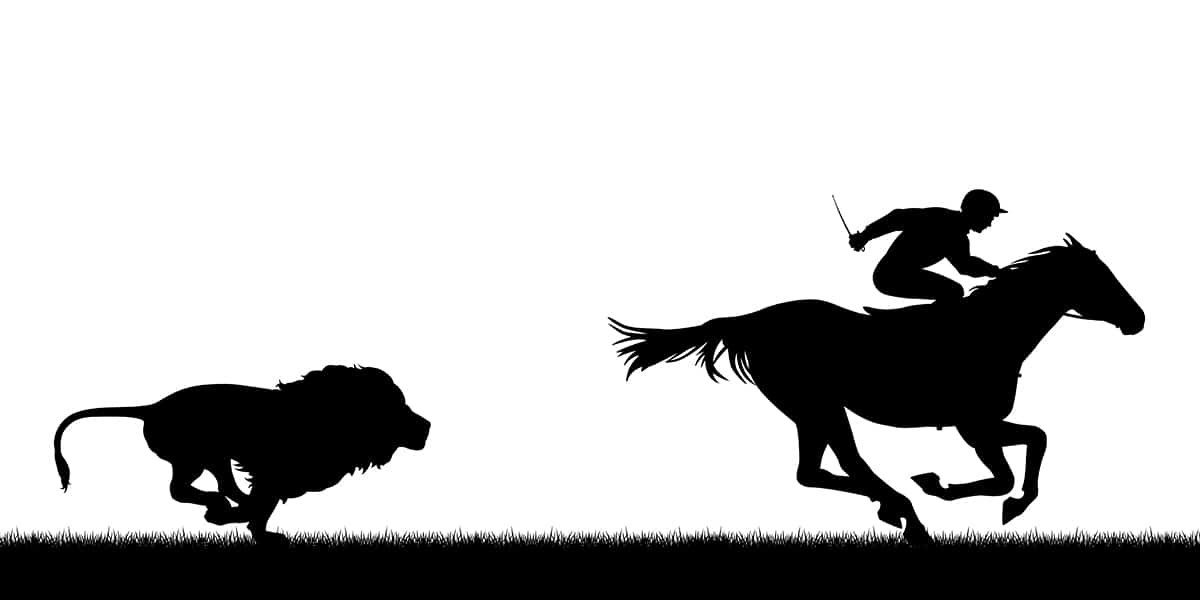 A dream of being chased by a lion could symbolize that there is aggression in your life. You might be running from someone else’s aggression toward you. Alternately, you may be trying to escape your own aggressive feelings that you wish you did not have.

People typically gain a sense of control over life when reality seems to follow predictable rules. Apocalyptic dreams, which feature unusual occurrences like the moon dripping blood, often show that you feel like things are out of control because the rules of reality are no longer being followed.

A dream of lions chasing you could similarly symbolize that reality no longer seems to be following the rules, especially if you live in an area where you never see lions. You might also feel like the law of the jungle, where might makes right, has come to override whatever law may be on the books where you live.

Dreaming of a lion chasing you could symbolize that you feel like someone is out to get you or has bad intentions toward you. It might seem that you cannot reason with this person. This can be similar to other dreams of aggressive animals, like dog attack dreams.

The lion is the symbol of the Zodiac sign of Leo, which has a reputation for being dramatic and theatrical. Dreaming of being chased by a lion could symbolize that you feel like your life has become too boring, and you crave more excitement and drama.

Dream of running away from a lion 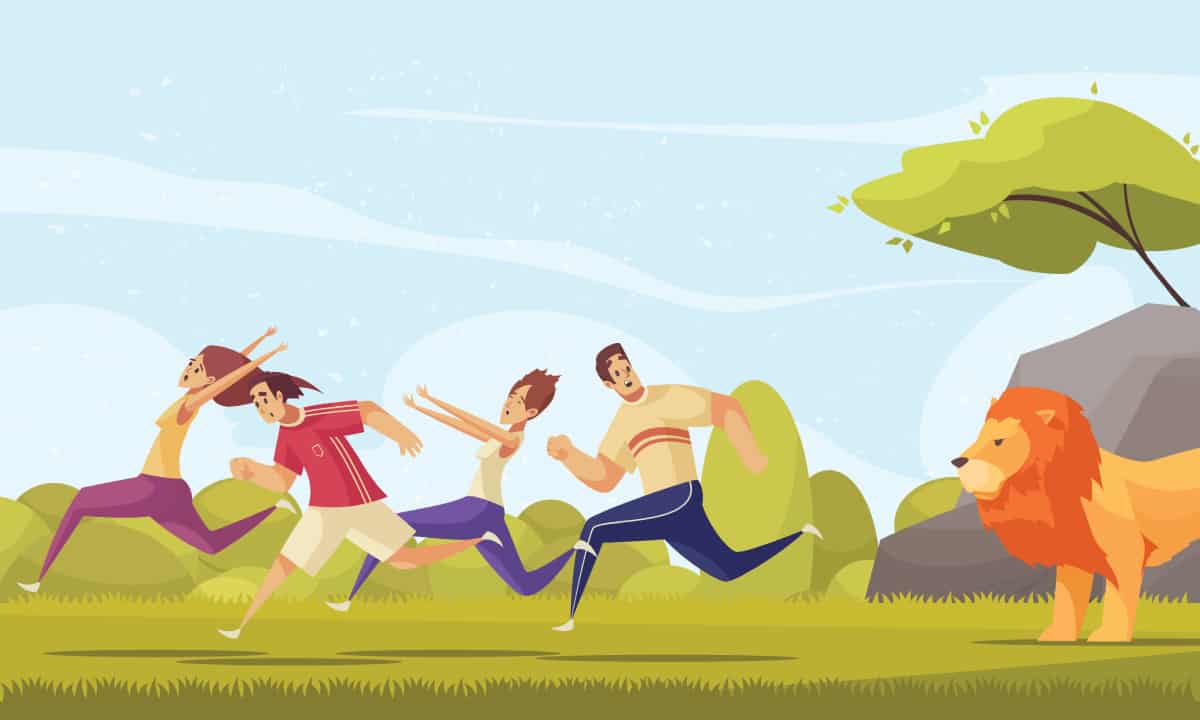 If you dream of running away from a lion that is chasing you, this could symbolize that you have the ability to get away from something that is threatening you in your life, though fleeing to safety may not give you the glory of dramatically slaying your enemy. This dream might therefore represent a situation where you have to decide whether you are more interested in getting vindication at any cost or in having the problem be over.

Dream of a lion chasing you playfully 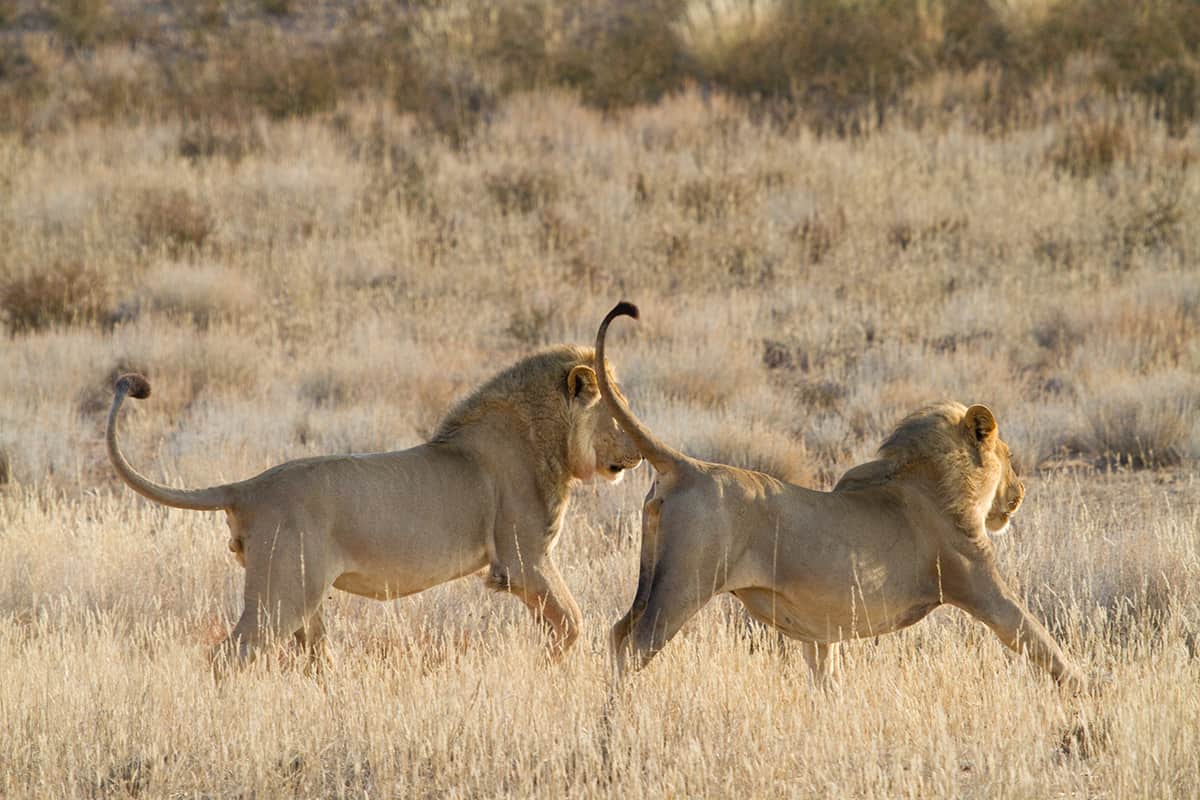 Sometimes lions are just overgrown kitty cats. Dreaming of a lion chasing you in a way that seems more playful than threatening could symbolize that you need more fun in your life. However, you may be better off acknowledging this desire for fun and thoughtfully figuring out how to make it happen, because otherwise fun might seem to come to you in a way that is a bit dangerous.

Dream of a lion catching you and eating you 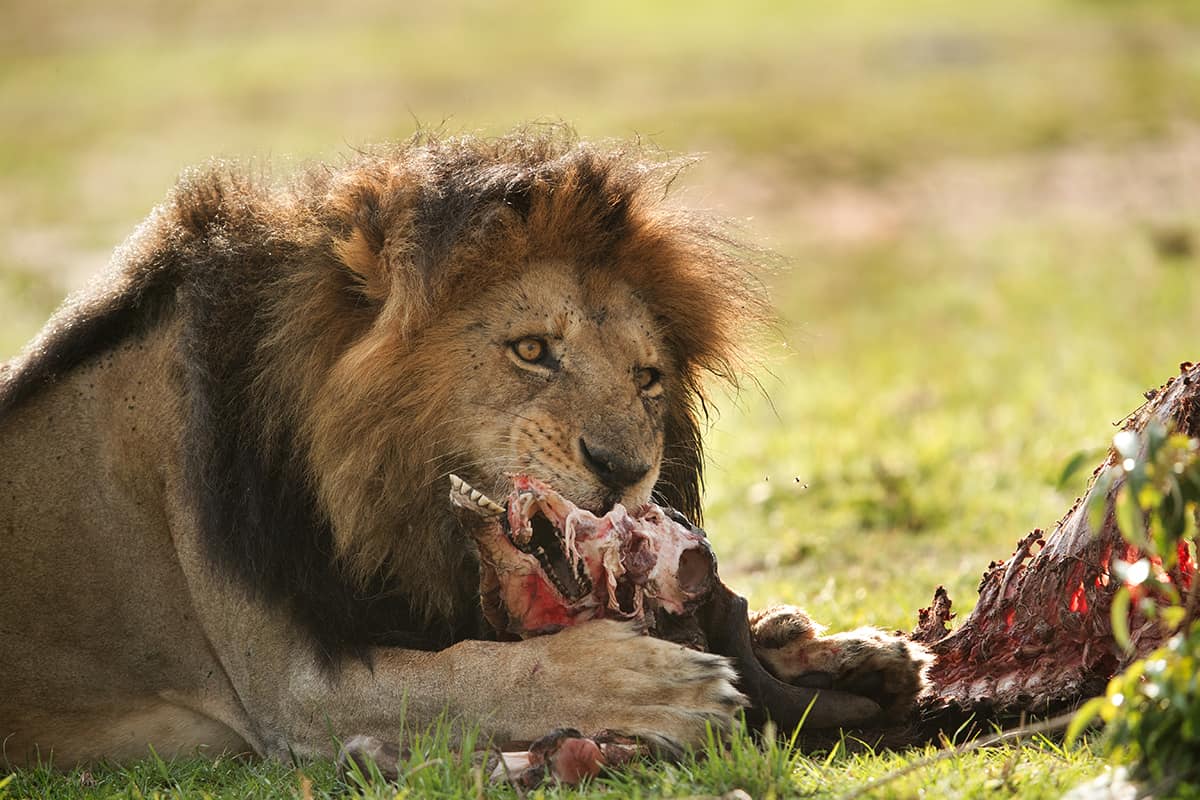 If you dream of a lion catching you and eating you, this might be a dream of death and dying, assuming that you die from the attack.

Death and dying dreams often symbolize that you are going through a time of transformation in your life. A dream of death by lion attack could suggest that you need to transform yourself in a way that leaves you with some of the lion’s qualities, like strength and power.

Dream of a lion chasing you in the wild

If you chose to be in a dangerous environment knowing the risks or felt pushed into it against your will, this dream might validate things you know already. If you have obliviously wandered into a situation that you don’t fully realize is dangerous, though, this dream could warn that you need to be on your guard.

Dream of a lion chasing you in a city 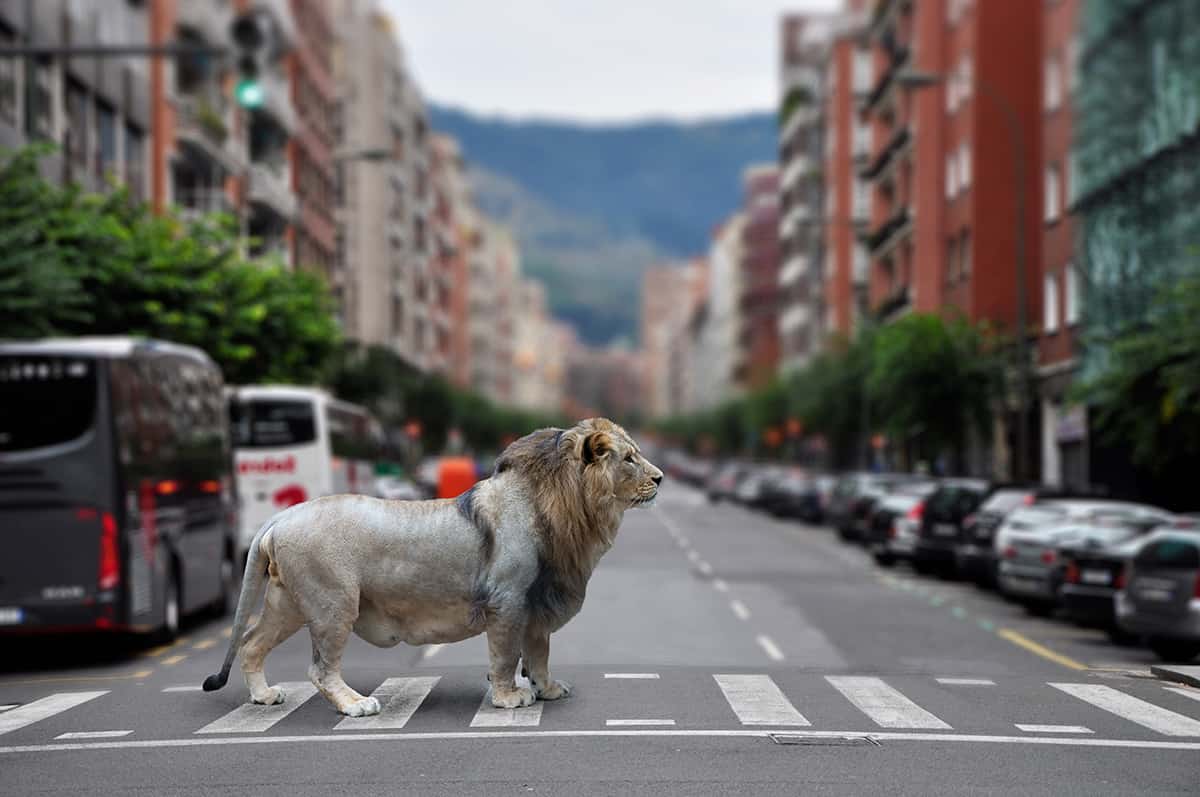 A city, however, is humans’ territory. If you dream of lions chasing you in a city, this could symbolize that other humans are not acting as you expect them to act. You may feel like people are being more aggressive than their circumstances warrant. However, you might need to be more realistic about the impossibility of fully eliminating primal dynamics from civilized life.

Your dream of being chased by lions could certainly be a departure from the routine events of your life. The grandiose quality of lions, however, might suggest that departing from your boring routine is exactly what you need to do. While the aggression of a lion chase may be difficult to integrate into the structure of civilized life, finding a way to accept it can help you become strong and powerful like a lion.