Life on Earth is full of limits, but infinity is the idea that some things are without limits. The infinity symbol can therefore be a powerful way to indicate that you’d like something, like your love for your partner or your child, to last forever. It might also awaken your curiosity about the mysteries beyond the boundaries of your usual experiences.

How to Make an Infinity Symbol

A good way to remember it is that an hourglass measures time, and eventually the sand runs from the top of the hourglass to the bottom, meaning that you’ve run out of time. However, an infinity symbol turns the hourglass on its side, and infinity means you’ve gotten away from constraints like the limits of time.

How to Make an Infinity Symbol Icon on Your Computer

If you’re using Microsoft Word on a Windows PC, you can find an infinity symbol by going to the Insert tab and then going to the Symbol menu. It’s in the Mathematical Operators subset.

There’s also a keyboard shortcut for typing an infinity symbol. On a PC, you hold down the Alt key and then type 236 on the numeric keypad.

Meaning of the Infinity Symbol 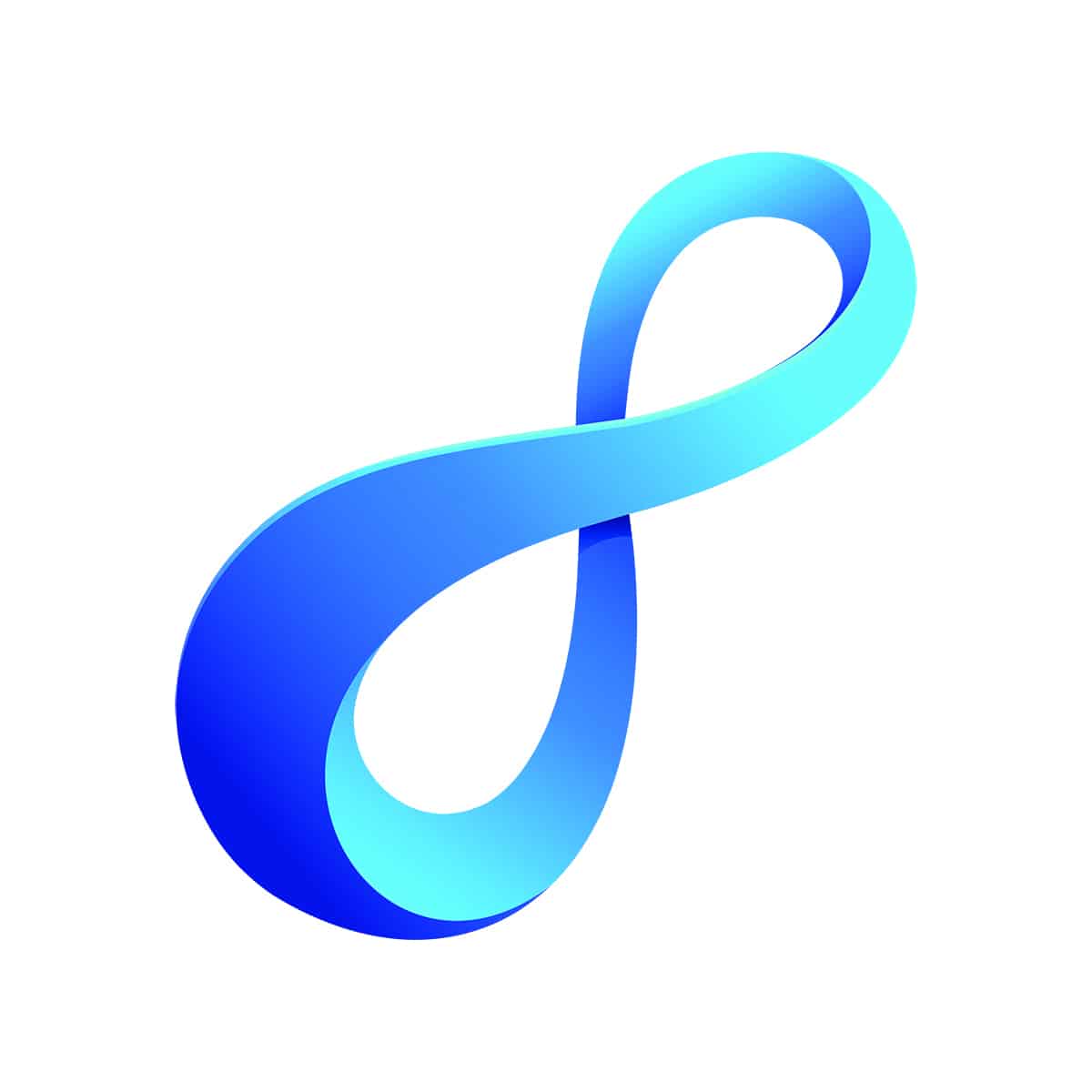 The infinity symbol simply means there is no limit. It’s often seen in the context of math problems to indicate a quantity that cannot be measured or an ongoing process that continues indefinitely.

Outside a mathematical context, the infinity symbol can be used to represent spiritual or emotional longings for something that will last forever or not be subject to other earthly limits. Common human desires represented by the infinity symbol include everlasting love, permanent commitment, and unlimited freedom.

Origins of the Infinity Symbol 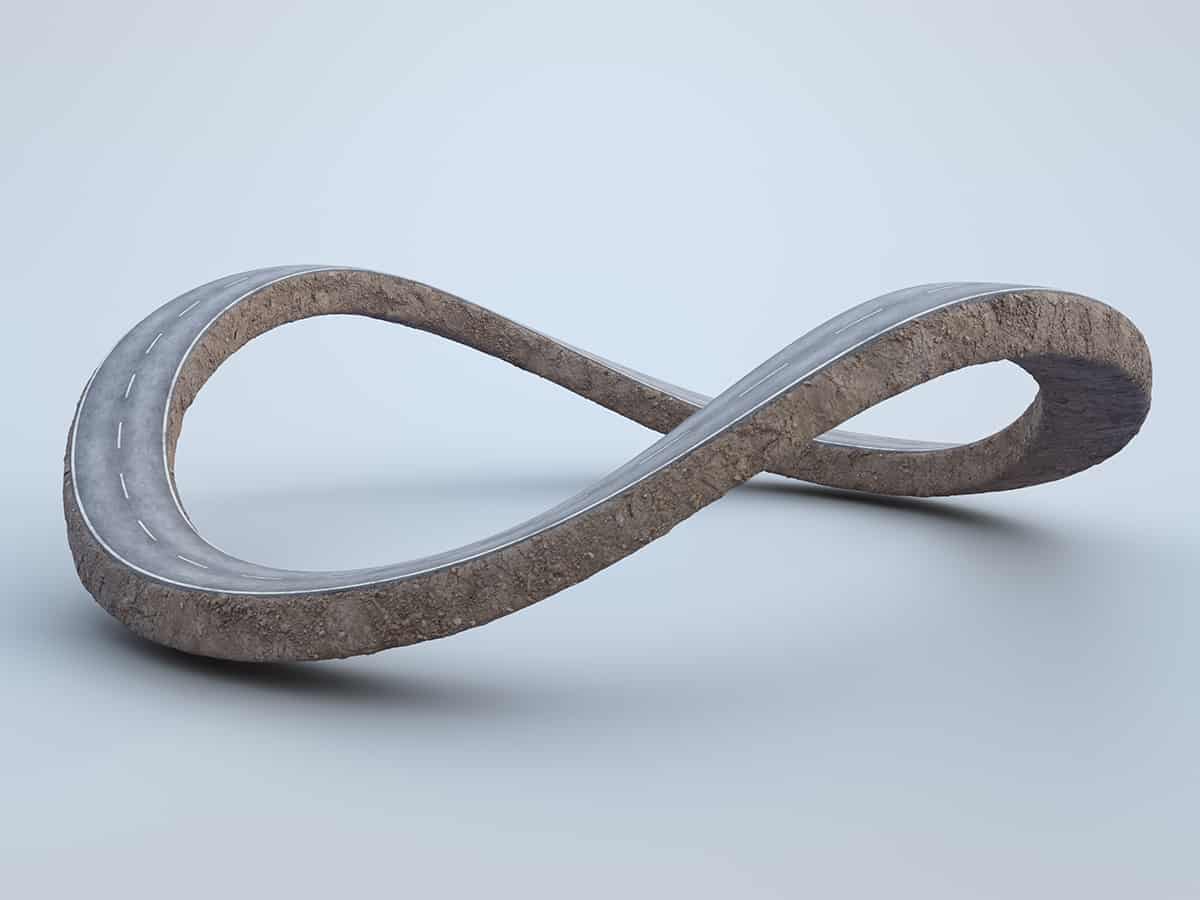 Britannica reports that the infinity symbol was first used to mean something that is limitless by English mathematician John Wallis in 1655. The graphic is also known as the lemniscate, and it had been used for decorative purposes prior to that. It is unclear why Wallis chose this graphic to represent this mathematical concept.

The need to convey limitlessness also extends outside the domain of mathematics. The infinity symbol has since come to appear in metaphysical contexts, such as on Tarot cards including Strength and The Magician. In this sense, the infinity symbol can refer to infinite potential and wisdom.

The metaphysical side of the infinity symbol has also been identified with the Ouroboros, a primal image of a snake or dragon eating its own tail. While the Ouroboros can be seen as a symbol of fertility, it also refers to a sense of being internally complete enough to fertilize and give birth to oneself.

Varieties of the Infinity Symbol 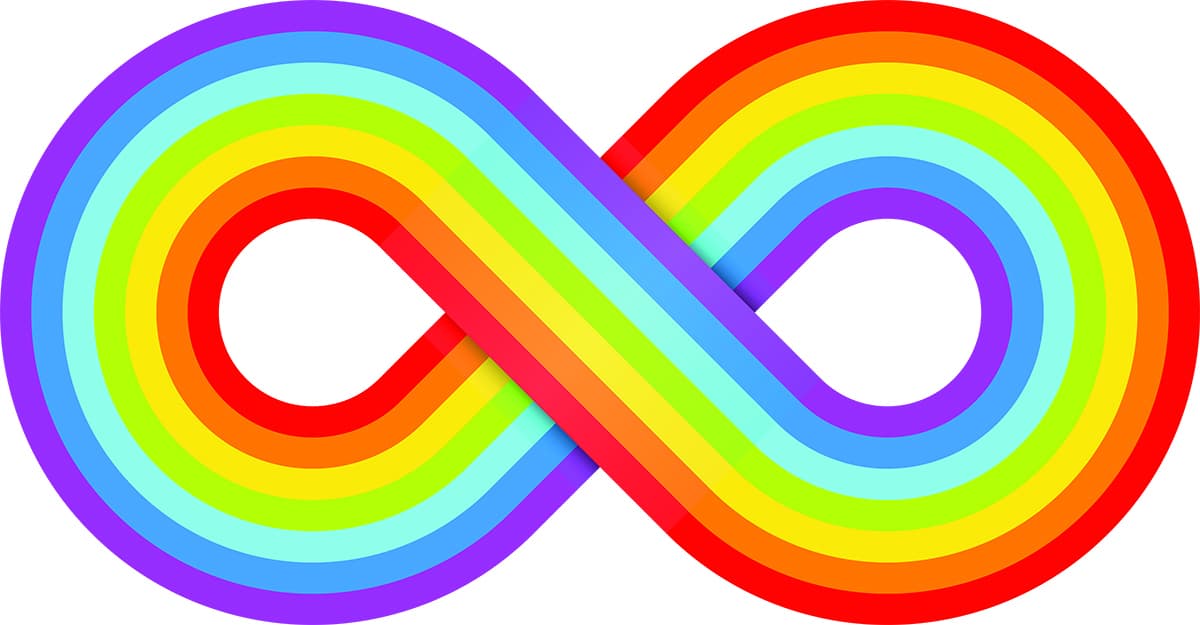 While there has been conflict over what symbol best represents people who have autism, the rainbow infinity symbol is coming to be preferred over the puzzle piece because it depicts them as people to be accepted rather than a puzzle to be solved. More broadly, the rainbow infinity symbol represents neurodiversity, the idea that neurological differences such as autism are not deficits. 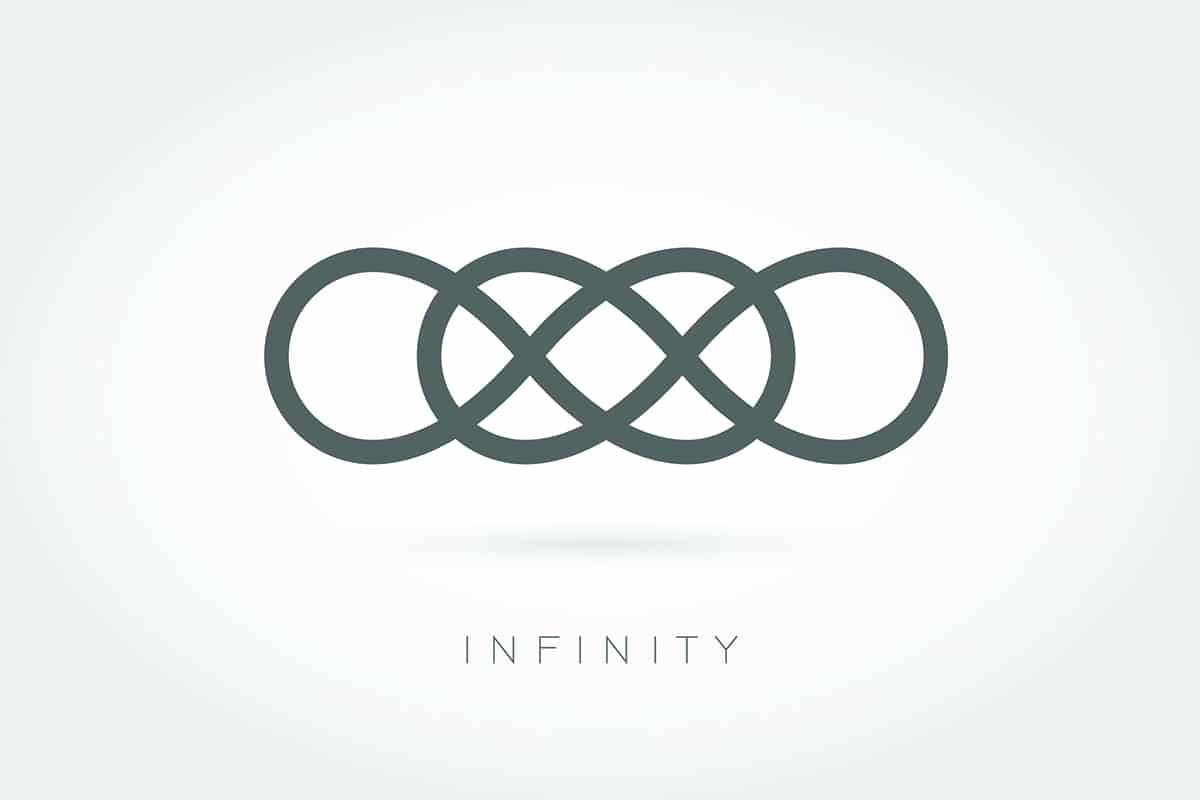 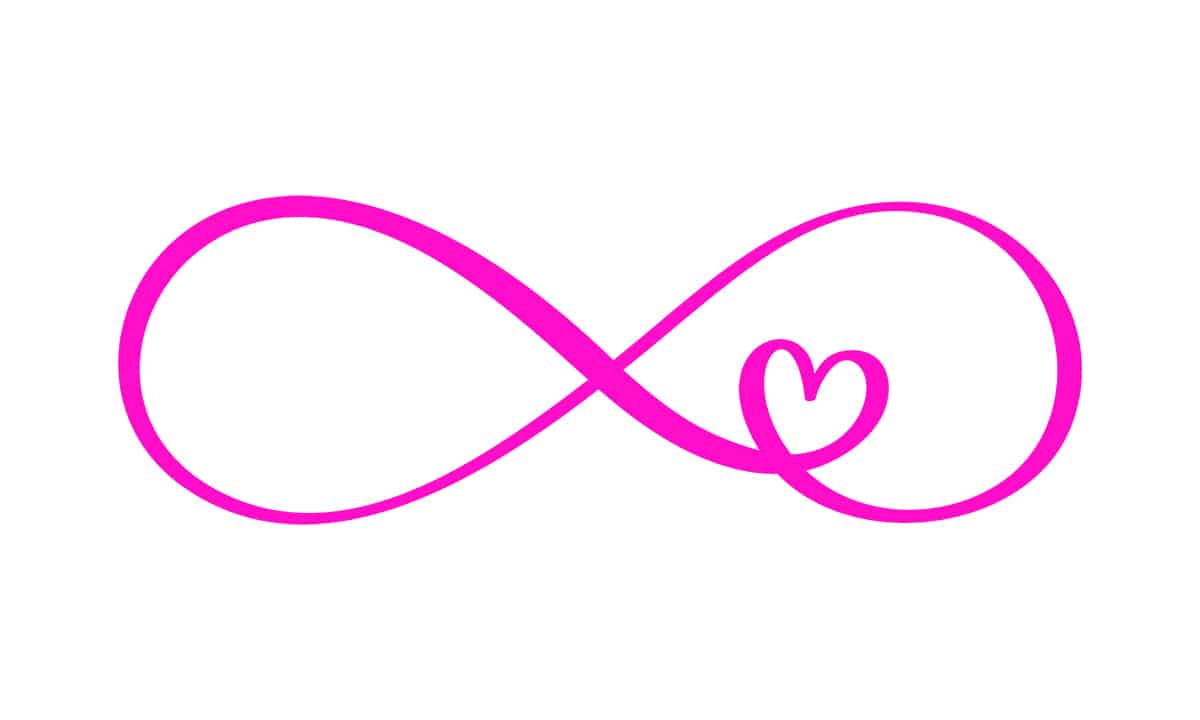 A heart with an infinity symbol inside it may be interpreted in a couple of different directions. It can simply be used to mean a love that has no end between two people.

However, some view the heart with an infinity symbol as referring to a love that is unlimited in other ways. It can therefore be used as a symbol of polyamory, which holds that a person can have romantic love for more than one partner at a time.

A common saying in the polyamory community is that love is infinite, but time and energy are not. That said, the heart with an infinity symbol can mark your quest to find your limits on your own terms.

A Malin symbol, which originated in Sweden, is an infinity symbol that has a broken arrow at the center. Gyllen, a Swedish watch manufacturer that incorporates infinity symbols into its watch designs, explains the Malin as follows: “It means in order to grow, you must experience setbacks and challenges.” 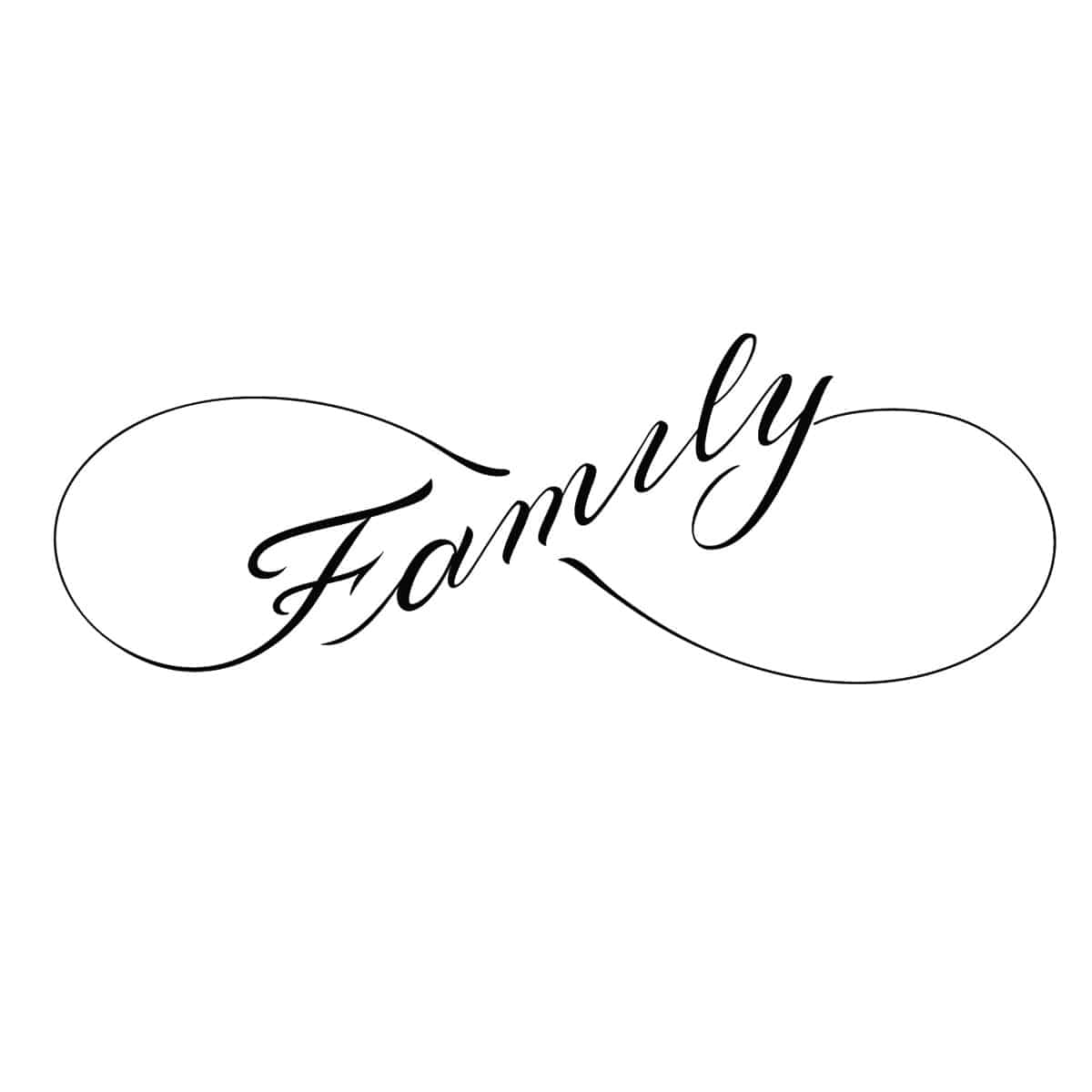 The variations of the infinity symbol described above could make for good infinity symbol tattoos, presuming you know and thoughtfully endorse what the variation you’re considering represents. However, with tattoos, the potential for creativity is truly infinite!

Some ideas for personalizing an infinity symbol tattoo are as follows: 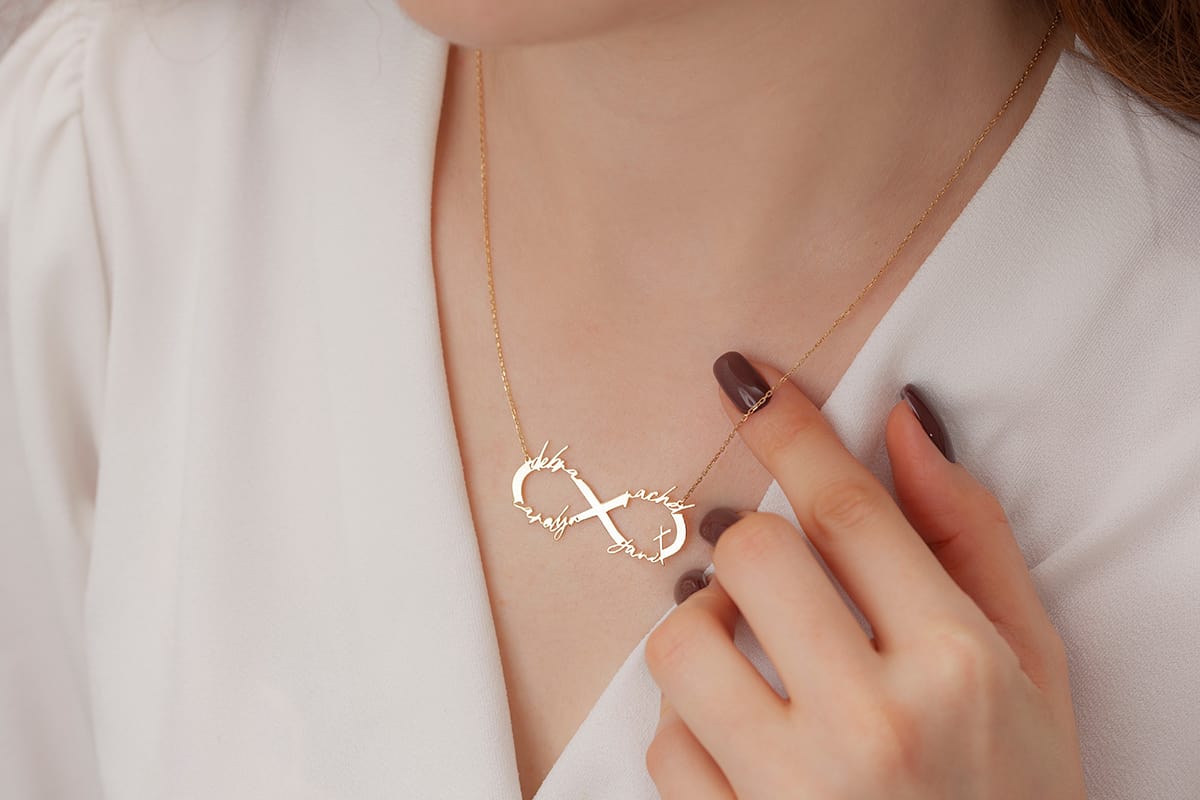 If you’re not ready for the infinite commitment of a permanent tattoo on your skin, you might be happier with some infinity symbol jewelry. Examples include the following:

As much as people complain about life’s limits, perhaps they’re often a little afraid of what it might feel like not to have them. The infinity symbol can represent intense desires that are not easily fulfilled on Earth, as well as ideas too big to easily wrap your mind around.

However, embracing this mystery and power may also encourage you to broaden your perspective past your mundane concerns to infinity and beyond!