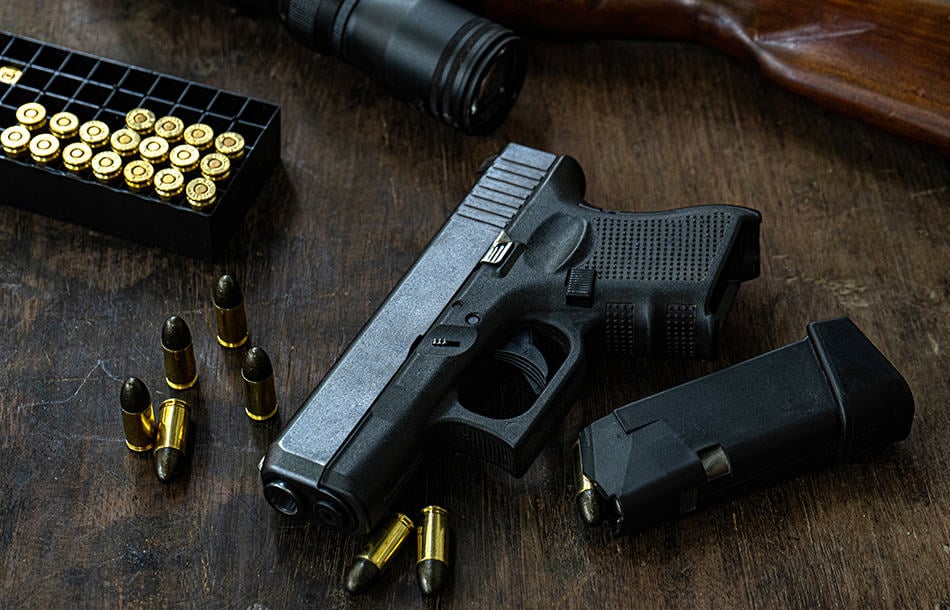 Whether you love guns or hate them, guns are undoubtedly a powerful symbol. Your gun dream, like guns in waking life, may ask you to look at how you and others in your life use the power available to you: do you use it to protect yourself, or do you use it to harm people?

Guns, however, are controversial because they can be used to kill people. Furthermore, some people use the power of guns to initiate aggression rather than to defend themselves. The symbolism associated with predator animals like wolves and attack dogs may therefore be relevant to understanding your gun dream symbol, as humans who use guns grapple with many of the same ethical challenges. 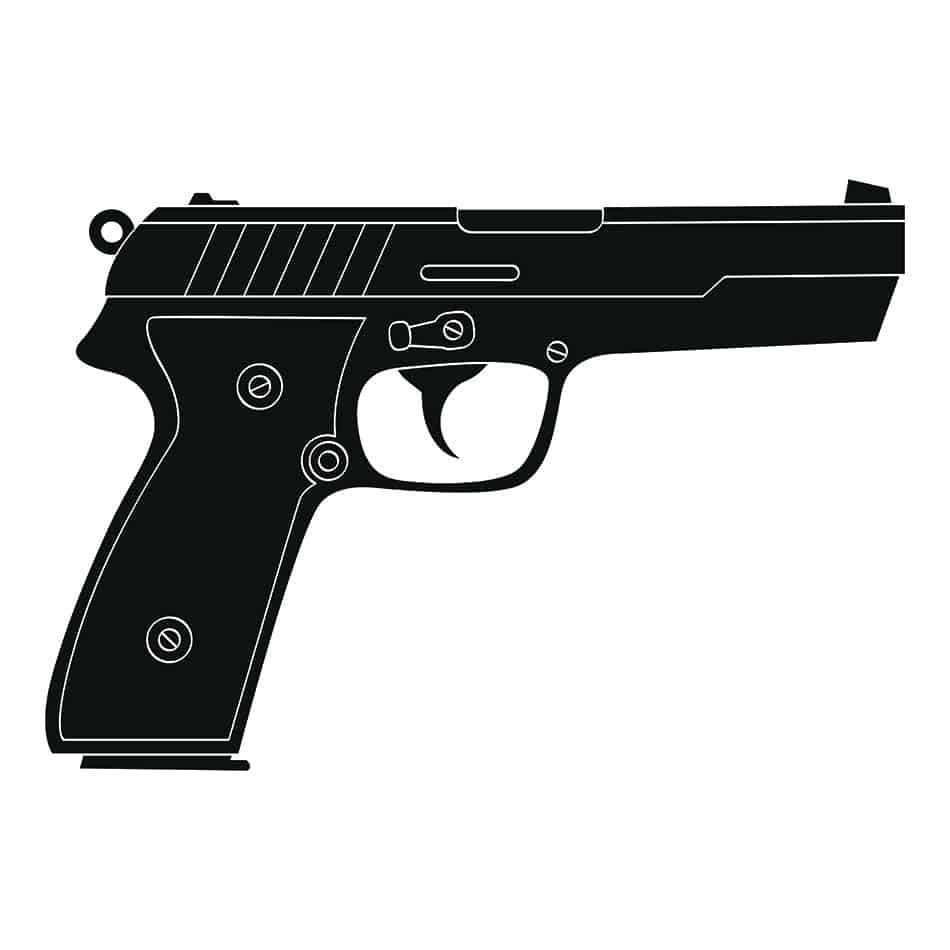 Guns give humans the power to do things they could not with their bodies alone, and some people use this power to harm others. Dreaming of a gun could therefore symbolize that you feel entitled to transcend the boundaries of society and take what you want by force.

Modern technology, however, has made gender issues more complex than they used to be, and guns are part of that as well. For example, some women embrace the idea of guns being the great equalizer, and they feel safer when they carry and know how to use guns to protect themselves from larger men who might physically attack them.

Dream of a gunshot 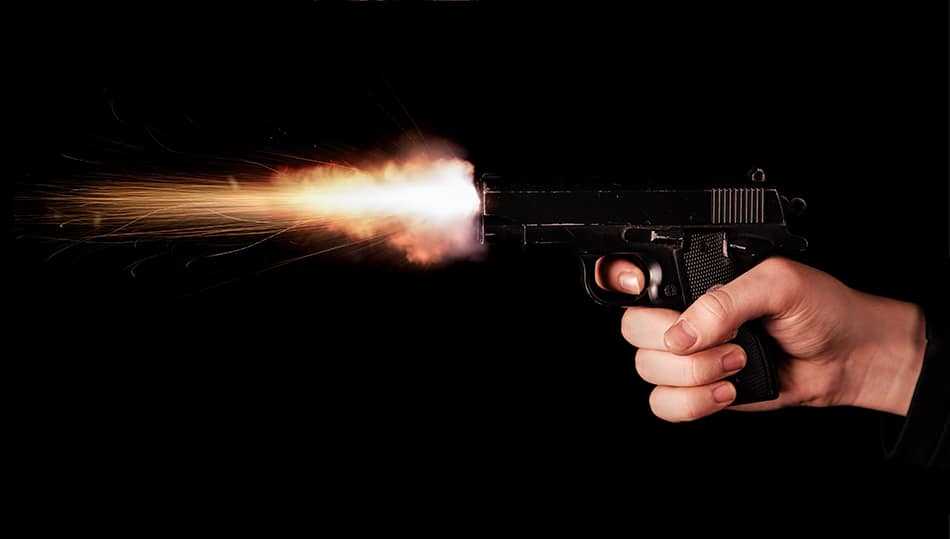 If you dream of hearing a gunshot, and there is not a context of violence or aggression, your gunshot dream meaning could refer to the use of a starting pistol to begin a running or swimming race. The Pink Floyd song “Time,” which generally talks about how people tend to waste time in their lives, refers to this: “No one told you when to run, you missed the starting gun.”

Dreaming of a gunshot could therefore symbolize urgency to move forward on some course of action. If you have been waiting for the right time to do something, this is it.

Dream of buying a gun 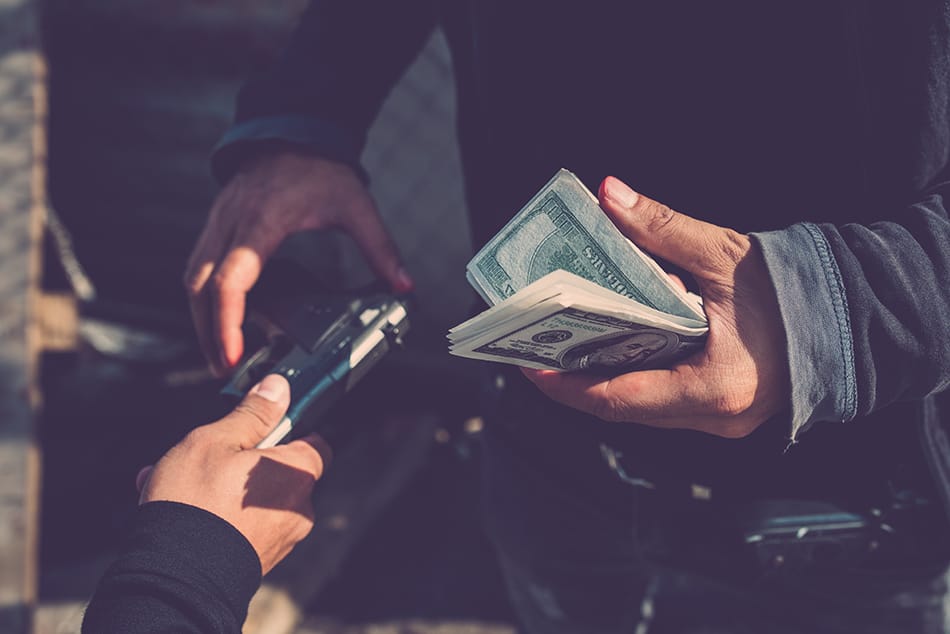 The dream meaning of buying a gun depends on what that act would mean to you in your everyday life. As always, your dreams are trying to communicate with you in a language that you personally understand.

If you regularly buy guns for recreational activities like hunting or target shooting and you have a good feeling buying and using a gun, your dream of buying a new gun could symbolize getting a boost in your pursuit of success. In such a context, your shotgun dream would generally have positive meaning, as it would refer to you doing something that you feel good about.

If buying a gun is not something you would normally do in your waking life, your dream of buying a gun could symbolize that you feel you need to take a more active role in planning for your own safety than you usually do. The provocation for this might be a situation where you fear that your safety is threatened, and you sense that you cannot rely on others to help you.

Dream of hiding a gun 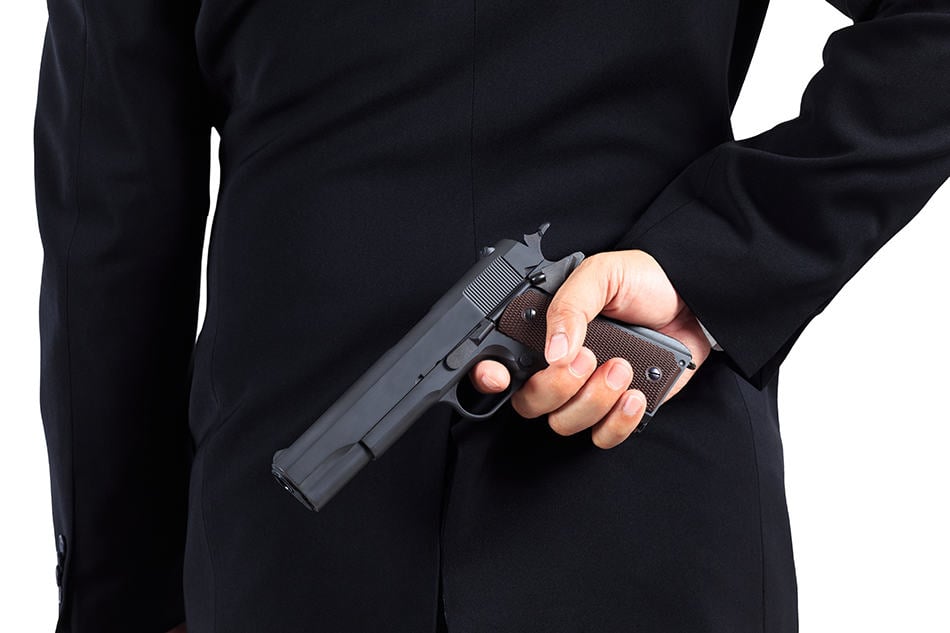 If you dream of hiding a gun that belongs to you (at least in the context of the dream), this could symbolize that you feel you need to conceal your capacity for aggression from others in your life. Whoever you are concerned about would be more likely to attack you if you seemed like a threat, so your safest best is to appear passive and compliant.

If you dream of hiding someone else’s gun, the interpretation would depend on why you were hiding it. If you were hiding the gun to prevent them from attacking you or others, this would suggest that you feel like someone in your life is not a safe person.

If you were hiding someone else’s gun to help them have access to it later, this could refer to a situation where someone in your life trusts you and shows you a side of themselves that they don’t necessarily show to everyone.

Dream of a gunfight 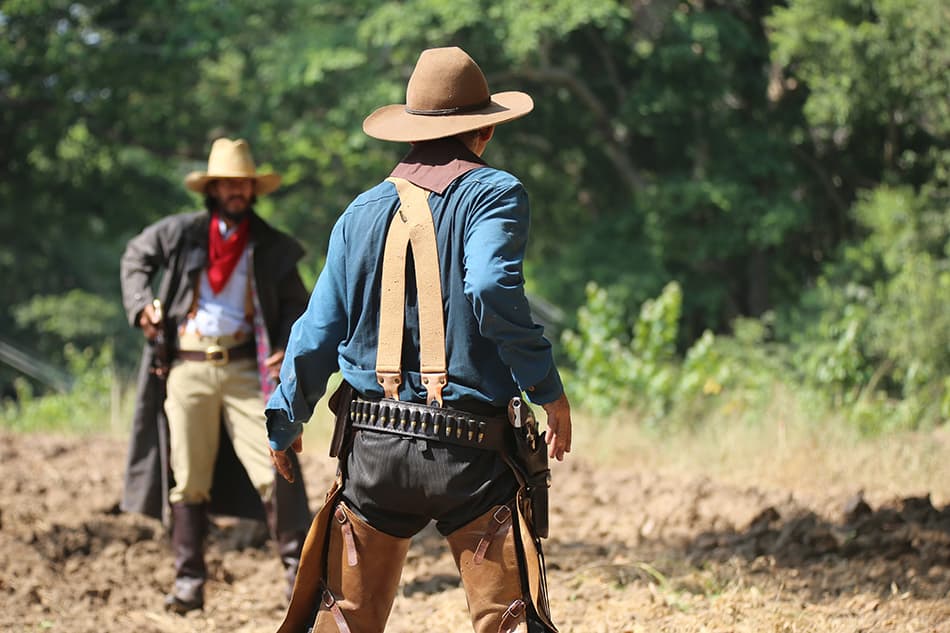 Maybe you are afraid to begin an open discussion with whoever you have the conflict with because you think it would end in violence or at least unpleasantness. The gunfight dream meaning could be that you feel like there is no room for both sides of the conflict to coexist and that one must destroy the other in order to move forward.

Dream of a gun that won’t shoot 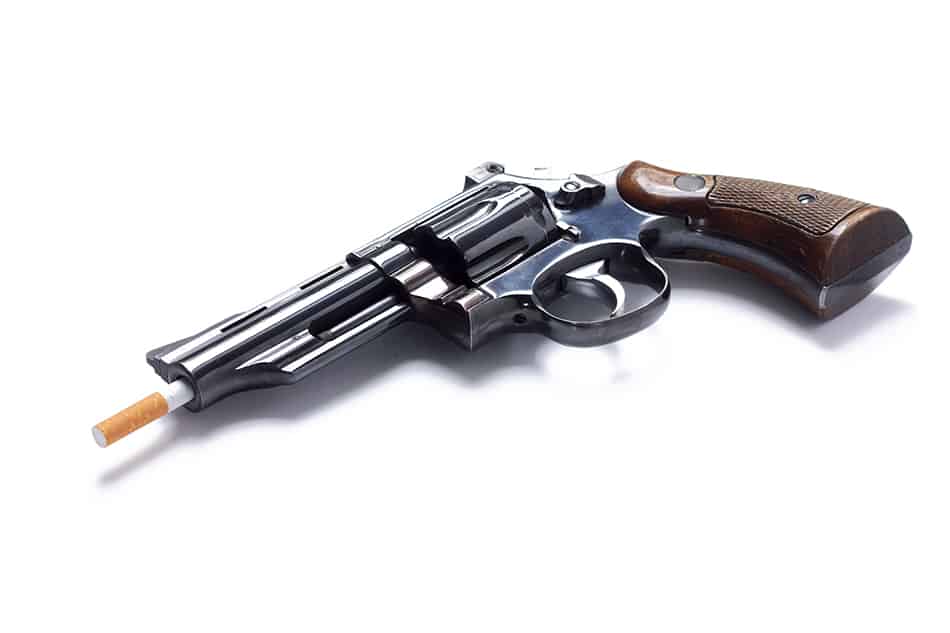 Dreaming of a gun that won’t shoot can symbolize that you feel blocked in taking action in your life. You may feel that others are bullying or oppressing you so that you cannot assert yourself.

A gun can in some cases be a phallic symbol, so a dream of a gun that won’t shoot could refer to a situation where you or your partner struggles with sexual performance. On the other hand, if you are trying to avoid pregnancy, “shooting blanks” could be what you want.

On that topic of sex and fertility, if your gun dream emphasizes bullets or the lack thereof, the bullet dream meaning could have to do with sperm. This could be relevant whether you and your partner are trying to avoid pregnancy or trying to become pregnant.

Dream of a gun pointed at you 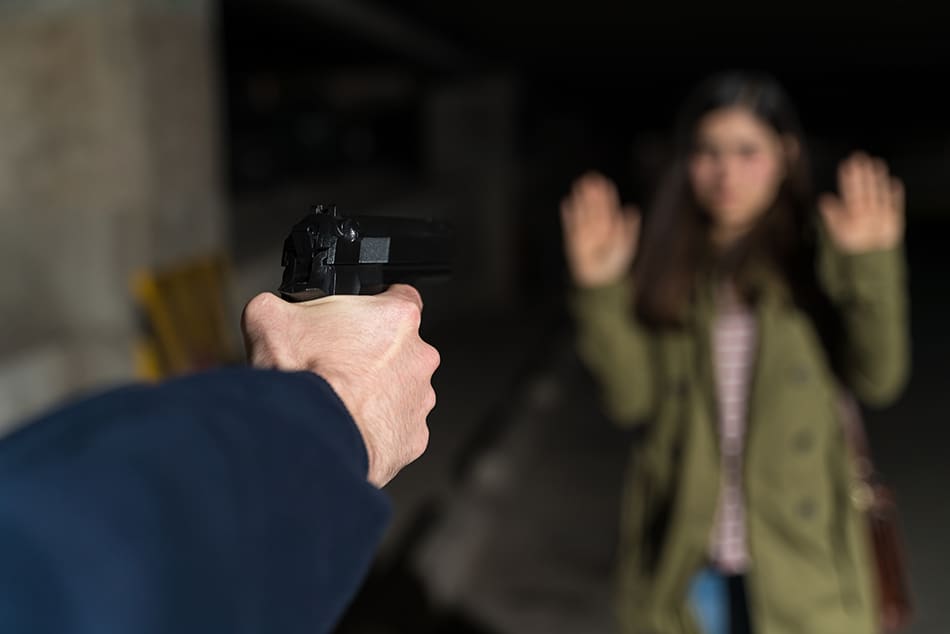 The dream interpretation of a gun pointed at you depends on what led up to it in the dream. Was the person with the gun initiating unprovoked aggression against you, or were they acting in self-defense because you threatened them?

If the person with the gun was engaging in self-defense, you might need to look at how you are treating others. Maybe the dream is a warning that you have crossed someone’s boundaries.

A dream of someone chasing you with a gun, however, would more likely be a dream of someone initiating aggression and danger against you. If it is someone known to you, you might feel that they are hostile toward you and trying to cause trouble for you, even if they do not do it so openly in waking life.

The dream meaning of a gunman unknown to you pointing a gun at you, however, would be that you feel the world, in general, is a hostile, threatening place.

Dream of shooting someone with a gun 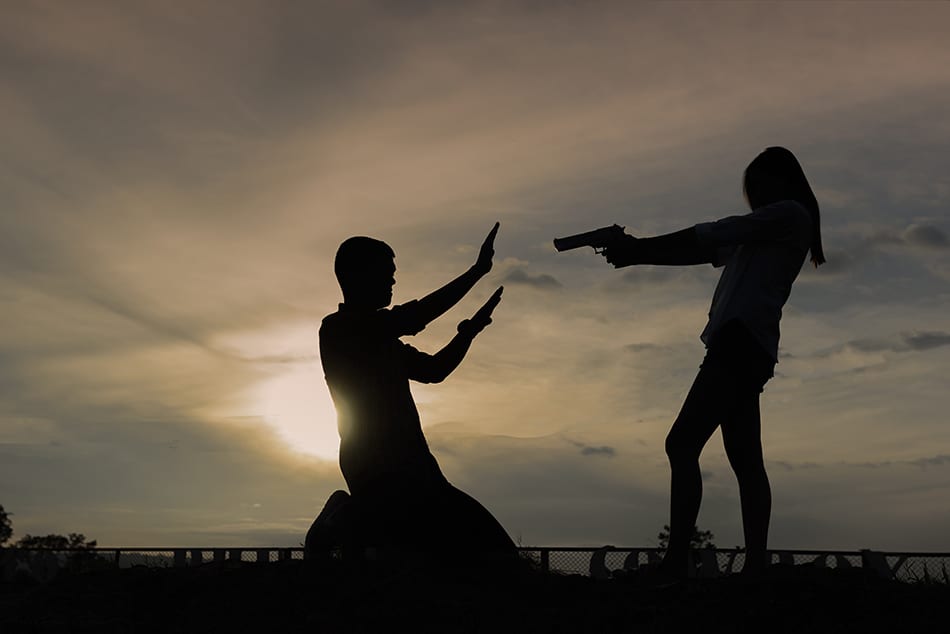 If you dream of shooting someone with a gun, the interpretation depends on whether you did it in self-defense or as an act of aggression. Either way, if the person you shoot in your dream dies, it may also be relevant to look at killing dream symbolism.

If you dream of shooting someone in self-defense, and this succeeds in stopping whatever they were doing to harm you in the dream, this could symbolize that you have the ability to protect yourself from threats in your waking life.

If you dream of shooting someone as an act of aggression, this could symbolize that you have some negative emotions like a wave of hidden anger that you struggle to express.