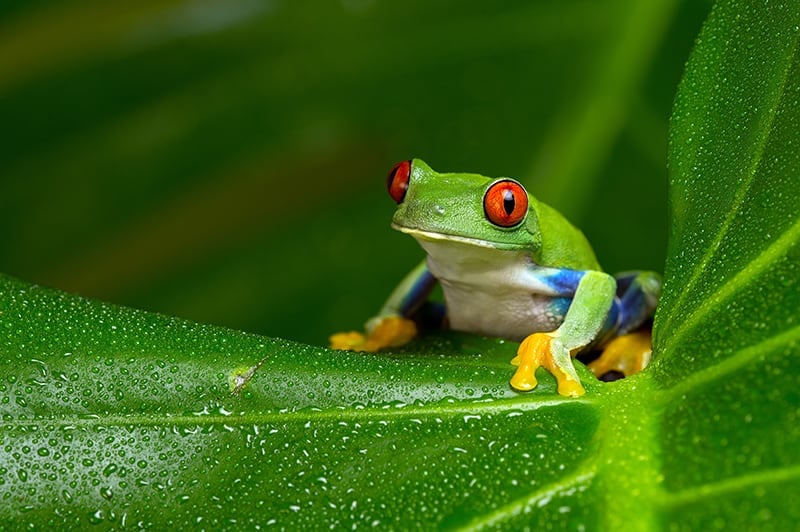 Dreams about frogs are not at all uncommon, and although we don’t give them much thought in our day-to-day life, frogs have a long history in human fables and folk tales.

Many people will also remember frogs as part of a string of Biblical plagues, and pop culture has made reference to a strange and foul notion that one can be cursed to even vomit frogs. However, throughout most of human history, frogs have had mostly positive associations.

One of the first things we learn about frogs as children is that they live both in the water and on land. Their amphibious nature causes us to associate them with adapting in order to survive but not by being duplicitous or underhanded as in the case of the sly fox. Instead, the frog has earned our respect for its ability to transform – not just adapting between earth and water but also when growing up from a tadpole into an adult.

Due to their typical freshwater environs and tendency to sing right before or after a rain, we humans often associate singing frogs as bringers of rain, which can symbolize fertility as well as a certain kind of spiritual cleansing. Being low to the earth, frogs can also symbolize humility and simplicity. However, due to their quick nature, most people also associate frogs with alertness and readiness or spontaneity.

Trying to understand why you’re dreaming about frogs can be tricky. There are many different possible interpretations that depend on a number of things. For instance, did you have a favorite frog-related fairy tale when you were young? How about a stuffed animal or other toys? If so, you should first check in with yourself to see if the frog in your dream represents a very specific character from your early life. If not, then please find your dream in the list of common frog dreams below.

What Do Frogs Symbolize? 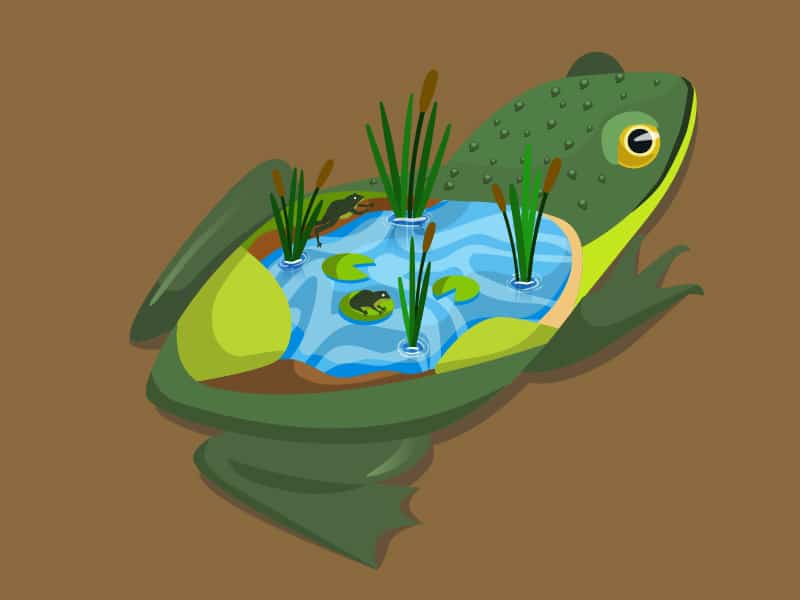 In the entire animal kingdom, one thing that sets frogs apart is their ability to jump. Not only does this attention-getting feat give us the impression of quickness and responsiveness, but the frog’s tongue is also one of the fastest moving we have ever seen and can capture its prey mid-flight. These are quite remarkable traits that have long caused us to associate the frog with its special brand of rapidity in response to stimuli. For athletes and Wall Street traders, this sort of swiftness would be a useful talent indeed.

There are only a few animals in existence that can capture our imagination in that special way only an organism undergoing physical metamorphosis can. We have the same fascination with butterflies, due in large part to the dramatic physical transformation they undergo. It’s a rebirth that bestows upon them the power of flight. In a similar fashion, tadpoles growing into adult frogs also undertake a process of renewal, one that gives them the ability to leave the waters into which they were born and enter an entirely new world on land. For that reason, frogs symbolize transformation and the ability to adapt in order to grow into a new environment.

In addition to the life cycle adaptation of frogs, their ability to live in two locales makes them seem more flexible and agile. Their position at the water’s edge, so to speak, gives them entree into two worlds and official citizenship in both. Although this dual citizenship might be seen as a sneaky character trait in some animals, frogs are seen as signs of purity and their flexibility is therefore seen as a strength.

There are thousands of different species of frogs, and wide varieties can be found all over the earth. That means no matter where you are from, there are probably frog songs that coincide with the falling of rain where you are. Because of our fondness for a rainy serenade, we humans have come to associate frogs with the more pleasant aspects of rainfall. Things like fertility, healing, and cleansing are connected with frogs because of their association with rain.

Frogs are generally harmless to humans and do not compete with us for food. Therefore, we tend to see them as peaceful creatures symbolizing purity associated with the water element and the simplicity of the natural world. Sometimes they might symbolize something special that needs to be protected. Perhaps because they have few natural defenses of their own, we instinctively feel protective of frogs – whether we discover them in the wild or if we happen to find them indoors. From folklore, we have learned that some frogs, when kissed, turn into princes and that if we humans badly behave, we can be turned into frogs as well. Therefore, we usually try to confirm that any frog we encounter is okay, at the very least, before we go on our way.

Dreams about finding a frog 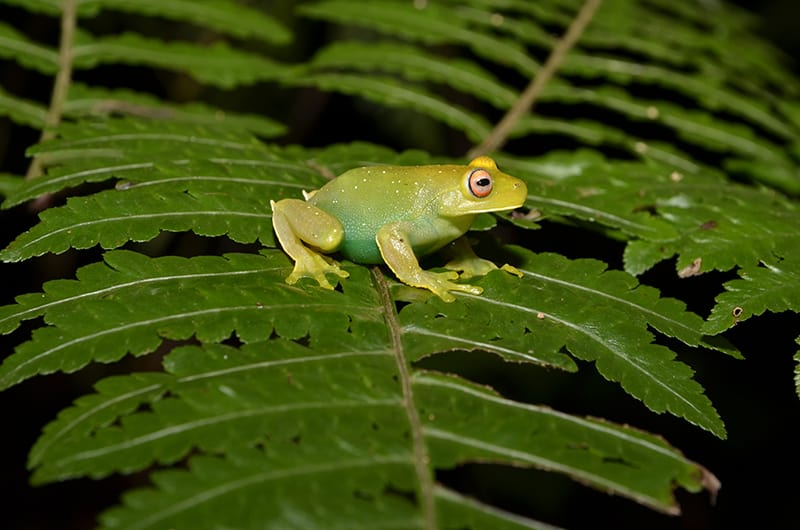 Finding a frog is usually a sign of good luck. To understand its meaning, take note of where the frog was found and other details, such as who found it. If you are the one who found the frog in your dream, then consider who or what might symbolize a special treasure in your life worth protecting. That could be what the frog represents. If there’s nothing like that in your life now, then finding that frog in your dream could be a sign that it’s on its way.

Dreams about a talking frog

When we dream about talking animals, we are communing directly with the wild aspect of our own nature. This is not the same kind of wild animal as that side of you who parties too hard on the weekends, though. This aspect is about understanding things intuitively, respecting the seasons and their meanings, connecting with the wider universe, and even sensing when that fly is just close enough to catch with a flick of the tongue. In this case, dreaming of talking frogs could represent some elemental wisdom in your own psyche that is trying to break through and communicate with your conscious self. It is generally a positive sign of good luck to come.

Dreams about a jumping frog 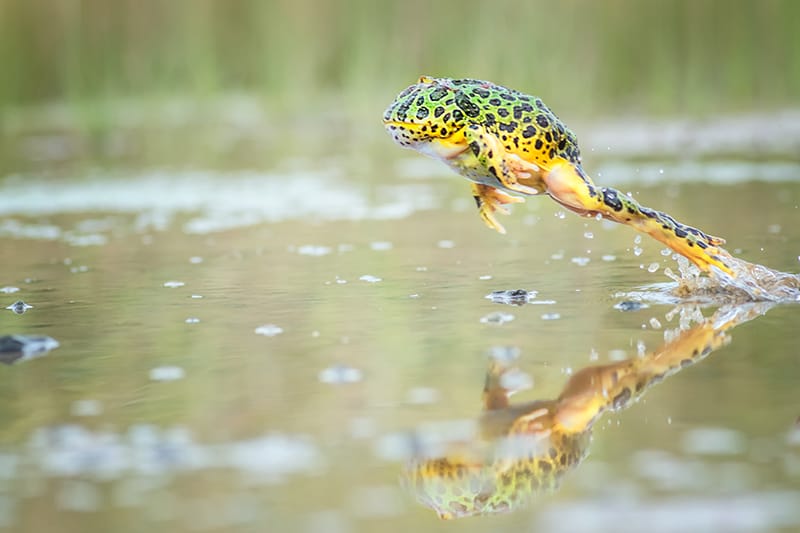 Jumping frogs may be trying to get your attention. The more jumping frogs in your dream, the harder you have probably been working to ignore the problem they represent. Take note of any contextual clues about the jumping frogs to help with your dream interpretation. A single jumping frog probably indicates a situation or problem of which you are very much aware. You may even be taking steps to address it and yet your psyche has that nagging feeling of something that has gone overlooked. On the other hand, multitudes of jumping frogs that chase you or overcome you is a strong indication that whatever you are trying to ignore is getting the better of you. It may be a good time to turn around and face your problems.

Dreams about a frog dying

The death of a frog is a sign of loss and grief. As previously stated, frogs are signs of something special, something helpless and harmless that needs our protection and brings us luck. Therefore a dream about the death of a frog signifies the loss of something precious. Whether the loss is through an actual death or maybe a change in relationship status, or even something else intangible, like a scholarship or promotion, the dream is telling us how we feel about losing it. Paying attention to those feelings may allow us to process what’s too difficult to deal with in our conscious lives.

Dreams about a frog hiding 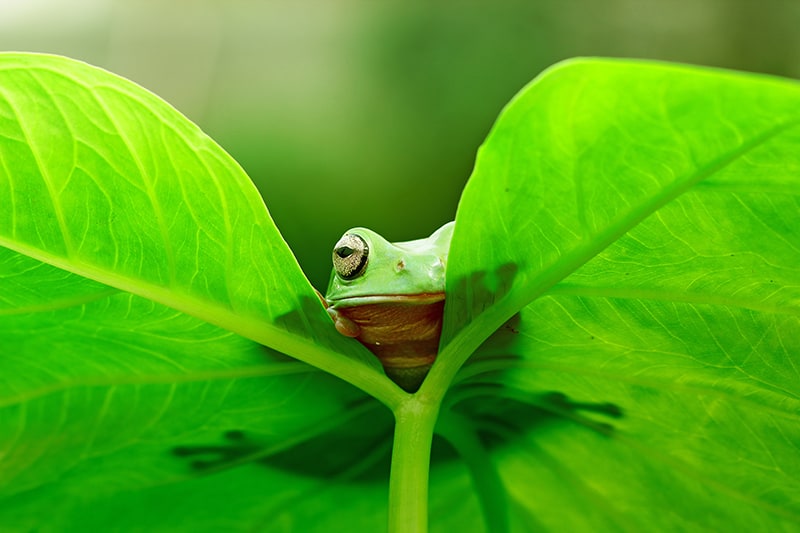 Frogs hiding in the grass or amongst the rocks is an indication that something special is hiding in plain sight – or that you need to be more careful and hide something that’s special to you. This could mean you’re around someone who makes you uneasy right now and you need to hide your talents, or it could be that you’ve been looking for something you place a lot of value on and the frog in your dream is showing you where to find it. Pay close attention to how you feel when you see the hiding frog in your dream to help you determine how to interpret its meaning.

Dreams about eating a frog 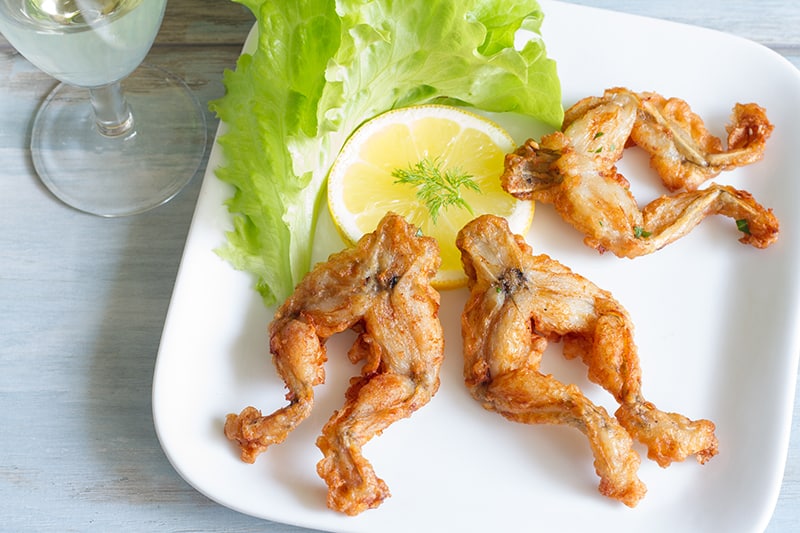 In some parts of the world, frogs are eaten as part of a normal diet. However, they have little to offer in the way of meat. Therefore, dreams about eating a frog are not typically associated with a simple dinner. Instead, ingesting a frog in your dream could mean that you’ve captured a special opportunity and you are wanting to keep it to yourself. It could also be that you are feasting on the good luck brought on by the frog. In either case, it’s about fulfillment and satisfaction that goes beyond simple nutritional sustenance.

Dreams about frogs in the water 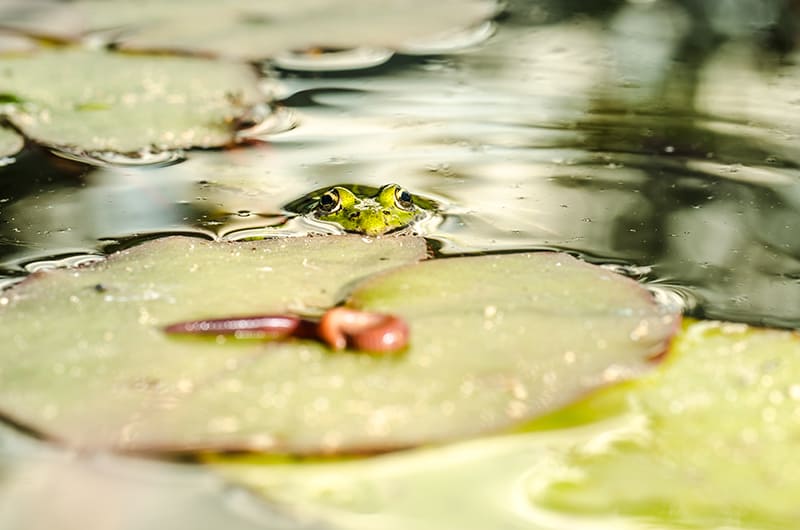 As mentioned above, frogs are associated with water both in the form of freshwater streams and rivers and in the form of rain. However, when water figures prominently in a dream about a frog, providing an environment or backdrop for the image, it could simply indicate that the frog is an adult. In that way, a frog in water symbolizes maturity. Some also say that it’s a sign of travel or unexpected company.

Dreams about multitudes of frogs 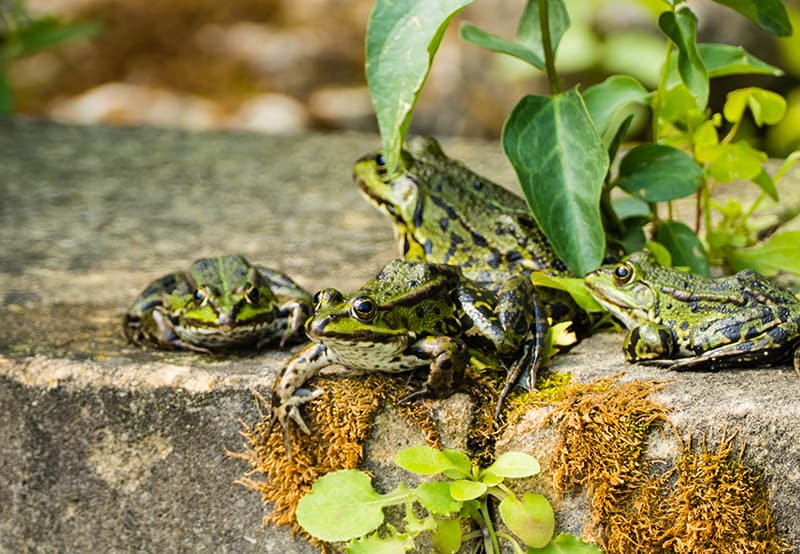 One frog may be delightful, but no one ever asked for millions. That’s because they are thought of more commonly as a plague whenever frogs appear in large numbers. Consider the undulating throngs of frog bodies that would have been involved in the Biblical plague in ancient Egypt. Individuals would be jumping all over one another, competing for dominance. Therefore, multitudes of frogs showing up in a dream could symbolize the feeling of losing one’s own individual identity to the mob and the need to compete to survive. They could also represent a nagging but overwhelming feeling you’ve been trying to ignore.

Dreams about vomiting up frogs

One lovely image brought to us by pop culture is the figure of one character in a recent fantasy novel vomiting up frogs. This was the result of a nasty spell that had been cast on the poor child, and it generated the anticipated amount of revulsion in its readers. However, some people now report dreaming about this phenomenon and are curious about what it might mean. Given the context of the phenomenon, such a dream could mean that you’re feeling you’ve been cursed or unfairly burdened and are unable to say so. On the other hand, it could be that you’ve previously acquired something you once thought was good luck and are now ready to get rid of it.

Frogs have lived in harmony with humankind for millions of years. During that time, we’ve established a rapport with the tiny creatures and a curiosity about their lifecycle that still inspires and delights many a future scientist today. To us, they symbolize a lucky and pure aspect of nature associated with the water element and with transformation. No matter how a frog shows up in your dream, its meaning and interpretation are fairly consistent. You should always consider yourself lucky to have been visited by a frog. 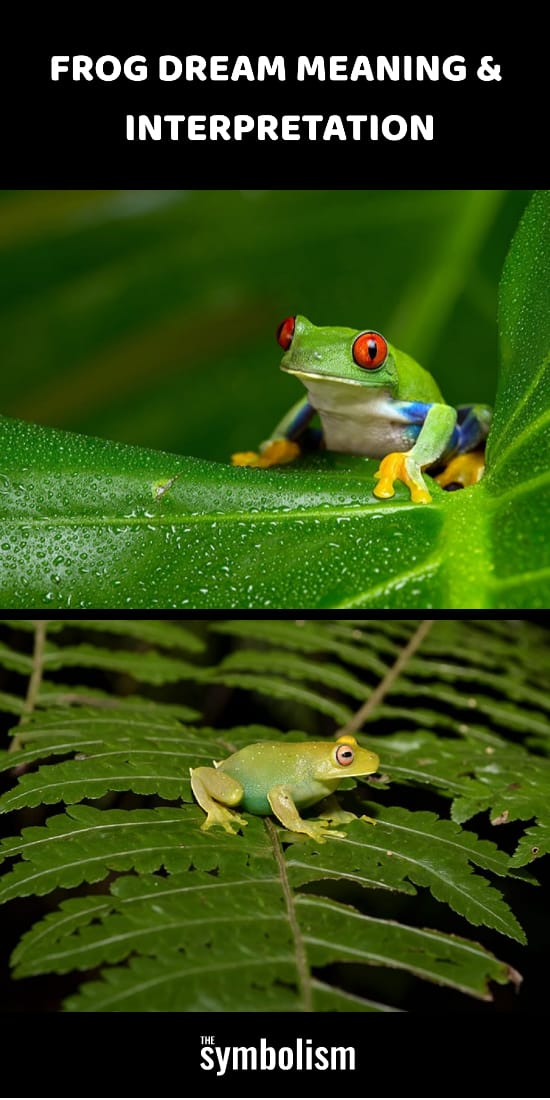