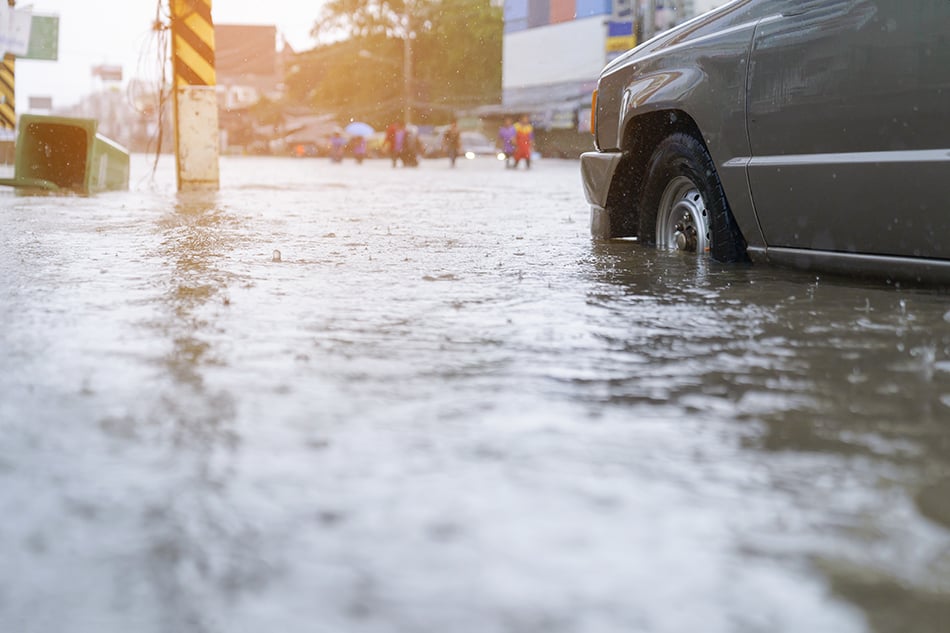 Dreaming of a flood can be scary. In some cases, it can feel cleansing.

Either way, flood dreams share much of their powerful symbolism with other water dreams.

A flood is typically made of water, so flood dream symbolism overlaps substantially with the symbolism of water as noted at Dream about Water – Interpretation & Meaning. This water symbolism includes emotions, the unconscious, creation, and destruction.

Floods, however, are water out of control, so they interpret the basic symbolism of water in a destructive way. A dream of flooding water symbolizes that emotions and unconscious material lack boundaries in your life, so they are causing trouble. 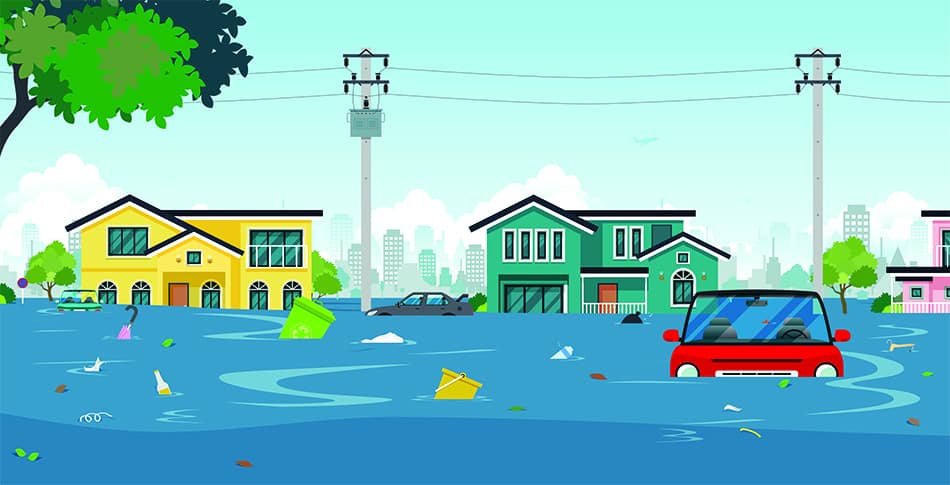 Water symbolizes the flow of emotions. In a swimming pool, or even a river, there is some containment of the water, as discussed in What Does It Mean to Dream of Swimming?

In a flood, though, the water is totally uncontained. Your flood dream could therefore symbolize that you or someone else in your life has intense emotions that seem overwhelming right now, and the outpourings affect everyone in their path. You could find yourself bending over backwards to avoid triggering this person because, once they get going, there’s no end to how upset they get.

In short, the flood dream is generally a situation where you are afraid of emotions. In addition to the notoriously volatile person, a flood dream could also refer to the notoriously quiet person who has held back so much for so long that, when the dam finally breaks for any little thing at all, it will inevitably be a flood.

A flood dream can symbolize that you are beginning to become aware of dimensions of life that many people are oblivious to. This could be psychic or intuitive powers, but it does not have to go to that extreme – even becoming more aware of psychology or spirituality can have this disruptive effect in your life at first.

Unfortunately, the process by which people become aware of these kinds of things is often as awkward as puberty, and they may not even have peers going through it with them. When you are flooded with a new view of the world, it can, like any other flood, lack boundaries, and you might struggle to learn how to share your insights with others without scaring them.

A flood can be terrifying because it is destructive and hard to control. Dreaming of a flood can therefore symbolize that you are afraid of the behavior of someone else in your life who is unpredictable and easily set off.

Alternately, a flood dream could symbolize that you are afraid that you might not be able to control your own behavior. You might feel like you are about to explode and go off on someone.

If the emotional atmosphere of the flood dream actually feels good, though, this could symbolize that you need to let yourself be a little bit out of control. This could refer to a context of creative work, as sometimes the best creative output happens when you let go of your idea of how things are supposed to turn out and just let the process flow naturally.

Yes, water has a lot of deep symbolic meanings. With any dream featuring water, though, it is necessary to point out that it might not be that complicated. If you wake up from a flood dream or other water dream urgently needing to urinate, your dream was probably just picking up on your physical sensations related to that.

In a famous Bible story, God sent a flood to destroy the Earth on the grounds “that the wickedness of humankind was great in the earth, and that every inclination of the thoughts of their hearts was only evil continually.” A small group of people, the family of Noah, was spared from the destruction, and they then repopulated the Earth after the flood.

Interestingly, many of the world’s cultures have similar stories of a great flood with a few survivors, as reported by PBS.

Dreaming of a flood could therefore symbolize a situation in your life where you feel like things have gotten so messed up that you just want to start over entirely. In this sense, a flood dream could feel like a relief, as it would give you an opportunity for the renewal you seek.

Being born involves emerging from a watery womb, so a dream of starting over after a great flood could symbolize a rebirth reminiscent of your initial birth.

The meaning of dreams about a flooding house can depend on where the flood came from.

A dream of a flood outside the house that comes into the house symbolizes that problems in the outside world are encroaching upon your household. Maybe someone in your larger circle of acquaintances, like an employer or a member of your extended family, is causing drama that people in your home are upset about – or maybe an event on a national or even global scale is affecting you personally.

If you have actually lived through the event of a flood coming into your house from the outside, your dreams of that sort could just be processing the trauma of the event.

Dream of a flooded bathroom 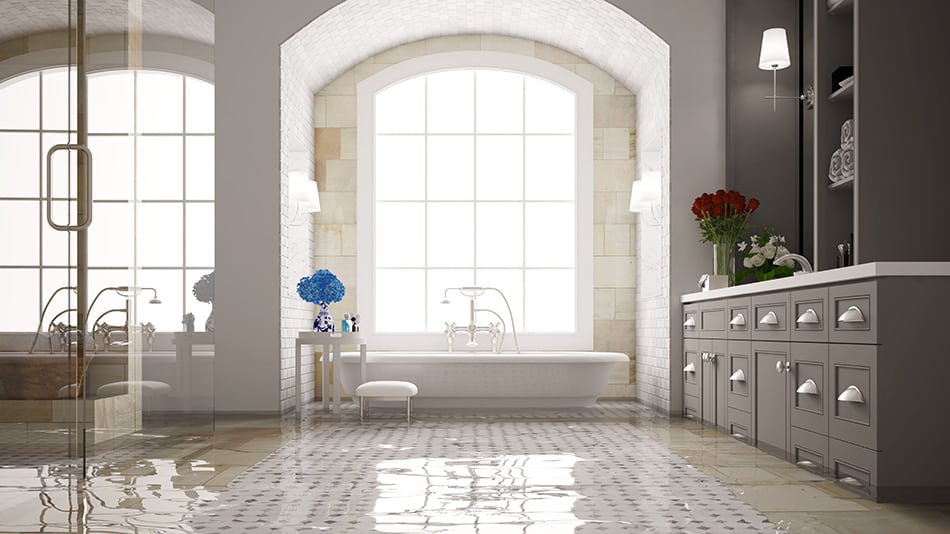 A flooded bathroom dream could symbolize that you have trouble expressing your emotions. A bathroom is supposed to be a safe place to let it all go, but, if even that is blocked, you might feel like you have no outlet for what is building inside you.

The flooded toilet dream meaning specifically could refer to difficulty expressing emotions. It could also refer to a sort of dream common when you actually need to urinate, when you are looking for a toilet in your dream but can’t find one that is usable. See also What Does It Mean to Dream of a House? 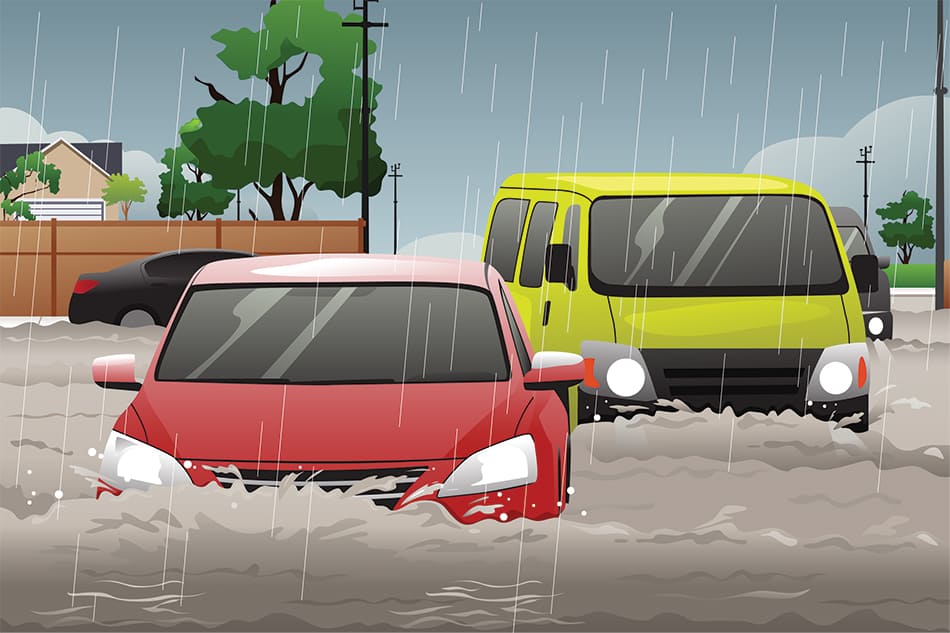 Dreams about flooded roads symbolize that emotional issues might be preventing you from getting where you need to go in life. For example, you might feel that you need to change jobs for your own professional advancement, but you are terrified that your current boss will have an uncontrollable emotional meltdown if you give notice to quit.

To continue this example scenario, though, if you commit to staying in your current job forever to prevent your boss from having a meltdown, your own emotions about your professional advancement being blocked might build to the point that you have a meltdown. The only way through your situation may be that someone has to get their feelings hurt.

Dream of a flooded river 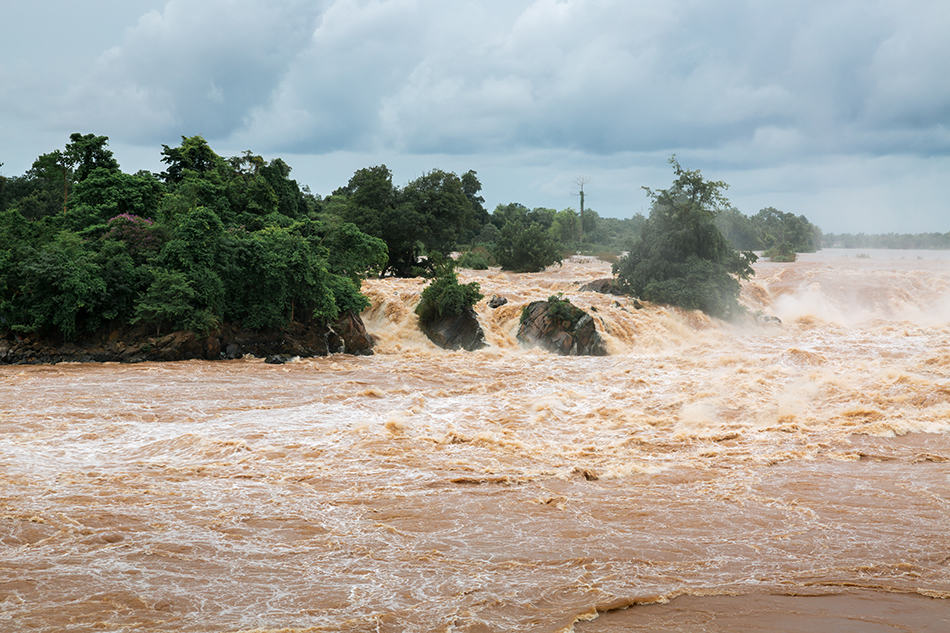 A river is normally a body of water that has predictable boundaries. Dreaming of a flooded river could therefore symbolize that someone in your life who is usually reliable and stable has been pushed beyond their limits due to exceptional circumstances. You could be in this position yourself.

A dream about crossing a flooded river could symbolize that you are trying to go on with your normal business in spite of some major disruption. In some cases, toughing it out and going on with your business is the right answer.

In other cases, you really do need to honor the disruption and change your plans accordingly. It can be hard to tell the difference in waking life, but how crossing the river goes for you in your dream can give you some guidance.

If trying to cross a flooded river ends badly for you in your dream, you need to stop your regular plans and give your full attention to dealing with the problem that has come up for you. As inconvenient as this may seem in the moment, you need to deal with the disruption before it becomes even bigger.

Dream of a flash flood 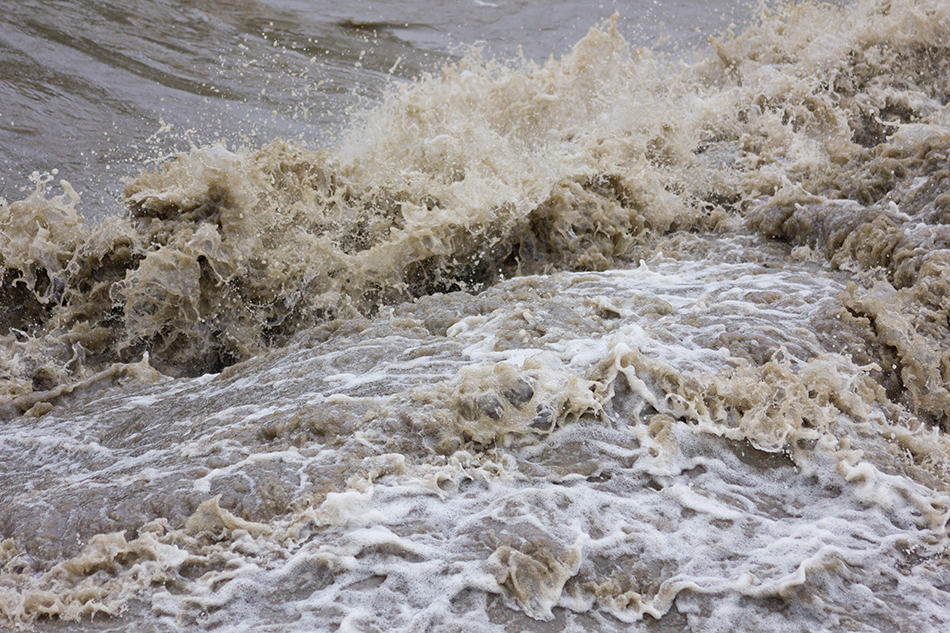 If you dream of a destructive flash flood that seems to come out of nowhere, the flash flood dream meaning could have to do with any upsetting situation in your life that has caught you by surprise. It is more likely to be someone else’s emotional outburst that has shocked you in this way, as most people know if something is brewing with their own emotions. If you tend to lack awareness of your own emotions, however, it could be about your own emotional outburst.

The National Weather Service in the United States says that flash floods are most often caused by extremely heavy rainfall from thunderstorms, though mudslides or breaks in dams or levees can also cause them. If you dream of heavy rain and flood in this way, this could symbolize that you feel like you are under attack from some circumstance in your life and therefore pushed to the point of exploding.

Dream of dirty water in a flood 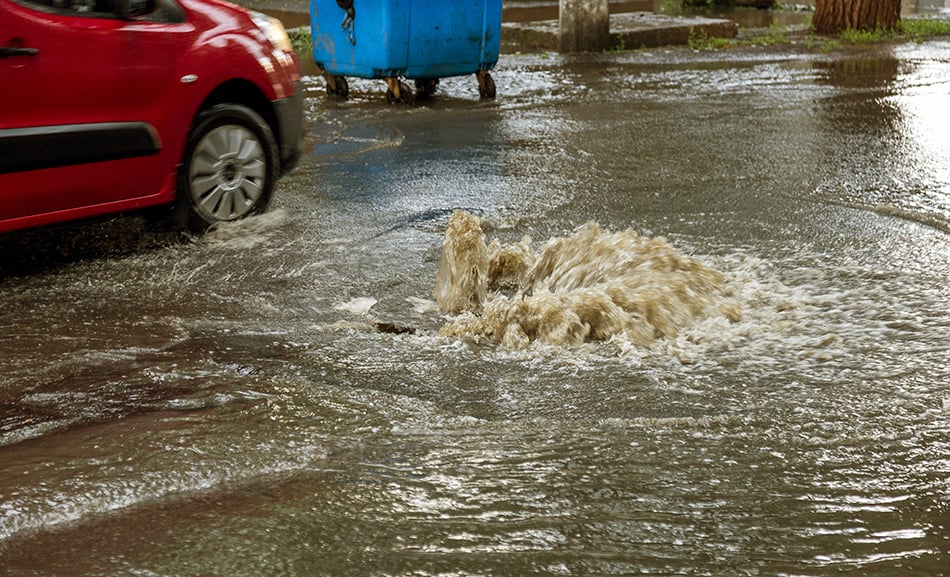 A dirty water flood dream meaning could have to do with messy emotions that have been stirred up in your life.

You might be recovering from an emotional outburst that you or someone else in your life had recently. Even if you know on some level that the emotional release needed to happen for the long-term greater good, what is coming out in the moment is dark and disruptive.

If you have not had an emotional explosion yet, but you feel like one might be coming, a dream of dirty water in a flood could be a warning that you need to talk to someone about what is brewing in you before you blow up. Dirty water can be dangerous, so finding a way to resolve the tension before it gets to the point of a messy explosion would be better for the safety of everyone involved.

Dream of drowning in a flood 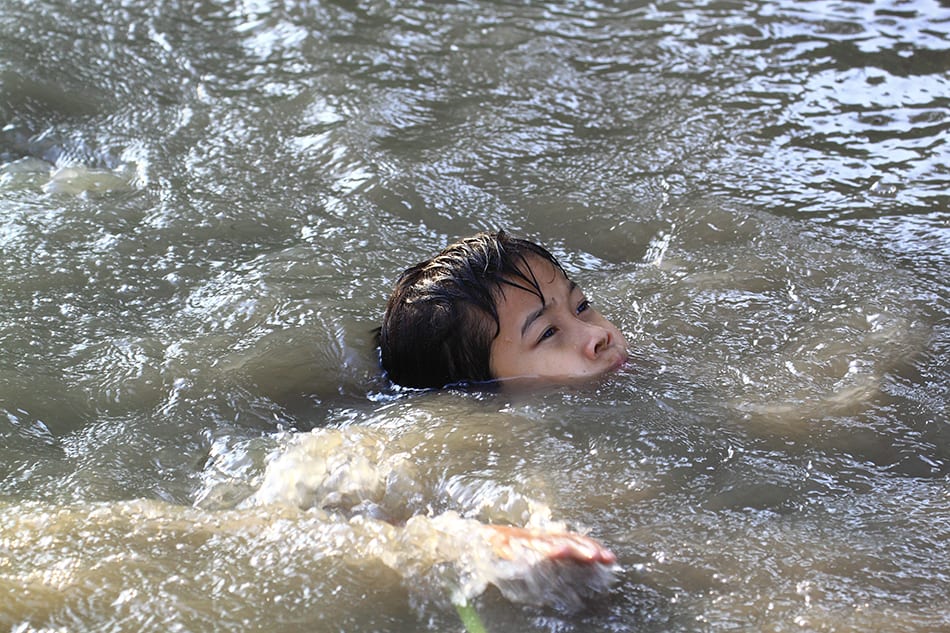 If you dream of drowning in a flood, this shows that you are afraid of a catastrophic outcome if you let your emotions out. It is reminiscent of a scene in Alice’s Adventures in Wonderland when Alice, overwhelmed by the bizarre changes that have happened to her, cries so much that she nearly drowns in her own tears.

Alternately, you could feel this overwhelmed by the emotions of someone else in your life, where they seem to be demonstratively miserable no matter what you do. You might be frantically trying to hold back the flood.

If the flood happens, and you drown, then what happens? A dream of drowning in a flood could be a good omen in the sense that the Tarot card Ten of Swords can be a good omen: if you finally hit bottom and experience the worst-case scenario, things can’t get any worse, so you have the potential for rebirth and renewal after that.

Flood dreams most commonly symbolize emotions that have built up to a crisis point. If you have not yet had the emotional explosion, the flood dream can serve as a warning that you need to find someone to talk to about whatever is troubling you before you blow up.

If the emotional explosion has already happened, however, your flood dream can guide you toward finding a way to recover from the damage. As many of the world’s cultures have taught, life can begin anew after a great flood.