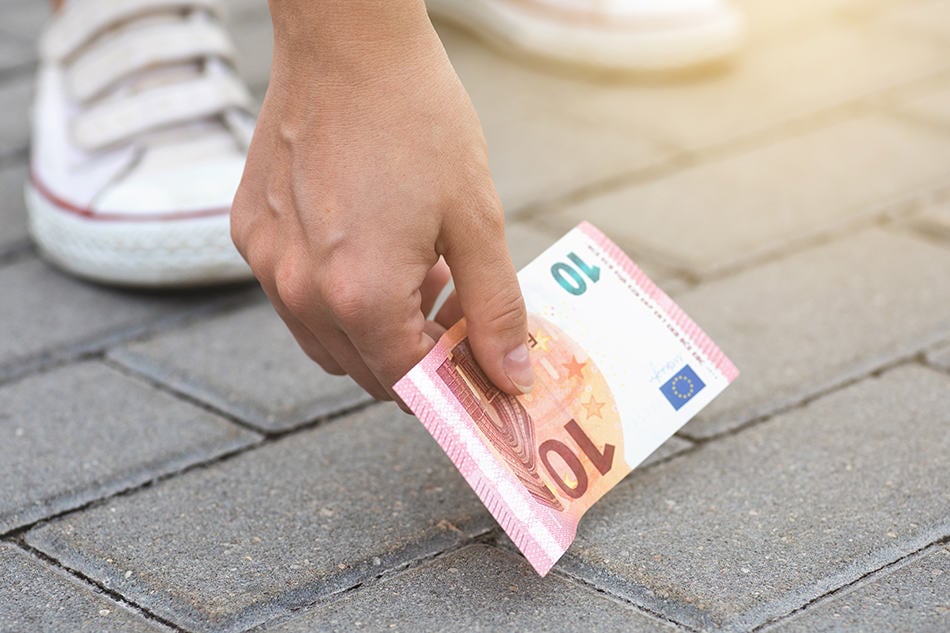 Finding money is a common fantasy in waking life. Many people would like to find a wad of cash big enough to solve their financial problems.

If you dream of finding money, it might not be quite the same financially as finding money in waking life. It can, however, show that you are supported in ways you may not know about.

Money is associated with power, self-worth, and success, as described in Money Dream Meanings & Interpretation. The idea is generally that people who have a lot of money earned it by their own effort, and that is why they deserve to be thought of as powerful, worthy, and successful.

To simply find money that you did not work for, however, can break this tidy link between money and effort. Dreaming of finding money therefore symbolizes that the give and take of life is more complex than it sometimes appears.

Dreams of finding money can symbolize that you will be provided for, or that good deeds you have done will come back to benefit you in some way. They can even suggest that a deceased loved one, or the spiritual realm in general, is looking out for you. 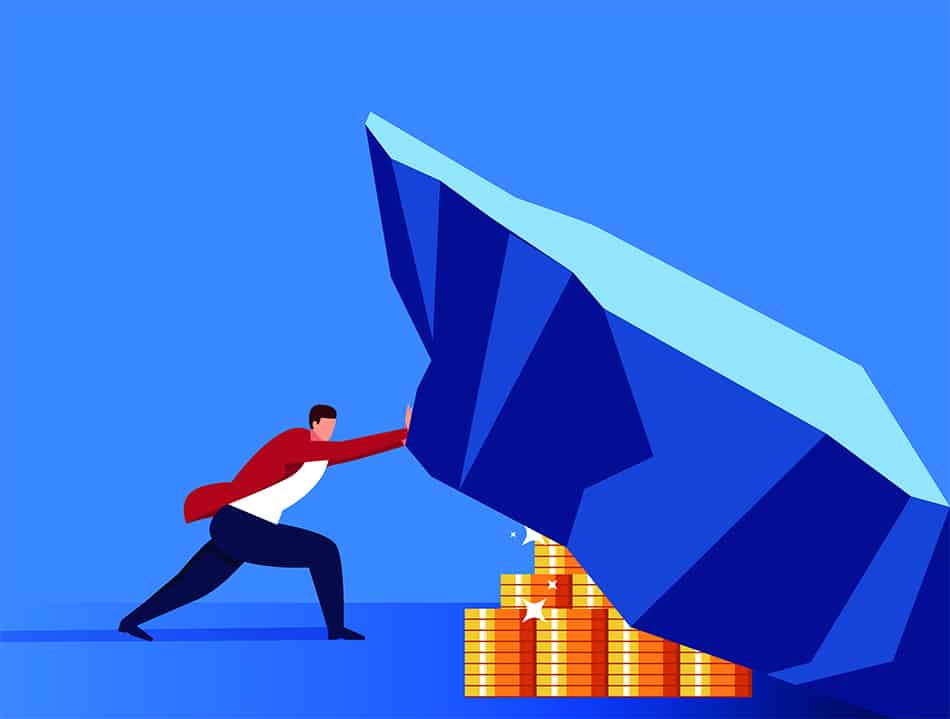 If you dream of finding money when you need it, this could symbolize that your needs will be provided for, perhaps in surprising ways.

Who doesn’t want to find money, though? A dream of finding money could definitely be an expression of dream pioneer Sigmund Freud’s saying that a dream is the fulfillment of a wish.

Dreaming of finding money could also symbolize being passive in your approach to money or to something else in your life. Being passive is not always wrong, but it can reach a point where you don’t take any responsibility for your life and don’t do anything to help yourself because you are waiting for someone else to take care of you.

If you find money on the ground, or somewhere else that it does not belong, it is possible that carelessness caused the money to wind up there. A dream about finding money on the ground could therefore symbolize that you or someone else in your life is not taking care of their resources in the way that they should be.

This dream could symbolize a situation where you might benefit from the carelessness of others.

If you dream of finding a specific amount of money, the numbers involved could be symbolic of some quality you need to integrate into your life. For more information, see What Does It Mean if You Dream About Numbers?

Dream of finding money in dirt 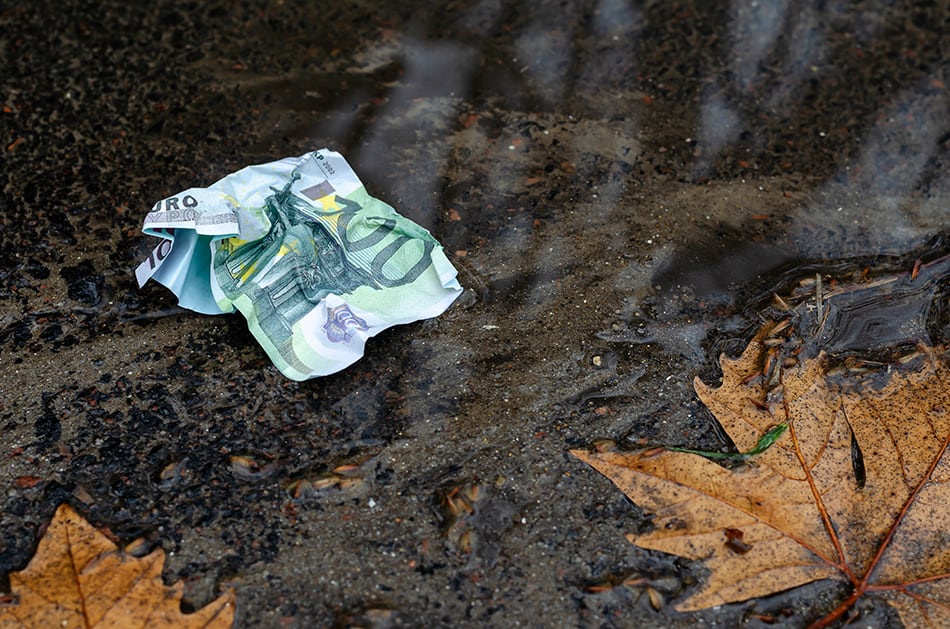 A dream of finding money in dirt could symbolize that you have concerns about the ethics of how you or someone else in your life makes money. Maybe a controversial profession is involved, or maybe someone is giving you a gift of money with strings attached in the form of manipulative conditions. Either way, it feels like “dirty money.”

Alternately, your dream of finding money in dirt could symbolize that there are resources available to you in places you would not expect. If you look for buried treasure or its equivalents, you might find it.

Dream of finding money in sand 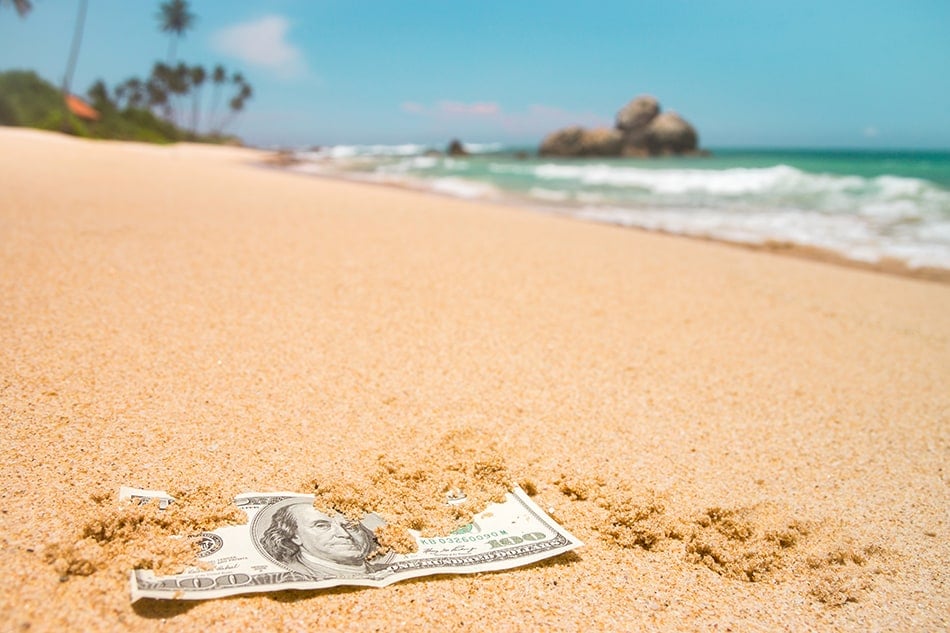 The problem with losing anything in sand is that it is hard to find it again because sand moves around so much. Dreaming of finding money in sand therefore symbolizes that something you lost in a way where you were unlikely to get it back could make a surprise return.

The image of finding money in sand also brings up the idea of a mirage. The Young People’s Trust for the Environment explains that a mirage is a phenomenon where you think you see water, usually in a desert, due to light passing through two layers of air with different temperatures.

Dreaming of finding money in sand could therefore suggest there is something illusory or deceptive about a financial opportunity you are considering.

Dream of finding coins on the ground 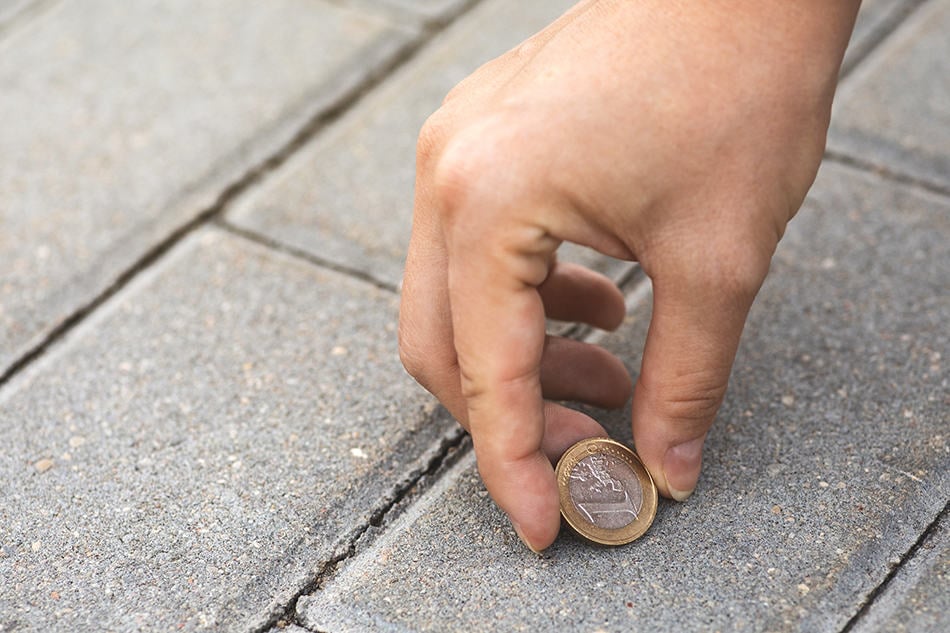 Some people associate finding coins on the ground in waking life with receiving messages from deceased loved ones. This would especially be the case if there was a connection like the year on the coin being the year that the person in question was born, died, or experienced some other significant event.

If you associate finding coins with things like this in your waking life, the finding coins on the ground dream meaning would be pretty similar. A deceased loved one, or just the spiritual realm in general, is looking out for you. 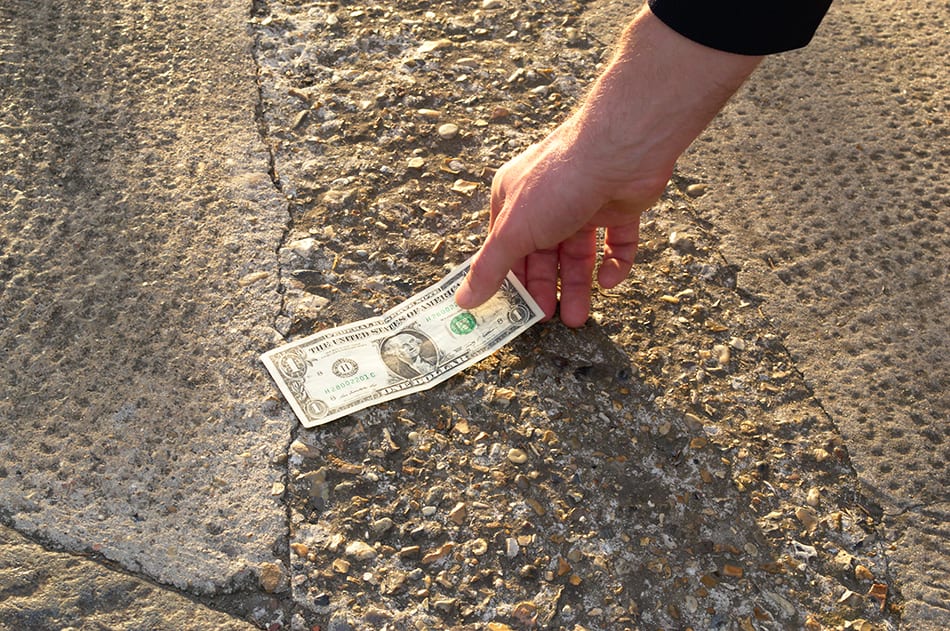 Suitcases of paper money are associated in popular culture with business transactions that are too shady to go through standard banks, such as drug deals. Dreaming of finding suitcases or other large amounts of paper money could therefore symbolize feeling like you are making money from something suspicious.

If you regularly received smaller amounts of paper money as a gift from grandparents or other relatives when you were growing up, a dream of paper money could symbolize that these relatives are looking out for you, whether or not they are still alive on Earth.

As with coins, the number of the bill can be significant symbolically. Ibn Seerïn’s Dictionary of Dreams According to Islamic Inner Traditions says of the Islamic meaning of seeing paper money in a dream, “A banknote carrying the denomination five, represents the five time daily prayers in Islam.”

Dream of finding money and returning it 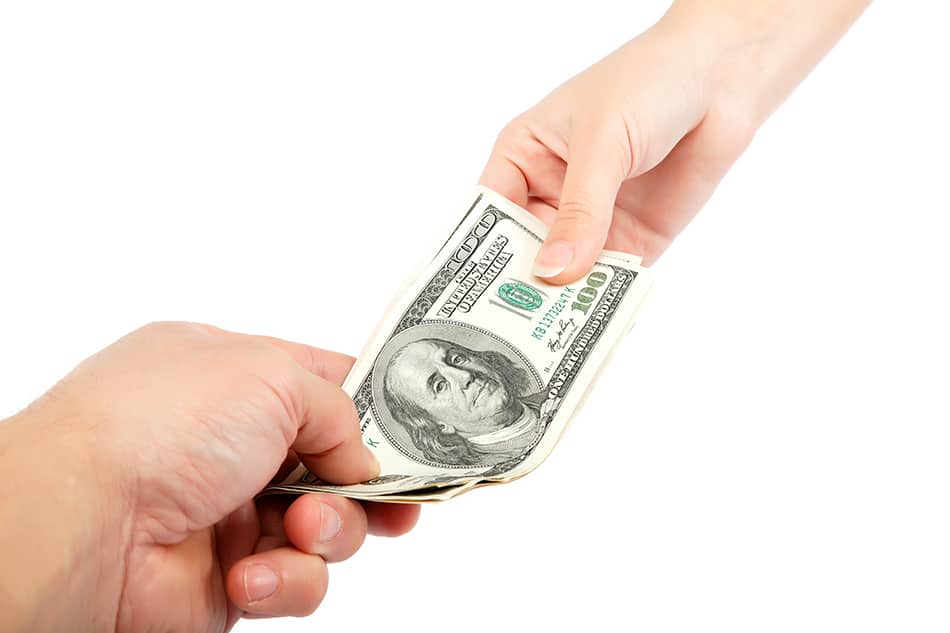 If you dream of finding money that you know belongs to someone else and making an effort to return it to its rightful owner, this could symbolize a situation where you are determined to do the right thing even if it comes at a personal cost to you. You are concerned with defining and following ethical principles.

More broadly, this dream could symbolize the idea that what people put out into the world comes back to them in some way, even if the connection is not always immediate. It might therefore be a warning for you to be aware of what you are doing, as it will come back to you, whether you like it or not.

This dream could also symbolize that you will be rewarded for good things you have done in the past.

Dream of finding money in an envelope 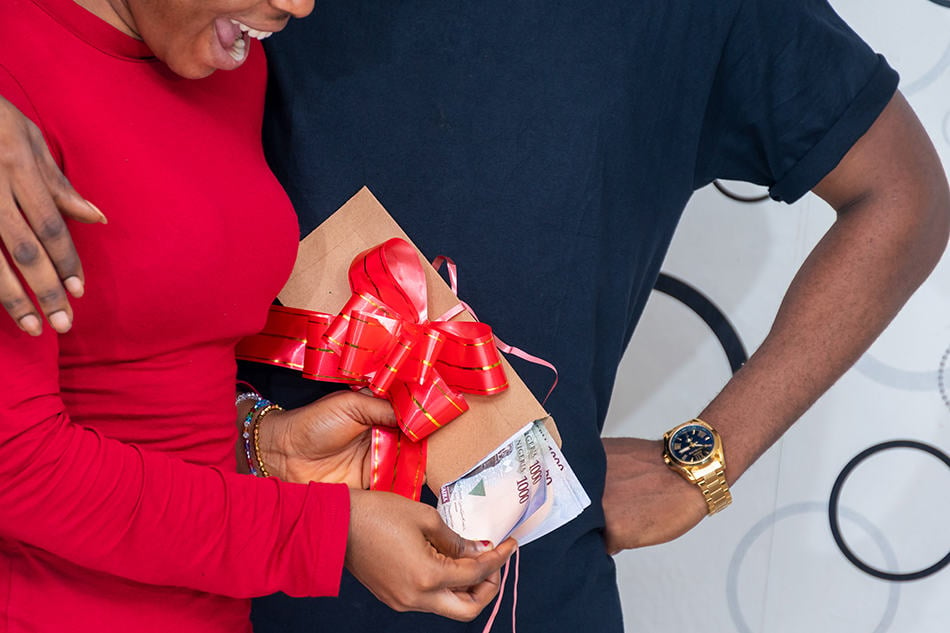 Dreaming of finding money in an envelope suggests that there is an intentional and organized effort going on in your favor, as money generally does not insert itself into an envelope by accident.

Google Arts & Culture reports that it is a common practice in China to give red envelopes filled with money to family and others for the Lunar New Year, signifying wishes for good luck and prosperity. Dreaming of finding a red envelope of money could therefore be an especially good omen.

In most cases, dreaming of finding money should be something you find comforting both within the dream and as you reflect on the dream later in your waking life. Some people have discomfort about money in general, however, because money tends to accumulate value judgments.

Without all the value judgments, money is basically symbolic of energy flowing between people. There definitely can be energetic imbalances where one person hoards more than their share of money (or any other resource, physical or not), and this type of situation is why money gets a bad reputation.

If there is something negative about your dream of finding money, you might look at what energy you are putting out into the world. It is not always quite as simple, however, as the sentiment expressed by Maria in The Sound of Music: “Nothing comes from nothing, nothing ever could, so somewhere in my youth or childhood, I must have done something good.”

There is also room in the world for grace that appears undeserved. This is a challenging part about dreams of finding money because many people want to think that they have earned everything that comes to them. They even want to think that they have earned the bad things that happen in their lives because that would mean they at least have control over the situation.

A dream of finding money pushes you to accept that not having control over everything can work in your favor sometimes.