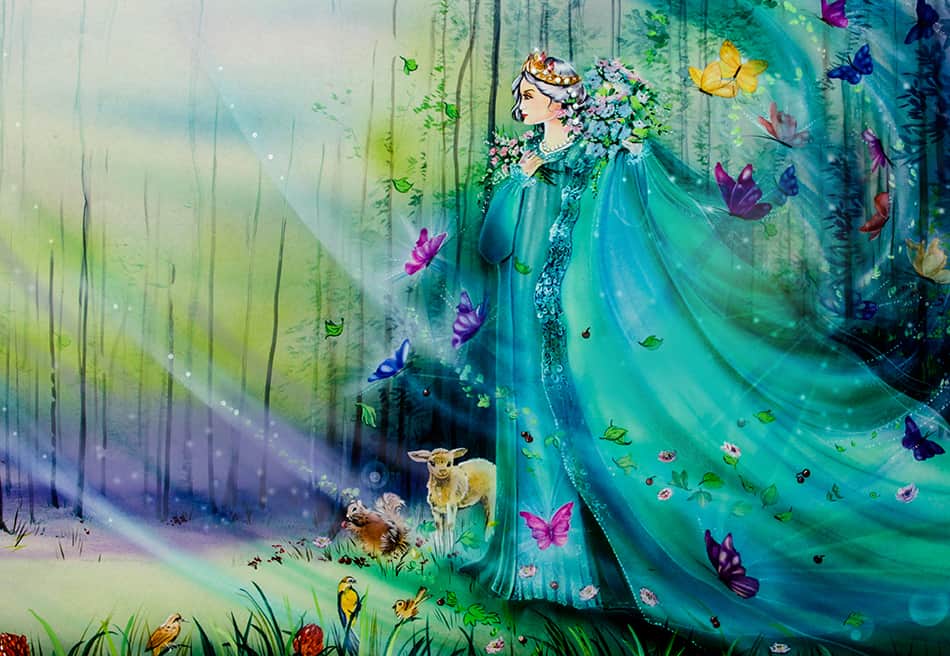 Fairies are among the most mysterious mythical creatures, and they manage to captivate the imagination of young and old alike. Throughout millenia, various powers were assigned to them across cultures. Today, fairies also remain highly present as pop culture figures.

Because of their ancient presence both in human consciousness and the Unconscious, fairies in dreams can be archetypal images, carrying important messages.

What is a fairy? 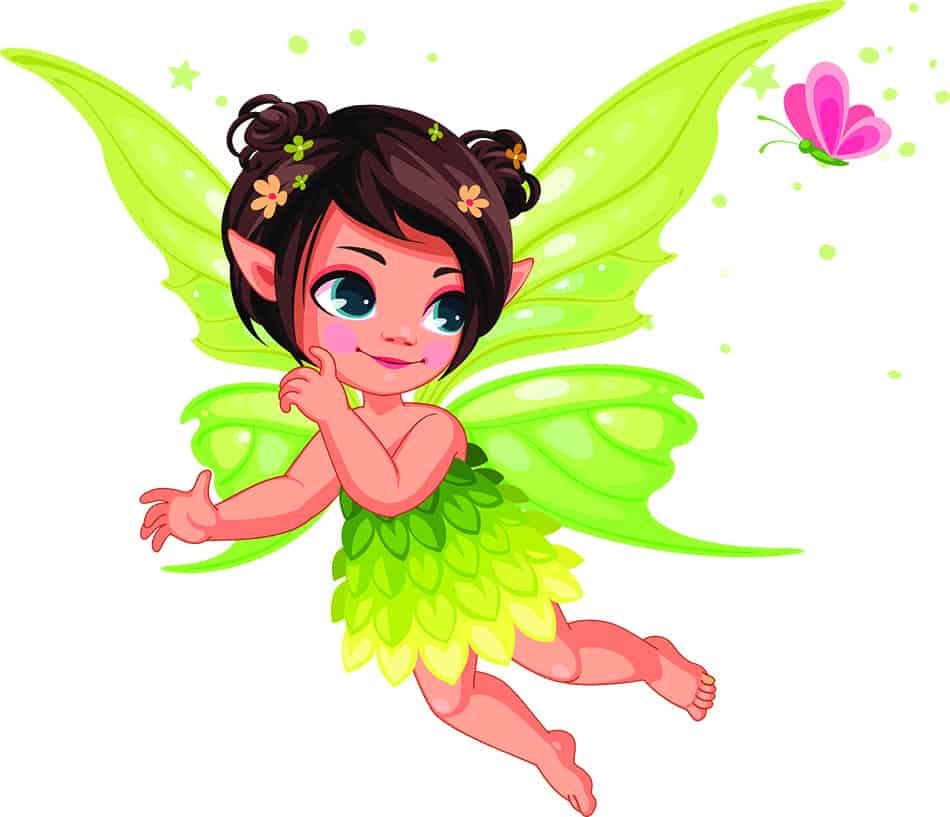 However, first of all, we should define what a fairy is. As we are mostly conditioned by popular culture, a Tinkerbell-like figure often first comes to mind when imagining one.

Still, the forms of fairies are much more diverse, and they are divided into many classes or races. For example, unlike the typical lady-like Indo-European fairies (‘Devas’), in Irish folklore, they can take the form of tiny bearded men.

However, all fairies have something in common. All have magical powers, often connected to the mystery of nature. Most have a human or a human-like form (male and female) and interact and help the natural world. Interestingly, despite the popular image of a fairy (or “fae”) being a helper, and even a servant to humans, in folklore and tradition, fairies more often than not act malevolent towards humans, playing small tricks, like hiding belongings. An angry fairy can turn its magical powers against a human who has done something wrong.

Dwarves, elves, goblins, gnomes, dwarves, and trolls can also be considered faerie races. However, in a dream context, we will focus on a more typical, feminine fairy image. The dominant fairy image in your culture also plays a role in how a fairy will appear in your dream.

What does dreaming of these mysterious creatures mean?

Dreaming of a Fairy – Meaning and Interpretation

As with many other ancient archetypal images, a dream image of a fairy has various interpretations, and the final thought will depend on your cultural background, life circumstances, and other details in the dream. 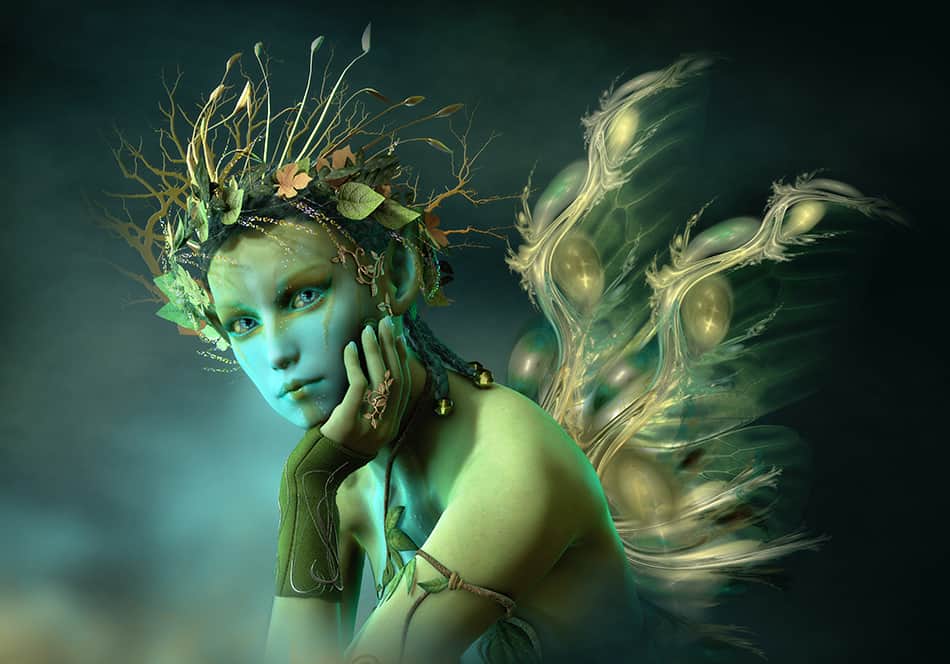 Although you will rarely encounter that perception of a fairy today, the old idea of a fairy as a malevolent spirit that can do mean things to people can linger in one’s Unconscious. Because of that, dreaming of a fairy can be seen as a messenger of trouble, passing pleasure, or trickery.

Dreaming of fairies as a sign of personal growth 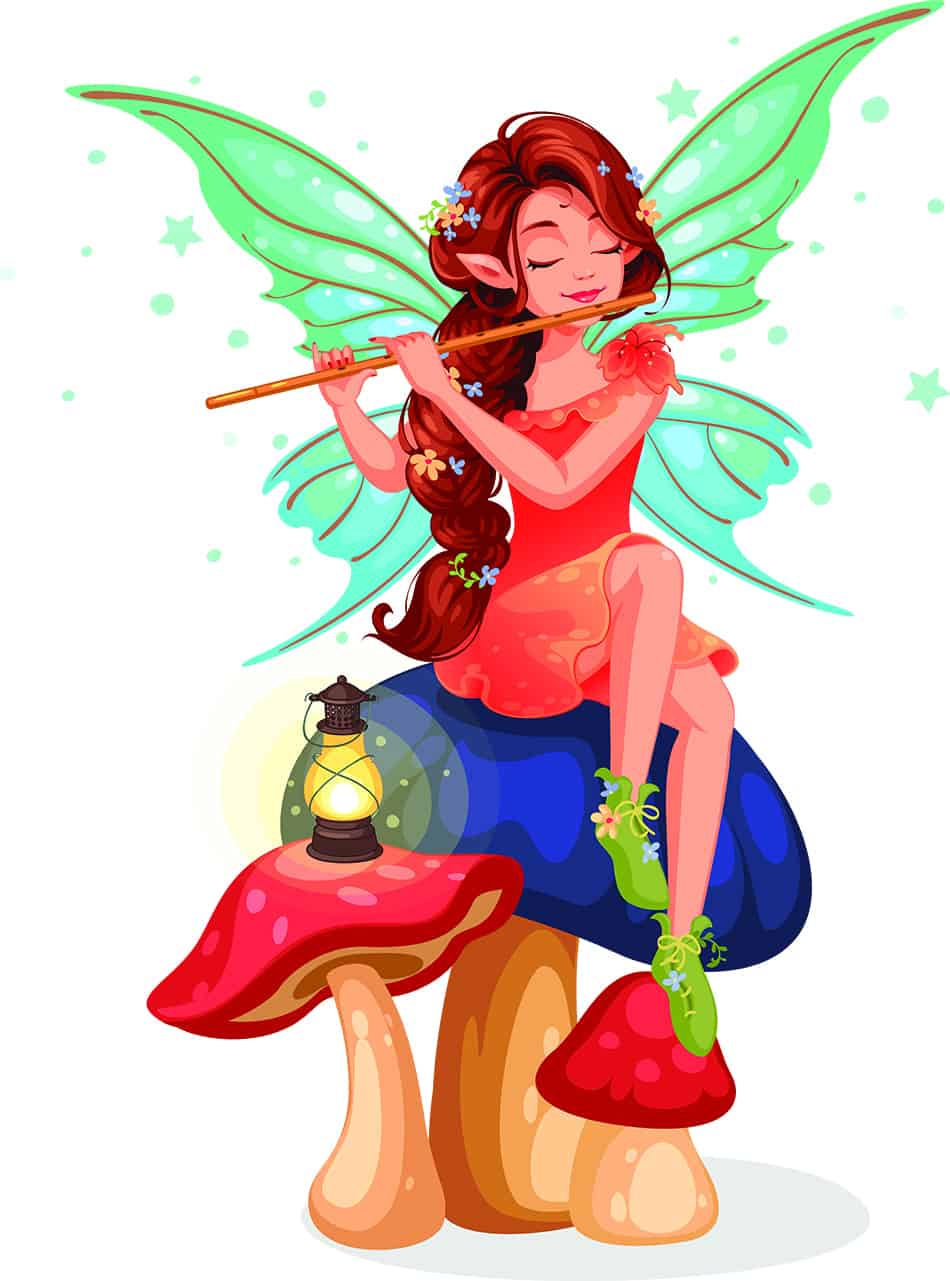 Fairies are inseparable from their magical powers. That is why they can tell you something about your own powers – maybe not outright magical, but wondrous nevertheless. Dreaming of a fairy can be a sign of your hidden potential, waiting for the moon to shine so they can reveal themselves from the darkness.

Some of these potentials are intrinsic to your gender. For women, fairies can be a symbol of the feminine and maternal, nurturing qualities. How you interact with the fairies in your dreams can tell you about the relationship with the feminine.

On the other hand, like other female archetypal figures, fairies in men’s dreams can be a representation of the anima – a female aspect of male personality. According to Jung and other analysts, our inner opposite-sex side provides us with balance. When our masculine and feminine traits are harmonious, we are at peace with ourselves and the world. The relationship with anima or animus is crucial for higher functions such as creativity. Again, the way you and the fairy interact in your dream can tell you about your relationship with your female side.

Dreaming of fairies and escapism

The fact that fairies obviously appear in fairy tales is also significant, as fairy tales offer a break from everyday living. In this context, dreaming of fairies can signal that you desire to indulge in a fantasy world, that you wish to swap the real world for the fictional one. You may live with a feeling of deprivation (material or emotional), and you’ve been secretly wishing upon a person or a force that will satisfy your needs without much effort from your tired self (the image of a charm or a magic wand).

If you have been having a tough time in your waking life, this can be a logical explanation, especially if the fairy dreams feel especially relaxing and wondrous.

Also, the figure of a fairy godmother can be a soothing presence; dreaming of a fairy godmother may be your unconscious wish for an omnipotent maternal figure to appear in your life and take away your problems with her magic wand. It is usually a sign that you feel like you’re stuck and can’t move forward. However, don’t get desperate. If you remember the last section, dream fairies stand for strength and wisdom that comes from within. That “magical power” you don’t even know you have can help resolve your issues and make your dreams come true.

Dreaming of a tooth fairy 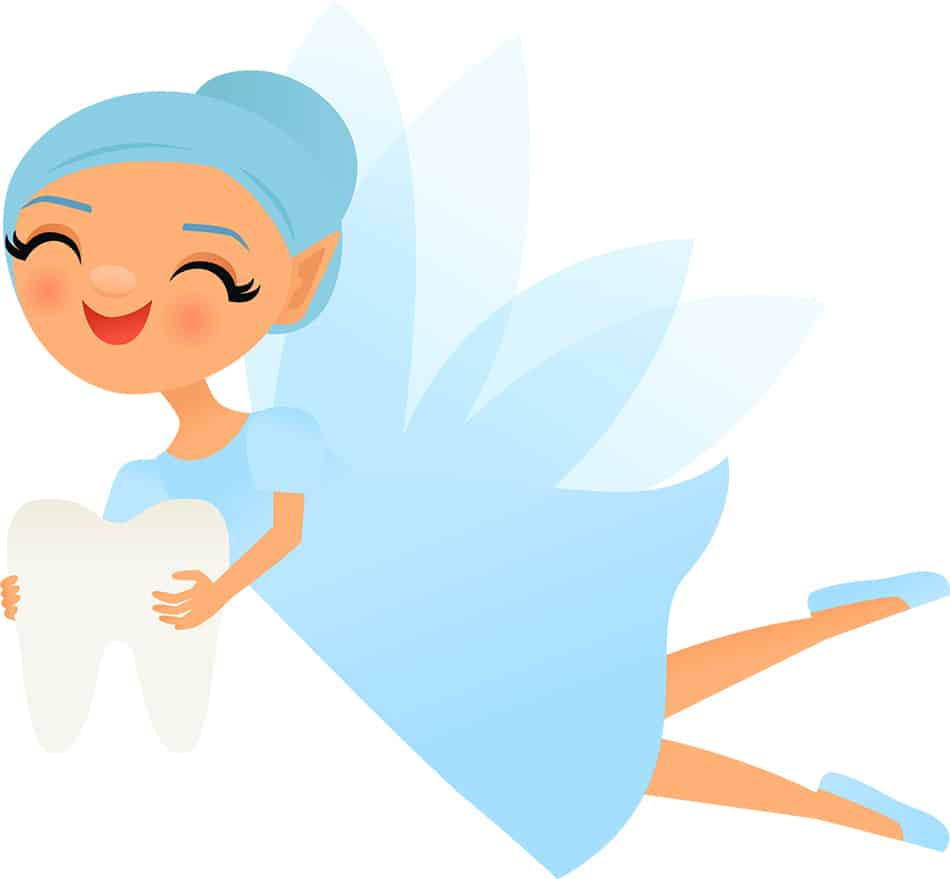 Regarding what I said above, dreaming of expecting a tooth fairy may signalize that your real-life temptation is about to pass –  but that you are hoping to be rewarded for sticking it out. To have a tooth fairy actually reward you can be a premonitory dream telling you that your expectations may be fulfilled.

An angel or a fairy godmother/godfather?

In some cases, you may not be sure if the fantastical winged creature you’ve just dreamed about was a fairy or an angel. In fact, it may not matter as much – because they may carry the same message. Both fairies and angels can act as messengers from a “higher dimension” – the higher dimension of your own being, a higher self-image – who are there to empower you.

Interpreters like Theresa Cheung point out other interesting symbolism of fairies based on psychoanalytic theories. Freudian psychologists and interpreters proposed a different kind of swindling related to fairy dreams. They believe that dreaming of a fairy can be a sign of incestuous feelings, fantasies, or intentions towards a female relative.

Personally, I think that this idea may be a bit far-fetched, unrefined, and not very applicable to most people, but it can perhaps be considered in some contexts. Still, I would shy away from interpreting a fairy dream this way outside of the context of psychoanalysis.

Fairy as a symbol of nature 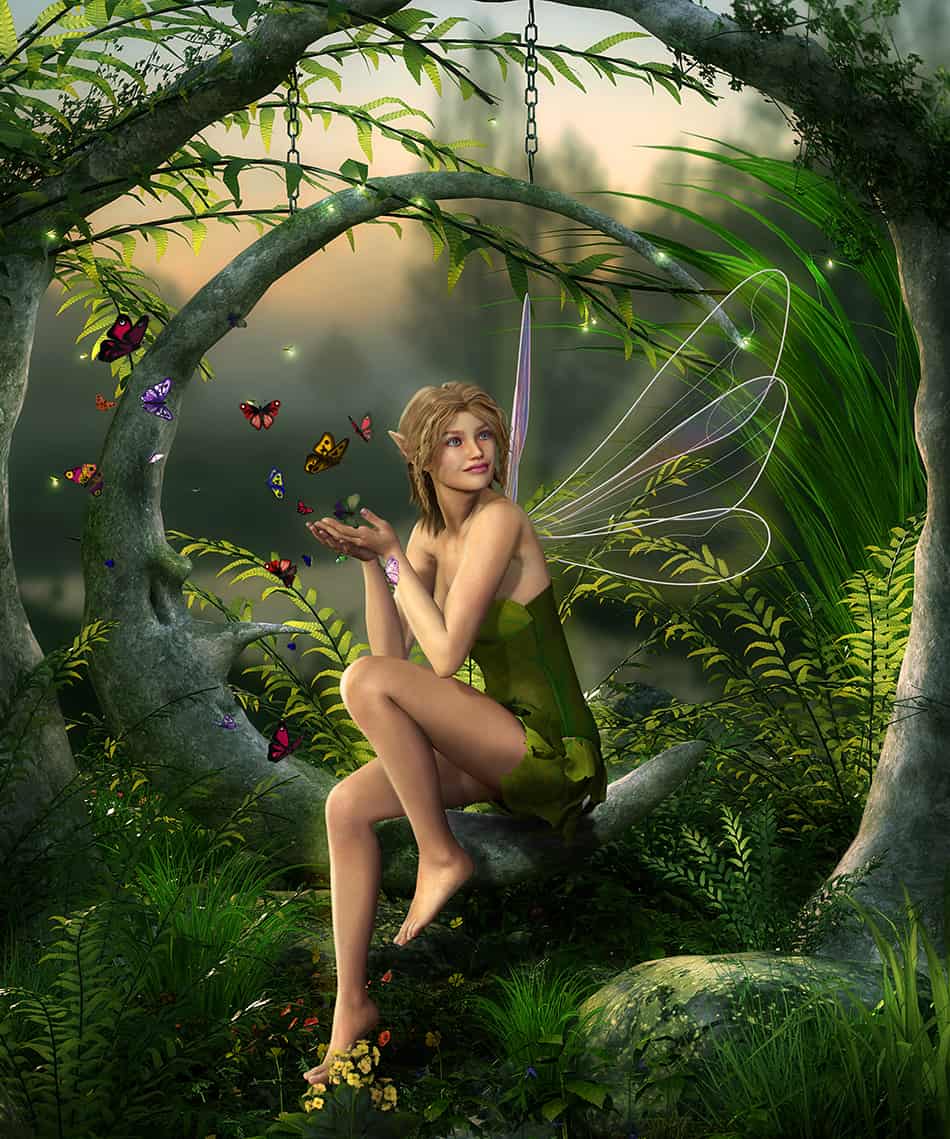 One original interpretation I would like to propose is connected to the state of the natural world. We live in an era called Anthropocene, where human influence on the planet is so vast that it overrides natural processes and becomes a dominant force. In these circumstances, nature is exposed to exploitation and destruction as never seen before.

In these circumstances, you can be on either side of the fence – to strive to be a protector of nature or a person that acts predatory towards it, only taking without ever giving back.

For the first group mentioned above, the fairy can appear in dreams as support. Perhaps you are a climate activist, or your work relates to protecting forests and nature. In this context, the dream fairies may be using their magical powers to give you the strength to perform your duties, carry on your battle, and live up to your own expectations. They could be showing you that there are hidden strengths within you. Maybe you should tap into them.

For the latter group of people, a fairy can be a warning not to mess with nature, as its forces will eventually prevail over anyone. This dream can be especially foreboding for investors and leaders on projects that are directly destructive to our environment.

In a consumer society, we are all in a sense destroyers of nature – the way most of us get our food and energy causes peril in the natural world. In this context, dreaming of a fairy, especially in the natural surroundings, can be a wake-up call. The context can add to the sense of urgency – for example dreaming of a dead fairy can be particularly sobering for the dreamer.

The dream fairies may be calling on you to embrace a more natural lifestyle or reconsider your choices in a more sustainable light. In any case, nature is calling.

Despite their modern pop-culture image being somewhat stripped down and simplified, fairies still have their full mystical power in our Unconscious – including the dream realm.

Fairies have been a part of ancient myths and folklore for such a long time that a few decades of cartoons and modern stories can’t obliterate fairies’ true, complex nature. And it is precisely that authentic fairy nature that can appear in your dreams, taking various forms and meanings, depending on the context and the atmosphere of the dream.

In that sense, fairies may symbolize the awakening or the search for your inner “magical self”, of reaching out beyond your boundaries, of emerging creativity. Dreaming of a fairy godmother can also signify that you crave protection and support while faced with the dull, harsh outer world. However, fairy dream images can also stand for trickery, mischievousness, and trouble related to earthly, passing pleasures.

Last but not least, fairies belong in true nature – forests and meadows – rather than some imaginary glittery world. That is why fairies in your dreams could be calling you to reconsider and change your relationship to our Mother Earth and its inhabitants. Considering the state of our planet, probably all of us need a fairy godmother to visit us in our dreams and teach us a few lessons. But even if she does, we need to be open enough to receive the message.

Did you ever have an interesting dream that included fairies? Let us know in the comments if you have, and we can discuss it together.