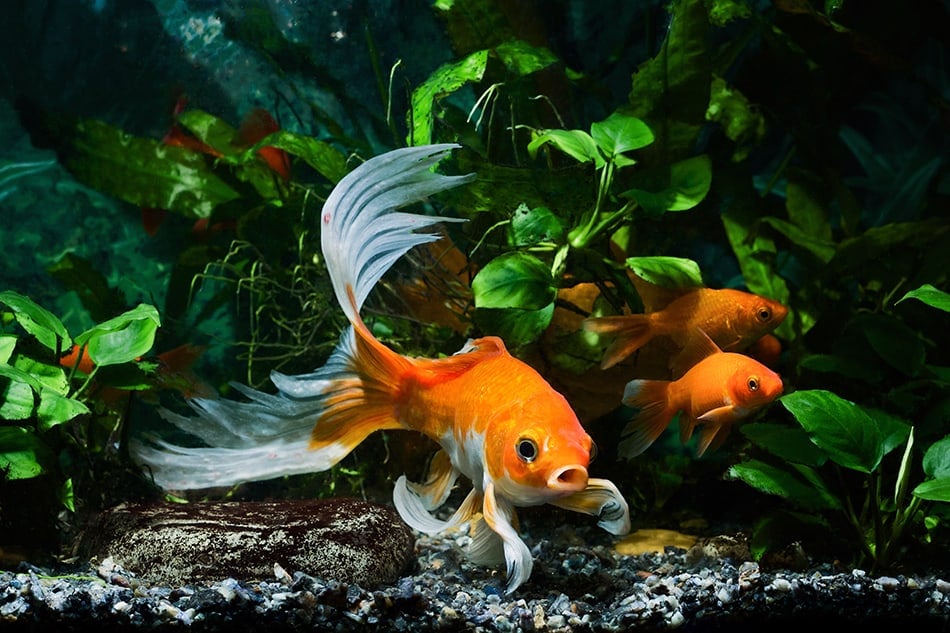 Watching goldfish can be calming. Taking care of them can be harder than it looks.

Either way, goldfish are known for their role as the pets of humans, and the symbolism of your goldfish dream likely reflects that.

Goldfish dreams can reference the larger symbolism of fish dreams, which includes spirituality and good luck. What sets goldfish apart from other fish, however, is their popularity as pets for humans. This began in China over 1,000 years ago, according to The Goldfish Tank.

The symbolism unique to goldfish therefore focuses on issues of dependency. Any pet is dependent on its owner, but this dynamic is more pronounced for goldfish than it is for other pets like cats and dogs, as a goldfish is stuck in a tank of water and can’t get out to forage for food if necessary. 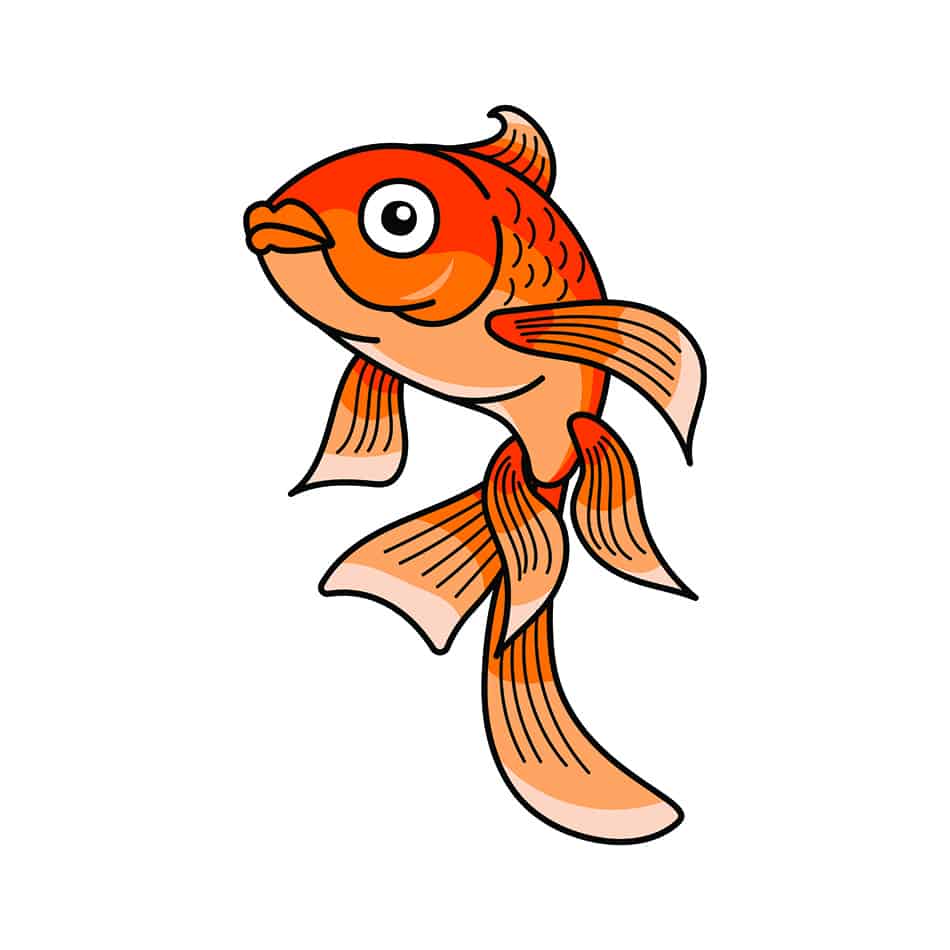 Goldfish are commonly kept as pets. When a human has a goldfish in a tank, the goldfish is totally dependent on the human for food and clean water. While other pets like cats and dogs may be able to roam around the house and get themselves snacks, the goldfish has to stay in the tank.

Dreaming of goldfish could therefore symbolize a situation where one person is dependent on another. Whatever side of the dynamic you are on, it is common for resentment to develop.

If you feel like you are the one in the tank yourself being taken care of by someone else, you may appreciate the comfort at times, but you might also resent your dependence on the other person. If you are the one taking care of someone else, you may feel proud of your ability to do so, as you look powerful and competent, but you might also resent the other person’s dependence on you.

Goldfish are common first pets for children as their care is perceived to be easy, though the reality may be more complex as noted at Babyology. Also, a common children’s snack is cheese crackers that are shaped like goldfish.

Dreaming of goldfish can therefore bring up memories of childhood. A goldfish dream could also symbolize that you or someone else in your life is approaching a current situation with the type of innocence associated with childhood.

Dream about a goldfish in a plastic bag 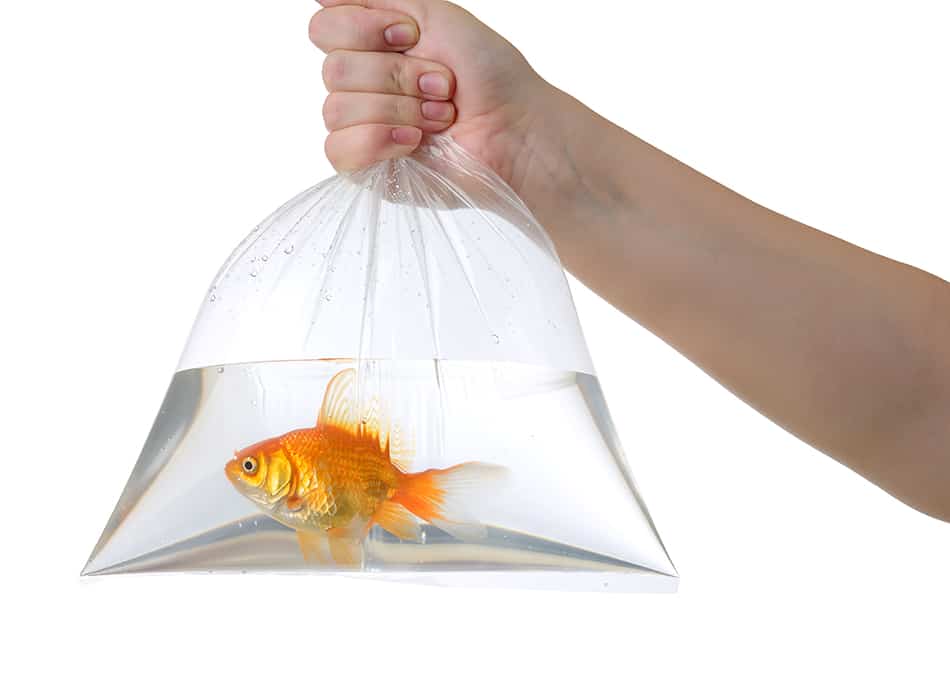 Goldfish are often transported home from the pet store in a plastic bag full of water, according to Tankarium. Dreaming of a goldfish in a plastic bag could symbolize that there is something temporary about your current situation in life. You may be on your way to something bigger and better, but you might be dealing with some restrictions or frustrations in the meantime.

Dream about a goldfish jumping out of water 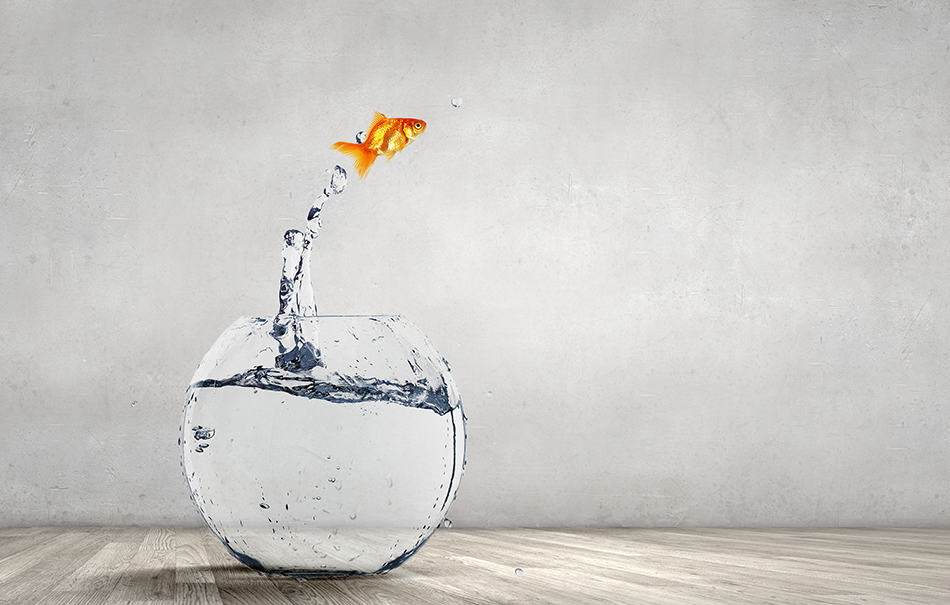 If you dream of a goldfish jumping out of water, you might consider whether there was anything that provoked the goldfish. Bustle reports that pet goldfish sometimes jump out of water that is dirty or the wrong temperature. As discussed in turtle dream symbolism, turtles can do the same thing.

Water is typically where a goldfish should be, so this dream could symbolize that you don’t feel safe in a place where you would expect to feel safe, like in your home.

Dreaming of goldfish out of water is probably not a good omen, as fish die when they are out of water. This could be like a situation where you drive off a cliff to get away from someone who is chasing you – you have no good options, but choosing to jump at least puts you in control of your fate.

Dream about a goldfish in dirty water 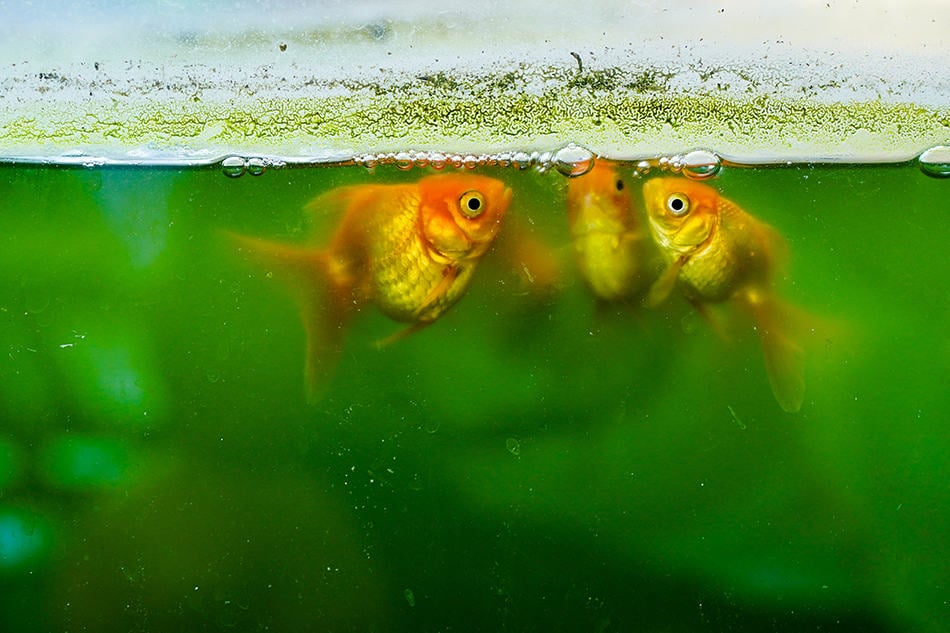 If you dream of a goldfish in dirty water, this could symbolize that you are not taking care of yourself or others who depend on you. You can’t just clean once and be done with it for the rest of your life – you need to find a way to build a routine for maintenance.

If you see yourself more as the goldfish than as the caretaker, this could represent a situation where someone else has let you down and failed in their responsibilities toward you. An example could be the landlord of your apartment neglecting to make necessary repairs.

Dream about a cat eating a goldfish 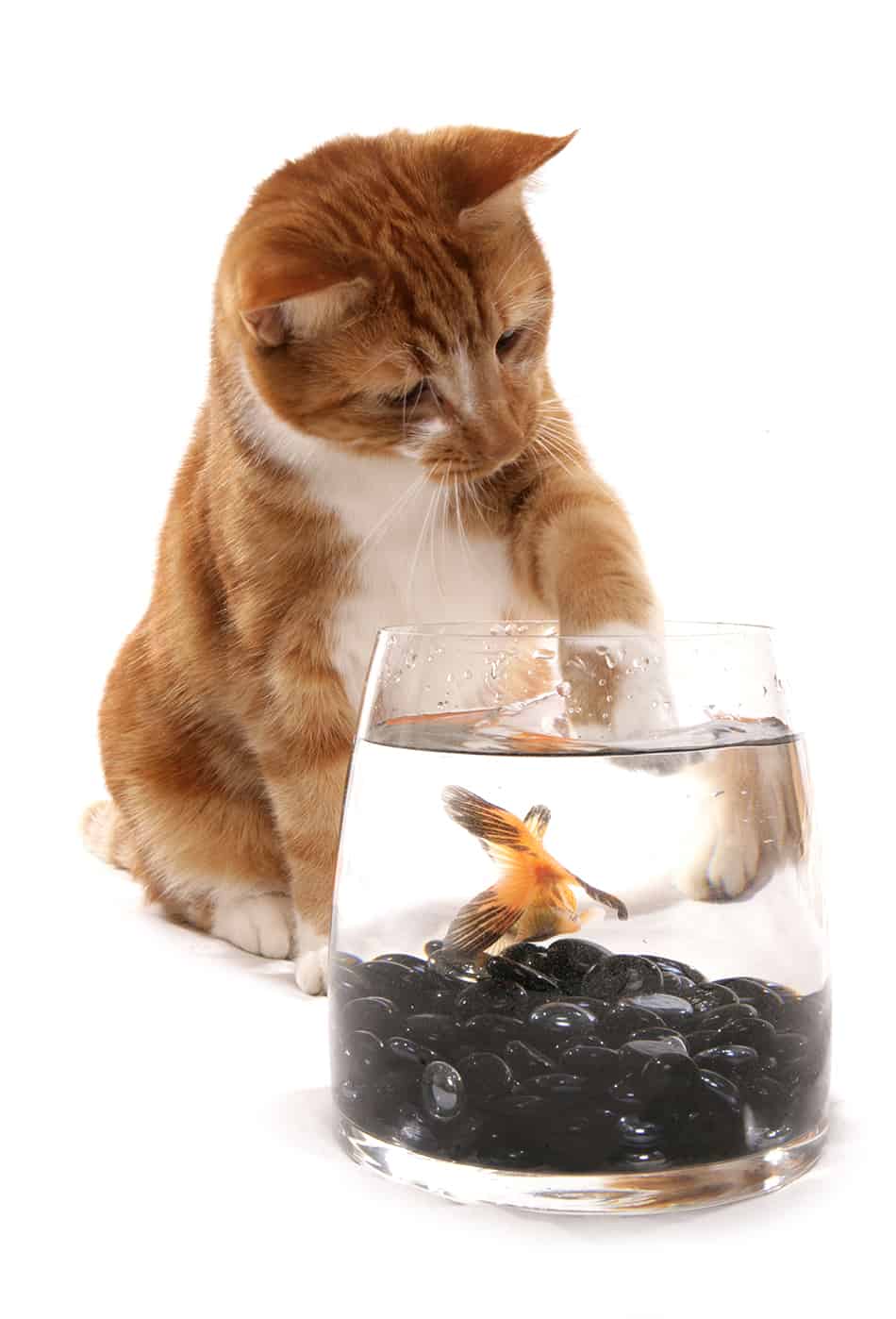 A goldfish swimming in its tank can set off a cat’s hunting instinct, as reported at Petset.com. Even though this is not really healthy for the cat, a cat may indeed eat a goldfish.

Dreaming about a cat eating a goldfish could symbolize that you are in a situation where the cruelty of nature is apparent. It may be obvious that one party is physically stronger than the other, and there is not much that the weaker party can do about it.

If you identify more with the cat, this could symbolize that you are taking advantage of people who can’t defend themselves, similar to the saying “shooting fish in a barrel.” Even if you are able to easily get something you want, you may need to think about whether that is really the right thing to do.

Dream about finding a goldfish dead 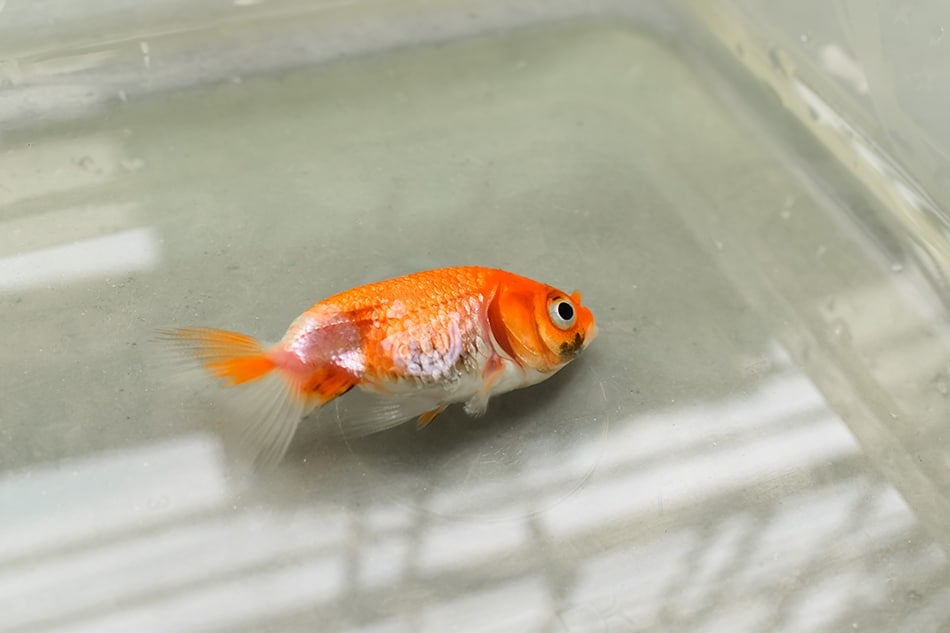 The death of a pet is the first experience that many people have with death. Sometimes it comes in the form of finding a goldfish floating dead at the top of its tank.

Dreaming of finding a goldfish dead can symbolize that you feel like you failed to take care of something that was important, and now you can’t fix the problem. Your feelings of disappointment with yourself may be more painful than the actual loss of your relationship with that particular goldfish.

Death and dying dreams in general are often symbolic of smaller endings and transitions in your life. As goldfish are often kept at home, dreaming of a goldfish dying could therefore symbolize a transition brewing in your home life. If your workplace has a prominent goldfish tank, though, your dream of a dead goldfish might refer to changes there.

For example, a dream of finding your goldfish dead could reflect a situation where you are intentionally cutting back on your responsibilities at home so that you will be free to travel more. In this case, you may have some ambivalence about getting what you want, as you see that the excitement of travel comes at the cost of the comforts of home.

Dream about feeding a goldfish 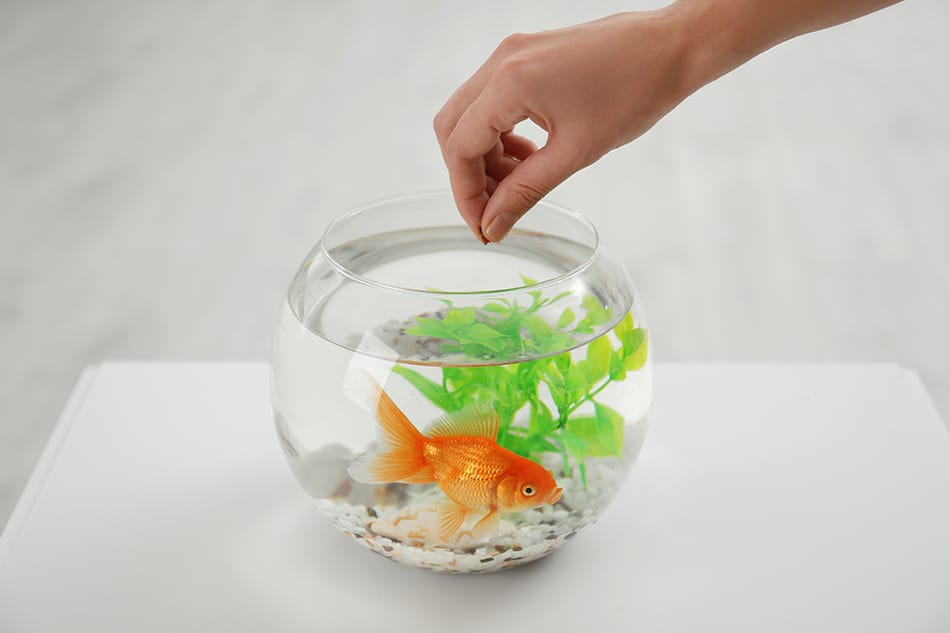 Dream of a goldfish in the wild

Pet goldfish released into the wild can become an invasive species, according to The Independent. With few natural predators, they may live much longer and grow much bigger than they do in captivity. This sometimes leads to zany media portrayals of mutant goldfish, but maybe the goldfish are just getting the chance to explore potential that they always had.

Dreaming of a goldfish in the wild could symbolize that you are leaving a familiar, protective environment for the unknown. It may be a common transition like moving out of your parents’ house to attend college, or it might be a more unique situation similar to the sitcom Unbreakable Kimmy Schmidt, where a woman leaves an apocalyptic cult’s bunker for New York City. 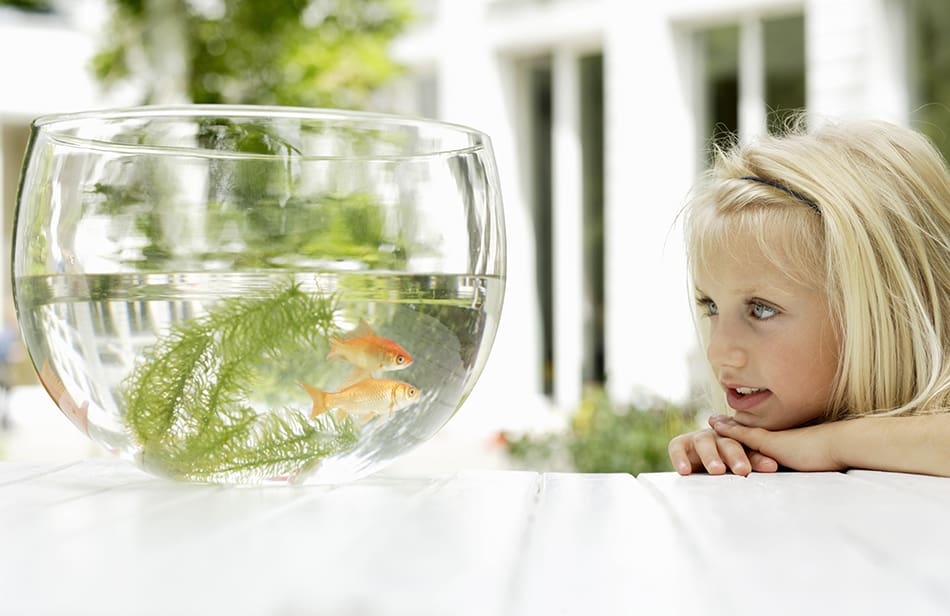 Many dentists intentionally place aquariums in their offices to lower the stress levels of their patients, according to the American Student Dental Association’s blog. Watching fish swim can indeed be calming.

If you are looking at goldfish in this way in your dream, it could symbolize that you are able to take time to relax when needed. Your peaceful mindset may help you make thoughtful decisions. 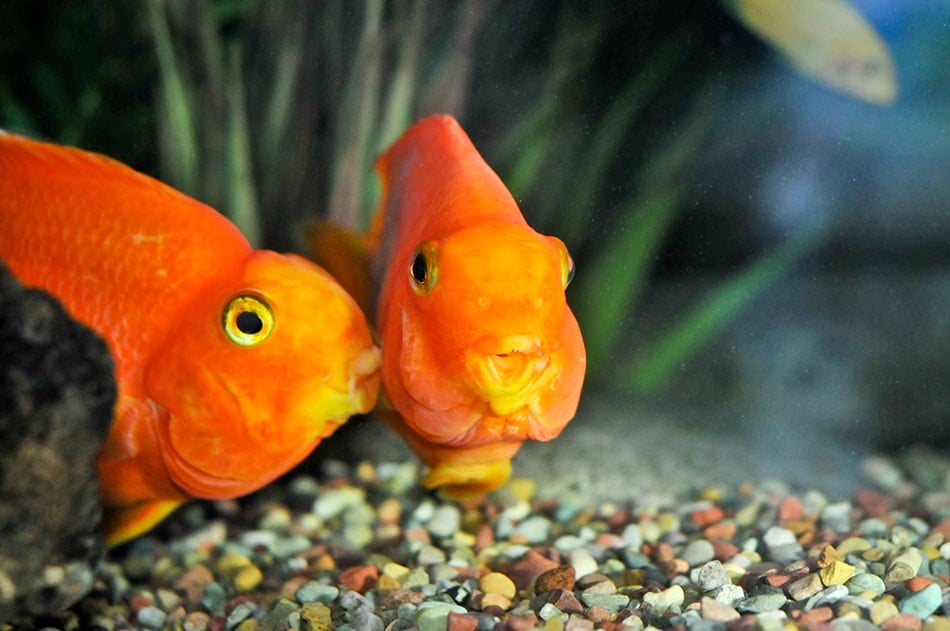 Mating in captivity is possible for goldfish, according to The Goldfish Tank. If you see this in your dream, it could symbolize that you feel like you lack privacy for your intimate life. Roommates or others you live with may seem to be aware of your every move.

Goldfish are known for their long relationship with humans. Your goldfish dream, however, may say more about your relationships with other humans.

Keeping any animal as a pet raises complex questions about dependency and freedom. These same questions often exist in the relationships that humans have with one another.