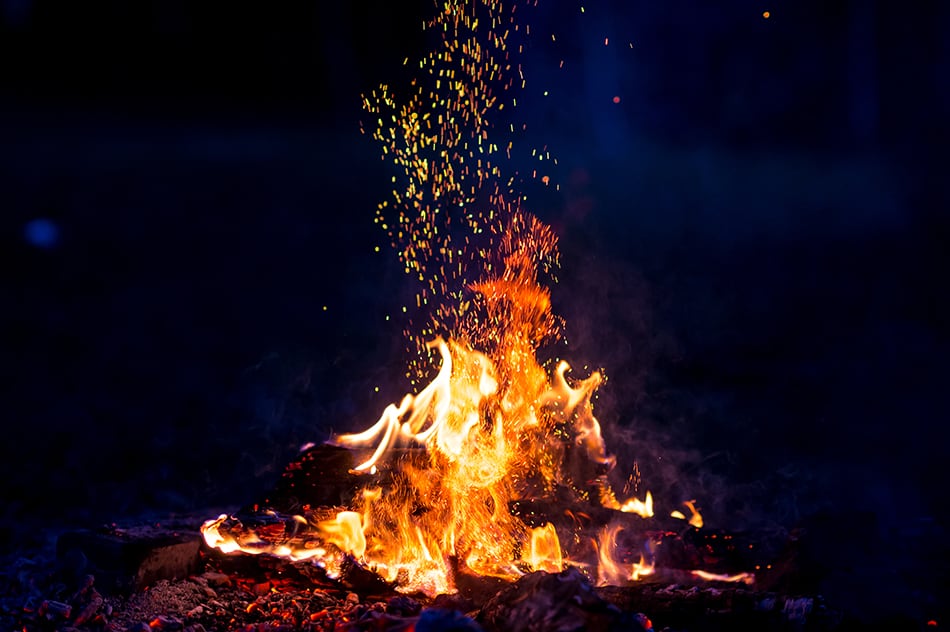 Fire is one of the oldest symbols known to mankind and holds a special significance as the element that separates us from the animals. Prometheus is said to have stolen fire from the gods before sharing it with humans out of pity. Our dominion over fire and the ability to use it for heat and light makes it a central aspect of life. However, fire’s destructive power also means that there’s always a risk of it getting out of control.

To “play with fire” is to court danger. This is because of the fickle and unpredictable nature of fire. There are two sides to fire, a dangerous aspect and a useful one. That can make dream interpretation difficult, so pay attention to the feelings and other symbols present to help you identify what role fire is taking on in your dream.

Fire, lacking subtlety, has the unmatched ability to break through the haze of a dream and really grab our attention. Therefore, if you’re dreaming about fire, it’s probably because of an acute crisis you are experiencing or perhaps one you are anticipating.

Below is a list of common fire dreams that are featured in this article. Although not every scenario can be covered, these should give you a good start toward understanding the symbolism of fire in your dreams.

What Does Fire Symbolize? 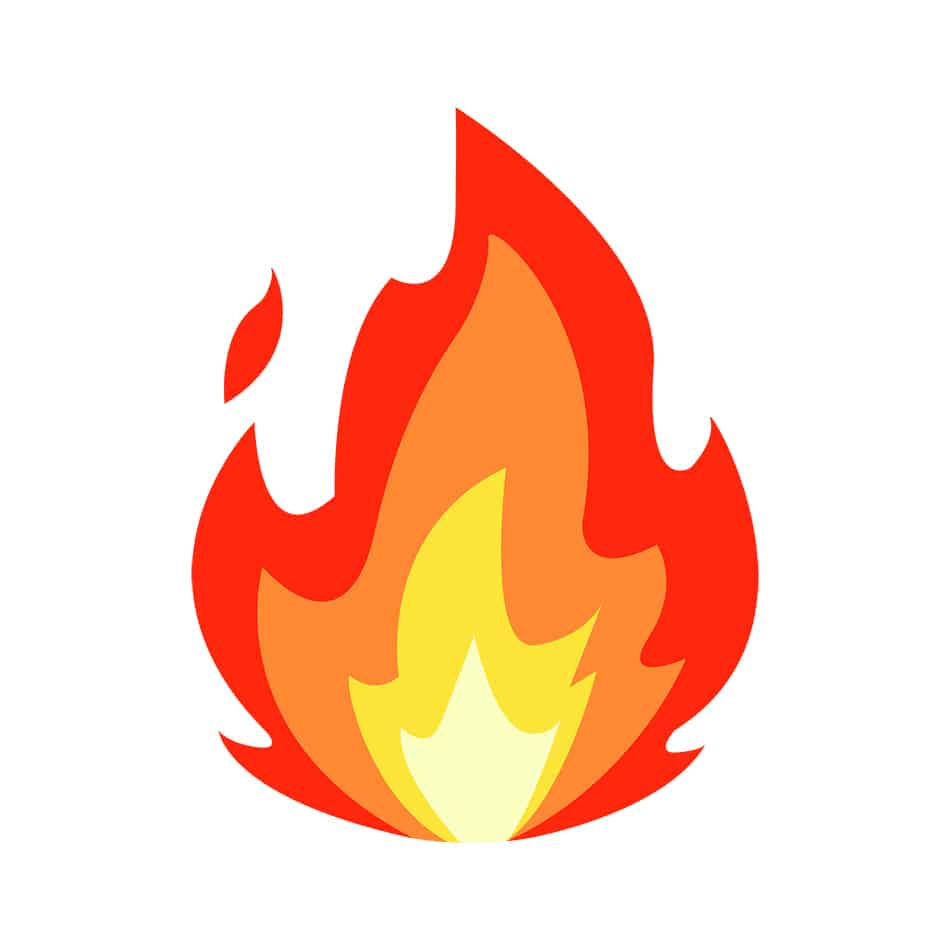 At its core, fire provides heat and energy to the world around it. Because humans have the ability to control fire, to us it therefore also represents a basic form of power. We use fire in the form of electricity to power almost everything we interact with on a daily basis. This form is dangerous but also extremely useful. When properly harnessed through insulating wires, fire is one of modern man’s best friends.

The process of combustion involves the obliteration of the fuel source, which is broken down mainly into vapors and ash. Like fire, anger and aggression can also destroy. However, passion is another aspect of the fiery symbol that doesn’t necessarily have to be destructive. Therefore, in this context, we’re looking at fire as a symbol of intensity and not just negativity, for the term passion can apply equally to a well-played piece of music as to a well-fought battle.

On the subject of our passions, these can be intellectual or physical in nature. Physical passion – that is, the act of copulation – is symbolized by the fire sign. In particular, the root, or base, chakra in the ancient system is represented by the color red and the triangle, which is the symbol for fire. Through this, we are meant to understand that fire is the spark of life. This aspect of fire represents the human soul and our connection with the divine source of all life.

One of the first things we learn about fire is that it is dangerously hot. It can burn – that is, destroy. However, as we get older, we also learn that fire serves a useful purpose, not just for cooking but in a grander sense. The forest floor after a fire is quickly seeded with new life, for instance. Certain pine trees never even drop their seeds until the cones are scorched by fire. In fact, many forms of life have evolved to take advantage of the new opportunities heralded by the destruction of the old. Therefore, we have come to see fire as a symbol of both the destructive force and the renewal that’s sure to follow.

Because of the ability of fire to destroy and open up new areas for growth, it has become a symbol for ritual purification. The parts of us that are useless are ritually burned away in the spiritual fire so that new parts can come to full expression. This type of fire is not destructive but must still be treated with respect and even reverence. That’s because the process of spiritual purification in this case is one of death and renewal. This is a sacred fire that represents the greatest mystery of all time: the circle of life itself.

For thousands of years, we humans looked up to the sky for all sources of illumination, the sun by day and the stars and moon by night. Sunlight was scarce in winter time, making it hard to work inside the warmth of the cave. However, with mastery of fire came control over our days and nights, our summers and winters. Fire lit up the insides of the caves back then just as it lights up the world 24 hours a day now.

In addition to the literal illumination provided by firelight, however, fire can also symbolize a kind of mental or spiritual enlightenment. For example, it was the human mind illuminated by reason which generated what’s known as the Enlightenment Era. This kind of internal fire, which enlightens and illuminates but does not destroy, often visits us in dreams.

Dreams about fires that destroy 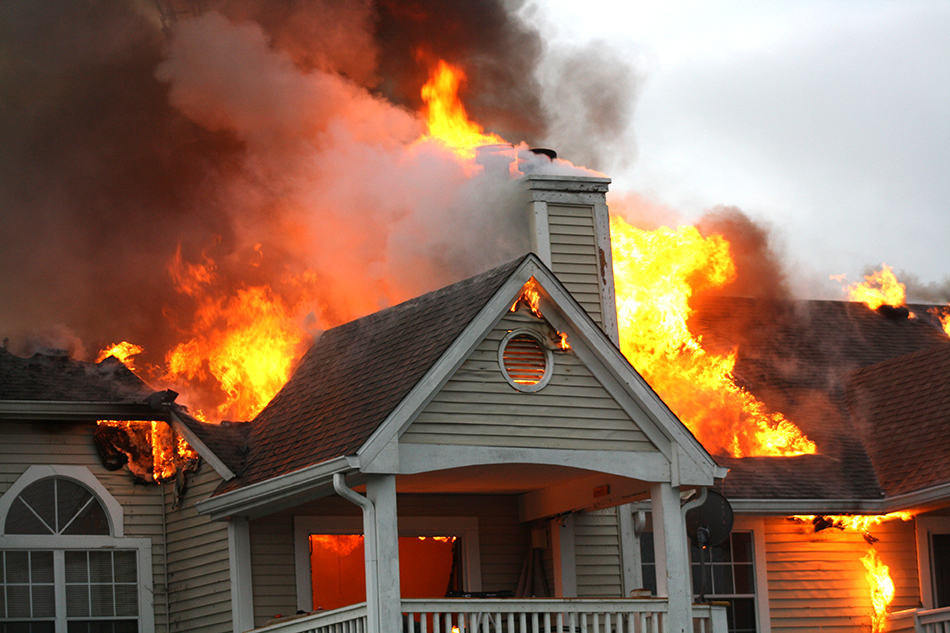 You may be dreaming about a destructive fire from two points of view: that of one who fears the fire and that of one who desires it. Your emotions should be your first clue. How did you feel about the fire, and what was it destroying? Your subconscious may be trying to let you know about strong emotions you’re only barely aware of (or feelings you could be actively suppressing). If you felt intense rage or a sense of satisfaction about the fire, you may have some deep-seated anger that is calling out for fuller expression in your conscious mind. On the other hand, if you felt afraid or were in danger, your dream may be a warning that something you love faces the threat of destruction.

Dreams about fires that do not burn 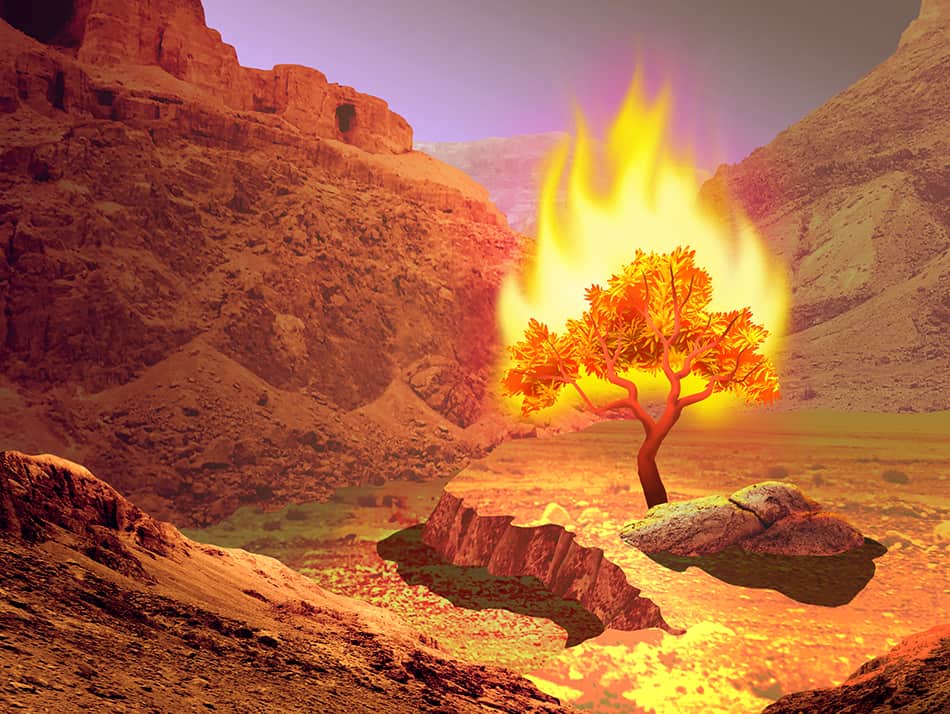 The fire that does not burn, just like the one said to have visited Moses in the form of the burning bush, is a symbol of the divine spirit that exists in each of us. The other details in the dream will help you fill in its meaning. Your subconscious mind may be aware of an awakening that is taking place now or soon will. If the fire is associated with someone else, the dream may be trying to tell you that you can trust this person, that they represent an aspect of the divine which your soul recognizes.

Dreams about a burning house or building 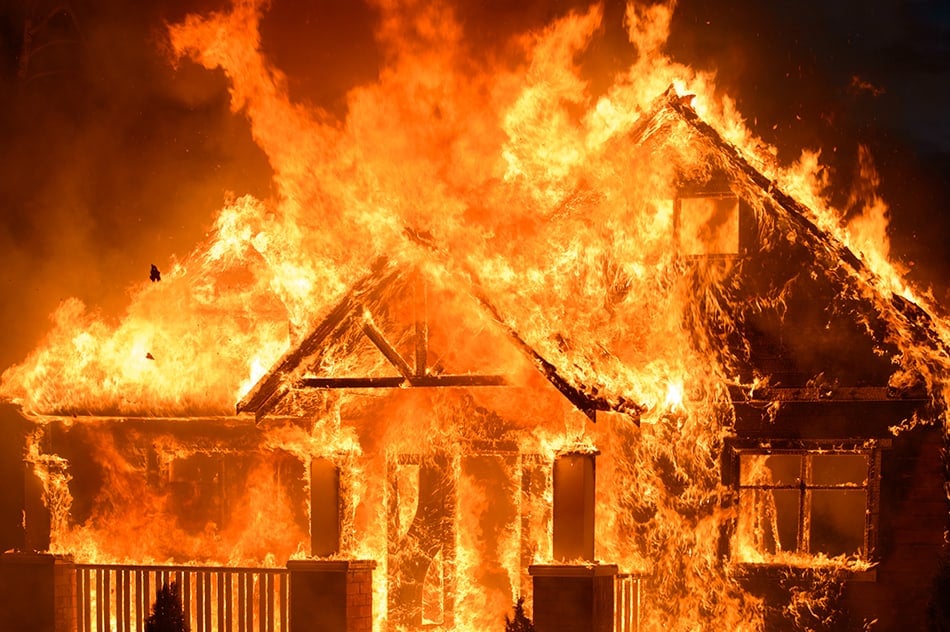 In real life, burning buildings are a sign that something has gone horribly wrong. They could be the result of an accident or a series of seemingly random events, but they often place human lives at risk and therefore represent something scary and dangerous, something that either is or could quickly become completely out of control. If you experience a burning building in your dream, consider your emotional connections to the place in question. Although this type of dream is most often associated with destructive fire, it could also be a sign of renewal or purification.

Dreams about having trouble starting a fire 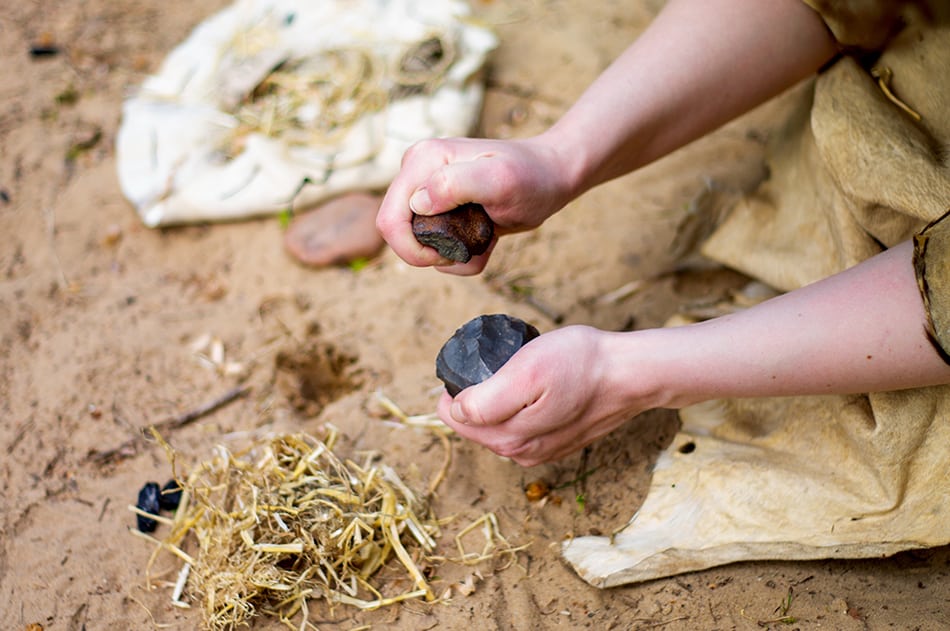 Having difficulty lighting a fire in your dream could relate to an inability to spark a different kind of fire in real life. Whether it’s a lack of creative juices or a nonexistent sex drive, something has become almost numb in your life and needs to be rekindled, so to speak. Your dream could also represent other aspects of fire, such as mental pursuits and professional ambitions, for instance. Be sure to take note of the context and details in your dream in that case to help you establish its meaning.

Dreams about being separated (from someone) by fire 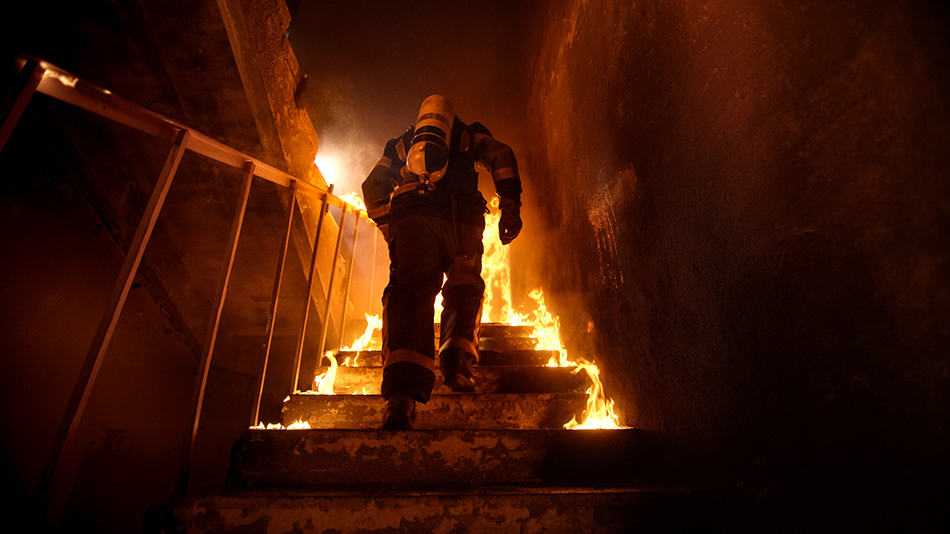 A wall of fire separates you from a loved one in a dream. Your first thought is, “Oh no! I’m about to lose this person I love so much!” That’s not necessarily what it means, though. It’s important to remember that the subconscious mind is no more likely to see future events than our conscious mind. However, sometimes it picks up on subtle vibrations that cannot be properly taken in during waking life. Therefore, this type of dream where you’re separated from a loved one by a wall of fire most likely hints at a perceived loss of connection or an impenetrable barrier between you and this person. Your subconscious is merely trying to make you aware of it so that you can deal with it in your everyday life.

Fire dreams can be intense or even scary if you aren’t sure what they mean. However, it’s important to remember that we interact with fire in various forms throughout each and every day. It’s fire that powers the steam turbines which create electricity, fire as raw energy from calories that powers our very bodies, and fire in the form of heat that keeps us warm on cold winter nights. There is no reason to be afraid of fire in a dream. Instead, look deeply to understand what it truly represents.