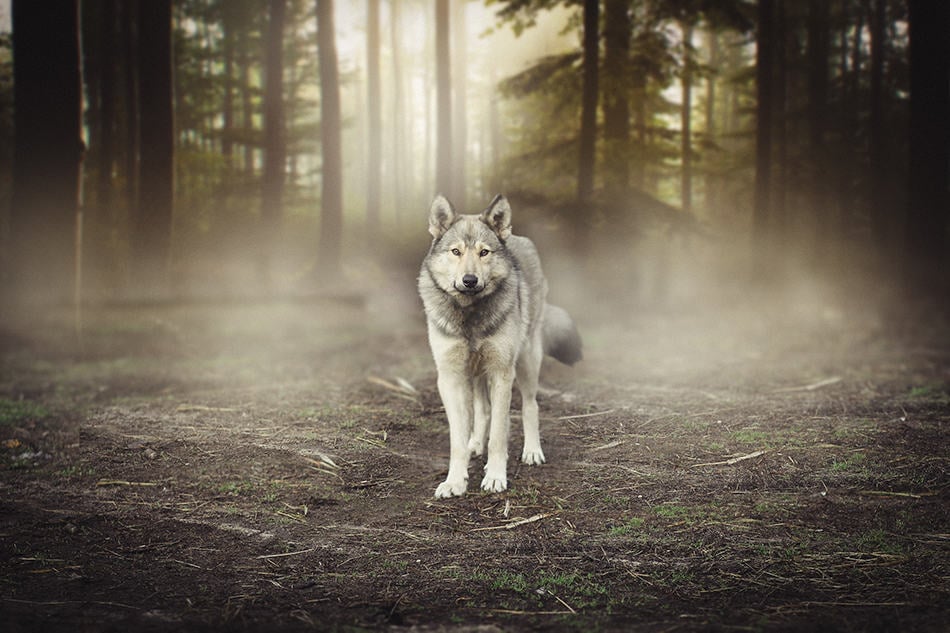 Many people have never seen a wolf, a classic predator animal, in waking life. The need to defend yourself from one threat or another never entirely goes away no matter how modern a city you live in, though.

Dreaming of a wolf may therefore show you where you are on your local food chain.

Wolves are dangerous predators to the animals they prey on. From the wolf’s perspective, though, the wolf is just doing what it needs to do to survive.

Dreaming of a wolf can therefore symbolize complex dilemmas around how you and other people in your life get basic needs met without harming each other in the process. Sexual desires can be one subject of this type of conflict.

Dreaming of a wolf can also symbolize conflict around whether you should submit to the will of the pack or set out on your own as a lone wolf. 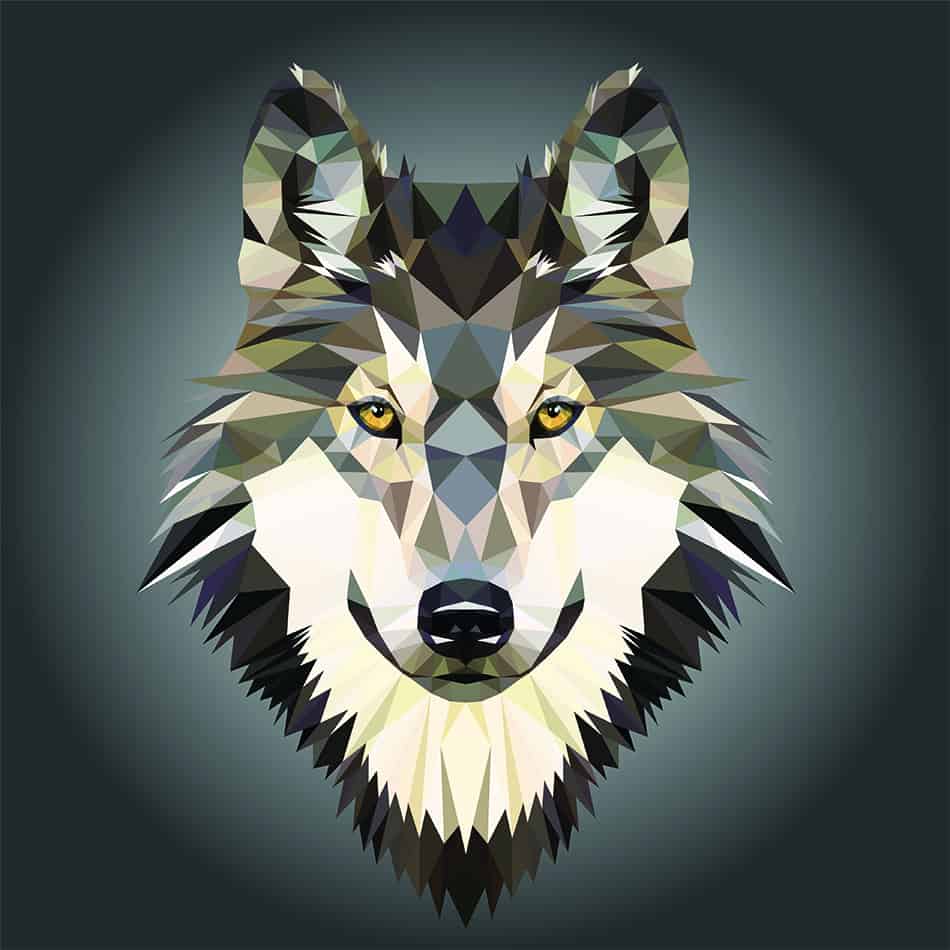 Wolves are known for their appetite. To “wolf” food is to eat quickly and hungrily, so your dream of a wolf might symbolize that you are hungry for something, whether or not that is food specifically.

If the context of the dream does point toward food specifically, dreaming of a wolf could reflect your attitude toward your eating habits. For example, you might be trying to go on a diet and resenting the restrictions, still feeling hungry for whatever favorite food you were told to stop eating.

If you have concerns that a dream of this sort might be associated with a more serious problem with food, such as anorexia, bulimia, or binge-eating disorder, please discuss those concerns with your physician.

As wolves are carnivores, the satisfaction of their appetite often comes at the expense of another creature’s life. To dream of a wolf, especially a wolf eating, can therefore symbolize a situation where you know the meeting of your needs is likely to cause someone else inconvenience or worse.

Alternately, such a dream could symbolize that someone else in your life has needs that can’t be met without harming you. The wolf can’t help being hungry and needing to eat, so what do you want the wolf to do?

For more information on moral dilemmas of this sort, see killing dream meaning.

As noted above, wolves are predator animals that must eat prey animals in order to survive. Where does killing to eat cross the line into killing for the sheer joy of it, though – and, especially if you are the one getting killed, does it really matter?

When a wolf is visibly a wolf, the prey animals at least have the opportunity to recognize what is going on and act accordingly to protect themselves. The saying “wolf in sheep’s clothing,” however, refers to situations where a predator is able to blend in and not be recognized as a predator.

As discussed further in demon dreams, the main point of the book People of the Lie: The Hope for Healing Human Evil by psychiatrist M. Scott Peck is that evil, defined as “that which opposes the life force,” can be found in normal-looking people.

Your dreams can sometimes depict things you pick up intuitively about the people in your waking life. Dreaming of a creepy wolf could therefore symbolize that someone in your life, though they may look ordinary, is giving off vibes of being up to no good.

A more awkward take on the “wolf in sheep’s clothing” theme is found in the 1966 rock song “Li’l Red Riding Hood” by Sam the Sham and the Pharaohs, where a man with sexual desire for a woman describes himself in a way referencing the wolf from the story Little Red Riding Hood. He says,

I’m gonna keep my sheep suit on
Til I’m sure that you’ve been shown
That I can be trusted, walking with you alone.

Little Red Riding Hood
I’d like to hold you if I could
But you might think I’m a big, bad wolf, so I won’t.

Seeking a sexual partner can be very difficult, regardless of anyone’s gender or sexual orientation, because desire is often not mutual. If you are interested in someone, the thought of just directly letting them know can be terrifying, because what if they react badly?

Humans can do things like this too, even though many would like to think they are beyond that. Dreaming of a pack of wolves can therefore symbolize that you are involved in a group of humans where the good of the collective routinely outweighs what is right for some of the individuals involved.

As is the case with wolves, sometimes humans may find that submitting to a hierarchy gives them more secure access to resources than they would otherwise have, even if they are not at the top of the hierarchy. If you do make such a choice, though, you are better off at least being aware that that is the choice you are making.

Trello points out that pack mentality in the workplace can lead to problems like a patient getting the wrong medication at the hospital because a nurse is afraid to report an error to a higher status nurse manager or doctor.

The term “lone wolf” comes from a wolf leaving the pack it was born into, according to HowStuffWorks. This often happens when a young wolf reaches sexual maturity or when a wolf is the target of aggression from other wolves in the pack.

Awkward in-between times like this can happen in the social lives of humans too, so dreaming of a lone wolf can therefore symbolize that you are going through such a period. The time alone can be useful for you to clarify who you are and what you are looking for before you make your next big commitment.

Dreaming of a lone wolf can also symbolize a situation where you feel the options are all or nothing, with no middle ground – you are forced to choose either the complete absorption of a wolf pack or the complete solitude of a lone wolf. You might want something more balanced than either extreme, but you might have trouble setting reasonable boundaries with others involved.

Dream of a wolf howling at the moon

HowStuffWorks goes on to say that wolves use those nocturnal howls to communicate practical information to each other, like asking the pack to meet up and warning others to stay out.

To take such a dream more literally, it might be a warning to be careful what you wish for, as wolf packs can be just as regimented and repressive as any human society. Such a dream might therefore also symbolize a situation where the grass looks greener on the other side, where you have idealized some way of life different from your own without taking into account that it might also have its share of problems.

Dream of a wolf attacking you 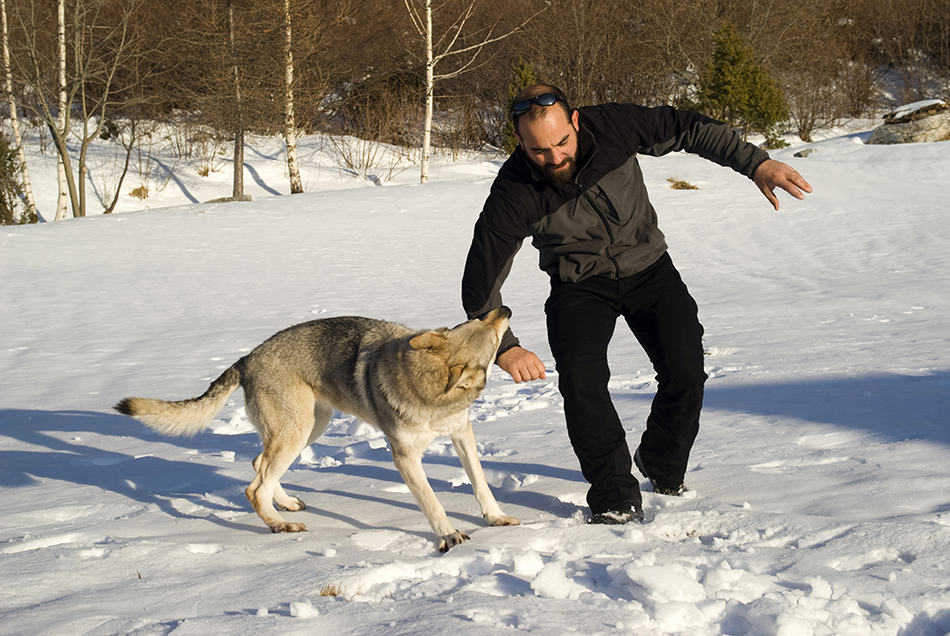 If you dream of a wolf attacking you, there are a couple of different possibilities for interpretation.

The more obvious possibility would be that you feel like someone else in your life is out to get you in a predatory way. This variant is usually obvious enough that you at least have an idea of who the wolf represents, and it is probably someone dumb enough to get caught being a wolf.

Alternately, if you have been suppressing your own needs to keep the peace in some situation, the wolf attacking you may represent your own suppressed needs that are about to finally erupt and demand to be addressed.

If that happens, of course, the title of Big Bad Wolf will be awarded to you and not to whoever put you in that situation of having to continually suppress your own needs to keep the peace. That is not fair, but it is typically how these things are handled.

Psychology Today has reported on the phenomenon of two different types of narcissists – overt and covert. While overt narcissists loudly demand their own way, covert narcissists, for whom the term “wolf in sheep’s clothing” might be appropriate, quietly manipulate those around them into submitting to their will.

Dream of killing a wolf 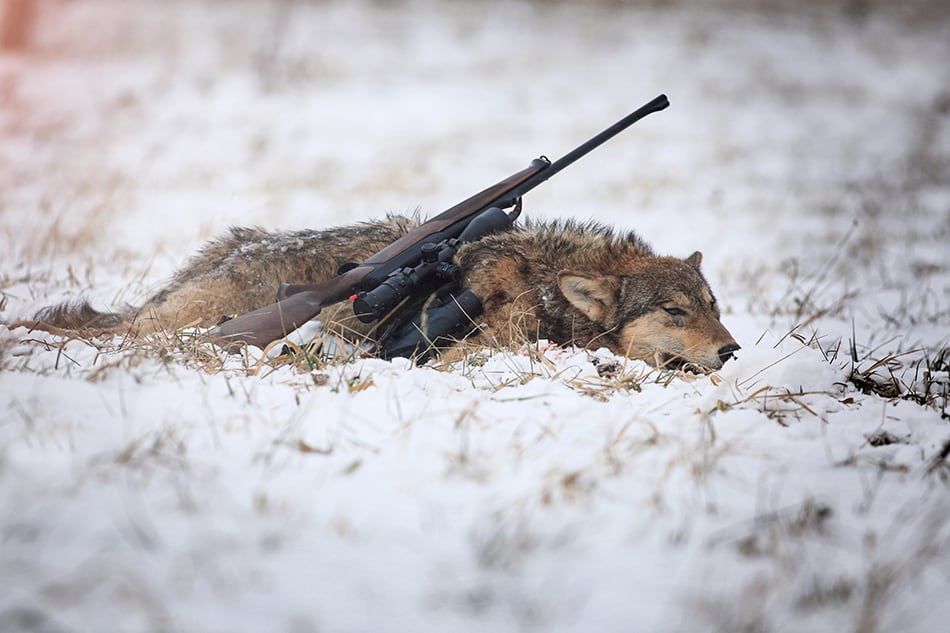 If you dream of killing a wolf, it might be relevant to the interpretation whether you killed the wolf in self-defense.

The classic story The Three Little Pigs ends in three pigs killing a wolf who had been menacing them and threatening to eat them.

In the 1933 Walt Disney short film version, “Three Little Pigs,” the wolf is merely injured rather than killed. This movie is known for the catchy tune, “Who’s Afraid of the Big Bad Wolf?”

True Classics notes that the song “became the unofficial anthem of the Great Depression, a way for people to thumb their noses at the dire state of the economy.” Over the next few years, the song then came to refer to the enemies of the United States in World War II.

Whether the wolf symbolizes a wolf or an economic depression or a war, the pigs have the right to be proud of having defended themselves from attack, and your dream of killing or injuring a wolf in self-defense could symbolize a similar triumph in your own life. Even the necessary kind of killing might have difficult emotions associated with it, but you did what you needed to do to stay alive.

It may be necessary, however, to look at how threatened you really are by the wolf. Is it possible that you are overreacting to some provocation and seeing it as a bigger threat than it is?

Rosina Lippi points out that the Walt Disney short film used anti-Semitic stereotypes in its depiction of the wolf. Your dream could potentially symbolize a similar situation where prejudice has caused you or others to see a threat where there is not one in reality.

A wolf is a powerful creature at the top of the food chain. Dreaming of a wolf, however, can show where you are vulnerable.

Either way, a dream of a wolf can point to an uncomfortable conflict where there is not a solution that works well for everyone involved.