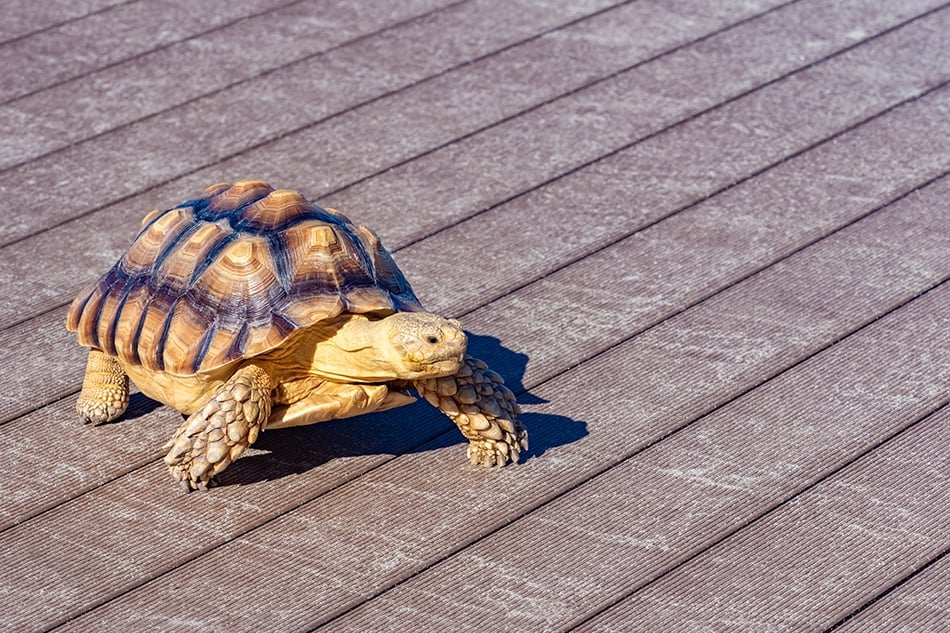 Turtles are animals with a few striking qualities. They have big shells on their backs, and they move very slowly.

These quirks of turtles are well known in human cultures around the world. This makes turtles rich in dream symbolism.

Dreaming of a turtle symbolizes a practical, persistent approach to life. While the concern for safety can at times become excessive to the point that nothing gets done efficiently, this approach in moderation can lead to a long, healthy life.

If the turtle’s shell is emphasized in your dream, this can symbolize dilemmas related to having to choose between being vulnerable and being protected. It can also symbolize great strength. 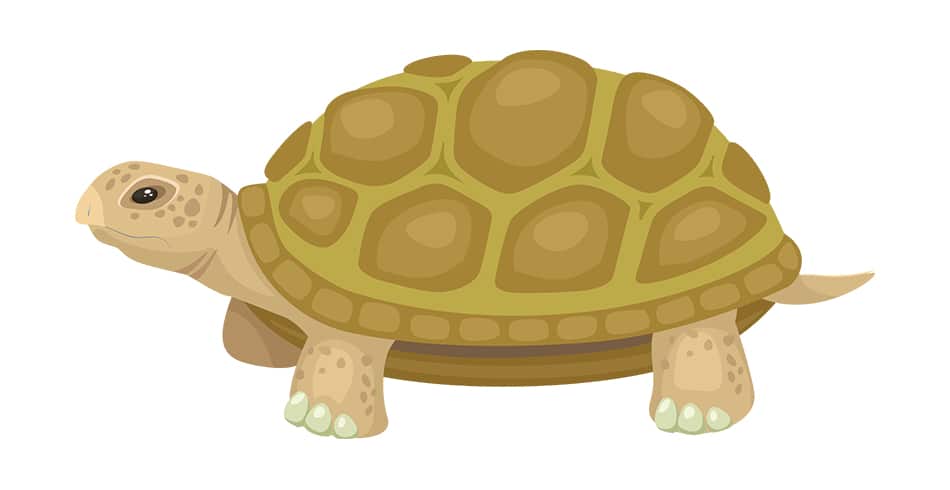 Turtles are renowned for moving at a slow pace. Dreaming of a turtle may therefore symbolize that you are dealing with a process that feels very slow, such as something involving a complicated bureaucracy. You may be very frustrated with what seems to be endless delays.

You might look at What Does It Mean if You Dream of Being Pregnant? regarding patience and slow processes that must proceed at their own pace, because a turtle dream could have a similar message – whatever you are dealing with might just take however long it takes, whether that is convenient for you or not.

You might also look at the famous Serenity Prayer attributed to theologian Reinhold Niebuhr: “God, grant me the serenity to accept the things I cannot change, courage to change the things I can, and wisdom to know the difference.”

A family of turtles, The Slowskys, confronts this dilemma in a series of commercials for Xfinity Internet services. The parents just accept slowness as their way of life, while their son tries to encourage them to upgrade to faster Internet service.

A dream of turtles therefore could be encouraging you to find a way to do things faster in cases where that is possible.

Dreaming of a turtle may therefore symbolize that you need to put in steady work to reach some goal, even if it feels tedious and is not always fun in the moment. It may also symbolize that you have the ability to succeed through your own effort in a situation where you do not have a natural advantage.

Turtles have a reputation for long lives, though Britannica notes that reliable evidence is lacking for some of the more extreme claims. Your dreams, however, tend to focus more on the associations you have picked up throughout your own life than on whether those associations are always completely objectively accurate.

In spite of the exaggerated tales that exist regarding long-lived turtles, the general idea of longevity fits in well with some of the other turtle symbolism, in the sense that prioritizing things like safety and persistence is more likely (though not always guaranteed) to lead to reaching an old age than living a wild life in the fast lane. Dreaming of a turtle can symbolize this practical approach that is in line with the wisdom that a lot of people who have been around a long time would share.

Dreaming of a turtle may therefore symbolize a situation where you feel you need to prioritize safety at any cost, even if efficiency has to be sacrificed.

Atlas Obscura reports that Hindu and Native American mythology both contained stories to the effect that the flat world was balanced on the back of a giant turtle. The focus of these stories was the strength of the turtle’s shell.

In the Chinese version, however, it was the strength of the turtle’s legs that was emphasized, as a giant turtle’s legs were cut off and used to hold up the heavens as a canopy over the earth.

Sometimes a human might wish they could hide inside a turtle shell to get away from social interactions they don’t want to deal with, like fictional turtles The Slowskys were able to withdraw into their shells and pretend to be rocks to avoid their annoying neighbor.

The saying “come out of your shell” seems to speak as though a human having a turtle shell is possible. It is usually used to encourage a person to stop being shy and withdrawn.

Dreaming of a turtle may therefore symbolize a situation where you feel shy or are otherwise seeking to avoid social interaction. It is possible that that may be what you need to do to protect yourself, but it may also be time for you to take another look at the situation and see if it is actually safe for you to be more open.

Dream of a pet turtle escaping 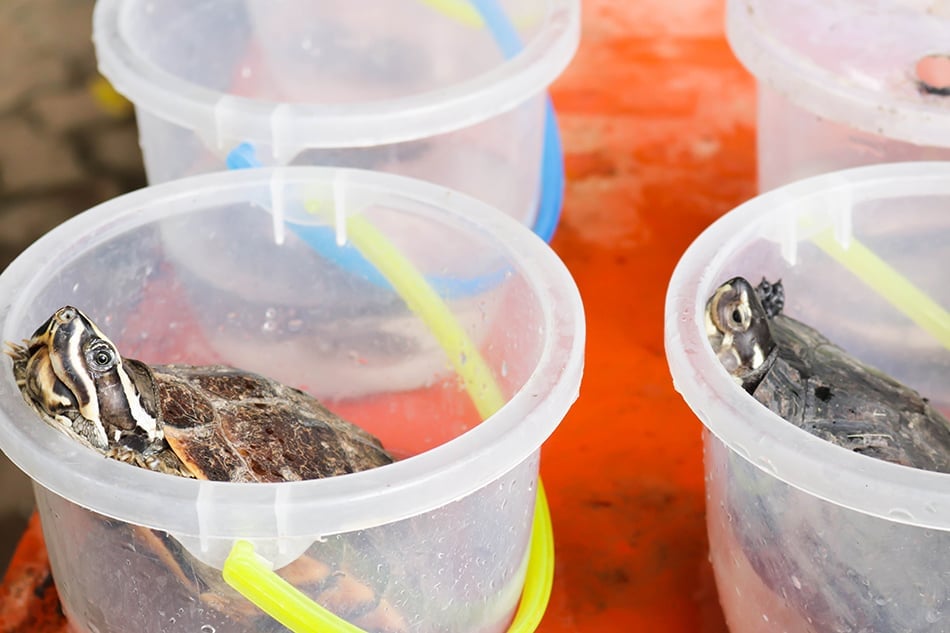 TurtleOwner.com reports that it is common for pet turtles to try to escape their tanks. When this happens, it usually means the turtle is reacting against something in their environment, like water that is dirty or at an uncomfortable temperature.

If you actually have a pet turtle, a dream of a turtle escaping might be a warning that something in your turtle’s environment needs attention.

If you don’t have a turtle, though, isn’t that a crazy mental image to think of a notoriously slow-moving creature escaping? It’s easy to imagine an animal that likes to run getting out just for the joy of running, but for a turtle, where moving seems to be an effort, there would have to be some very strong motivation to get out.

A dream of a turtle escaping could therefore be symbolic of you or someone else in your life finally leaving an abusive relationship or other unhealthy environment. Some people are willing to try longer than others to make such a situation work, but even a basically passive person can have a breaking point.

Dream of a turtle hiding in its shell 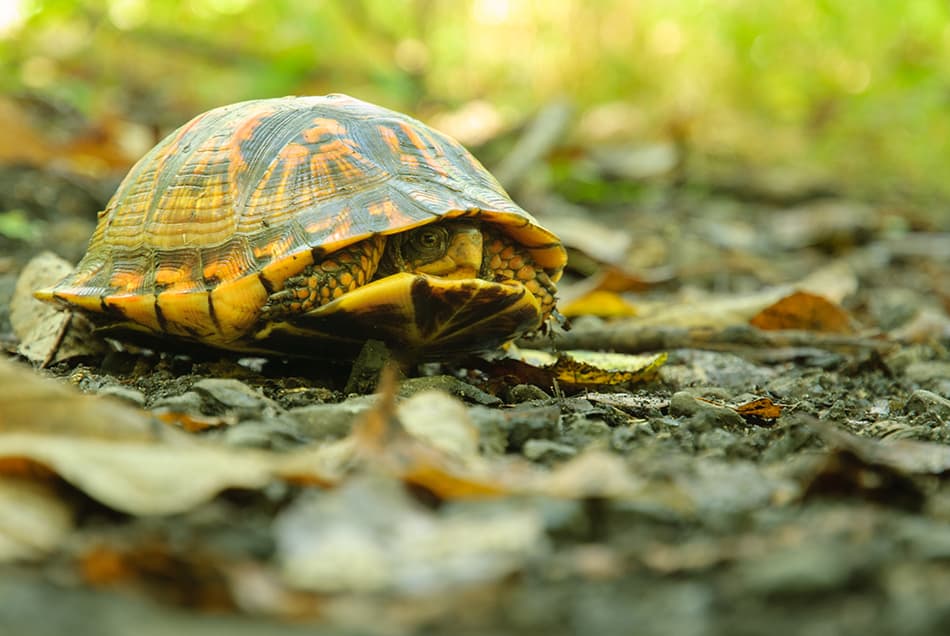 If you dream of a turtle hiding in its shell, this may symbolize a situation where you feel like you need to withdraw in order to be protected. The shell shows that you at least have the option of a safe place.

You might not be able to move forward in your life in any way while you are hiding out. In a truly threatening situation, though, just surviving may be enough of an achievement.

Alternatively, dreaming of a turtle hiding in its shell may symbolize that someone else is stonewalling you. You might feel frustrated that they are refusing to engage with you when you need to talk to them about something important.

Dream of a turtle biting 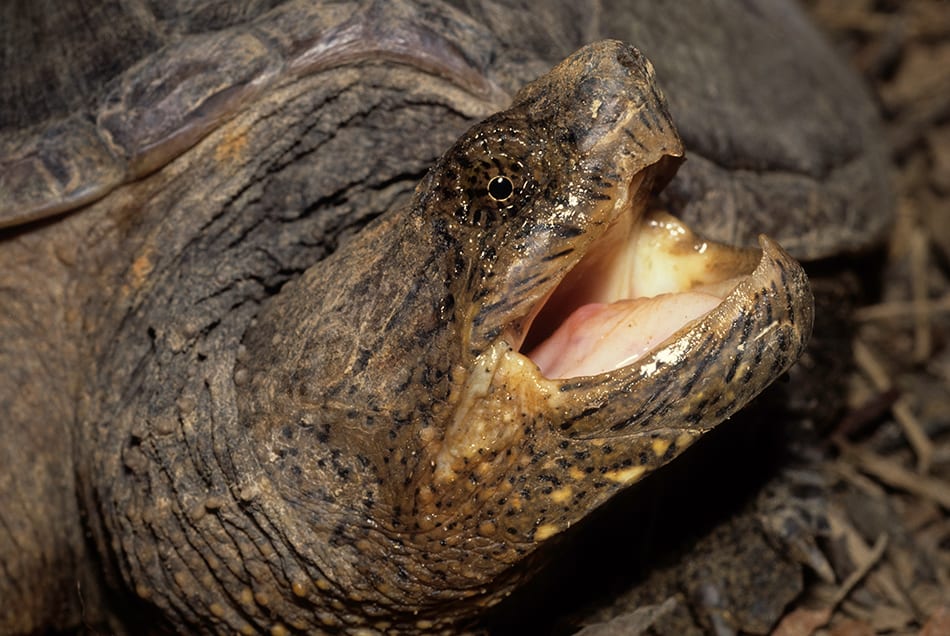 TurtleOwner.com reports that turtles generally do not bite unless they are provoked, or unless they mistake their human’s finger or toe for food.

If you dream of a turtle biting, this may have symbolism similar to that of a turtle escaping: you or someone else in your life who has patiently put up with a difficult situation for a long time has finally been pushed to the breaking point.

The difference between a dream of a turtle escaping and a dream of a turtle biting would be that biting is a response to a direct confrontation, while escaping is more of a general acknowledgement that the situation is not working out. Of course, if you get pushed to the point that you have to bite to defend yourself, you look like the bad guy for biting regardless of what led up to it, right? 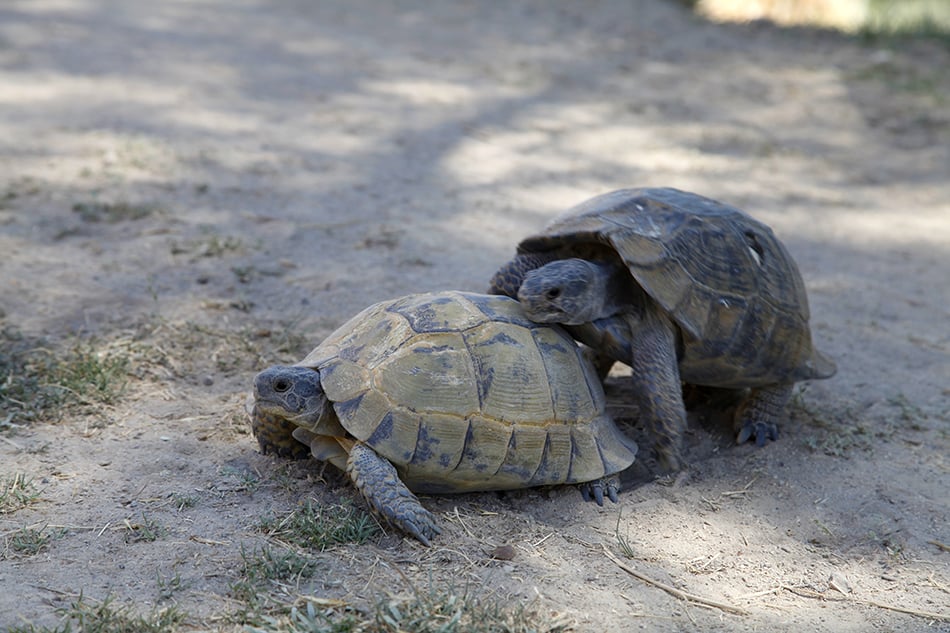 Britannica reports that the age at which turtles reach sexual maturity varies by species. Some are ready to reproduce at only two to three years old, while others take more than 40 years.

If you are a human who has been slower than others to find a mate, dreaming of turtles mating may symbolize that you are moving through life at your own pace, however slow it may feel.

Live Science describes the mating practices of sea turtles, which are aggressive by human standards. The male and female turtles can remain attached to each other for up to 24 hours.

The result is that the females lay multiple clutches of eggs at two-week intervals up to eight times over the course of a season.

Dreaming of turtles mating can therefore symbolize fertility, in the sense that you may be successful in finding a mate or having a baby if that is what you want to accomplish. It could also, however, symbolize that you feel like a fertility treatment you are pursuing is overly aggressive or invasive.

Dream of a turtle on its back 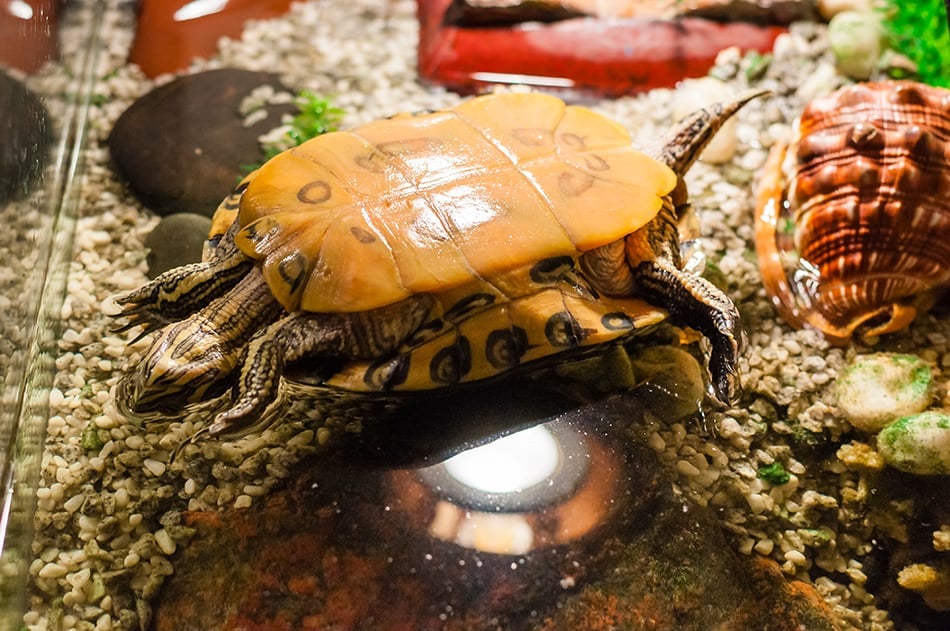 Tortoise Expert notes that it is dangerous for a tortoise to get flipped over onto its back because the tortoise’s internal organs are arranged such that the lungs get squished in that position, making it difficult for the tortoise to breathe.

Fortunately tortoises are often able to turn themselves right side up if they get rolled over on their backs. Tortoises have even been known to cooperate and help each other get back up when necessary.

If you dream of a turtle on its back, you are in a vulnerable position. Whether you were pushed into that position by someone else or intentionally took a risk in opening up on your own, you are stripped of the things that protect you.

Look at the role of others in the dream. If someone helps the turtle get rolled back over, you might get needed assistance from others in your life, though you might need to be vulnerable and let them know what your needs are first.

If someone is intentionally putting the turtle on its back, though, the dream might symbolize that there is cruelty in your life, whether that is others being cruel to you or you being cruel to others.

Turtles are practical creatures, and the symbolism around them can reflect a variety of practical concerns. They are so practical, though, that they can symbolize taking it too far, to the point that excess caution makes it impossible to get anything done.

As with any other dream, what kind of person you are coming into it might affect the interpretation. If you are generally wild and impulsive, dreaming of a turtle might advise you to tone it down some.

If you have a lot of turtle-like qualities already, though, dreaming of a turtle might applaud you for that. It might also show you that you have space to relax a little.