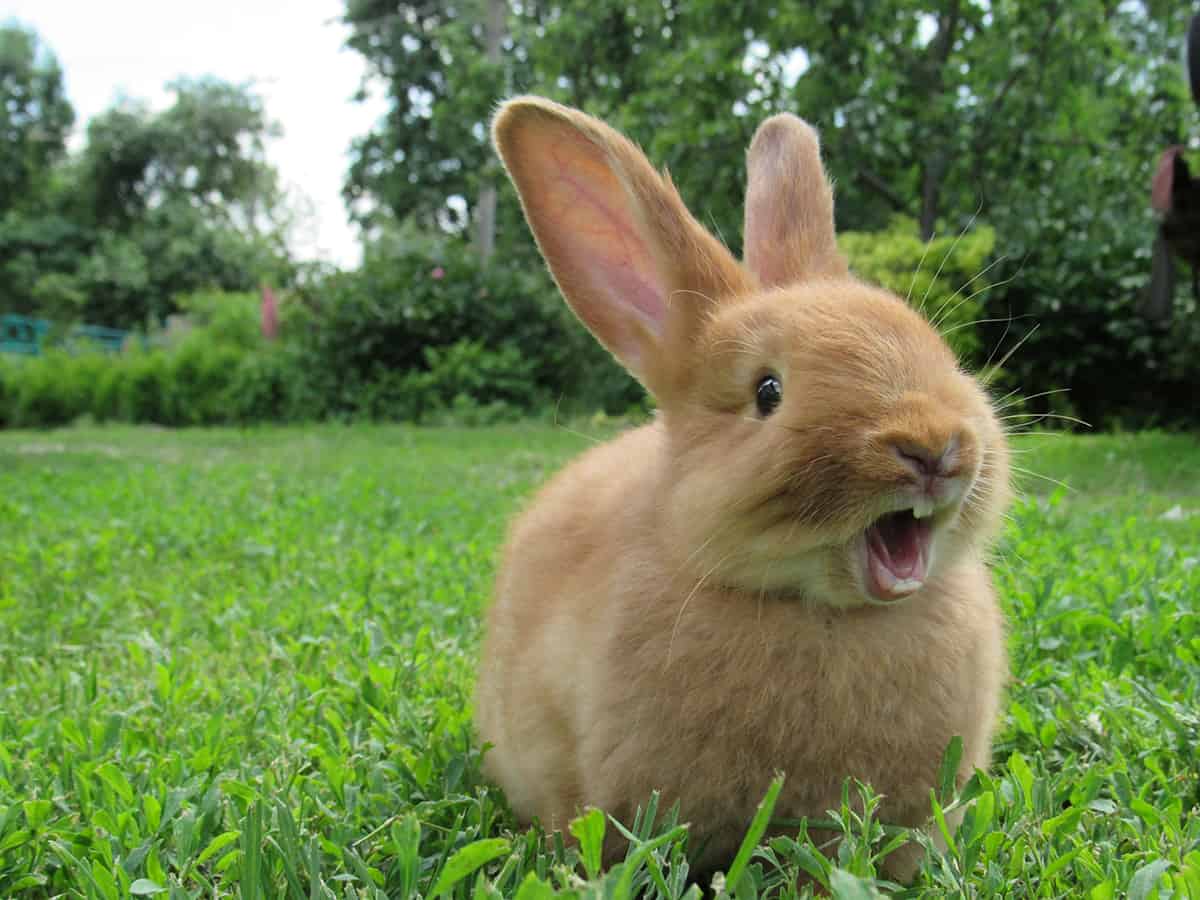 The commercials for Trix cereal often feature a cartoon white rabbit who is regularly called a “Silly rabbit.” However, rabbits are actually smarter than they often get credit for.

Once you learn what seeing a rabbit in your dream can mean, you might wonder if looking silly is just another strategy rabbits use to protect themselves from everyone who is out to get them.

Rabbits are vulnerable to predators, but they are also capable of cleverness, shown in the complex underground warrens they construct to live in. Rabbits also have a reputation for fertility.

Your rabbit dream meaning can show that one of these qualities of rabbits is important in your life at this time. If your dream emphasizes the rabbit being a particular color, the symbolism of that color may combine with rabbit dream symbolism to give you additional insights. 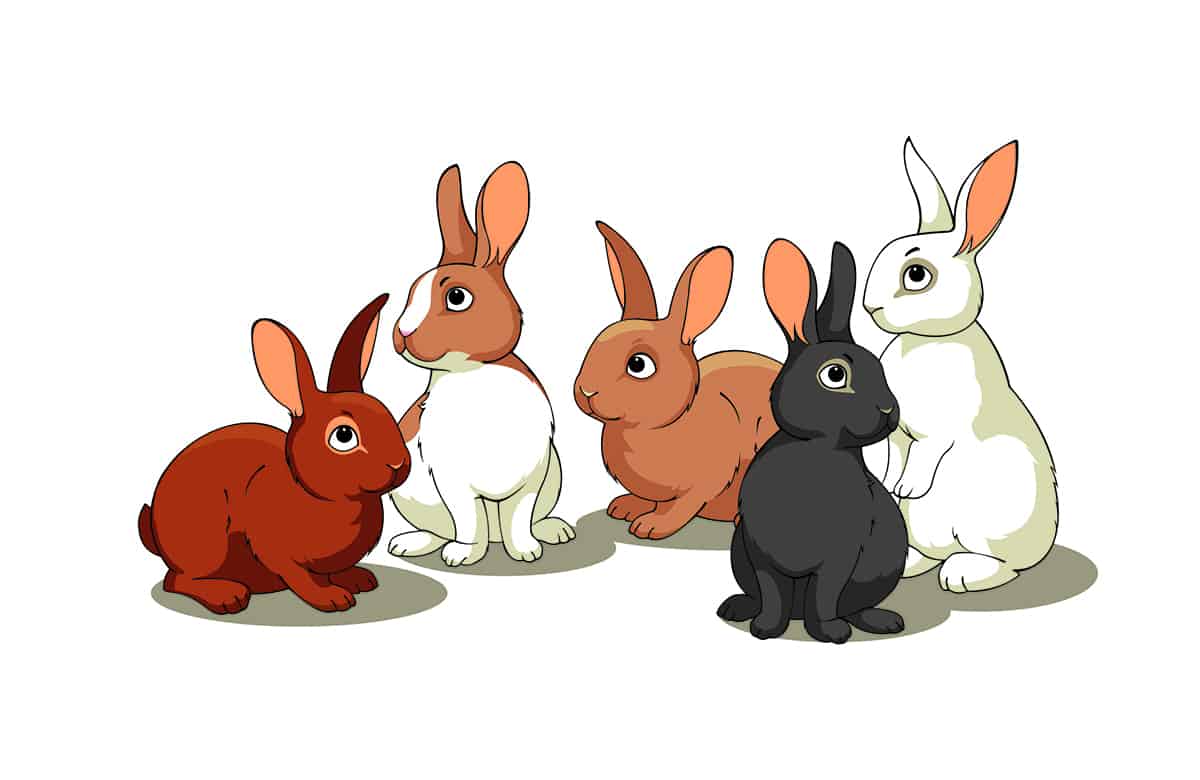 In the Looney Tunes cartoons, Bugs Bunny is often pursued by hunter Elmer Fudd, but Bugs Bunny is always clever enough to get away. Dreaming of a rabbit could symbolize that you have the cleverness to outwit someone who is making your life difficult.

If you relate more to Elmer Fudd’s position, though, your dream of a rabbit could symbolize that you are losing conflicts you think you should be winning. You may need to look at whether having an entitled attitude is holding you back.

Rabbits need their ingenuity because they generally are prey animals rather than predators. Dreaming of a rabbit could therefore symbolize that you are vulnerable, or that you feel responsible for protecting someone else in your life who is vulnerable.

However, feeling vulnerable can sometimes lead to feeling paranoid. Your rabbit dream might also symbolize that you need to look at the things you perceive as threatening more carefully, as you may feel more threatened than you truly are.

In a situation where it is necessary to fight or flee, a rabbit is generally better off fleeing. In a human context, John Updike’s Rabbit Series of novels tells the story of a man, nicknamed Rabbit, who has escape as a major theme in his life.

Dreaming of a rabbit could therefore symbolize that you are tempted to run away from a problem that you are having. If you are wondering whether to fight or flee, your rabbit dream might suggest that fleeing is your safer option.

The saying “breed like rabbits” refers to having many babies in a short period of time, as rabbits are known to produce a large number of offspring rapidly. Dreaming of rabbits could therefore symbolize that there seem to be a lot of babies around you lately. You might feel left out if it seems like everyone else is having a baby and you are not.

However, if you are the one expanding your family, dreaming of rabbits could show you have some anxiety about it. While you might enjoy the physical act of making a baby, humans can find it harder than rabbits do to pay the bills.

In the Japanese folktale of the Rabbit on the Moon, the Man on the Moon came to Earth disguised as a beggar and asked for food from three animals: a fox, a monkey, and a rabbit. The rabbit, unable to provide anything else, threw himself onto a fire to feed the beggar. The beggar, impressed by the rabbit’s sacrifice, then took the rabbit back to the moon with him, and this is why the silhouette of a rabbit is sometimes visible on a full moon.

Especially if you are familiar with this story, dreaming of a rabbit could symbolize that you feel like you are sacrificing yourself to help someone else. You may or may not ever be rewarded for making this sacrifice; can you live with it if you are not rewarded?

Dream of a rabbit warren 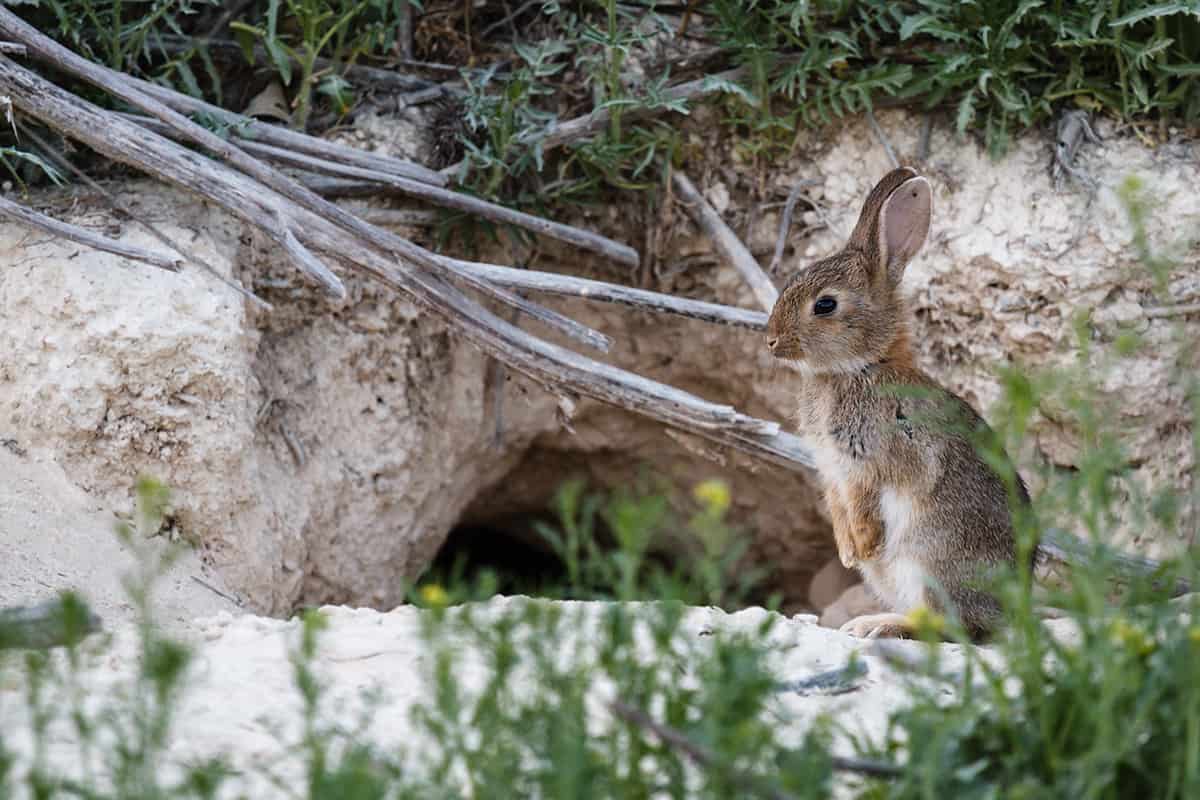 Grammarist reports that the idiom “down the rabbit hole,” which is often used to describe Internet searches that lead deep in unexpected directions, is inspired by the book Alice’s Adventures in Wonderland, which in turn inspired the movie Alice in Wonderland. In that story, Alice enters Wonderland through the White Rabbit’s rabbit hole.

Though Wonderland is fictional, there is a grain of truth to this saying. Rabbits live in complex underground networks of tunnels called warrens, according to Sciencing. As rabbits are prey animals, they must be careful to protect themselves from predators. Being underground is enough to get away from many predators, but the complexity of the warrens provides an additional layer of protection from those predators that are able to access rabbit holes.

Dreaming of a rabbit warren or rabbit hole could therefore symbolize that you are involved in a situation that is complicated and perhaps a bit confusing. However, if you are able to keep track of all the details, your efforts could turn out to be good for you. 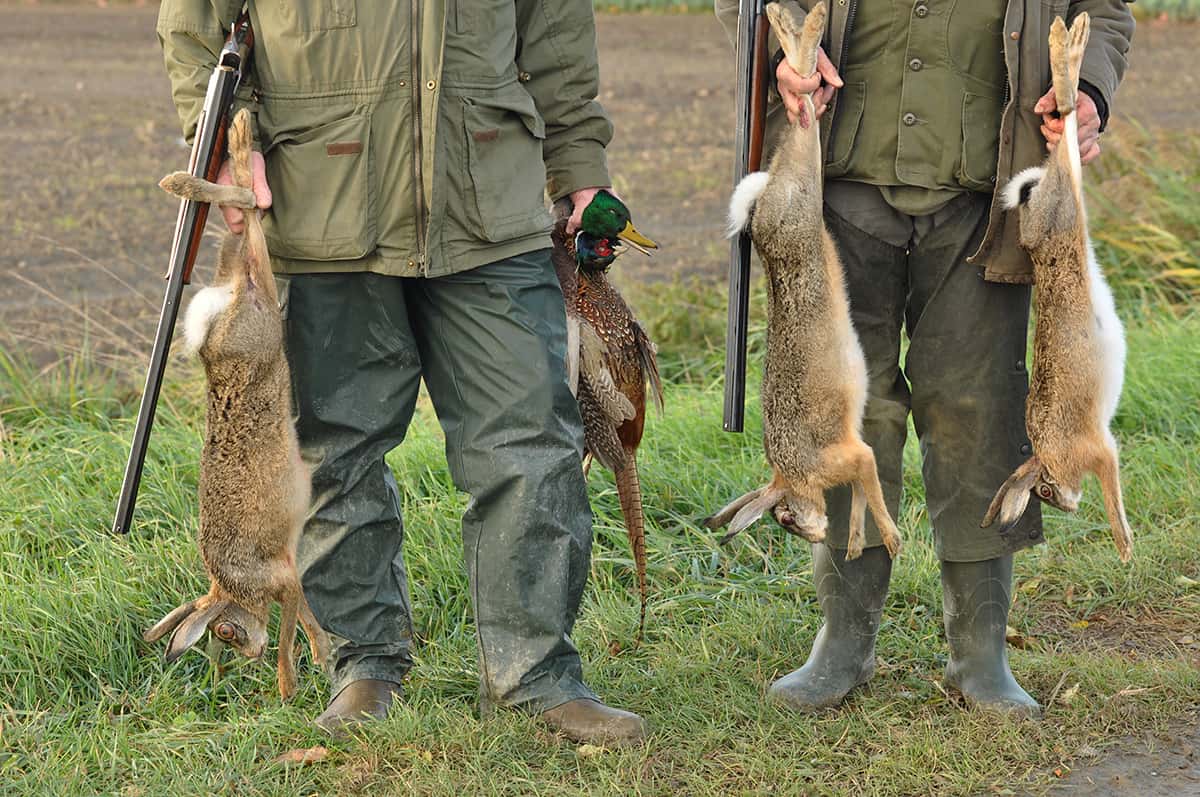 If you dream of hunting rabbits for food because you cannot otherwise feed yourself, this could emphasize the sacrifice component of rabbit dream symbolism. It might symbolize a situation where you feel guilty that you cannot meet some need of yours without causing inconvenience or worse to someone else.

If you dream of hunting rabbits for reasons unrelated to your survival, this could symbolize that you are jealous of others who have qualities symbolically associated with rabbits. You may find it easier to destroy those qualities in others than to find a way to develop those qualities in yourself. See also shooting dream symbolism.

Dream of a rabbit of a particular color

If the color of the rabbit is important in your dream about a rabbit, you may need to combine the symbolism of that color with rabbit dream symbolism. 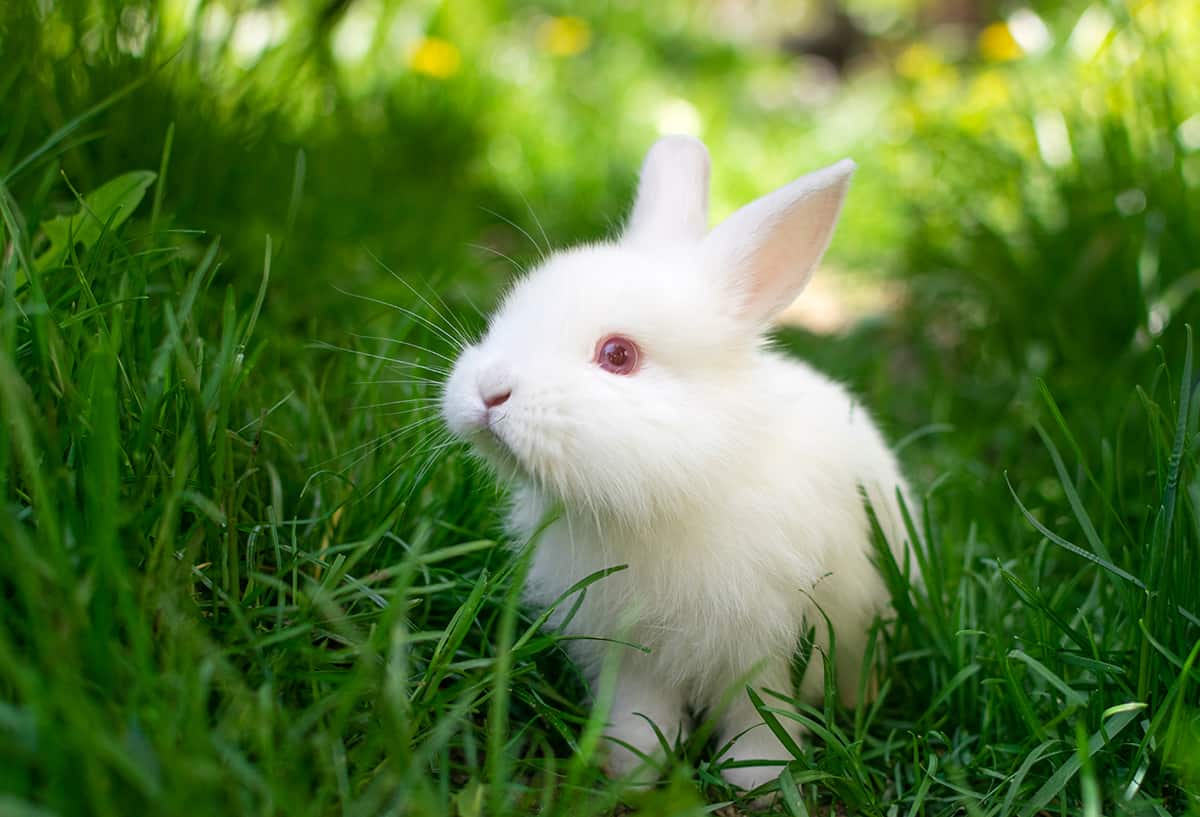 In the Disney movie Alice in Wonderland, the White Rabbit served as Alice’s guide in the strange world of Wonderland. White can symbolize spirituality, so it makes a lot of sense that a white rabbit in your dream could similarly represent a spiritual guide. If you need to make a spiritual journey, you may not find yourself alone.

A brown rabbit might blend in well in many natural settings. Dreaming of a brown rabbit could therefore symbolize that the best way for you to be clever like a rabbit at this time is to blend in and avoid drawing attention to yourself. 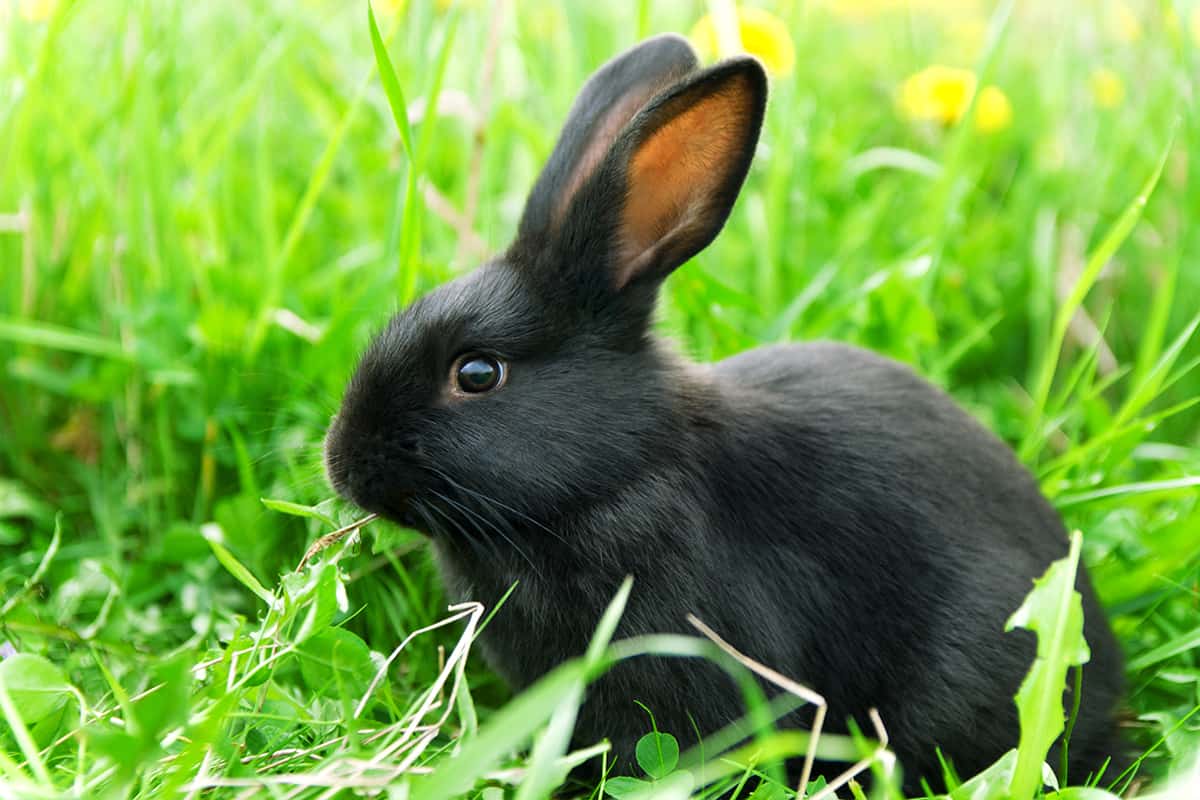 Black rabbits are rare in nature, though Legendary Dartmoor notes that there are some wild black rabbits in the Dartmoor National Park in England. In earlier times, keepers of rabbit warrens there may have valued black rabbits because it was easy to detect their absence; if one of the black rabbits was obviously gone, the keeper would be alerted that a poacher was at work. This story emphasizes the element of sacrifice in rabbit dream symbolism.

Dreaming of a black rabbit could therefore symbolize that something about you makes you conspicuous. Even if this is inconvenient or dangerous for you, you may be able to help others by your example. 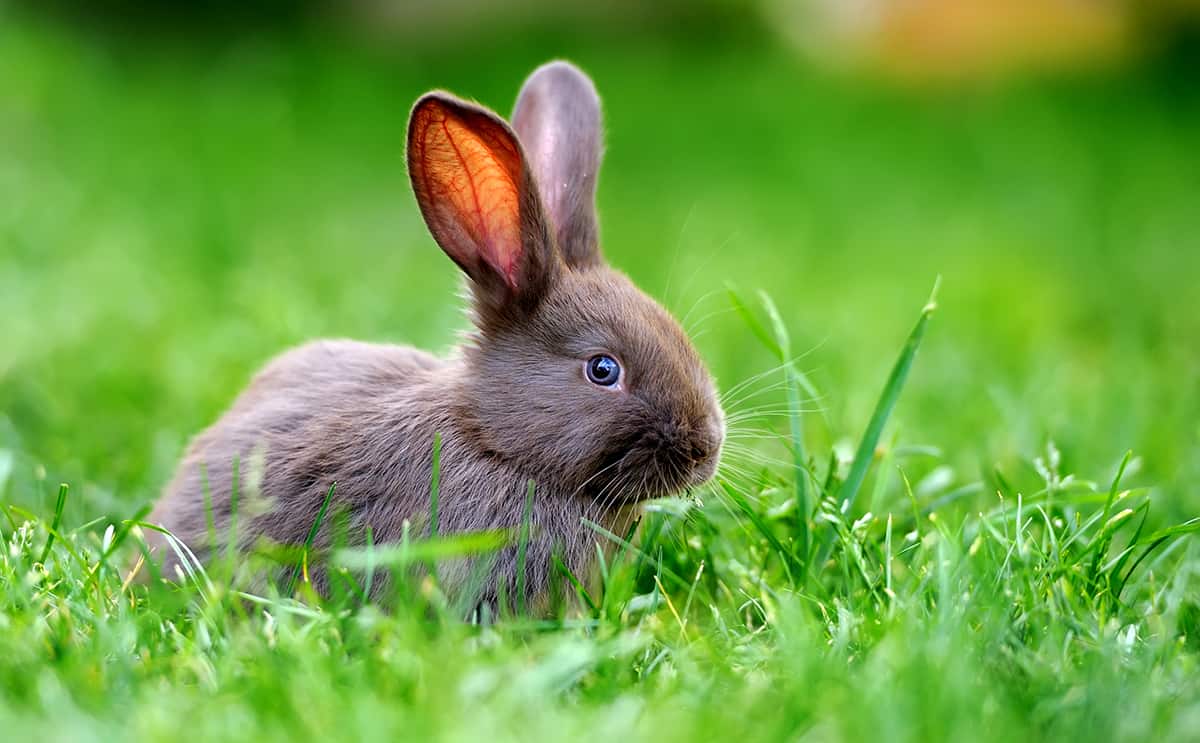 In moral conflicts that people describe as black and white, the parts that don’t have easy answers are referred to as grey areas. Dreaming of a grey rabbit could therefore symbolize that the best way for you to be clever like a rabbit at this time is to embrace ambiguity. Committing to one extreme or the other might lead to a bad outcome for you, so stay where no one can catch you.

Lilac rabbits are bred for a pinkish dove-gray color, but truly pink rabbits do not exist in nature. However, the fur of pet rabbits is sometimes dyed with food coloring so a pet owner can tell their rabbits apart or just have a little fun.

Dreaming of a pink rabbit therefore probably has more to do with humans than it does with rabbits. It could show that people in your life are choosing to approach the more complicated parts of rabbit symbolism, like sacrifice or fertility, in an awkwardly sentimental way rather than dealing with their emotions honestly.

An Easter Bunny dream meaning would be similar to a pink rabbit dream meaning in that way. While the Christian story of Easter focuses on the sacrifice and resurrection of Jesus Christ, the cartoonish Easter Bunny hints distantly at similar themes of sacrifice but can’t quite go all the way there.

Rabbits are more complex creatures than their media depictions like the Easter Bunny give them credit for being. Their position as prey animals shapes many of their life strategies, but they rise to the occasion, giving their predators a frustrating challenge.

What Does It Mean to Dream of a Black Cat?
Recent Posts