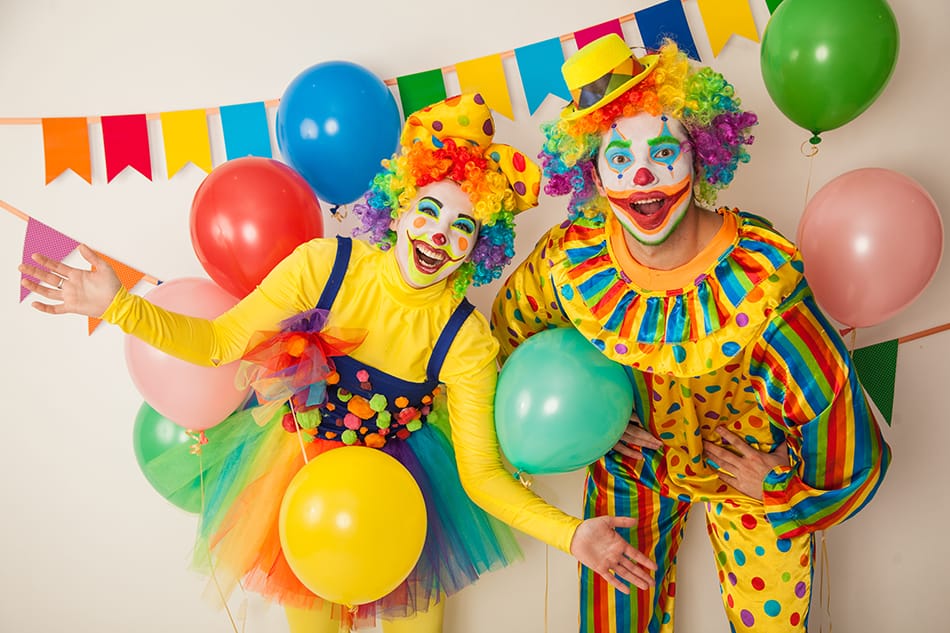 Whether you love clowns or hate them, seeing a clown in your dream is certainly a distinctive event. The wild outfits and makeup of clowns make them hard to miss.

Clowns are polarizing figures, and their meaning in your dream can be bad or good depending on the situation.

Clowns are supposed to bring good-natured entertainment. If this fits with the mood of your clown dream, it could symbolize that you need to follow what brings you joy, no matter how goofy it is.

Clowns are not taken seriously by society, though, and there is both bad and good to this status. A clown dream could symbolize that you are bringing a bad reputation on yourself by acting ridiculous or even abusing alcohol.

A dream involving killer clowns or clowns attacking could show that your frustration with people not taking you seriously has the potential to become destructive. Alternately, it could represent a situation where someone is getting away with hurtful behavior by claiming they are just joking.

The good of being a clown, though, is that you can sometimes tell uncomfortable truths in a way people are willing to hear. A clown dream could therefore symbolize this kind of honesty that acknowledges the absurdity common to everyone’s human condition. 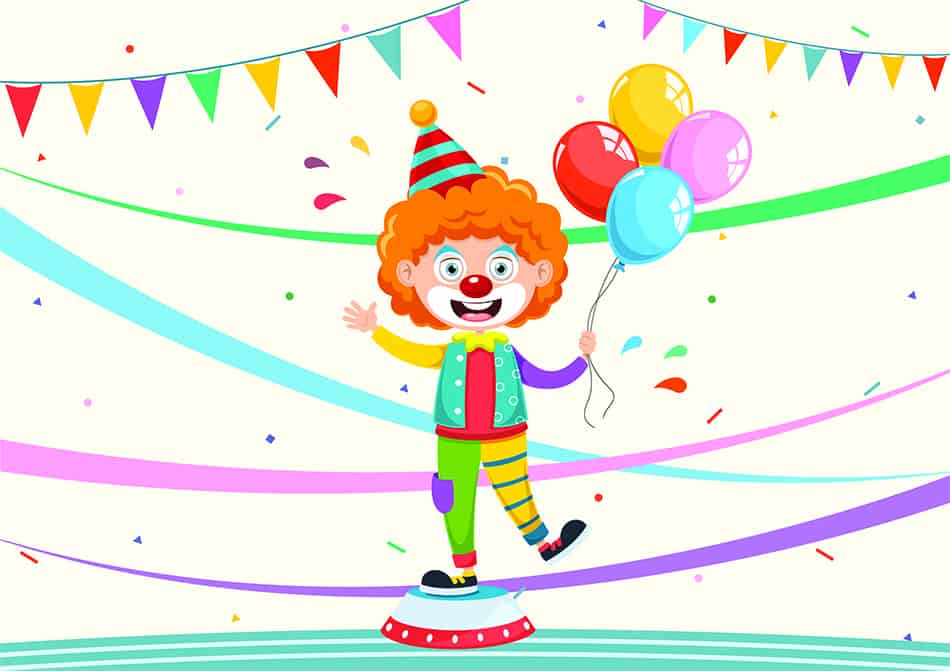 At their best, clowns bring entertainment that makes people feel good. Dreaming of clowns in a positive way could therefore symbolize that you need more joy in your life.

Alternately, a happy clown dream might show that something is going well for you already, and you should continue whatever that is. Such a dream could give you permission to listen to your own feelings about what is bringing you joy, even if you think you are supposed to be focused on more serious matters.

A clown dream can symbolize that you feel like someone in your life is acting ridiculous like clowns do. Alternately, your clown dream might chastise you for being the class clown at school or goofing off at work. Even if you are able to justify to yourself what you are doing, you might suspect on some level that you have gone too far.

Life does need humor and levity, but there can be a point where it crosses a line. Your clown dream may therefore ask you whether you are using excessive entertainment to avoid serious issues that really do need to be addressed.

Dreaming of a clown can symbolize that you have a mocking attitude toward an authority figure in your life. You may feel like you see through this person’s pompous façade and know how incompetent they really are.

Clowns are not held to the same standard of seriousness that most people are, and an advantage of this is that they can tell uncomfortable truths and get away with it. Sometimes the way they do so is very funny.

If your level of disappointment regarding an authority figure is so deep that it provokes you to have a clown dream, though, this might come from having overly high expectations for that person and even idealizing them. A clown dream could push you to remember that everyone is subject to the absurdity of the human condition – even the people you expect more from.

There is a stereotype, reinforced by the classic song “The Tears Of A Clown” by Smokey Robinson & The Miracles, that clowns who portray a happy image are secretly sad underneath. Whether or not this is really true of clowns, it is true of a lot of people.

Your clown dream could therefore symbolize that you are trying to put on a happy face for others and not let them know how sad you really are.

Some of the distinctive features of clowns, such as red noses and acting silly, are similar to features associated with alcoholism. A clown dream could therefore symbolize that you or someone in your life is struggling with alcohol abuse. 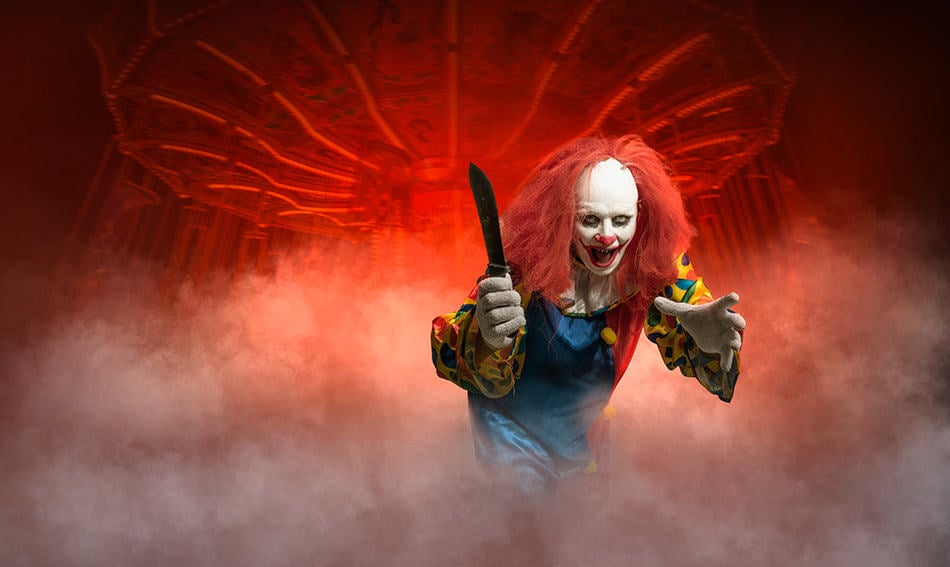 A dream of clowns attacking could symbolize that someone in your life who makes a show of appearing harmless is really up to no good. This might be similar to the idea of a wolf in sheep’s clothing.

When the clowns attacked you in your dream, what did they do? If whatever they did was not likely to be fatal or even cause damage, it could symbolize that you are overreacting to some provocation in your life.

Alternately, a dream of being attacked by clowns, especially if you are seriously hurt by the attack, could symbolize the type of situation where someone is playing pranks that they claim are innocent, but their behavior really is causing a problem for others regardless of what they intend.

Killer clowns have unfortunately existed in real life, such as John Wayne Gacy. It is hard to say what could push someone over the edge to do that, but being a misfit in some way might be part of the problem.

A clown is someone who has rejected a serious place in society. In some cases, however, society rejected them first, routing them into the role of clown whether they wanted it or not.

A dream of a killer clown could therefore represent that you feel like people don’t take you, or some important part of you, seriously. The killer clown might symbolize the potential for your own frustration about this to become destructive.

Dream of putting on clown makeup 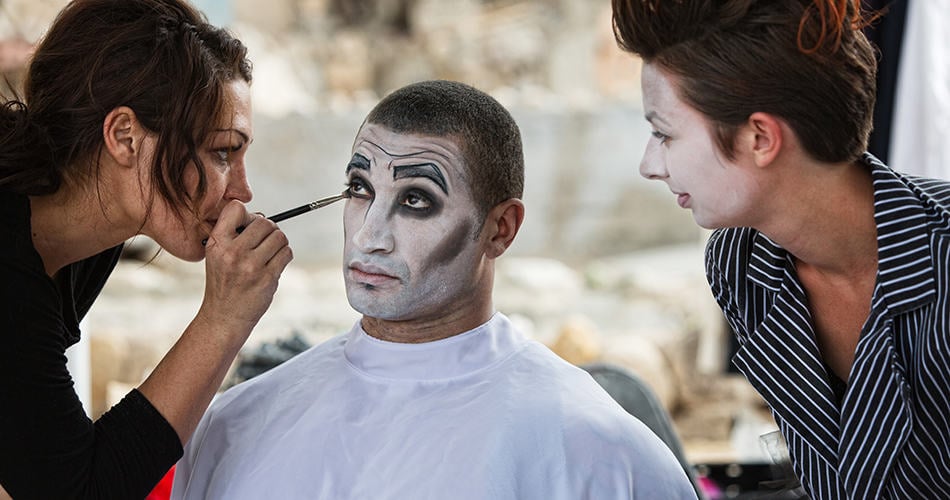 If you dream of putting on clown makeup, and this is not something you would ordinarily do in your waking life, this could symbolize that you feel there is something ridiculous about the grooming that society expects of you.

Wearing more makeup than usual for a formal event like a wedding could provoke a dream of this sort. A similar dynamic can be involved in penguin dream symbolism, as tuxedos are often compared to the coloring of penguins.

Dream of a clown car 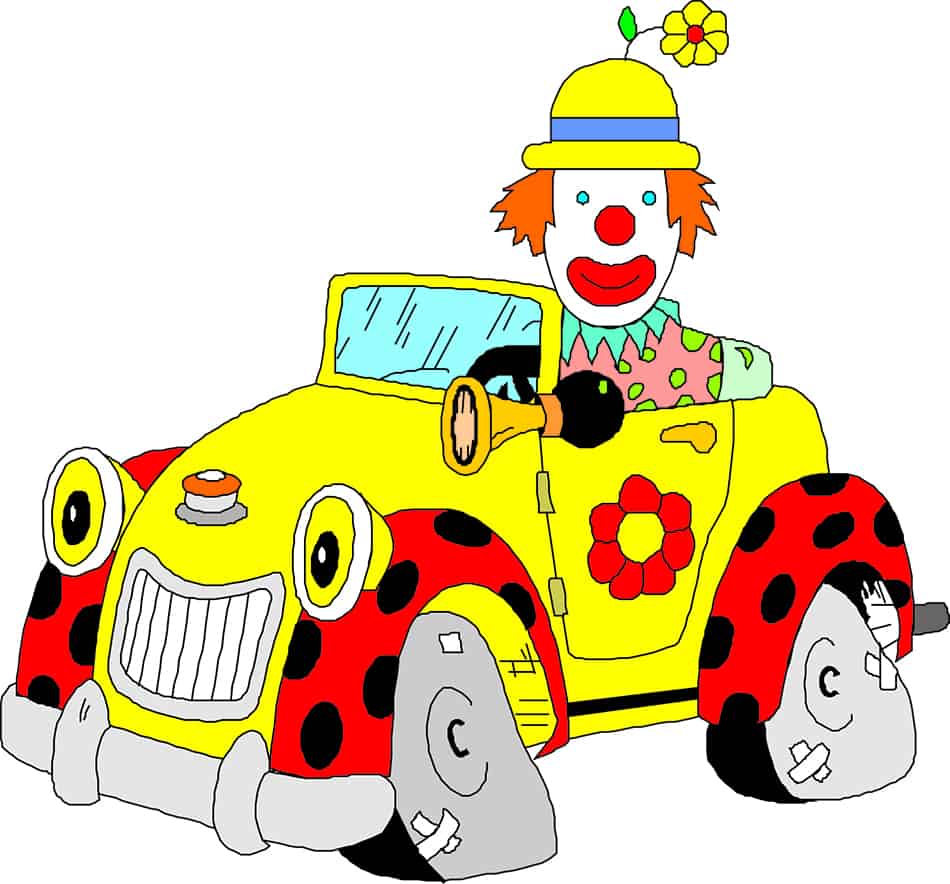 A common gag in clown performances is to have a large number of clowns exit a very small car. As described by The News Wheel, the car is specially prepared for this purpose. Merriam-Webster also notes that the term “clown car” can be used figuratively to refer to a situation that has become overcrowded.

Dreaming of a clown car can symbolize that some group of people you are involved with, like your family or your workplace, is collectively dysfunctional. It might specifically be a situation where too many cooks spoil the soup – where there are so many people involved in any decision that has to be made that it is impossible to move forward.

On the other hand, it takes an impressive amount of coordination to make a clown car stunt actually work. A dream of a clown car could therefore symbolize a situation where teamwork is actually going well for you, even if it may be a little goofy at times. 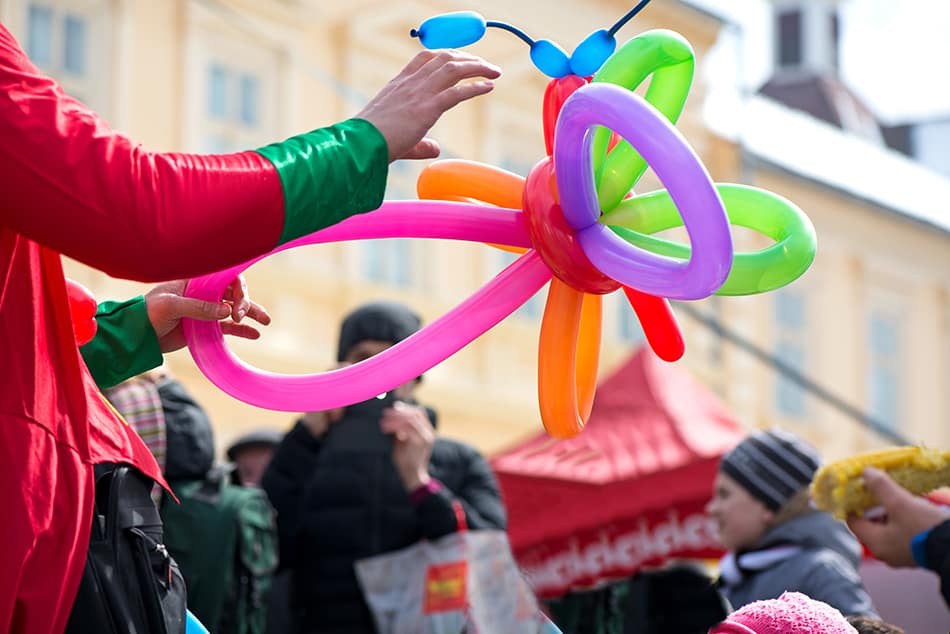 Dreaming of a clown making balloon animals could symbolize the transience of life, as balloon animals are typically impermanent even in a best-case scenario. However long they last, they have the clown’s breath in them, like humans have the breath of life.

Embracing the absurdity and impermanence of life may be key to enjoying it. See also death and dying dream symbolism.

Dream of a clown juggling 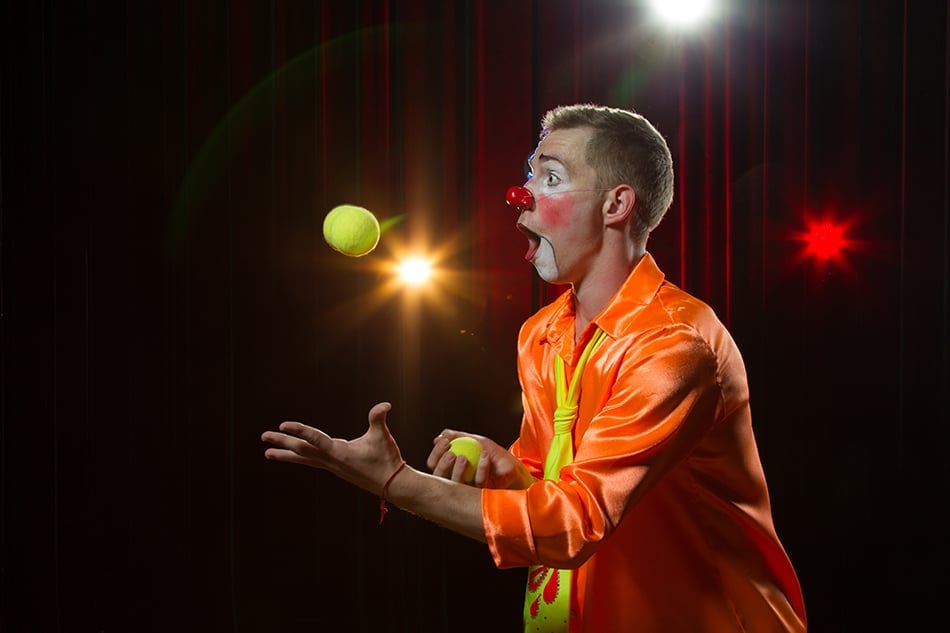 Dreaming of a clown juggling can symbolize that you are overwhelmed by your responsibilities. You might feel like you are juggling a lot of tasks and duties.

The clown, however, brings the element of absurdity into the situation. This dream could symbolize that, though you are very busy, you are not really accomplishing meaningful. 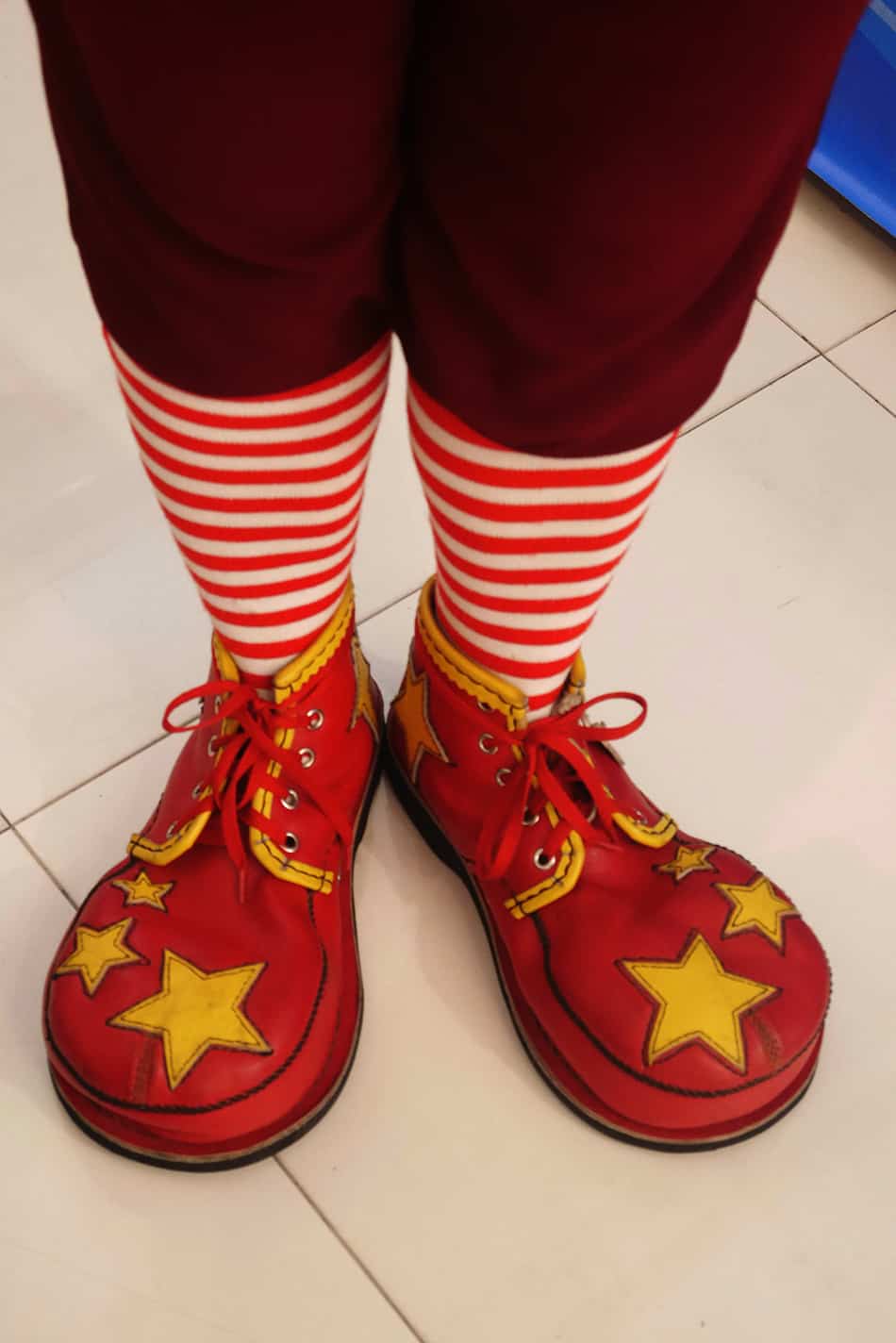 Feet in general symbolize your ability to be grounded in reality and take action to move toward your goals. Shoes are supposed to help you achieve that, as noted in shoe dream symbolism.

Clowns, however, are known for wearing oversized shoes. If you dream of wearing clown shoes that are so big that they interfere with your ability to move around easily, this could symbolize that you have trouble achieving your goals because you don’t take yourself seriously enough.

A dream of clowns can ask you to look at how you handle the standards of society in your life. If you insist on serious adherence to protocol and are too repressive of dissent, you might wind up with killer clowns who use that suppressed energy in a destructive way.

If you make room for the goofiness of clowns, however, you may be blessed by their honesty. The truth of clowns is that life is absurd for everyone, and embracing that can lead to joy and peace.