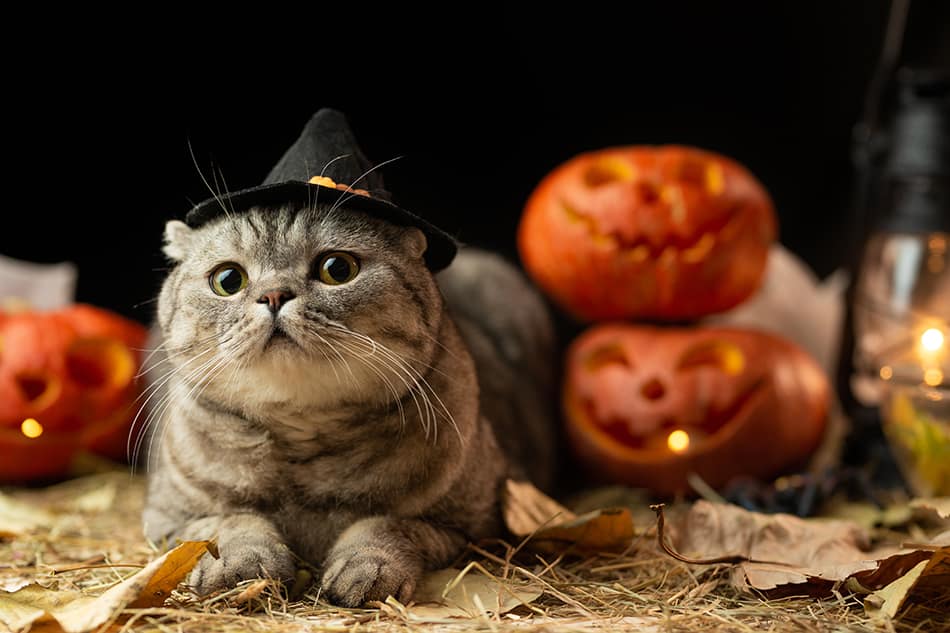 Cats are beautiful creatures and have been revered by humans for their many strengths throughout the ages. Their sleek profiles and slinky movements have made cats stand out for their unique look. Our relationship with cats has been assisted by the evolution of housecats over the millennia, too. The domesticated critter has given us some insight into what cats are really like in the wild, connecting us to our own wildish nature in a powerful way. Cat symbols are everywhere in modern society. So, if you’re dreaming about cats, you’re probably not alone.

Religious cat-themed relics can be found dating back to the beginning of human civilization. Cats were worshipped by the ancient Egyptians as being powerful creatures with inherent magic of their own. Scientists tell us cats are the only animals on earth to have actually domesticated themselves, rather than being domesticated by humans. All of these things make cats very special creatures who are perhaps a little bit mysterious. That makes cat dreams feel all the more confusing. However, we can understand the meaning underlying the cat symbolism in our dreams if we take it step by step.

If you’re dreaming about a particular housecat whom you know, or know of, then you might not get much help from this guide, which is here to help tease out meaning for people who are dreaming about cats but don’t know why. On the other hand, perhaps you have recently had a dream about a wild cat. Or perhaps it was a domestic cat but it’s not one you know. Then you might use the symbolism about cats found in this article to help you understand the cat dream interpretation and meaning.

What Do Cats Symbolize In Your Dreams? 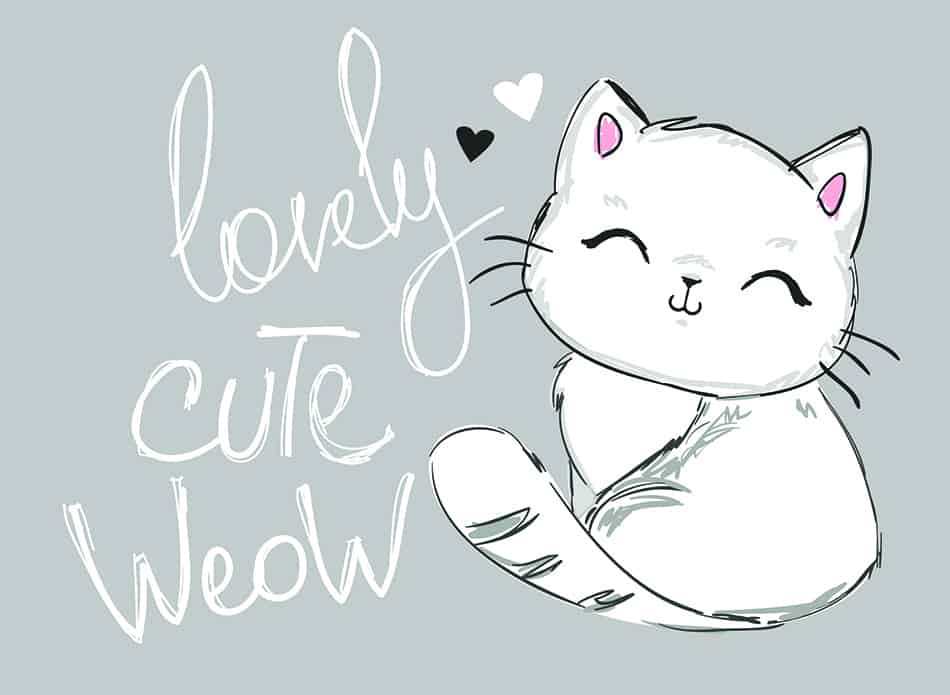 Pet owners know one thing for certain about housecats: they are far more independent than dogs. This may be due to the fact, as stated above, that cats actually domesticated themselves. They were never “broken” by humans, so to speak. Ours is a relationship of convenience in many ways, and even a domesticated cat will not fail to let you know it – even if they are totally bluffing. However, humans’ association with cats as being independent goes back to the beginnings of our relationship. Therefore, this is a deeply embedded symbol that goes along with the cat wherever it appears.

Despite their independent streak, cats give and receive an abundance of affection. As social animals, they exhibit bonding habits within their family groups, and some of these behaviors will even be transferred onto their human owners in the case of domesticated cats. For instance, some cats will gladly groom their human companions. Watch out, however, as most cats don’t know what to do when they get to the end of the reach of their lick. Many times they will simply bite off the “excess,” giving their humans a curious looking haircut.

For whatever reason, humans have come to associate dogs with masculine traits and cats with feminine ones over the eons. It is perhaps due to the slinky movements of felines in general that they have long been associated with femininity and especially with female sexuality. Whatever the cause, however, cats often symbolize the wildish feminine nature hidden inside each of us (without regard to gender). They are symbols of female fertility, vitality, and sensuality.

Cats are said to have nine lives, and we often say that they seem to always land on their feet. That’s why humans have associated cats with an almost uncanny ability to survive dangerous mishaps and even walk away from them without a scratch. Cats will often go into hiding in survival situations and can go for long periods of time without food or water for as long as they feel the need.

We’ve all seen the internet videos of attack cats keeping their homes, their yards, and their humans safe from would-be attackers. This one even defended a toddler on a riding toy from a neighbor’s dog. The truth is, cats are fierce defenders of their home turf and will lash out if they remotely think they have the strength to take on an opponent. Not all cats are this way, however. Some are just like Garfield the cat and want to sit around all day eating lasagna. Still, we are familiar enough with the archetypal attack cat (and we’ve seen enough documentaries about cats in the wild) to know that it’s a real thing. We have long ago internalized cats symbolically as having claws that slash, teeth that could rip open flesh, and the warrior’s heart necessary to attack whenever and wherever the call comes.

Dreams about an abused cat/kitten 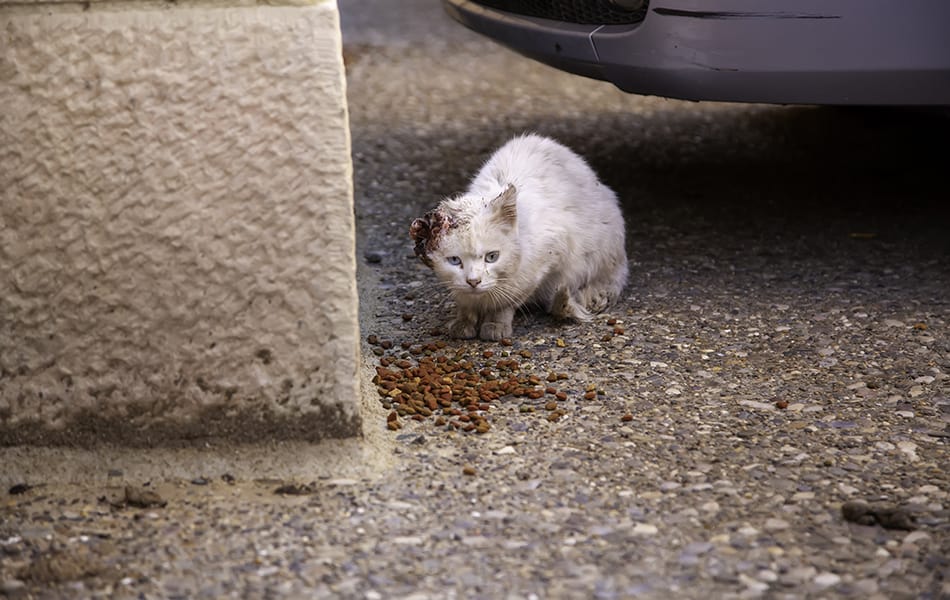 If you’re dreaming about an abused cat or kitten, this represents the survival aspect of the cat’s nature. This dream could represent the need to care for your emotional and physical needs. Take heed if you’ve been working too hard or burning the candle at both ends. It’s important also to note that it’s possible that the kitten represents part of us that is abused, whether past or present. So pay close attention to its surroundings for clues as to its true interpretation. In addition, it’s not impossible to be both the abuser and the abused. Therefore, look for situations in which you are the one who is depriving yourself of getting your needs met. If that is the case, your dream is begging you to make a change and make it now.

Dreams about a cat cleaning itself 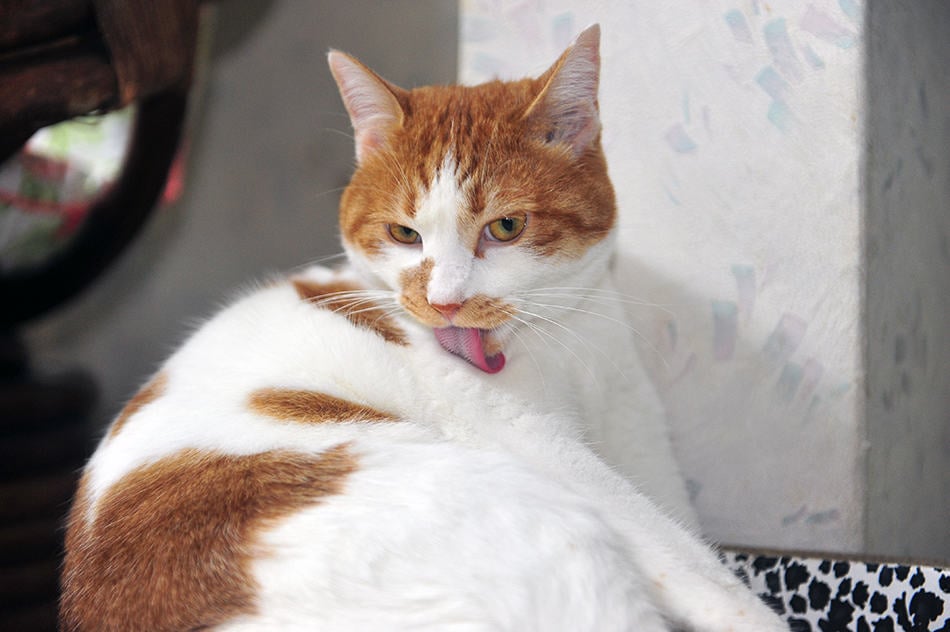 A cat engaged in self-cleaning behavior is a contented, happy cat. This cat symbol indicates their independent and self-reliant nature, because they are more than capable of grooming themselves and keeping their coats clean. Cats are also meticulous in nature and prefer to be kept clean. If you’re dreaming about such a cat, consider an situation in your life where self-reliance and meticulousness is called for. That could be symbolically represented in your dream by the cat. One final note about this behavior: cats exhibit this self-grooming behavior on others in their family unit as a social bonding habit.

Dreams about a cat walking on a ledge

A cat walking on a ledge is not likely to fall. Their balance is impeccable, their sure-footedness legendary. This may be a symbol of independence and survival. However, your dream could also be pointing you toward a situation in your life in which you feel like you’re walking on a tightrope of some kind. This could simply be referring to a situation in which you must perform, such as performing  your duties at work or performing in front of an audience. The ledge upon which the cat is walking could make you feel superior, like you can’t possibly fail, or full of anxiety, like you can’t imagine why you ever got up there in the first place. Take note of your particular point of view as well as your gut feelings to help you make sense of the cat walking on a ledge in your dream.

Dreams about a sleeping cat 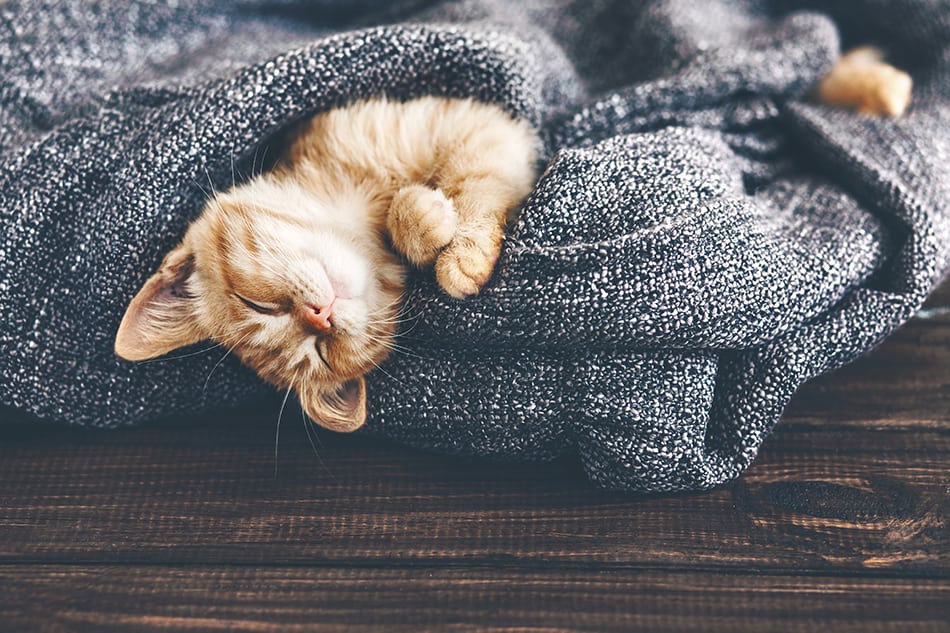 There are a few different ways to interpret a sleeping cat in your dream. The first is that the cat represents affection and companionship because none but his friends would ever get to see the cat in such a vulnerable position. However, anytime you witness another creature sleeping, we have to consider what sleep represents: something you may be unaware of. Since it’s a sleeping cat, it may represent a serious situation or dangerous threat that you’re not aware of. On the other hand, sleeping cats also connote cat napping, which indicates a temporary situation. So, take note of any surrounding details and emotional reactions you had to the dream. Those will help you sort out its true meaning.

Dreams about a purring cat 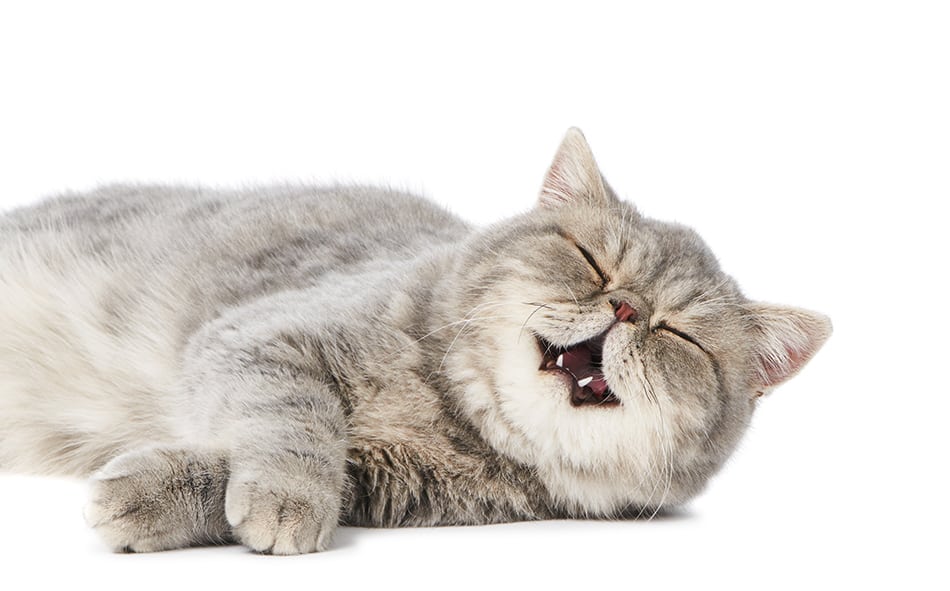 Much like a sleeping cat, a purring cat is witnessed only by friends and never by enemies. Therefore, a purring cat certainly is symbolic of affection and companionship. However, since we understand intuitively that cats purr when they’re content, we associate purring with contentedness and satisfaction. Therefore, a purring cat in your dream can symbolize that same feeling of fulfilment. The key to interpretation is in the context. For instance, a life-size cartoon kitty sitting atop a mound of spaghetti and meatballs and purring is nothing akin to a kitten purring in its mother’s birthing box.

Dreams about a mama kitty 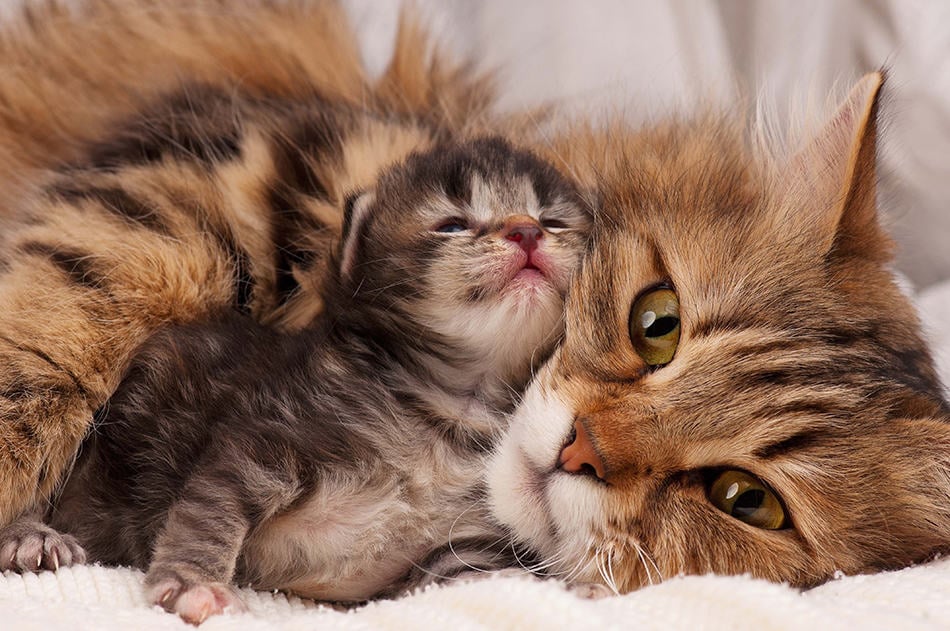 Mama kitties are special kitties, in part because of the feline association with feminine sexuality and therefore fertility. Mama cats are known to be fiercely protective, in part because their survivor instincts are on literal steroids. So, a mother cat is always associated with feminine strength and wisdom as well as the divine feminine spirit. Depending on the breed of the cat in your dream, the mama cat in particular could be quite a formidable foe. She could represent a great danger for you if you don’t give her the respect she’s owed. Be mindful of the inherent power of feminine strength and a mother’s ferocity when protecting her young as you go about interpreting this symbol of divine femininity. 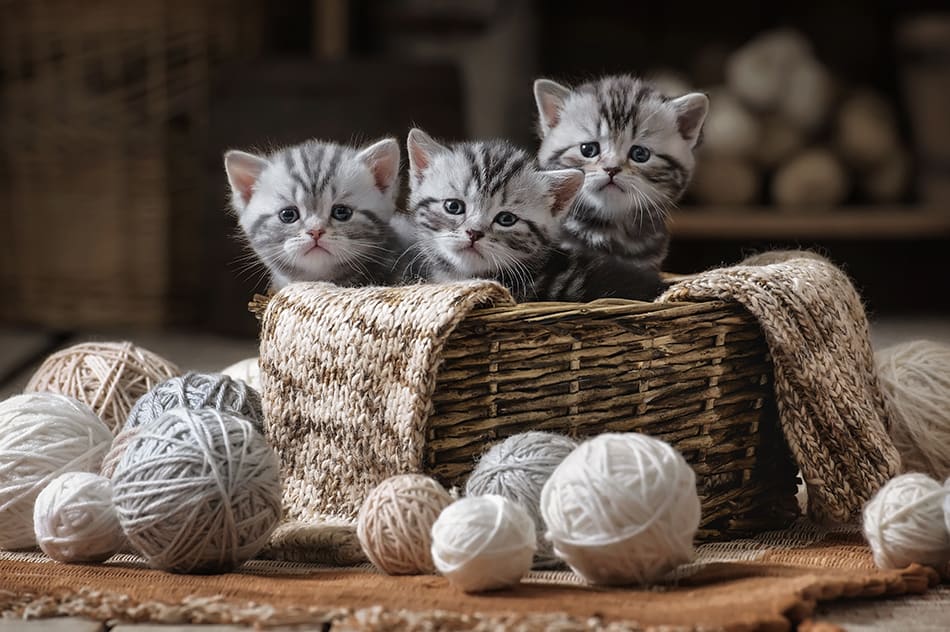 Dreams about kittens should be uplifting and happy. If not, you don’t need a dream interpreter to tell you something’s seriously wrong. If you’re dreaming about kittens sleeping or purring, see above for the best interpretations. Other than sleeping and purring, kittens do little other than eat and play. So, we’ll cover those activities in case that’s what you are dreaming about. Kittens who are still nursing are engaged in a primal act of maternal nourishment. If the kittens in your dream are nursing, they are getting what they need from the mother. This could mean you also feel that same sense of nourishment from your situation. If not, pay attention to the mother. Her behavior may give you more of a clue how to interpret the kittens. Kittens playing together should be seen as an affectionate symbol of companionship. Even if they are “attack cats” in training, kittens at play never mean any harm. If you’re dreaming about kittens playing, you are a happy dreamer indeed.

We dream about cats quite frequently because they’re one of the animals that’s closest to us. We feel like we have a window into their world because of the pets we keep as company. Due to that closeness, we may tend to dream about cats more often than other animals. Hopefully this guide has helped you determine the underlying meaning in your cat dream. 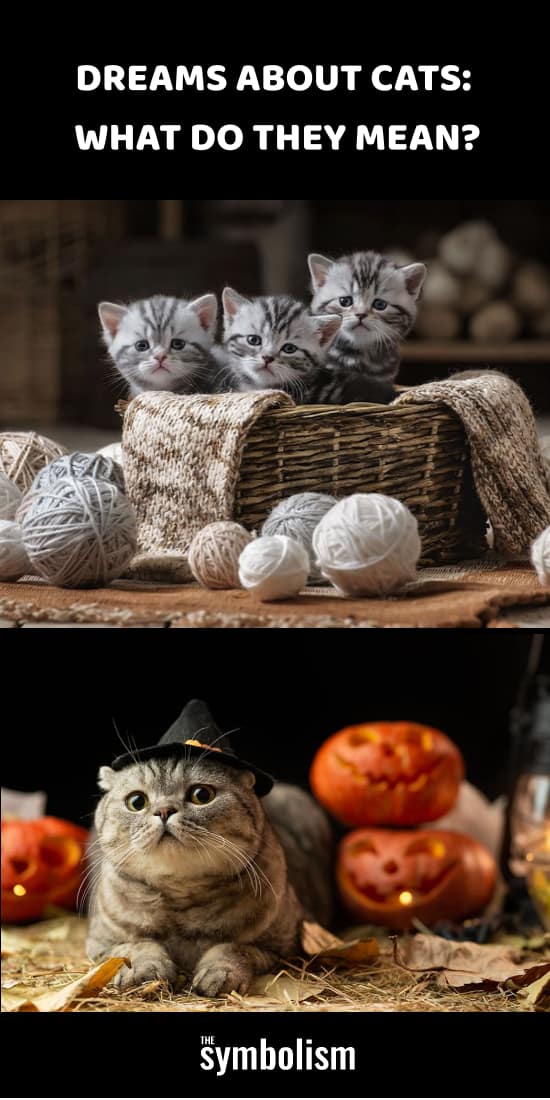