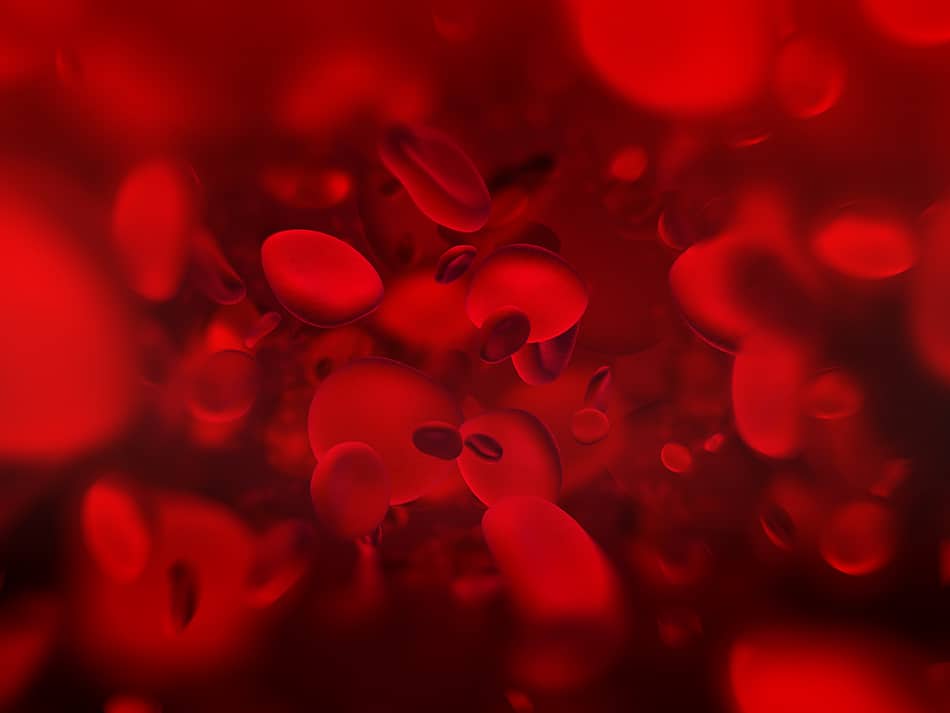 Some people faint at the sight of blood. It makes you wonder what happens if they see blood in their dreams!

While looking at blood is often considered unpleasant in waking life, your dreams can make you look at things you would prefer to avoid. Fortunately, the symbolism of blood in dreams is not always as bad as it might appear.

Blood dreams symbolize engagement with some of the most primal parts of life. The easiest interpretation of a blood dream is that you might get your menstrual period soon, if that is a physical possibility for you.

Blood is a basic requirement for the operation of any human body, however, so it can symbolize your basic life force. It can also symbolize your link to your ancestors or your religion. 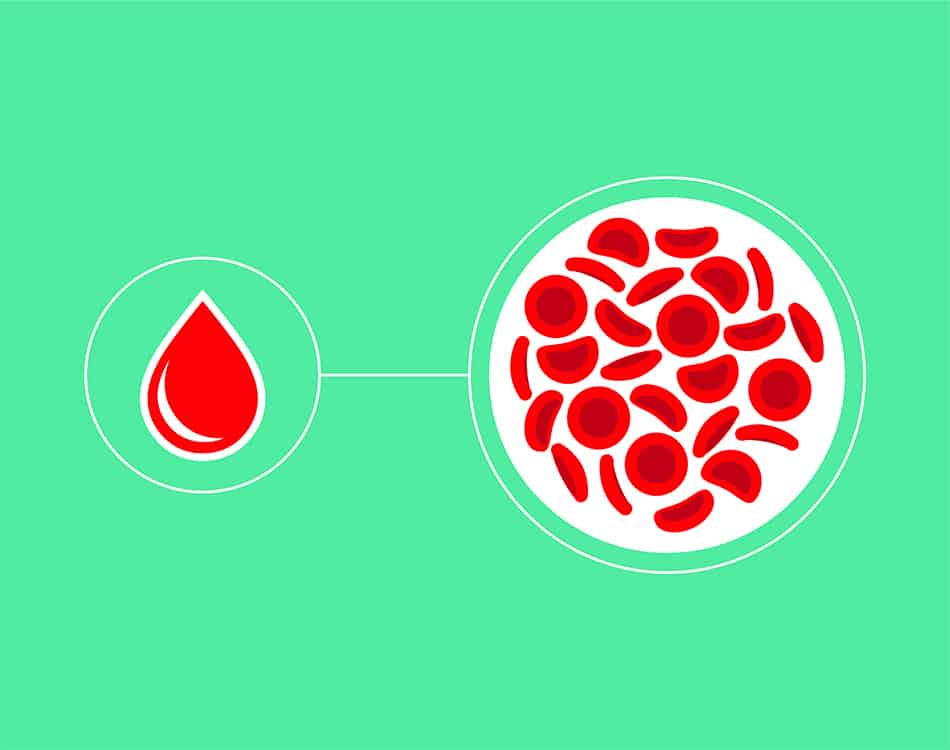 Sometimes you best understand something by looking at what you are without it. If you lose too much of the blood in your body, you are dead.

Early observances of Halloween had to do with honoring the dead, as noted at History.com. While today the focus of Halloween is more on wild costumes and decorations that can include fake blood, perhaps the element of interest in death is still there even if it is not talked about as openly. Your dream of blood could similarly symbolize anxiety about death.

Dreaming of a vampire sucking your blood could symbolize that you feel some person or situation in your life is stealing your energy. Whether or not blood-sucking vampires are real, psychiatrist Judith Orloff has written extensively about “energy vampires,” people who are emotionally draining to the others around them.

To dream of blood can also signify that the life force has left a person or a situation. For example, the title of Bob Dylan’s album Blood on the Tracks, which is full of intense breakup songs, could refer to the lifeblood having left a relationship.

The phrase “blood relatives” refers to relatives with whom you share genetic material. People can get involved in tracing their family history, and sometimes they may refer to their family tree as a “bloodline.”

Dreaming of blood can therefore symbolize that you are interested in learning more about your heritage. You may also be interested in connecting with your relatives, especially those you may not know well – you have blood in common with them if nothing else.

While blood ties can be used to find common ground with people you are otherwise very different from, blood ties can also be used to exclude people in a family context. Adopted children or stepchildren may feel that they are not treated as well as the “blood” children in their family, for example, and a dream of blood could refer to a situation like this.

The idea of bloodlines can also be used in a racist context, where people are concerned about keeping their bloodline pure from mixing with people of other racial or ethnic backgrounds. A dream of blood could therefore symbolize that you feel that others are mistreating you on account of your racial or ethnic background. Alternately, it could symbolize that you are mistreating someone else in that way and need to look at your own behavior.

In the Christian religion, the rite of the Eucharist, also known as Holy Communion, involves consuming bread and wine in commemoration of the Last Supper Jesus Christ shared with the Twelve Apostles. The different denominations within Christianity understand the relationship between this bread and wine and the body and blood of Jesus Christ in different ways, but they broadly agree that the wine has a connection with the blood of Jesus Christ at least symbolically, though some take the connection further than that, as described at Christianity in View.

There is also broad agreement within Christianity that Jesus Christ was crucified and that the blood Jesus Christ shed on the cross was necessary for the redemption of humankind. Jesus Christ and many of the first Christians came from the religion of Judaism, so some of the Christian symbolism around the crucifixion, such as referring to Jesus Christ as the lamb who was slain, references the animal sacrifices that were used in early Judaism.

NPR reports that the Jewish practice of animal sacrifice mostly ended in the year 70, when the Second Temple in Jerusalem was destroyed. Judaism, like Christianity, however, contains internal differences, and a minority group within Judaism still pursues animal sacrifice.

Dreaming of blood could therefore symbolize religious concerns, especially those related to redemption for some sin you have committed. For additional comments on dream symbolism related to Holy Communion, see What Does It Mean to Dream of Glass?

Some variants of Christianity talk about the blood of Jesus Christ more routinely than others do, but those that do sometimes refer to the blood as cleansing. This typically means cleansing on a spiritual level – on a physical level, blood can be messy!

If you have a uterus, however, the bleeding of the menstrual cycle is a routine cleansing process by which your body gets rid of things it does not need. When you deep clean your house, sometimes things look dirtier before they look cleaner, and maybe menstruation is like that.

Dreaming of blood could therefore symbolize that you are doing something that will bring purification or cleansing in the long run, even if things look messy at the moment. As in the Rolling Stones song, you may need to just let it bleed.

In Shakespeare’s play Macbeth, Lady Macbeth frantically washes her hands after being involved with a murder, saying “Out, damned spot!” This is a particularly dramatic illustration of the saying “blood on your hands,” which means you are guilty of some misdeed.

Dreaming of blood could therefore symbolize that you feel contaminated by something you have done. You may see no way out of the guilt you feel.

Obsession about contamination, whether or not the contamination is physical, can be a symptom of obsessive compulsive disorder, according to the International OCD Foundation. Even if your concerns about guilt or contamination do not reach that level, you may still need to think through whether they are founded in reality.

Many diseases are diagnosed by blood tests, so dreaming of blood can reflect that you are in the process of trying to get a medical condition diagnosed or managed. If you have specific concerns about symptoms involving blood, like excessive bleeding or blood clots, your dream could very well reflect that.

Some diseases are spread by blood, so healthcare workers must take precautions to avoid contamination. If you are a healthcare worker and recently had a needlestick scare, your dream of blood could be processing that experience. 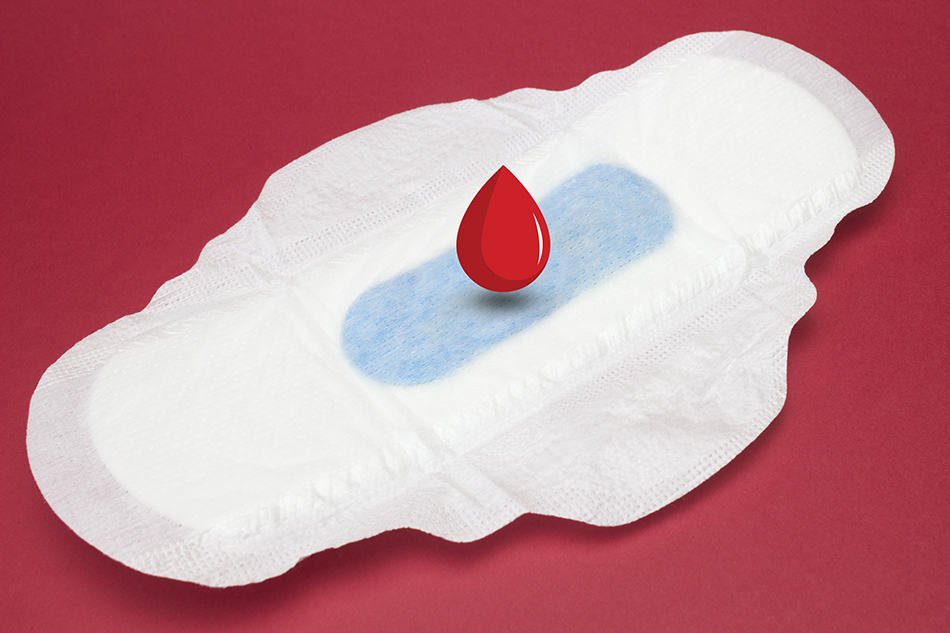 If you menstruate, just about any dream involving blood can indicate that your menstrual period is approaching. If you dream about menstrual blood specifically, you might get a physically obvious answer to what your dream was about pretty soon.

If you are pregnant and do not want to menstruate at the moment because that might mean there was a problem with your pregnancy, a dream of menstrual blood could reflect anxiety about your pregnancy. As always, this website does not provide medical advice, and you need to discuss any medical concerns you may have about your pregnancy with a healthcare professional.

If menstruating is not a physical possibility for you, maybe your dream of menstrual blood is picking up on the menstrual period of your partner or some other significant person in your life. 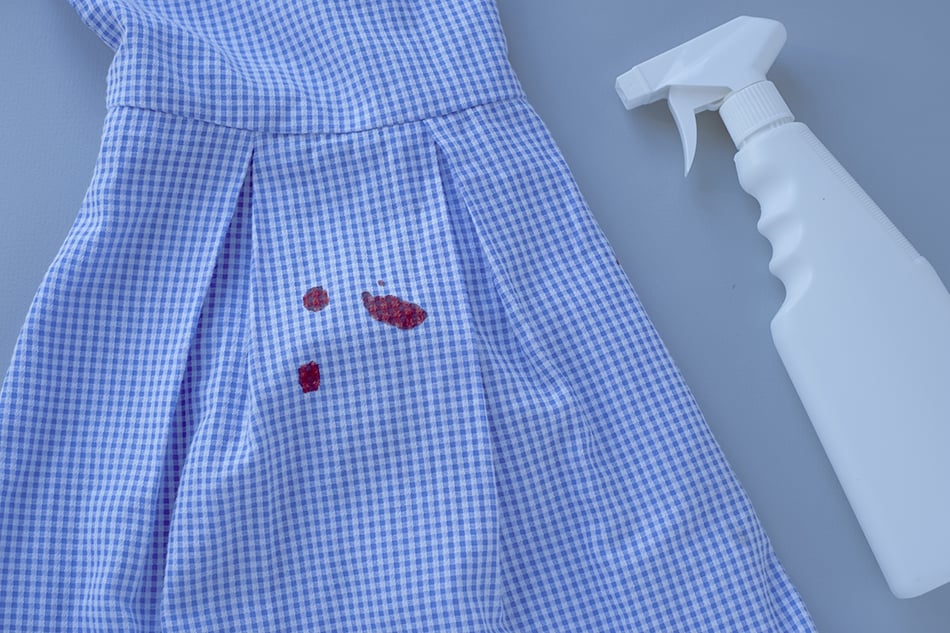 Dreaming of bloodstained clothes might be one of the more obvious dreams linking blood to menstruation, as most people who menstruate have had an accident of bleeding on their clothes at some point.

If menstruation is not a possibility for you, a dream of bloodstained clothes could symbolize that you are worried about something you are trying to hide becoming so obvious that you finally get caught, especially if the dream involved your clothes becoming stained because you were committing a violent crime.

Dream of someone bleeding 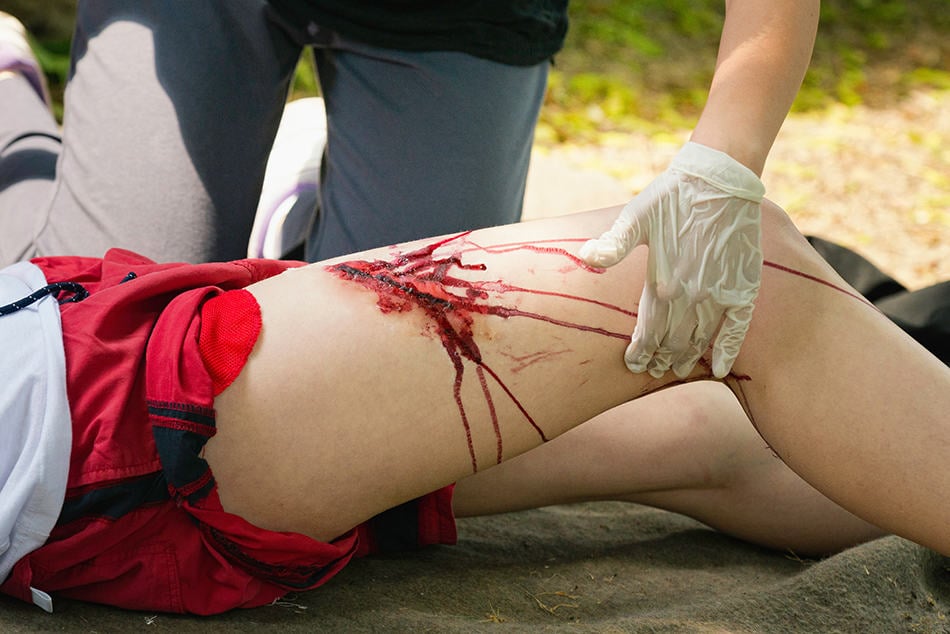 Dreaming of someone bleeding could symbolize that someone in your life is suffering, especially if the bleeding person in your dream is someone you know in waking life.

Interpreting your dream might therefore go in the direction of trying to understand how you handle it when you see people in pain. In your dream, did you try to help the person who was bleeding, or did you feel you did not have the ability to do so? 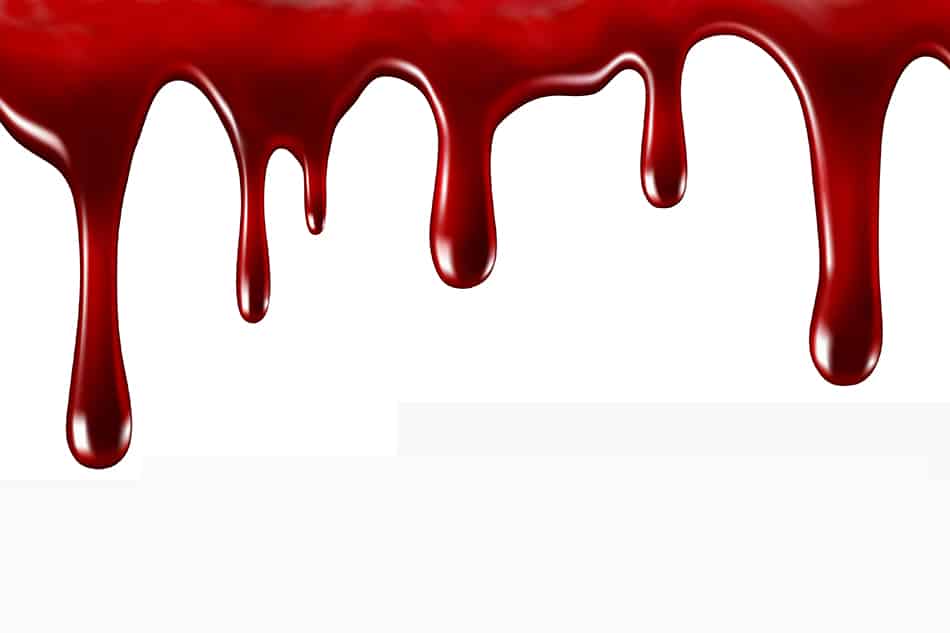 In interpreting dreams about blood dripping, the most important question to answer might be where is the blood dripping from? If you cannot identify the source of the blood in your dream, this could symbolize that there is similarly some problem in your life that has a shadowy feel to it.

Dripping blood is serious business, though, so it may show that something you have been trying to ignore needs to be addressed immediately. If anyone involved in the situation is trying to hide something, they may not be able to do so for much longer. 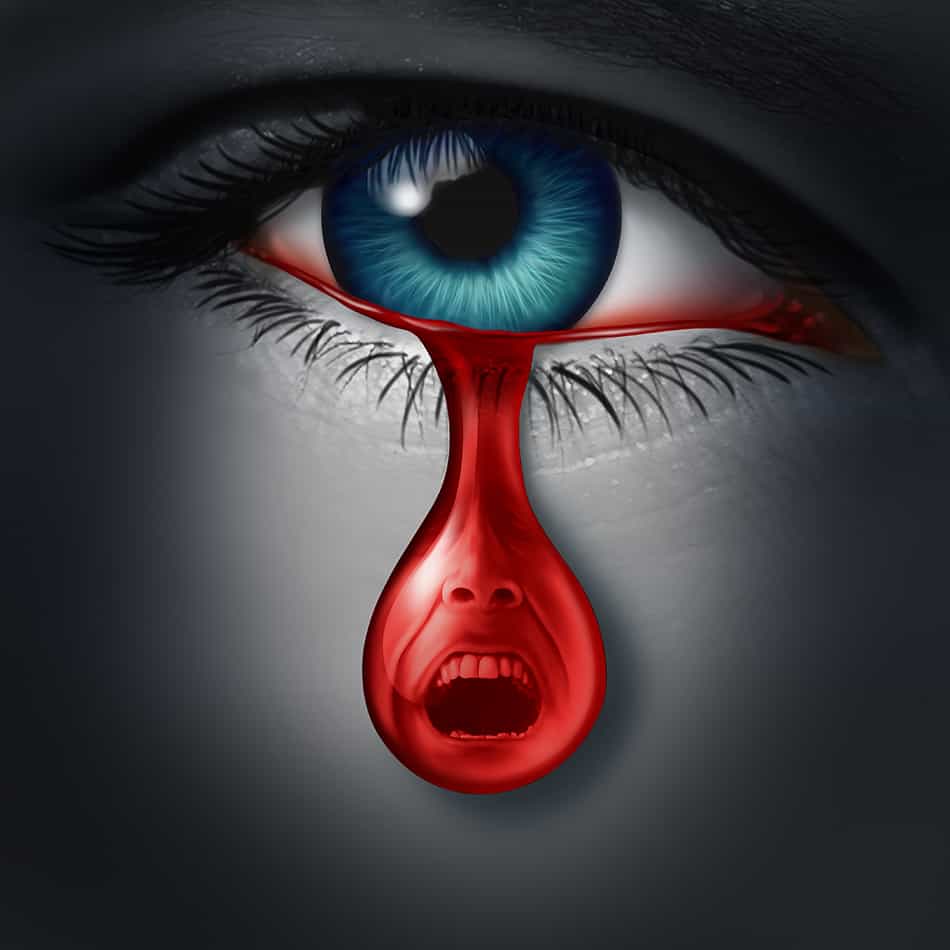 A bleeding eyes dream can symbolize that you are upset about the kinds of things you see on a daily basis. Maybe you need a good cry but don’t know how to make it happen, as in the Jackson Browne song “Doctor My Eyes.”

Alternately, the physical demands of extensive computer and smartphone use can be hard on your eyes. As always, this website does not provide medical advice, and you need to see a healthcare professional for that, but if you have a dream of your eyes bleeding, you might think about whether you have noticed any discomfort in your eyes that could be worth getting checked by a healthcare professional.

Finally, Encyclopedia.com describes reports of incidents where statues of Jesus Christ, the Virgin Mary, and saints appear to bleed from the eyes or other places. These incidents have at times been associated with healing, so that would be a connection to consider if the emotional atmosphere of your dream of bleeding eyes was overall positive.

Dream of a nosebleed 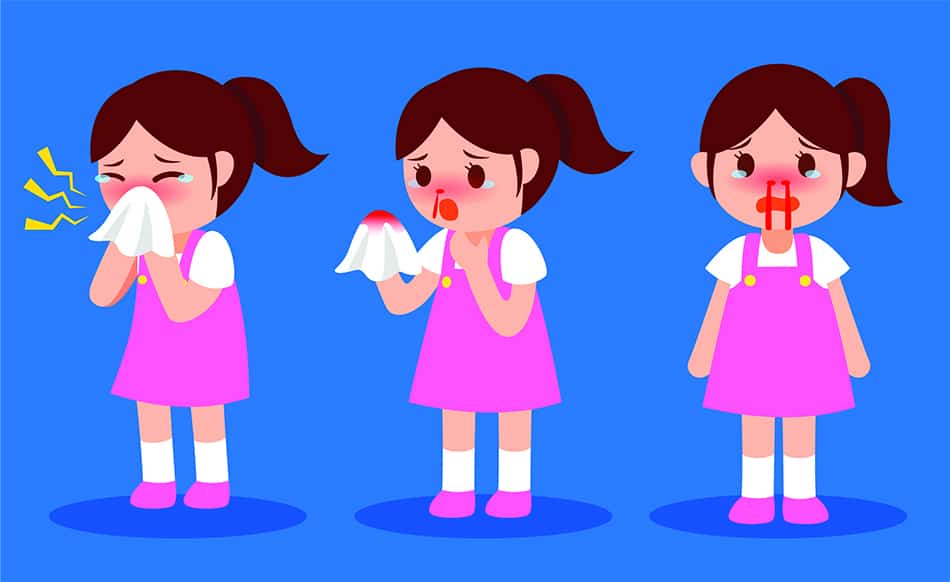 The saying “nosebleed section” refers to the highest seats in a stadium or theater, which have the most distant view of an event but usually cost the least, as reported by Farlex Dictionary of Idioms. Usually these are not truly at the extreme high altitudes that can actually physically cause nosebleeds, but that is where the saying comes from.

Dreaming of a nosebleed could therefore symbolize concerns about your status relative to others in a couple of different ways. If you are relegated to sitting in the nosebleed section, you could feel like you are less than the people who can sit right in front of the stage. Alternately, if you are up on a high mountain or otherwise physically elevated, you could feel like you have a higher status than others.

Your dream of blood could have alerted you to a problem in your life that needs to be addressed. As blood is involved with some very serious issues, the problem could potentially be substantial.

Your blood dream, however, could also show that your situation holds the potential for renewal, no matter how messy it may seem to be at the moment. If you still have blood pumping through your veins, you are not dead yet, so you still have the opportunity to work things out.