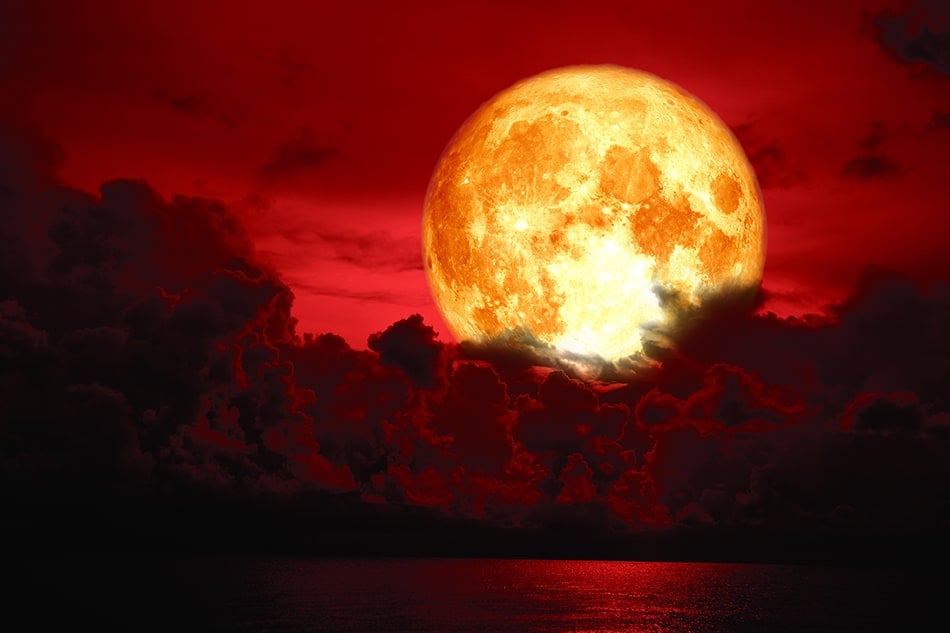 Space.com reports that a blood moon occurs during a total lunar eclipse, which can only occur at select full moons when the moon’s orbit coincides with that of the sun and the Earth. Earth passes between the sun and the moon, causing the moon to be in Earth’s shadow.

Meanwhile, Space.com continues, “a little bit of light from Earth’s sunrises and sunsets (on the disk of the planet) falls on the surface of the moon. Because the light waves are stretched out, they look red. When this red light strikes the moon’s surface, it also appears red.”

Alternately, the moon is associated with menstruation, and so is blood, so a blood moon dream could symbolize that your menstrual period is approaching. 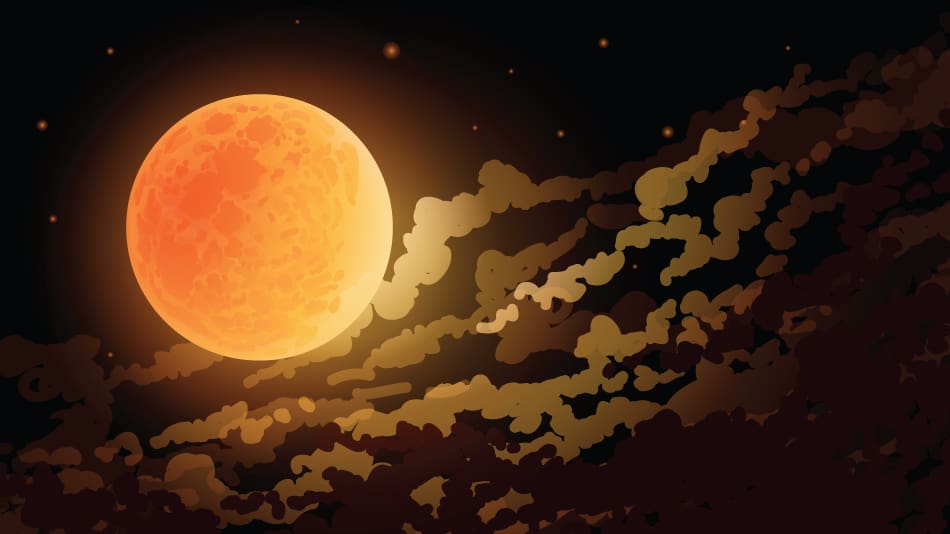 A blood moon is featured in some stories of apocalyptic events. A big example of this is the book of Revelation in the Bible, which mentions a blood moon near the beginning of a series of destructive events on Earth.

The well-known song “When the Saints Go Marching In” summarizes the events of the book of Revelation and includes a verse that refers to the blood moon.

A blood moon dream could therefore share the general symbolism of apocalyptic dreams, such as going through a major transition, feeling a lack of control over your life, or something hidden being revealed.

The book of Revelation specifically includes a component where people are judged, and those who do not have their names in the book of life are thrown into the lake of fire. A blood moon dream could therefore symbolize a situation where you are anxious that you will be judged and found to be not good enough.

Alternately, a blood moon dream could symbolize your feelings of vindictiveness if you are convinced that someone who has wronged you deserves to be punished with all the dramatic flair found in the book of Revelation. Any apocalypse is about the unveiling of the truth, and you may want the truth about your enemy to come out.

If you menstruate, a blood moon dream could definitely symbolize that you are going to get your period soon. This is true for just about any appearance of blood in a dream, as noted in blood dream symbolism.

As discussed in moon dream symbolism, the moon is also associated with menstruation. The length of time between one new moon and the next, which is about 29.5 days according to The Old Farmer’s Almanac, is similar to the length of a human menstrual cycle.

If you do not menstruate, a dream of a blood moon could symbolize the menstrual cycle of your partner or another significant person in your life.

Dream of seeing a blood moon while indoors 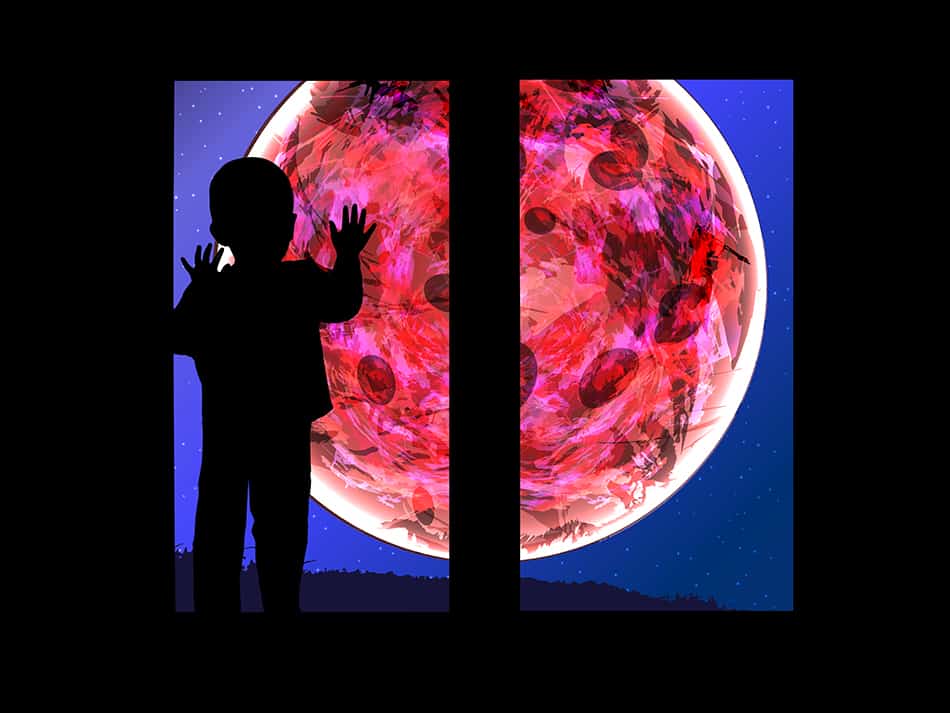 If you dream of looking out the window and seeing a blood moon, this could symbolize a situation where you are aware of upheaval going on in the world, and it has the potential to affect you, but you also have some level of protection from the worst of the trouble.

Dream of seeing a blood moon while outdoors 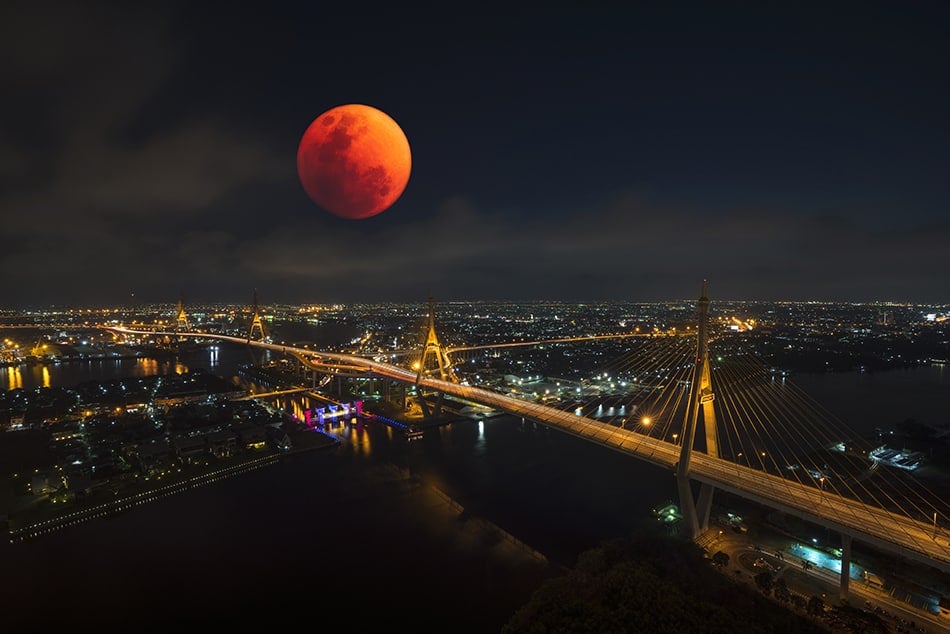 If you dream that you see a blood moon while outdoors, when you are not in a car or house protecting you from the elements, this could symbolize that you have to directly confront something that scares you. Sometimes the blood moon hangs low in the sky in a way that can seem creepy and even menacing.

If your dream of seeing a blood moon outdoors is overall a pleasant experience, however, this could symbolize that you feel connected with nature, especially with your own more primal side.

Dream of a blood moon that is dripping 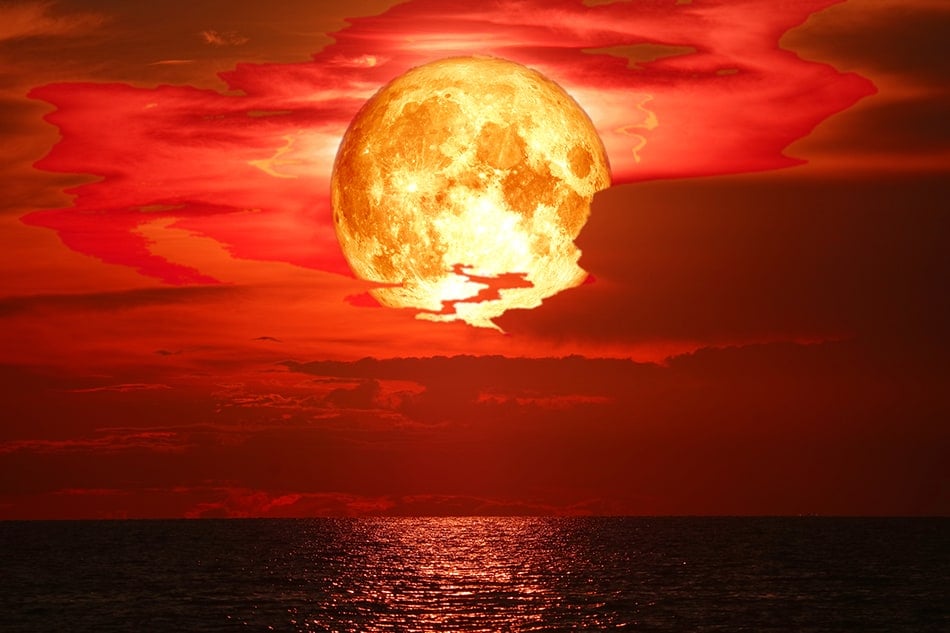 If you dream of a blood moon that appears to be dripping blood or otherwise doing something that even the weirdest-looking blood moon in waking life would not be capable of, this would suggest that you feel like the world has become totally out of control and unpredictable.

In an apocalyptic event of this magnitude, it would be fair to say that life is not playing by its normal rules. Such a dream could symbolize a breakdown in your life, but it could also hold the opportunity to build something better in its place.

While a blood moon may look bizarre, it is simply a normal variation on a lunar eclipse. Lunar eclipses usually happen about twice a year, though not all of them are total enough to produce a blood moon.

Astrologers often interpret an eclipse as a time for something to be revealed. This is not far from the meaning of the word “apocalypse,” which translates in Greek to “take away the covering of something that has been hidden,” according to The Jungian Center for the Spiritual Sciences.

It, therefore, makes sense that blood moons could be associated with apocalyptic scenarios. Though your blood moon dream is not likely to mean the end of the world, it could speak to something hidden being revealed on a more mundane level.