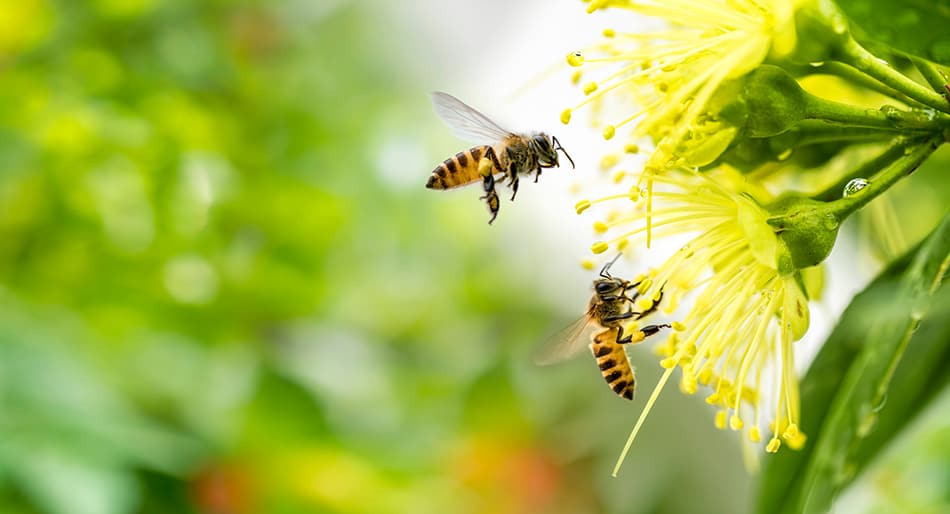 Dreaming of bees can be scary, especially if they are trying to sting you.

Bees can symbolize danger, as they trigger fear of being stung. In a sexual context, though, sometimes people want to be stung, so dreaming of bees can also symbolize sexual desire.

Not all bees get to have sex, though, as some of them are relegated to the role of sexless workers. Dreaming of bees can therefore symbolize that you are involved in a hierarchical situation where the winner gets all the spoils.

A bee dream can more broadly symbolize that you feel like you are tied to your role in society as a hard worker. You might have trouble differentiating your own thoughts from those of the “hive mind.” 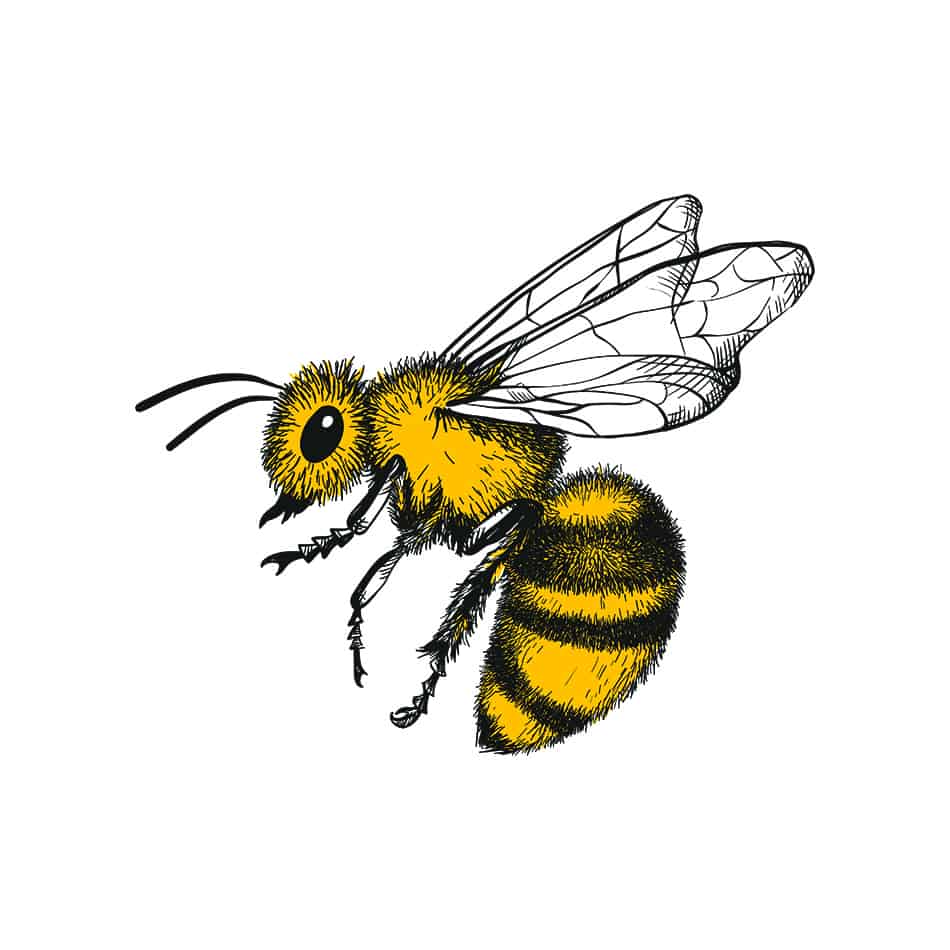 Bees can symbolize danger, because the idea of getting stung by a bee can be scary. Oddly enough, a lot of the signs that urge caution on roads and elsewhere use the same yellow and black color scheme common to the stripes of bees.

For many people, the idea of getting stung by a bee might be worse than the actual experience of it, but there are some people who have life-threatening allergies to bee stings. Whether or not you personally have a risk of anaphylaxis, bees can be aggressive, and there is a sense of being threatened by something that is not rational in the same way you are.

Advice blog Captain Awkward regularly uses terms like “the house of evil bees” to refer to abusive situations that the letter writer is encouraged to leave.

Salt Lake Magazine reports the story of how the U.S. state of Utah came to be called The Beehive State. Many of the settlers of Utah were members of what is now known as The Church of Jesus Christ of Latter-day Saints. Their sacred text, the Book of Mormon, contains a story of a miraculous voyage that brought the honeybee to North America.

When it came time for their own great voyage to settle Utah, these people were inspired by bees’ industriousness and cooperative work, as they recognized that they too would have to work hard to take on their new desert environment.

Dreaming of bees could therefore symbolize that you feel like you are working hard. Do you ever get any honey as a reward, or are you just being exploited by others?

Bees have a very hierarchical social structure. Each colony of bees has only one queen bee, and she is the only female bee who gets to reproduce. The rest of the bees are either drones, male bees who fertilize the queen’s eggs, or worker bees, female bees who do not mate and instead work to maintain the colony.

A dream of bees could therefore symbolize that you are involved in a winner-take-all situation where there is room at the top for only one person. You could be actively fighting with others to be the queen bee – or, maybe you’re not even interested in becoming the queen bee, but the queen bee is coming after you because she (or he) sees you as a threat.

Bees are known for their “hive mind,” where they seem to operate with a collective intelligence, as discussed in Bee Culture.

Dreaming of bees can therefore symbolize a situation where you and others seem to think as one. On the good side, it could refer to people coming together, especially over the Internet, to solve problems. It could even refer to experimenting with things like telepathy or psychic reading.

If the emotional atmosphere in your dream is negative, though, this could symbolize a situation where you feel you need to suppress your own thoughts and observations to fit in with the crowd.

Bees are known for pollinating flowers, and this act is analogous in some ways to sperm fertilizing an egg. Dreaming of bees can therefore symbolize sexual desire and procreation.

Usually sexual intercourse is between two creatures of the same species, though, and the worker bees who pollinate flowers typically go their whole lives not having sexual contact with other bees.

A bee dream with a sexual vibe could therefore symbolize that there is something innovative about your sexual thoughts or activities. It could also symbolize the use of assisted reproductive technology.

In the context of human sexuality, typically males are thought of as the ones who can penetrate and spread their seed. Only female bees have stingers, though, and only female bees spread pollen from flower to flower, as explained by the Canada Agriculture and Food Museum.

Your bee dream with sexual symbolism might therefore speak to a situation where things are not as simple as they seem, or where the gender roles are not what you would expect.

School of Bees reports that there is a chapter in the Quran, the sacred text of Islam, devoted to bees. In this context, the spiritual meaning of bees in dreams could refer to obeying Allah (God) in the same way that bees obey their queen bee.

Many religions including Islam also have a component of human community, so the symbolism of a bee dream could also include working to support your religious community.

Dream of bees chasing you 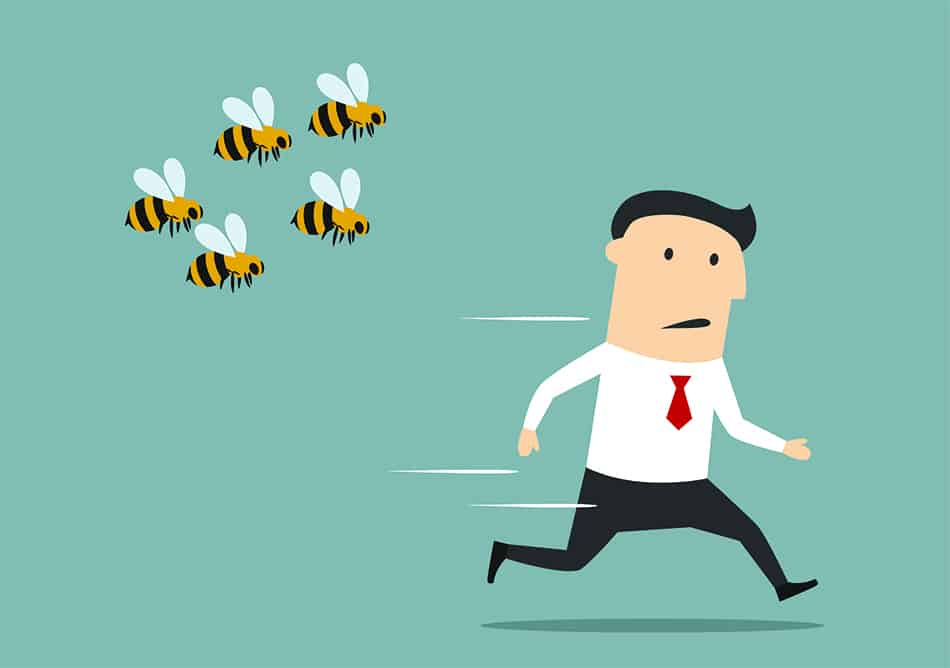 If you dreamed of bees chasing you, it probably felt scary, right? To interpret this dream, it might help if you look at why they might have been chasing you.

If you truly have no idea why the bees were chasing you, this is the scariest possibility. You feel like there is a dangerous situation in your life that you have no control over, and you could be attacked at any moment by whoever or whatever you feel is threatening you.

If you dream of bees chasing you because you attacked them or their hive, you at least have some control over the situation. What was your motive for attacking the bees, though?

If you attacked the bees just for your own entertainment, maybe you got what you deserved. This dream could symbolize that you are stirring up trouble, perhaps on social media, and it could come back to hurt you.

If the bees in your dream are chasing you because you have a food item that they want, this could symbolize a situation where you feel like other people are making your life difficult because they are jealous of you. You might feel resentful that others feel entitled to things you worked hard to earn.

If the bees in your dream are chasing you because your brightly colored clothes resemble the flowers that they want to pollinate, this could symbolize a situation where you are uncomfortable with people looking at you in a sexual way.

Dream of being stung by a bee 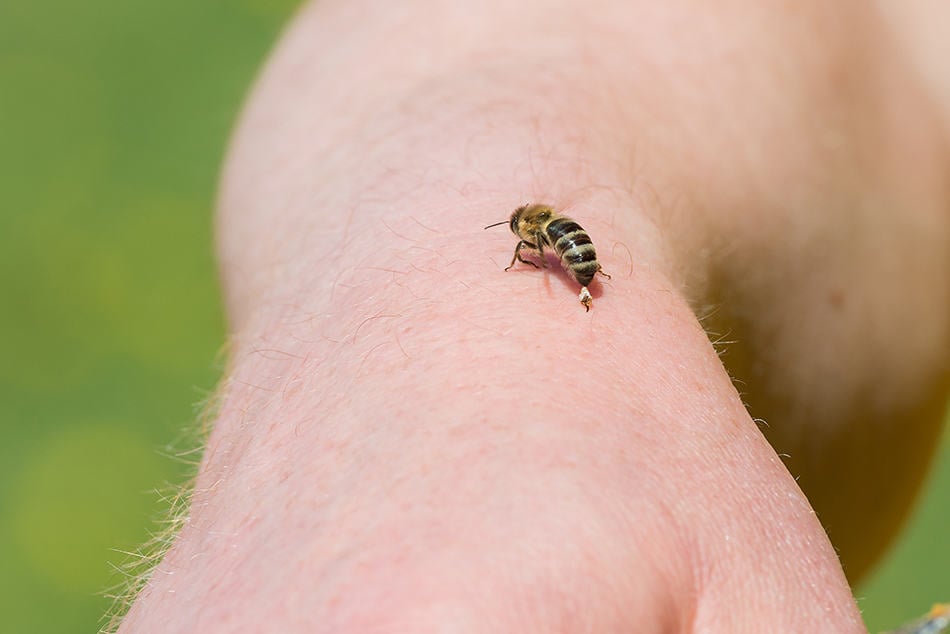 If you dream of being stung by a single bee, this could symbolize a situation where you are uncomfortable with your vulnerability in a one-on-one relationship. It could be a sexual relationship, as the image of the bee’s stinger entering your body could certainly be viewed that way, but it does not have to be; this dream could also refer to psychological or emotional intimacy with a penetrating quality.

You could feel like the other person is being overly aggressive and pressuring you to move the relationship faster than you feel comfortable. Alternately, maybe the problem is on your end – you could be so resistant to intimacy that even the gentlest invitation to open up a little feels like too much.

Dream of being stung by a swarm of bees 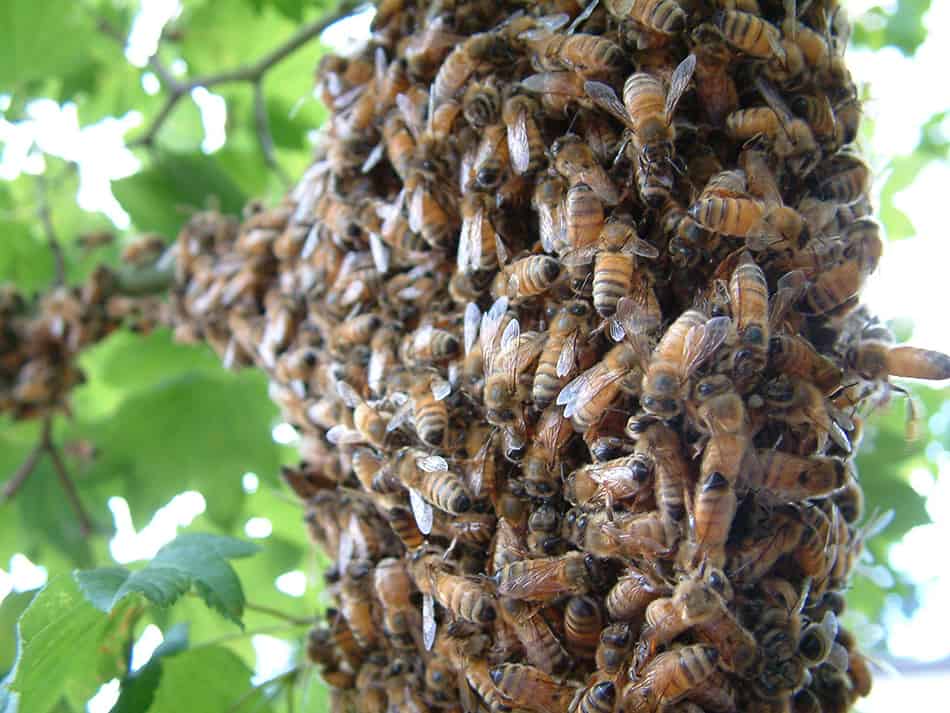 Ranker reports that being stung by a whole swarm of bees can kill you even if you do not have an allergy to bee stings. The sheer amount of venom simply shuts down your internal organs.

A dream of being stung by a swarm of bees can similarly symbolize that some situation in your life has gotten so wildly out of control that it could potentially shut down entirely.

This image is reminiscent of the infamous Tarot card Ten of Swords, which commonly depicts a man on the ground with swords in his back. In a way this level of complete breakdown is liberating in that it brings something that really isn’t working to an end.

Dream of bees landing on you 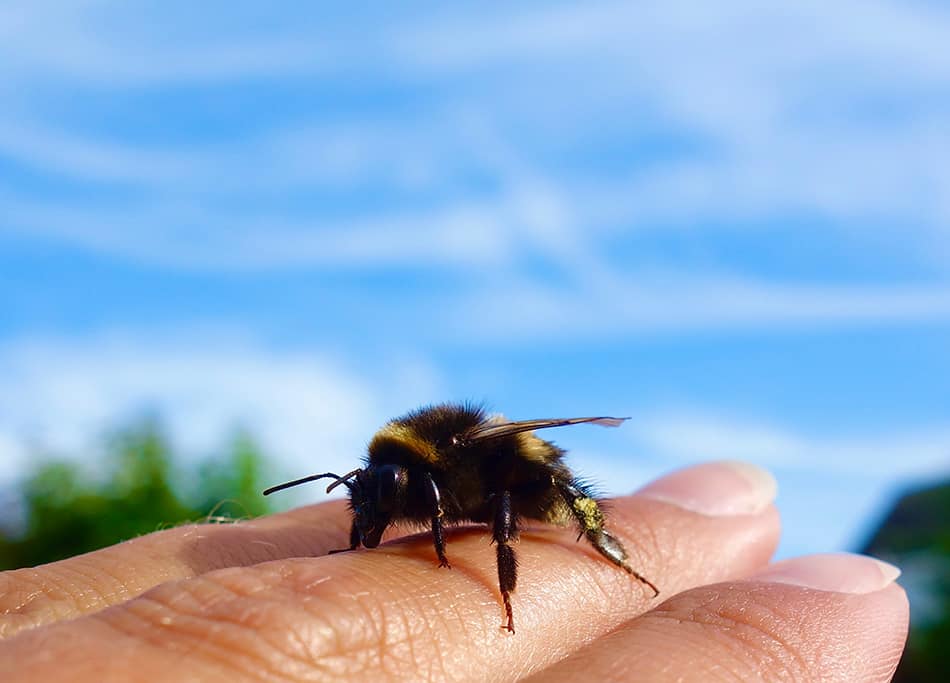 If you dream of bees landing on you in a non-threatening way, where they are not attacking you but just noticing you, this could symbolize that you are or soon will be getting more attention than you usually do. Bees, after all, notice anything that is bright and promising.

If you feel anxious when the bees land on you, this could symbolize that you have some discomfort with being seen. Maybe you are afraid that receiving attention for your achievements will also draw more attention to your flaws, or that others who are jealous will cause trouble for you.

If you feel comfortable when the bees land on you, this could symbolize that you are approaching your increase in status with confidence. You are ready for attention, even if it tickles sometimes. 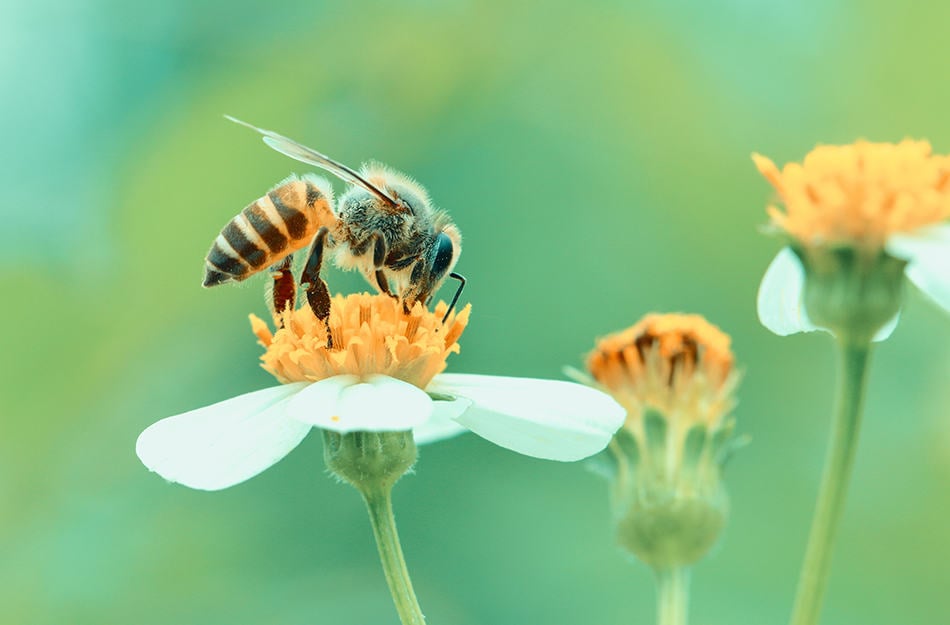 If you dream of bees pollinating flowers, this could be comforting because they are not chasing or attacking you. This component of the dream could symbolize that people in your life have good boundaries and are not interfering with you because they have lives of their own.

A dream of bees pollinating flowers, especially those of plants that produce food, could also be comforting because it symbolizes that life will go on. This is not necessarily to be taken for granted these days, especially as the Agricultural Research Service of the U.S. Department of Agriculture reports that honey bees have faced serious health threats including pests and pesticides in recent years. Meanwhile, they claim:

“About one mouthful in three in our diet directly or indirectly benefits from honey bee pollination. Commercial production of many high-value and specialty crops like almonds and other tree nuts, berries, fruits and vegetables depend on pollination by honey bees.”

The social life of bees is so strange that the only thing worse than getting stung by a bee might be being one. Each bee does not get to think through what type of relationship or career would be most fulfilling for himself or herself as an individual. Instead, they are all routed into rigid roles.

However the bees may feel about their arrangement, they are surprisingly successful with it. They don’t just manage to keep their own community afloat. They also have all sorts of flowers dependent on them for pollination. These flowering plants in turn feed humans and other animals.

The example of bees, as a symbolic tale, raises uncomfortable questions about the rights and responsibilities of individuals. Does freedom always lead to the best outcome – and, if it does not, what is the ethical response?

Your dream of bees can therefore make you think about these things regarding your relationship to your society.